Mark: So today's victim is a 2014 Subaru Crosstrek Hybrid. It had a service issue. What was going on with this vehicle?

Bernie: Yeah, so this vehicle actually came to our shop. It wouldn't start. So it was probably a little more than a service. Service and repairs. No start condition. Basically the battery was dead.

Mark: So I  guess the first question is, which battery?

Bernie: Excellent question. Yes. There are actually three batteries in this vehicle. You've got your hybrid battery located in the back, and then there are two batteries under the hood. One's a starter battery and the other's a 12 volt battery that kind of powers up the whole rest of the system of the vehicle.

So there was some testing that needed to be done, but it was pretty obvious. Basically the 12 volt battery that powers the rest of the vehicle was basically dead. And needed to be replaced. So that was what was going on with the vehicle.

You know, as far as diagnosis and how to test it, we basically just do our basic AVR system tests and pretty quickly that battery was bad. The starting battery, which was just a small little battery under the hood, that tested fine. And the hybrid battery just kind of takes care of itself in separate systems. So testing that is usually through a scan tool, but if the vehicle won't power up or start, of course you gotta start from the beginning.

Mark: That seems counter logical that it wouldn't start. How did you repair the no start issue?

Bernie: Yeah. So basically replacing the battery was the thing to do. So the way hybrids work, and I mean a lot of EVs work, is there's a 12 volt electrical system, just like in any car that's you know, non hybrid or EV car. The 12 volt battery basically powers all the things like the lights and the keys and the door locks, and the electrical systems that actually allow everything to occur in the vehicle.

So it's kind of like the base electrical system. So if that doesn't work, nothing works. So that has to work first. I'll just get a picture up here. So this is our nice bright, we call it bright green Subaru Crosstrek. Hard to miss this car for the colour of it, that's for sure. 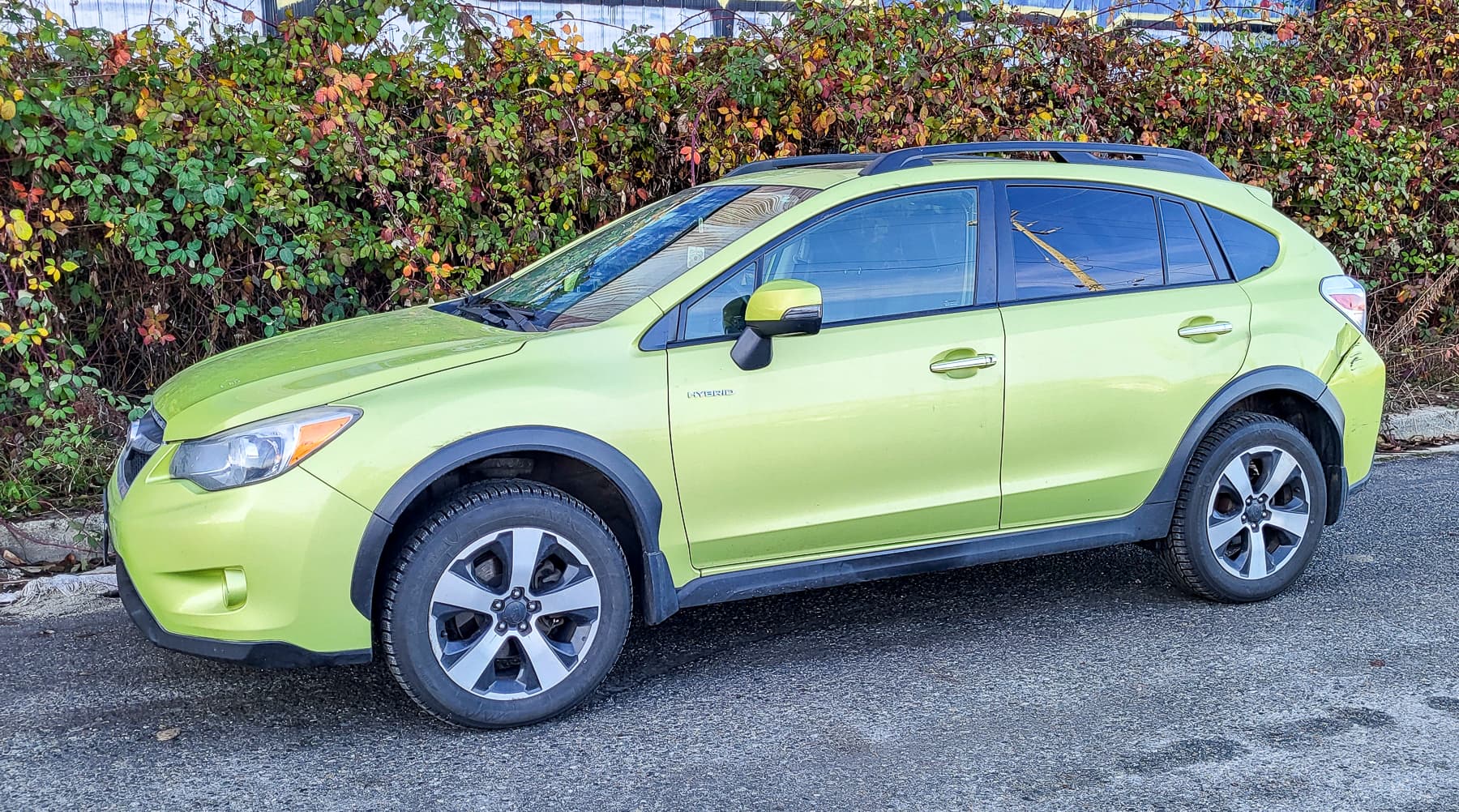 Here's a photograph of the battery that we replaced. A 12 volt battery, if you yeah, yeah. I like your laughter. It's pretty apparent this battery is very old, very corroded. These are the battery terminals where I'm moving my mouse pointer, , and you know, just that level of corrosion tells you that there's a very good chance, no electrical connection is getting through there. 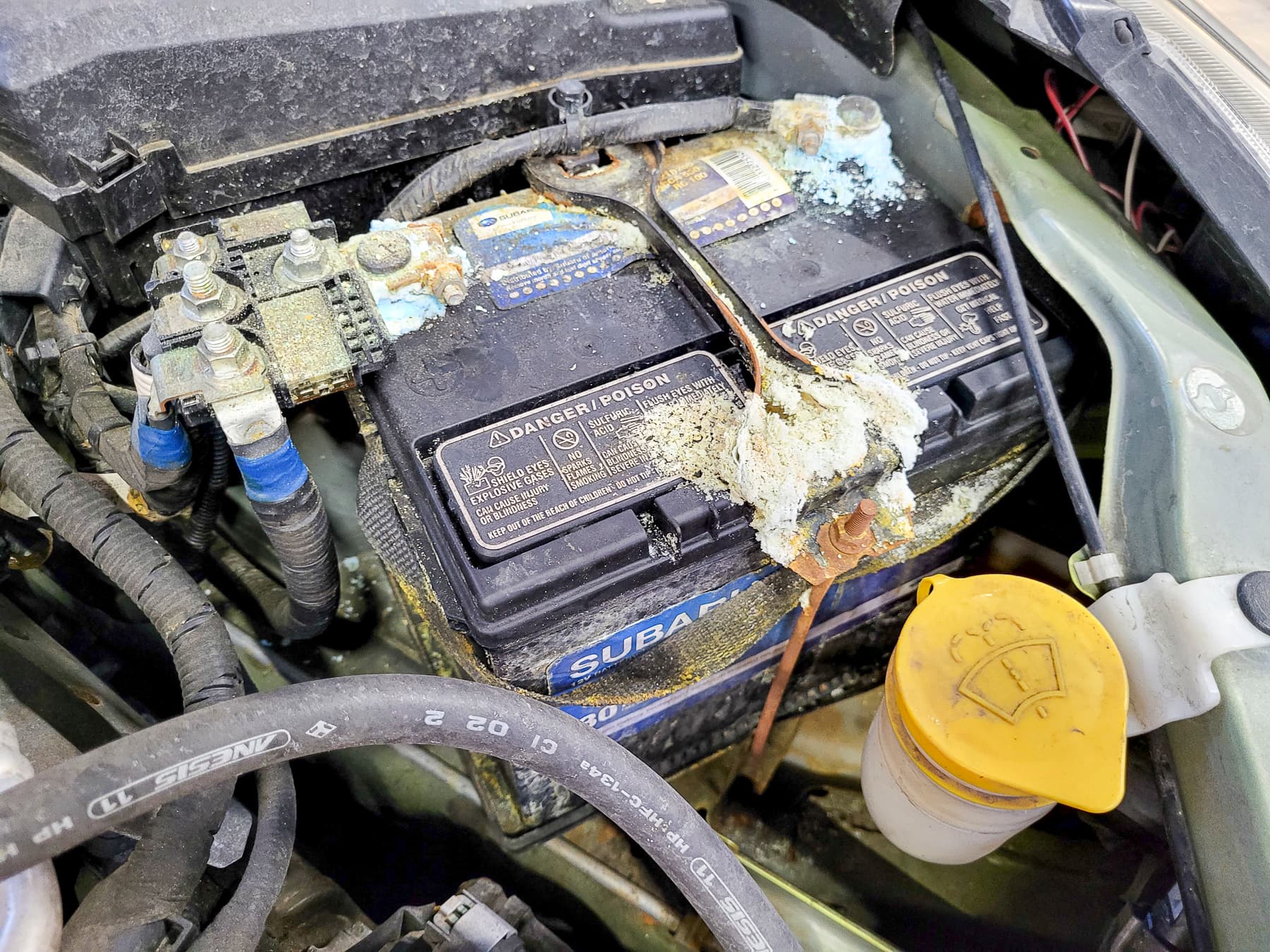 So of course, in addition to after you know, we test right at the terminals, the battery was dead. You know, after replacing the battery, there was a lot of cleaning to be done on these terminals to make sure they're okay. And then I believe we actually replaced the battery hold down too because it was corroded beyond repair.

Couple things else I will notice. You know, it used to be kind of simple where a battery would, you'd have a battery with a terminal kinda like this. This is the negative terminal here, but you can notice on this positive terminal, it comes off the battery, and then there's a bunch of nuts and bolts here, and wires going everywhere. There's an actual monitor in this piece here, again I'm moving my mouse pointer around. The computer monitors the amount of charge going in and out of the battery, and a lot of vehicles will actually monitor the positive and negative side.

So the technology over the last decade and a half has got really complicated for even battery management. Used to be, as I said, you know, you'd have a terminal on either end. Power would go in, power would go out, but now it's computer monitored, so there's added complexity everywhere.

And this is not just a Subaru thing. This is like on probably almost every make and model a car now.

Mark: Hmm. So were there any other concerns with the vehicle?

Bernie: Yeah, well I'll just actually talk about the hybrid system real quick and then we can get onto the vehicle. The other unique thing, when you look under the hood, I mean, it looks kind of like your regular Subaru, but the one unique difference is where the alternator used to be, this is the actual starter motor of the vehicle. 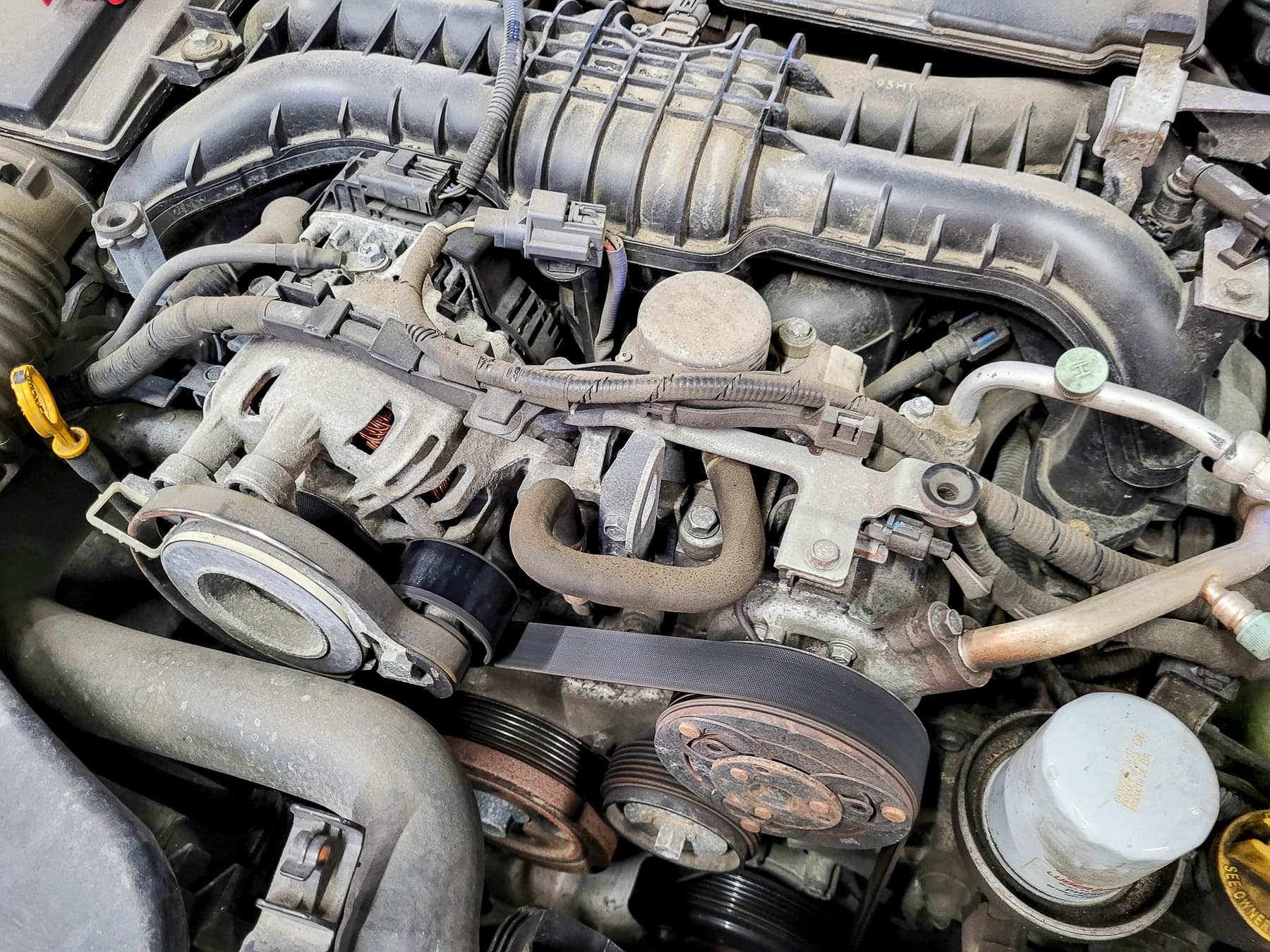 Now, I believe they call us a motor generator, but from what I can determine, I don't know that this actually charges the batteries like that 12 volt battery. I think for the most part, this is the starter motor. It's driven by a belt and it's hard to note on this picture just how fat this belt is.

But compared to a normal Subaru, I think this is about an eight rib wide belt. It's very, very large, like probably twice as thick as a normal Subaru belt with a tensioning system. Again, I moved my mouse pointer around here. This is a big enormous spring and there's two tensioners on this. So this holds this belt exceptionally tight against the crank shaft.

And were there any other repairs? So yes, of course, after we got the vehicle running we road tested it and noticed it was pretty apparent there was a couple clunks in the suspension and a very loud wheel bearing, which we figured was a wheel bearing. So we you know, did some diagnostic on that. Found one of the wheel bearings was badly worn. So we replaced a wheel bearing in a ball joint and I believe that's, it kind of took care of the car.

Mark: So not too bad for 2014 that really probably hasn't been looked after all that well.

Bernie: Yeah, well you looked at that battery and it certainly doesn't look like it's been looked after too well. I'm not sure. This was a new client to us. This is our first visit. This is a US vehicle too, by the way. So I'm not sure how many of these they sold in Canada and this is a bit of a unique vehicle to us. You know, one thing I was thinking about Subaru, they kind of keep a lot of their technology. Some of their, I want to say environmentally green technology kind of quiet.

I was in a Subaru dealer buying some parts not too long ago, and they have an EV in the show room. I go, I didn't even know Subaru was building an EV. I mean, I figured somewhere they were, but they never really hype it, never talk about it too much. It's just mostly about their off-road and capabilities and rally racing. But, you know, they do play in the hybrid and electric field. They're pretty progressive, I think.

Mark: So this is pretty unique version of a hybrid compared to the other ones, you just mentioned that?

Mark: And how are these Subaru hybrids for reliability?

Bernie: Well as I said, this is actually the first ones we worked on, so I can't really speak on the general population of Subaru hybrids for reliability. But I think, you know, generally Subarus are well built, reliable cars. And so I think you can expect these to be the same. You know, the one sort of downside I think is because it's a bit of a unique model, things will be more expensive than a Prius. I don't know what a battery pack costs for one of these, but you know, Prius, there's so many of 'em around, you could get used ones and even brand new ones from the Toyota manufacturer is not that expensive. But, you know, for this vehicle, of course being unique, it will be more expensive. But generally, I think it's a great car.

Mark: If you're looking for service for your Subaru hybrid or not. If you're looking for service for your hybrid, go see the experts in Vancouver at Pawlik Automotive. You can reach them online at pawlikautomotive.com. You can book right there. They'll call you back. They'll find out what's going on. They'll get ready for your service appointment. Or you can call them to book (604) 327-7112. You have to book ahead. They're always busy. Pawlik Automotive in Vancouver, BC Canada. Thanks so much for watching and listening. We appreciate it. Thanks, Bernie.

Bernie: And thank you, Mark. Thanks for watching.