Mark: So we're talking about a 2014 Subaru Outback that had a transmission issue. What was going on with this Subaru?

Bernie: Well, this car is brought in for a routine maintenance, but one complaint the owner had was that the transmission seemed to have a delayed shift from park into drive or reverse. It just was a bit of a delay and sometimes that's normal, but he said it seemed to be something that was a new development. So we did inspect the transmission fluid. We did a quick code scan, nothing present you know, any sort of transmission issues. The fluid was very discoloured, likely never been serviced because it's often a forgotten item. And so we recommended doing a transmission service. It says a CVT transmission. So we, we recommended a service.

Mark: So is there anything different involved in servicing a CVT compared to a regular automatic?

Bernie: Really the major difference is the fluid. You have to use the proper fluid.  CVTs have a specific type of fluid because they work much different than a traditional transmission. There's some different components inside and they require a different fluid. So that's the main difference. Otherwise we do the service the same way that we normally do. We take the pan off the transmission.

We do a very thorough service here. There are a lot of shops that don't do it thoroughly. But we take the pan off. We clean it, we replace the filter. If it's replaceable. On a Subaru, it's a wire screen. So we just cleaned the filter. We can inspect the inside of the pan, we reseal it. And then we flush the fluid with a machine where we can actually run some clean fluid into the transmission and pump the old fluid out.

Mark: So is it absolutely necessary to remove the pan?

Bernie: Well, it's not absolutely necessary. However, the big difference is that when you take the pan off, you can inspect the inside of the transmission. You can clean the pan. And a lot of times debris will develop in the sort of bottom layer of the pan. So any little metal filings. And for that matter, you know, if there's actually metal filings or any sort of, you know, hard part wear then we can actually see that. And then that gives an indication, Hey, this transmission is wearing out. There's something going on here. Either you're going to have to repair it or at least keep an eye on it, something's wearing out.

So we get to see that. This transmission fortunately had none of that. It also makes for a better service because once you clean that all out, not all the fluid drains out the bottom, there's usually a sort of a lip at the bottom where the drain bolt goes. So you're, you're leaving a layer of fluid, maybe, you know, quarter to a half an inch layer of fluid in the bottom that doesn't get changed.

And that can make a difference to the longevity of the service that we do. So let's get into some pictures here while we're at it. There's the 2014 Outback. And this is what the fluid looked like when we took it out. 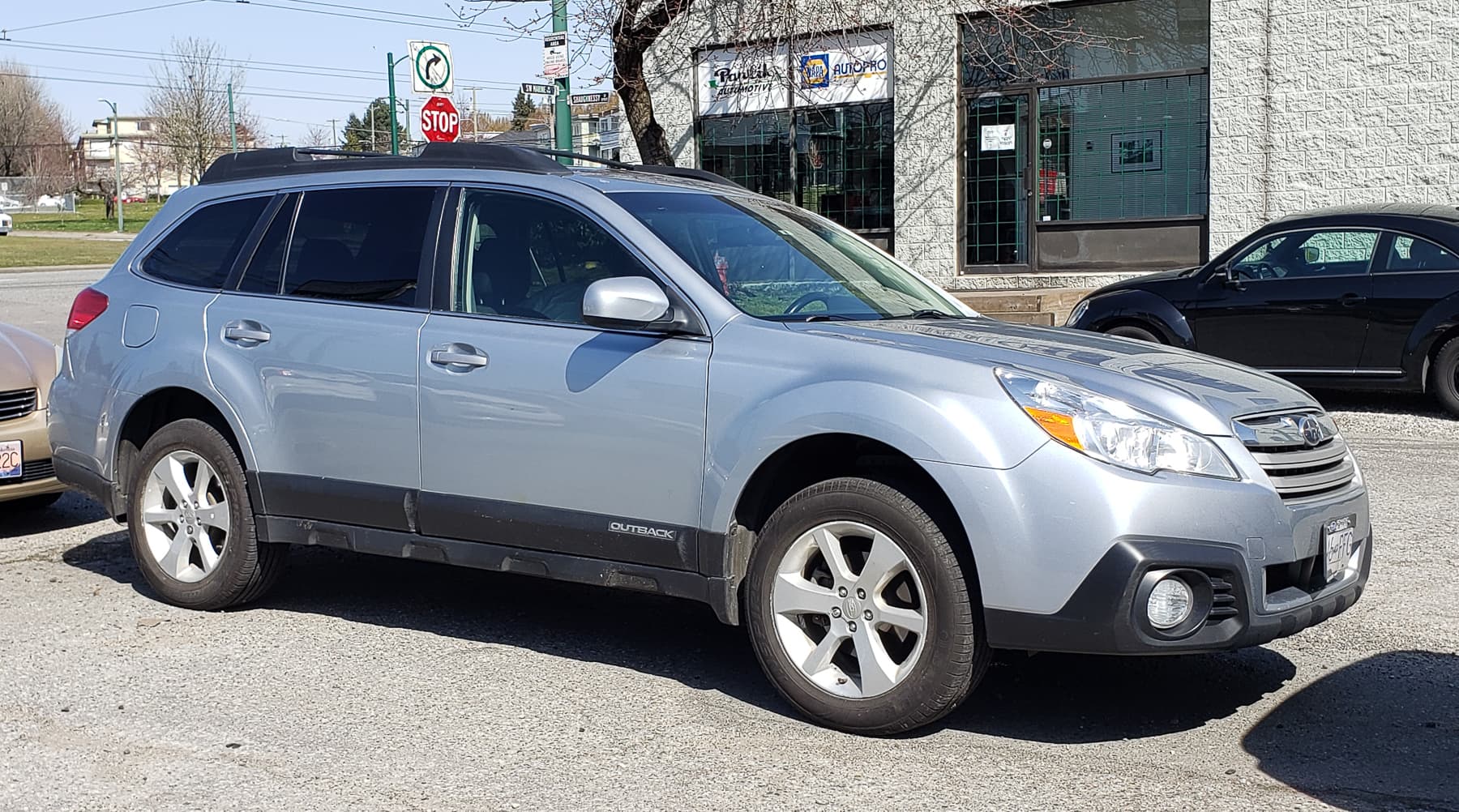 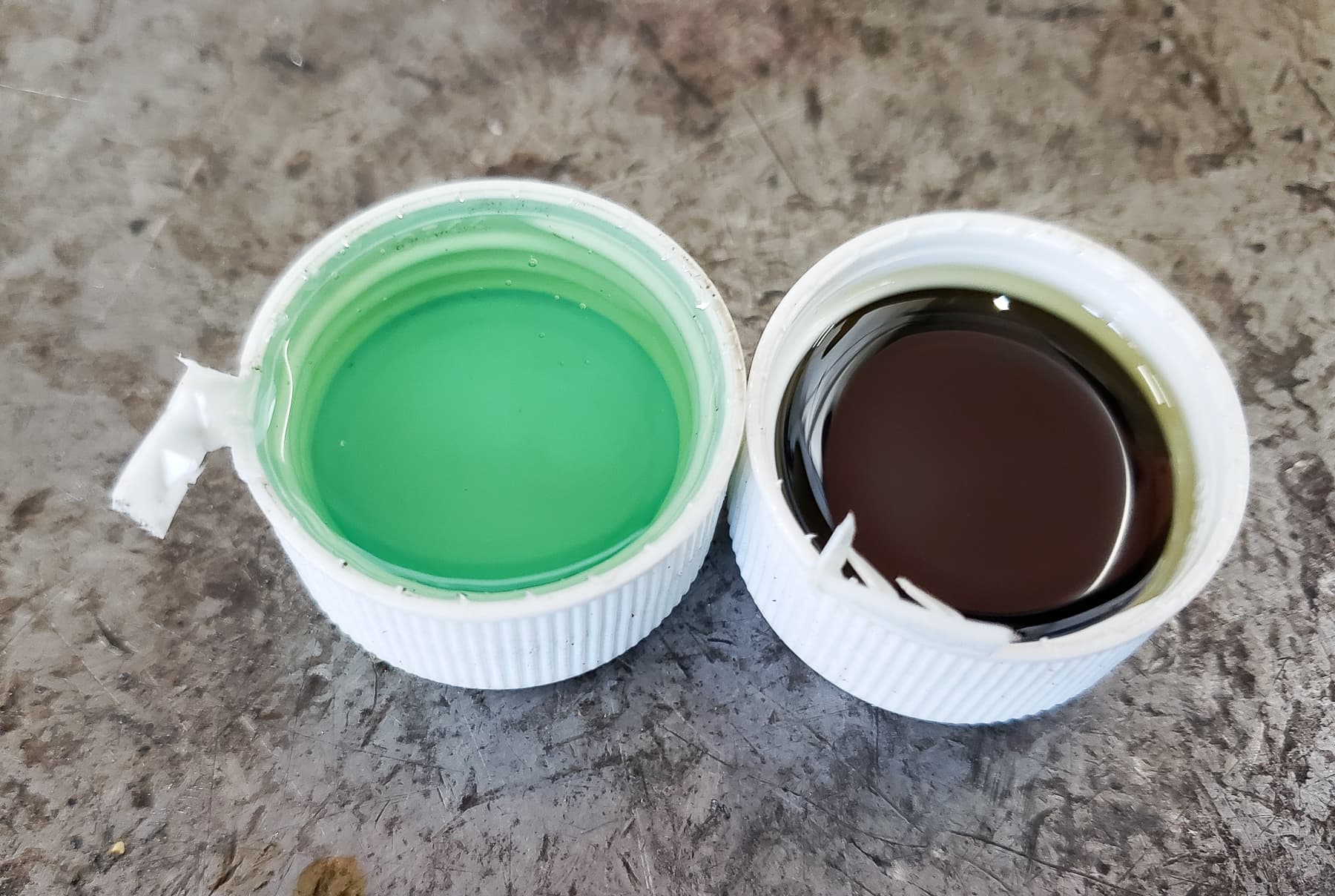 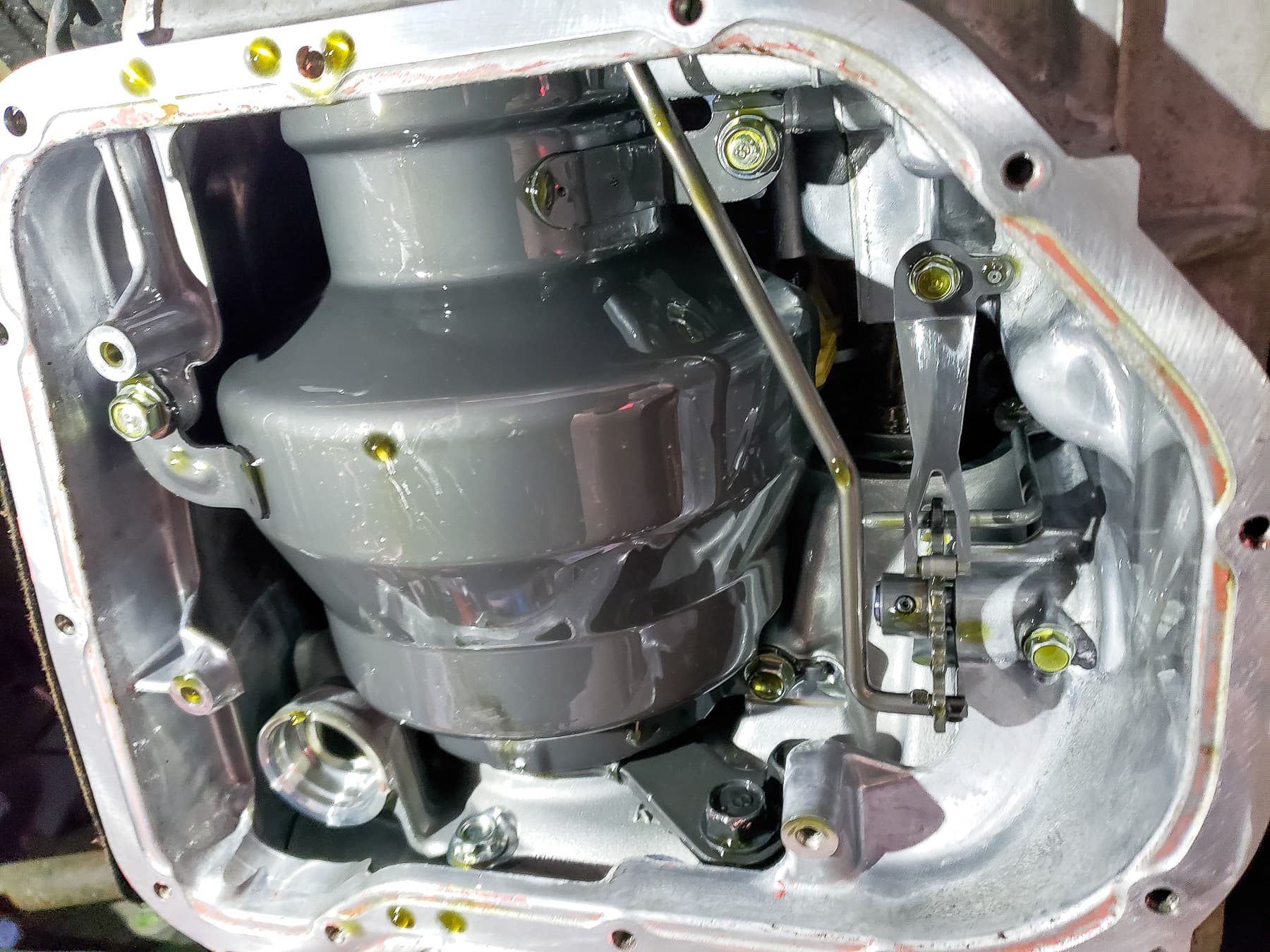 So just so you know, I mean when this fluid is new, it's clear. So that has a lot of contaminants in it, it's brown, as you can see.

Mark:  It's doing its job basically.

Bernie: Doing its job absolutely. And this is a little sample into some caps. Now unfortunately this has like a little green seal at the bottom, so the fluid's not green. I didn't have a clear cap, so I just poured it in here. But this fluid is clear and this is, you know, brown. I mean, you can't even see the green bottom of the cap seal. So that's kind of different.

Mark: One of the things we've never really talked about is like, what's the difference in how hard, like transmission does a tremendous amount of work. It's an incredibly complex, automatic transmission is a very complex piece of equipment that is under tremendous forces. Extra heat all that kind of stuff that we use them for. Kind of take for granted, but it's pretty tremendous amount of engineering that's gone into make them so good. Is a CVT even more susceptible to breaking down or having problems or in any way like that?

Bernie:  You know, CVT is actually, I think, simpler. There's actually less parts and pieces. For some reason they're not really very rebuildable. For the most part they're expensive. A lot of them are not rebuildable. If something goes wrong with it, either replace it with a used part. I know Nissan's had a lot of trouble with their CVT transmission of which they've replaced many of them with extended warranties, like up to 10 years, which is good on their behalf. But, you know, the fact is I don't really trust Nissan CVT transmissions. Maybe, maybe the new ones are good, but they're older ones are certainly they've certainly had a lot of problems with them.

But they are actually simpler. There's less parts and pieces, and it's kind of surprises me that, you know, you can't just go buy rebuild parts, but I talk with transmission rebuilders and wholesalers, and parts are just not really that readily available.

Mark: And what's different. What's the core difference between a CVT - constant variable transmission and a regular automatic transmission?

So anyways, the CVT doesn't have those planetary gears. It uses like drums and band, like very hard metal bands that will actually vary the diameter. It's kind of brilliant. It'll vary the diameter and speed from one shaft to the other, by just changing where the band sits on the drum. So it's a pretty cool concept. That's kind of the major difference. But the thing with a CVT is you're not limited to two, five, eight, 10 speeds. You can put any gear ratio so that it creates a way you can kind of tune the whole drive train in the engine for maximum fuel economy, emissions and performance.

Mark: And for driving, instead of having the kind of that shift that you can feel, where the gears change with a CVT, how's it different?

Bernie: Yeah. That isn't there, but I believe in the earlier days they actually set them so they actually had a feel of a shift point because people are used to that  kind of shifting feel of a car accelerating. And, you know, it would seem weird that it doesn't have it, but you can kind of feel it in a CVT when you can just hear it accelerate and it's a different feel.

So you know, sometimes I think they put that in so we remember. It's almost like, you know, when cars get electric, I'm sure they'll have some with options of having the sound of a motor running just for the good old days.

Mark: They do have that, actually.

Bernie: Yeah. He could probably create as an option, you know, for your performance car so it feels like you're actually going fast when the motors just going zing.

Mark: So how are Subaru CVTs overall for reliability?

Bernie: I think they're pretty good. I mean, we haven't run into too many issues. But the thing about Subarus is their transmissions have been good for a long, long time. I mean, I've owned some Subaru's over the years, for like many years, their transmissions automatic or standard have really been very reliable.

That's one very strong part of Subarus. CVT seemed to be okay.  You know, for some reason I don't trust them. Like I prefer a conventional automatic transmission. They just seem to be tried and true. And there's been so many CVTs of different brands. I'm thinking like Nissan, Minis to mention a couple that have been very problematic. And they're not really repairable and rebuildable.

Mark: So why are the manufacturers moving to CVTs? What's the advantage?

Bernie: I think it's fuel economy, exhaust emissions. I think those are the biggest reasons.

Mark: And how are 2014 Subaru's for reliability?

Bernie: So far they seem really good. And you know, I mean, they've gone away from the timing belt engine. So that's not a thing that needs to be serviced. And those timing belt Subarus, the 2.5 litres had head gasket problems. So we haven't seen one go bad on one of those. We have repaired some oil leaks from timing chain covers so that, you know, that is an expensive repair.

And the only issues with some of these Subaru's is engine oil, burning, unexpected oil consumption. And that is an issue that certainly happens on some models, not all, but that is a problem with some of these engines. But other than that, they seem to be, you know, very good cars.

Mark: If you need some service or maintenance for your Subaru, and you want experts who will look after you and do it right. The guys to see are Pawlik Automotive. You can reach them at (604) 327-7112 to book your appointment. Or you can do it on the website pawlikautomotive.com. And if you're interested, there's hundreds of videos, literally hundreds, we've been doing this for nine years. All makes and models, types of repairs, videos, articles, you name it also on YouTube Pawlik Auto Repair. Check us out there. And of course, thanks so much for watching and listening. We really appreciate it. Thanks Bernie.