Mark: Hi, it's Mark from TLR. I'm here with Mr. Bernie Pawlik, Pawlik Automotive in Vancouver. Vancouver's best auto service experience. And we can say that because they've been voted 24 times as best auto repair in Vancouver, voted by their customers by the way, and we're talking cars. How are you doing Bernie?

Mark: So todays vehicle is a 2014 Subaru Outback that had low oil. What was going on with this vehicle?

Bernie: This is vehicle came to our shop on a recommendation by a friend who was concerned because the engine was making some noises and checked his oil and found that it was not reading, really it was very low. So that was a concern we were dealing with.

Mark: So what kind of testing and inspection did you do?

Bernie: Well, first of all, of course, checking the engine oil level to verify his concern. We did notice that the oil was very low. There was some slight noises in the engine. Did a visual inspection underneath the vehicle, looked around for oil leaks, found none. So there was no external oil leaks.

It was due for an oil service. So we did change the oil. Found the engine oil was about two litres, low. Looked for a few other possible causes of engine oil consumption, like PCD valve and those kinds of issues, found none there. So basically the engine was low on oil. Changed the oil. The noises stopped, which is good. So I think the owner dodged a bullet there.

Mark: So if there's no oil leaks or a plugged PCV valve, how did the engine oil get so low?

Bernie: Well, basically these engines in this particular model, have an issue of burning oil. Some of them do some of them don't .We'll talk a little bit more details on that in a few minutes. But essentially for a car engine, if you're losing oil, you're probably burning it. Burning oils is a normal part of the combustion process. But on many engines you can go 10,000 kilometres or more between oil changes and not use a drop. I mean, a drop will be used, but very little. So you won't notice a difference, but oil consumption is normal. It's just when it becomes excessive, that becomes a problem.

And I think people, these days are a little lazy. Very few people ever check their oil. You should really do it every one or two tank fulls. I mean, I don't even do it on a lot of my vehicles, but a lot of them have low oil warning lights, but if your vehicle doesn't have one, which a lot don't, it's important to check your oil.

Mark: So running an engine on, with low oil is pretty bad, not, not good. So did this cause any kind of permanent engine damage?

Bernie: Well, I can't say for sure, but I would guess that it probably has some effect on the engine somehow. Once you start developing some noises in an engine, and we see this from time to time, people run their engine low on oil, we change it or top it up. The noise has stopped. That's a good thing, but there will be some damage somewhere because things that have been allowed to, timing chains run a loose or, you know, things just not lubricated properly. That will have a long-term effect on the engine. So how soon it'll show up, it's hard to know.

I'll have a look at a couple of pictures here. Here's the engine. 2014 Subaru. 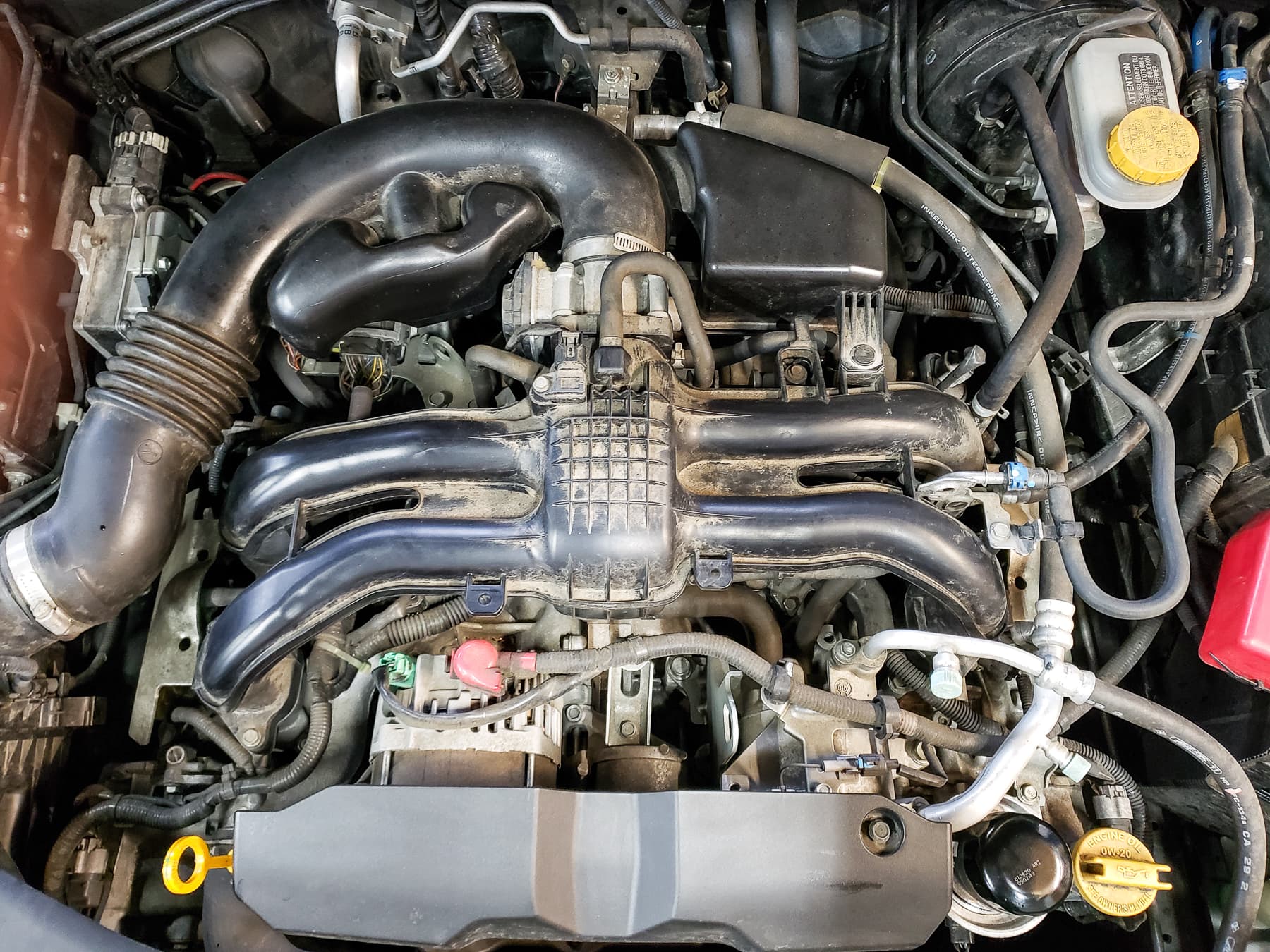 Plastic intake manifold, which is kind of common on Subarus. A lot of manufacturers, they find ways to lighten the car. They'll use plastics for certain things, but below it all is still good metal components.

Not a lot to see here. I mean, it's, it's a boxer engine. Everything's kind of sits down below here, but I do have another closeup image of, just kind of looking down at the area. 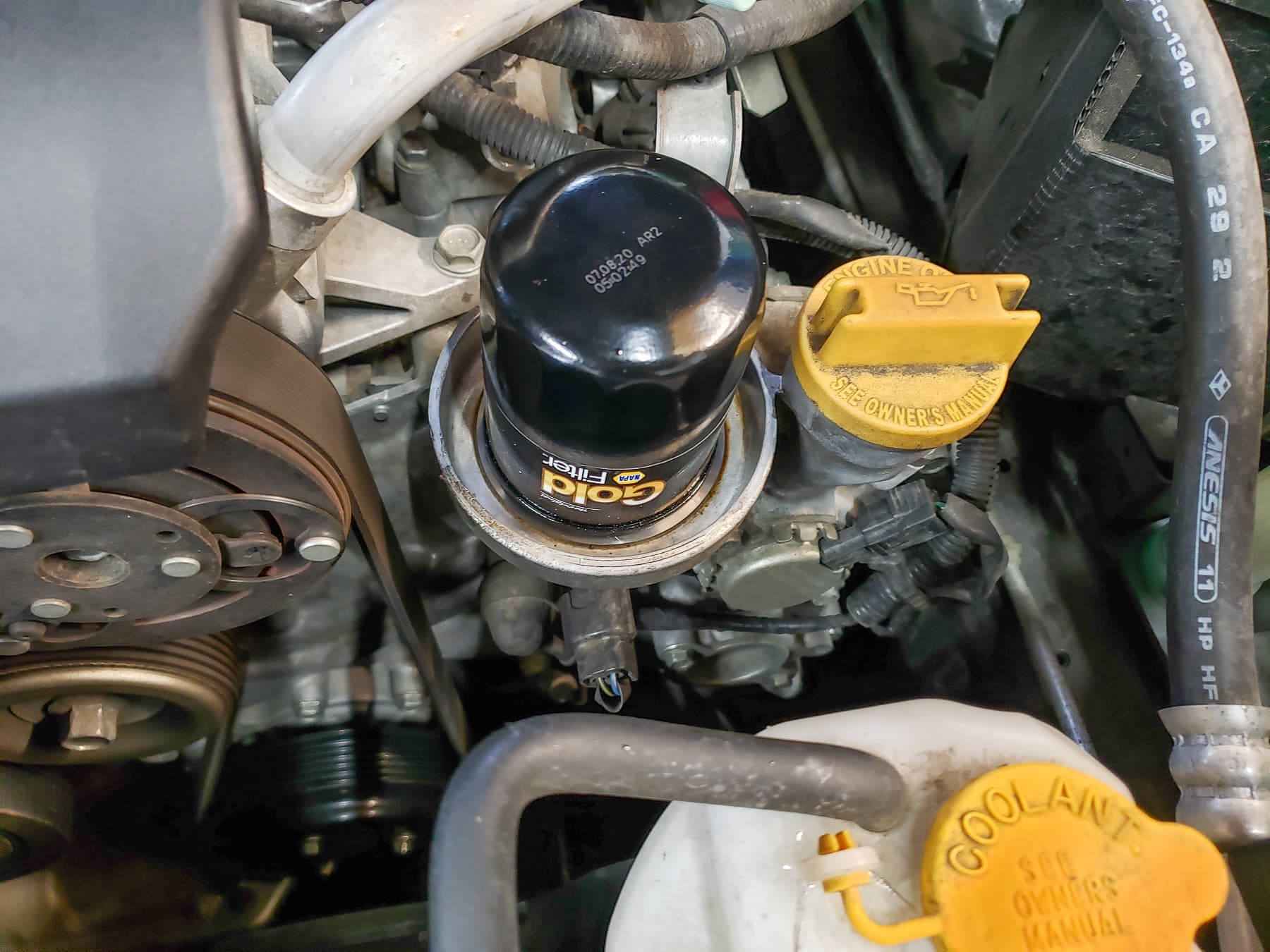 This is the oil filler cap, the oil filter's located conveniently right at the top of the engine. So it makes for simple replacement.

And they put this nice little drip tray, diverting here, but this nice little drip tray here. So when you take the filter off, any excess of oil just stays in this tray here and you can wipe it up without sloshing it all over it down the side of the engine. But down here where my mouse is pointing here, these are the fronts of the cam shafts. So there's variable valve timing. This is a timing chain engine. And an engines with timing chains are even less tolerant to running low on oil than, say a timing belt engine. Cause you've got a lot of moving parts that require good lubrication all the time. Just make sure your oil’s full. That's the key takeaway.

I think most of their information comes from people complaining about. So, you know, in these certain model years that there's a much higher level of complaint, but once you get to 2017, nothing about engine oil consumption whatsoever. So I'm assuming that Subaru has got that figured out or else we're going to see a round of complaints coming up. Yeah, those are the critical years, 13 to 15.

Mark: So could this repair still be covered by a manufacturers warranty?

Bernie: It might be. You'd have to check with the dealer on that. And they may even offer an extension on some of these. I don't really know the details on that, but what I was just going to go through next is a TSB, which is a technical service bulletin put out by Subaru to address this exact condition.

This is just an example. I mean, this is many pages on this bulletin. A lot of details really for the repair industry, for the service advisor and the technicians to repair the vehicle properly. And these are things we look at in our business as well.

But subject of this TSB surface treatment change to oil control piston rings. So that's obviously where the issue is, with the oil control rings. But the original repair used to be, and this bulletin states it, to replace the piston rings, but they since changed that to replace in the short block of the engine.

So it's not a complete engine replacement, but it's a major job and not something you'd really want to pay for out of pocket. So if you are using some oil, you'll probably find it cheaper just to add oil, then actually take this on. But if your vehicle's still covered by warranty, it would be very worth doing.

There's a TSB number here. We'll put it in the the notes for the podcast and this. The one other image I want to share with you, they show some engine details and actually how to replace a number of the items. And this is just an inside view of the timing chain. There's basically two timing chains being a boxer engine. I just wanted to show this as there's a lot of moving parts inside this engine. So again, keep your oil full, keep it clean. These are the kind of critical things that people sometimes forget. And it's very important.

Mark: Would a third party warranty have covered this?

Bernie: The only way you could is if you can make a deal with the owner of the vehicle, say, Hey, you know what we're going to fill the oil up. I want to check it 1200 kilometres, which was what this TSB says and see if the oil's low. The odds of that ever happening, I'd say it would be zero, but really there is no way to check it other than given time and driving it. I mean, if an engine is blowing blue smoke, of course that's an obvious indicator, but yeah, avoid. And the issue with this oil consumption is it doesn't get to the place of blue smoke at all. It gets burnt, but you don't ever see it.

So unfortunately there really isn't a way, and that's why I'm kind of reluctant recommending these cars to people. They're fantastic cars, but this issue is just something you might not know. But if you get good maintenance records, you might actually find from the owner that, Hey, you know, this thing actually had an oil burning problem. I had the block replace and that would make the car definitely more valuable buy.

Bernie: Yeah, they're really good cars. I think they're fantastic. You know, and they're less maintenance than the older models that had the timing belts. Cause you don't have to do that. And the head gaskets don't fail, like the timing belt model engine. So theoretically, assuming you don't get one that's burning oil, each it should actually last a lot longer and be a better car. So I think they're really good. I highly recommend them.

Mark: So there you go. Things to be aware of if you're going to look at buying a used Subaru, but also if you have a Subaru and you want expert advice on how to get it repaired, how to make sure it lives as long as it can, is reliable. The guys to see in Vancouver, British Columbia are Pawlik Automotive. You can reach them at 604-327-7112, or you can book your service at pawlikautomotive.com. They'll call you. They'll check everything out with you. They'll be ready for you when you show up. You have to call and book ahead. They're busy. Of course, if you want to just research stuff, you can see all the videos we've done, close to a thousand on pawlikautomotive.com. All makes and models and types of repairs. Or on our YouTube channel Pawlik Auto Repair. We really, really, truly appreciate you watching and listening. And thank you, Bernie.