Mark: Hi it's Mark from TLR. I'm here with Bernie Pawlik, Pawlik Automotive in Vancouver. Vancouver's best auto service experience. And we can say that cause they've won best in Vancouver, 24 times as voted by their customers and we're talking cars. How are you doing Bernie?

Mark: So today's victim is an Audi Q5, a 2015 vintage that had a wheel bearing problem. What was going on with this vehicle?

Bernie: Yeah, so the owner of the vehicle, was due for service and also noticed that noise when she was driving the vehicle sounded kind of like a jet taking off or some description similar to that, like a noise that would happen as you start moving faster.

Mark: So what kind of testing and diagnosis did you do to narrow down what the issue was?

Bernie: Well, the first step is a road test to confirm that we can hear the noise because sometimes clients come to us with noises that we actually don't hear, which is strange. But usually these ones we do, and it was pretty apparent on the road test, the noise.

Second step of course is to confirm which wheel bearing is it. Sometimes you can kind of get an idea and hear where the noise is coming from, but we need to confirm it on a hoist. So we put up on a hoist being an all wheel drive vehicle, once we put it in drive on the hoist, get one of our texts to drive the vehicle in the air and listen to all the wheel bearings with the stethoscope. And we can tell which wheel bearing. In this case, it was the front left wheel bearing that was worn out.

Mark: So what's involved in changing a wheel bearing on an Audi?

Bernie: Well, the wheel has to come off and the brakes need to be removed. From there, then we can actually access the wheel hub which we remove, the bearing comes in assembly. I'll show a picture in a minute, but basically the bearing and the hub separate. But what we do is we take the bearing off of the steering knuckle, and that involves also unbolting the wheel bearing from the axle shaft as well, being an all wheel drive vehicle. So there's a little more complication involved in an all wheel drive.

So it involves, you know, there's some pressing involved. Usually things get corroded and we may as well just get into some pictures right now, because as they say a picture's worth a thousand words.

So this is the brand new wheel bearing as it comes, the part that's replaced. So this is basically a ball. It's got two ball bearing races and slightly different diameters for these two. So you have to make sure that you put them together the right way. In some older Audi's, it didn't come with this sleeve. I guess you could do it the wrong way possibly, but the older ones you actually pressed in the bearing and you could actually put it in the wrong way. So then the hub wouldn't fit in properly. So you have to be careful. It seemed like Audis always have two different size races. 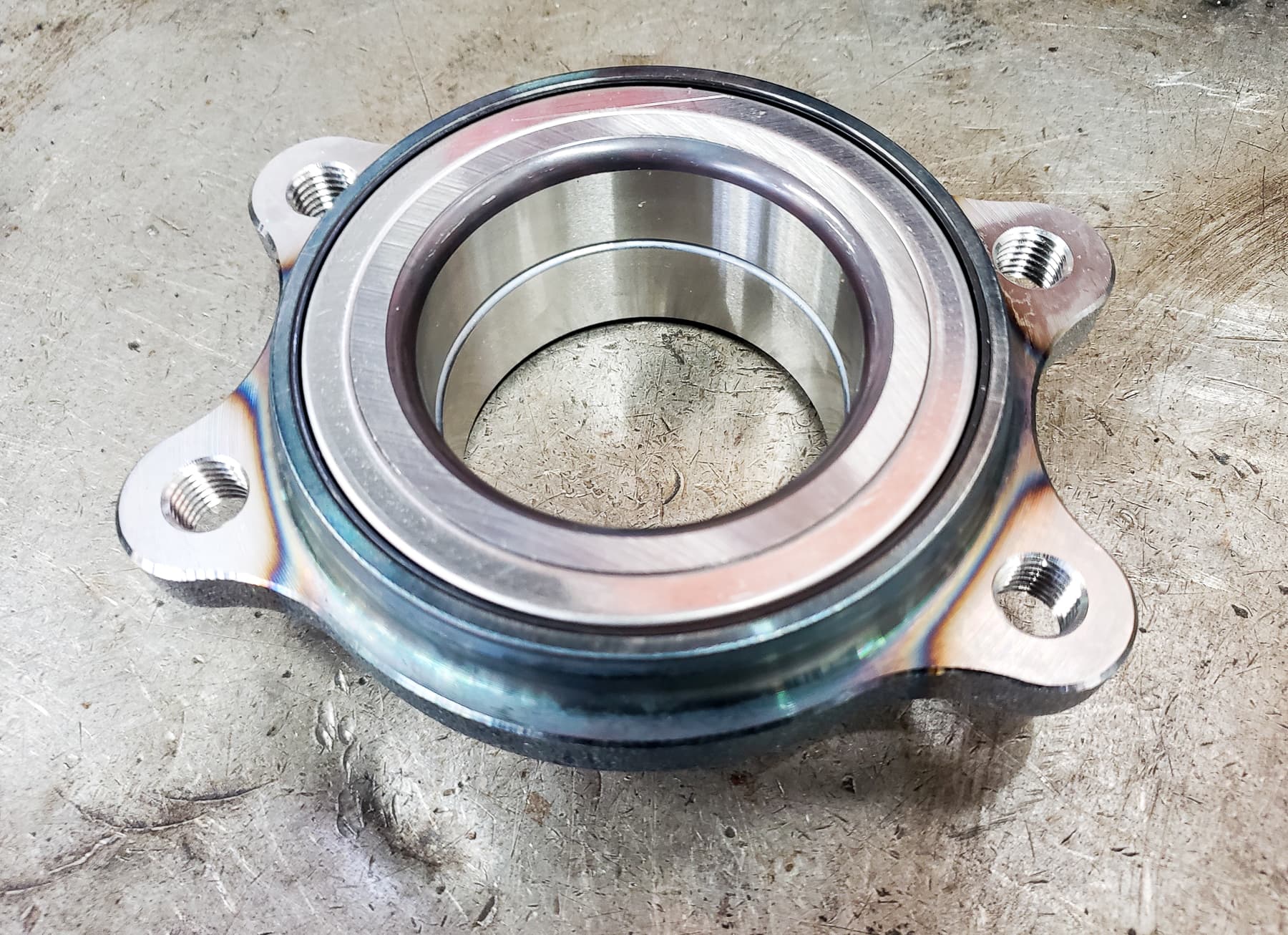 So here's the old bearing. So tends to be a lot of corrosion. And this is something that you have to battle when we take everything apart. Usually the bearings tend to weld themselves into place with rust and corrosion. So tends to involve a lot of hammering or large pry bars to get it out. But this is the bearing race. One of the bearing races is off here, cause that usually sticks on the hub. We have to pull that off separately, but you can see these are all the ball bearings that go around and there's two sets of these. So pretty heavy duty bearing in this vehicle. 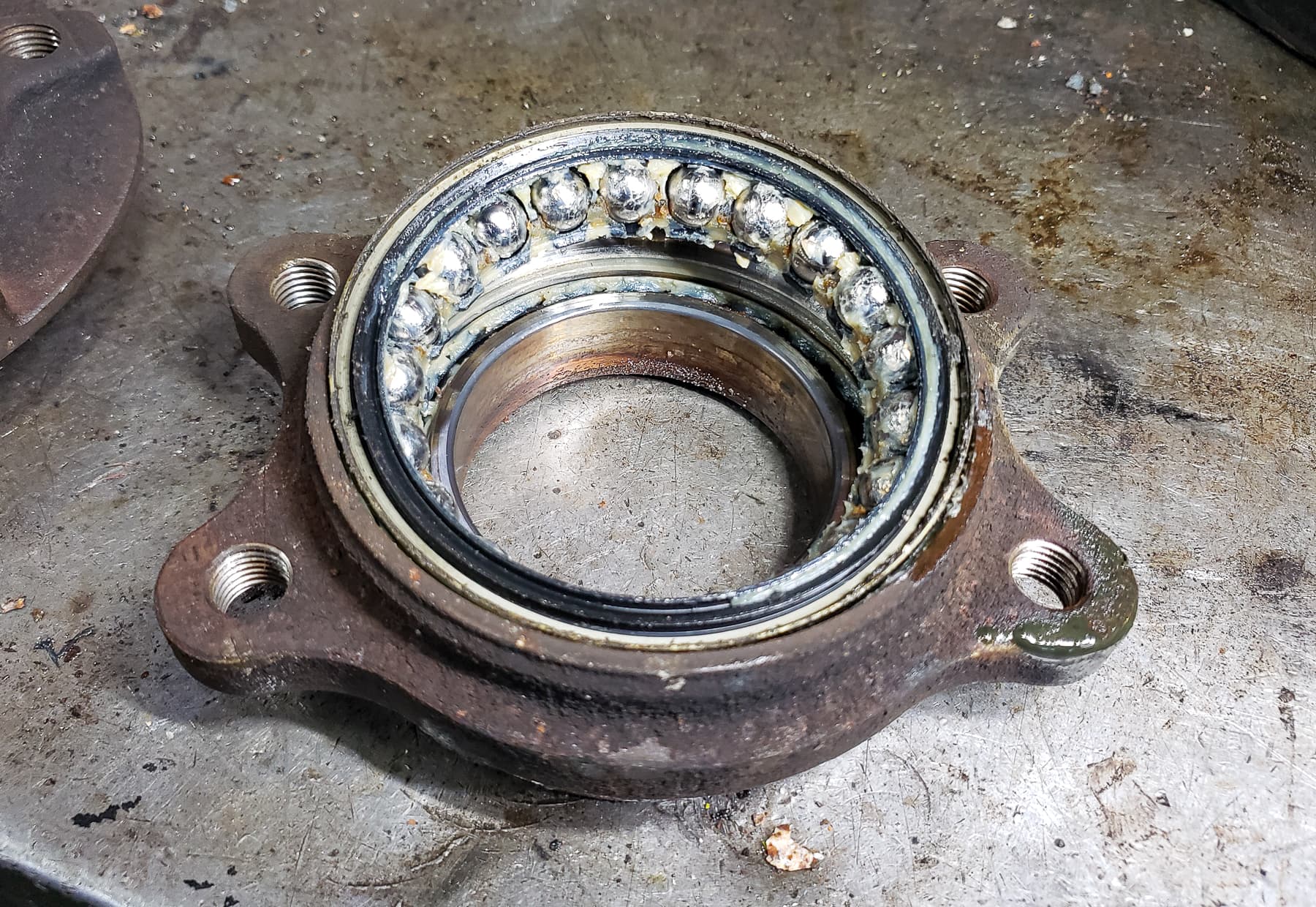 There's the wheel hub, so this part gets replaced. We reuse this as you can see, it's step there's one diameter here, one there, and the splines in the middle are where the actual shaft slips in to drive the front wheel. 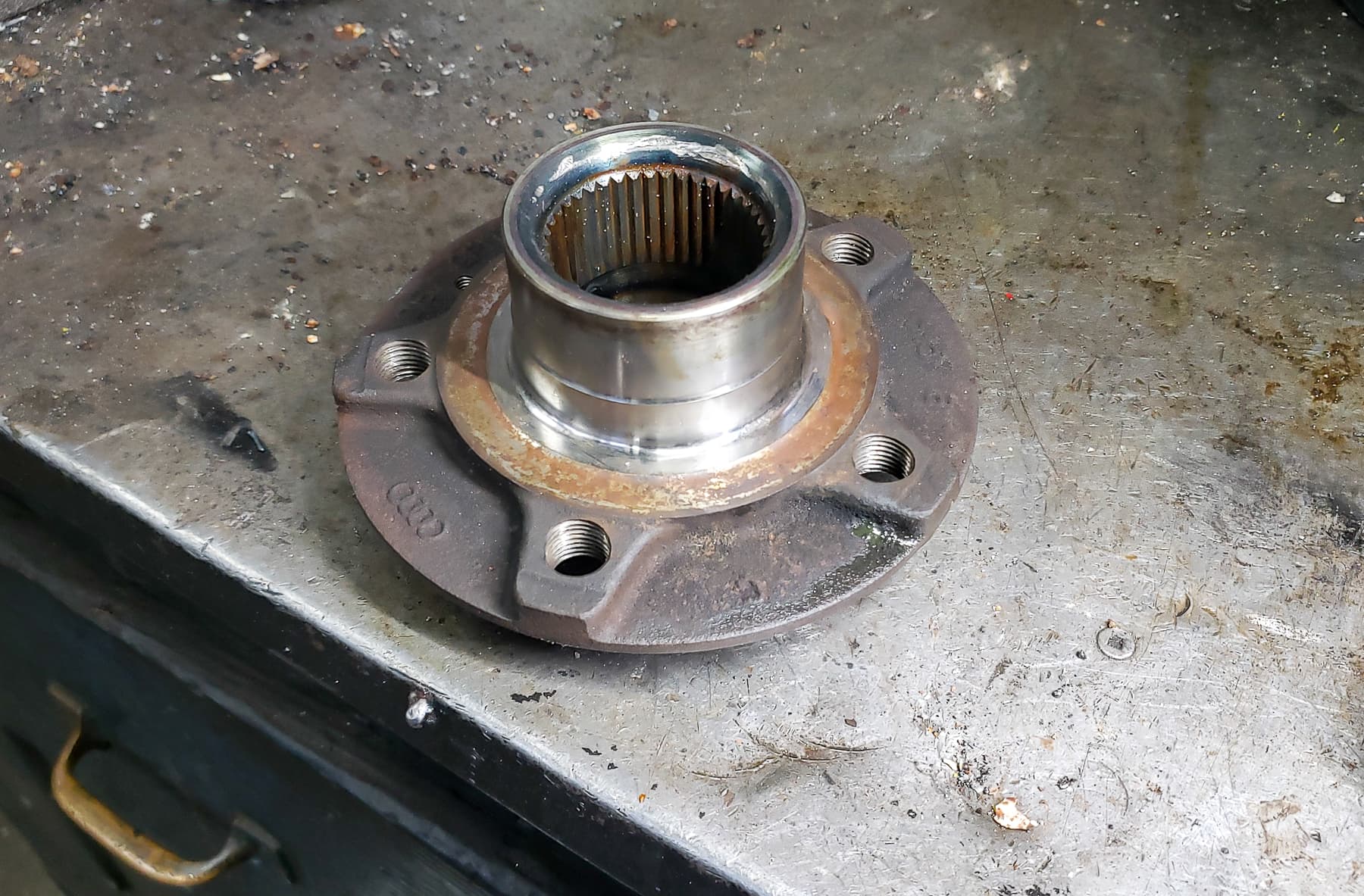 And the final picture is the, this is where the wheel bearing fits in. Again, you can see corrosion here. It's a 2015, so what's that make it about six, seven years old you know, and people often buy these vehicles or at least around here to go skiing or places. And you know, this is probably seen a bit of road salt on it, which adds corrosion, which makes it a little more difficult to take out. 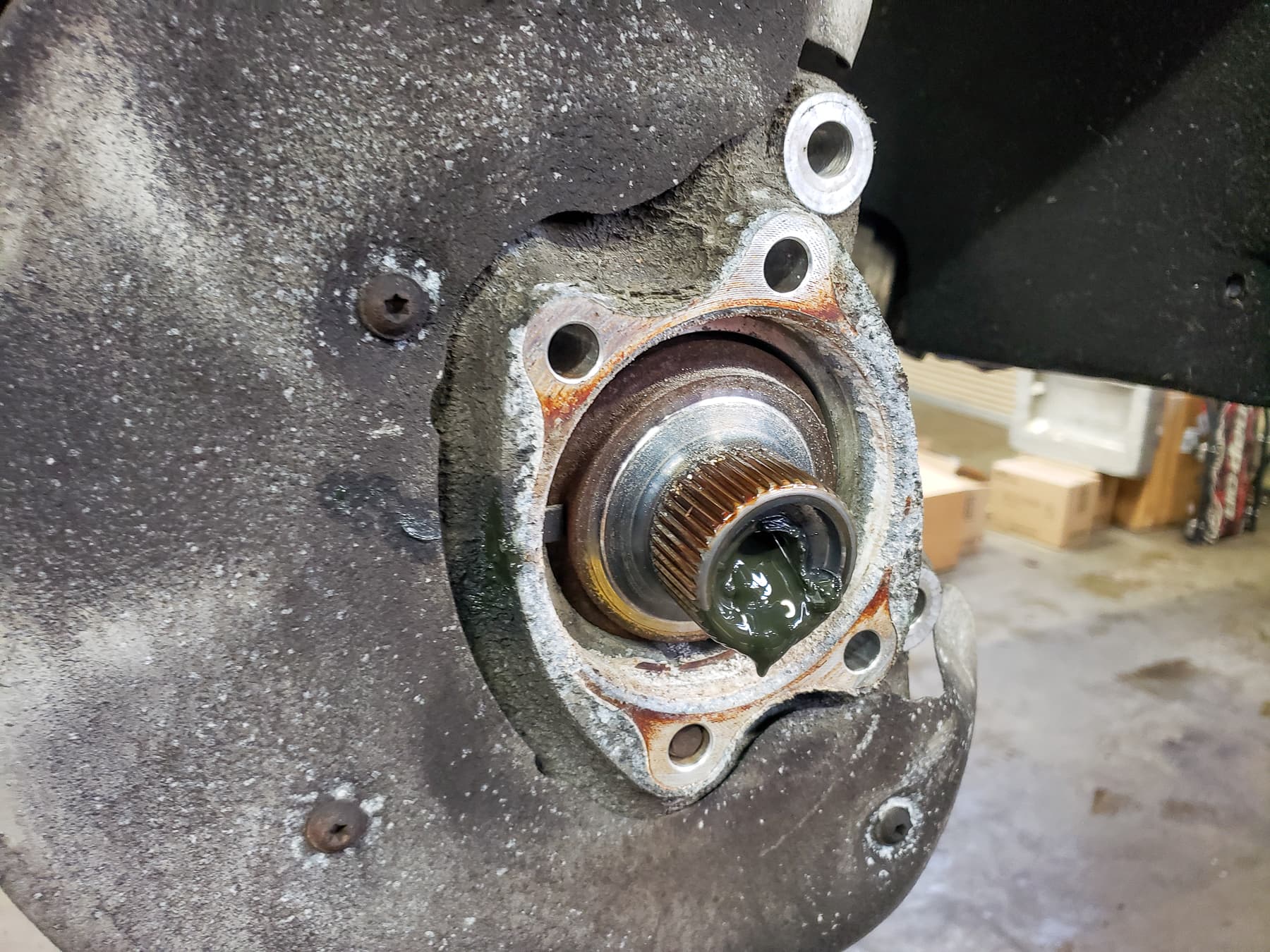 But here's the end of the axle and you can see where the splines slipped into the hubs. So there's a very large bolt that attaches this to the hub, keeps everything rotating properly and smoothly. That ends our picture show for the day.

Mark: So this is a very complicated job, not something you're going to try and attempt to do at home, because you have some specialized equipment that you need to use in order to get that off of the axle properly.

Bernie: Yeah. I don't want to say that if you're bold enough to try to do it at home, that you know, with a large hammer, some pry bars and some tools, you couldn't do it, but there's a lot of very tight bolts that were involved, very large tools to remove. And of course, we have hydraulic presses that we use to pry things apart to take the hub off the bearing. And then sometimes you have to actually cut the bearing race off of the hub because they stick on there and just the way they're designed. So it involves a lot of creative work to get it off. It's definitely not a do it at home kind of job.

I mean, I used to have a mobile auto repair business where I do things out on the road, so to speak. So I got kind of creative, but even a job like this would have been exceptionally challenging and very time consuming and not very doable for sure.

Mark: So basically it sounds like a lot of work.

Bernie: It is a lot of work. But with the right tools, it's just a straight off procedure, but again, you know, having the right tools just makes all the difference.

Mark: So do the hubs ever wear out or get damaged?

Bernie: They do from time to time. And what'll happen is, you saw there's two bearing races occasionally, haven't seen one for a long time. One of the bearing races will start, will somehow the fit will get loose on the hub. And the actual hub will spin on the bearing race. And if that happens enough times, it starts wearing down the hub and it won't fit properly. These have to have a friction fit. So there's just a slight, I don't know the exact measurements, but we're talking thousands of an inch of just exact fit. So, it fits with a tightness.

If that happens, then the hub has to be replaced. And on many vehicles, when you buy this kind of assembly, it actually comes with the hub in the bearing. So you basically undo those four bolts, if you saw that picture we had of the actual bearing assembly, you unbolt those four, and the hub comes off of the bearing and you put it on. Every manufacturer's a little bit different. You know, really nothing wrong with keeping the old hub because they don't generally wear out, but it once in a while they do.

Mark: Is this a common repair on Audi?

Mark: So is there any way that you can have caused the issue or that you could, or are there steps that you could take that would help lengthen the time between having to change your wheel bearings?

Bernie: You know, there's really not much you can do. These are a sealed part. You know, and they're well sealed. I think over time, the reason this bearing failed is probably over time some moisture probably seeped in past a seal. You know, it probably got driven on some salty roads and that causes metal to start expanding or contracting or corrosion to build up and it'll allow some moisture to get into the bearing. As soon as that happens, then it tends to wear the bearing out. There's not much you can do to prevent that, you know, I mean, unless you drive in Arizona and you're not driving through the bush where there's dust. Because again, dust could get in and grind the seal out too, but really, there's not much you can do.

They're just going to wear out on their own time. I mean, if you start bashing curbs that could possibly put some strain on it, but again, if you're doing that kind of thing, you're probably going to be wearing other front end parts out faster. So really not much you can do. Just you know, one of those kind of set and forget it kind of parts and that's about it.

Mark: And how are Audi Q5s for reliability?

Bernie: They're kind of up and down. The earlier generations and a lot of problems with some of their engines with excessive oil consumption. This one's a 3 litre turbocharged V6, pretty nice unit. So far, they seem to be fairly reliable. You know, it gets vehicles not too old, but you know, some of the earlier ones with the four cylinders definitely had some oil consumption problems.

And usually I think that involves engine replacements, but I'm not a hundred percent sure on that. So it's a kind of vehicle I'm a little cautious on, but it's certainly a very nice vehicle. Nice size, you know, sort of smaller SUV. Overall, pretty good.

Mark: If you're looking for service for your Audi in Vancouver, the guys to see are Pawlik Automotive. You can reach them to book an appointment, 604-327-7112 or you can book online at pawlikautomotive.com. You have to book ahead, they're always busy. Or you can check out all the videos that we have. We have them on the website. There's close to a thousand there on all makes and types of repairs. Over 10 years of doing this. Or on our YouTube channel Pawlik Auto Repair. And again, thank you so much for watching and listening. We really appreciate it. Thanks Bernie.