Mark: Hi, it's Mark from Top Local. I'm here with Bernie Pawlik Pawlik Automotive in Vancouver. Vancouver's best auto service experience. We have exciting news, now 24 time winners of best auto repair in Vancouver, 24 times. Come on, give somebody else a chance. No, they're the best as voted by their customers and we're talking cars. How are you doing Bernie?

Mark: So today's victim 2015 BMW, 435i xDrive. BMW has the longest names in history I think. Something was going on with the front tires on this vehicle, what was happening?

Bernie: Yeah, so the vehicle came to our shop for not a province inspection. It was coming from Ontario. And whenever you license a vehicle in BC, you've got to have a provincial safety inspection done on the vehicle to make sure it's compliant. So we did that and found that one of the front tires had a bulge in the sidewall, which is definitely a fail item.

Mark: Can you repair a bulging sidewall?

Bernie: No, sidewall damage on a tire is not repairable. The only repair you can actually do on a tire is like a nail or a puncture in the tread area. And if you get too close to the edge of the tread, that's not repairable, but if it's sort of central to within an inch of the edge, you're good. Maybe even three quarters repairable. Sidewall no.

Mark: So how does the sidewall get a bulge? Is it eating too much fat food?

Bernie: Yeah. Yeah, it's bad, bad air. Usually what I find, especially with this car, it's got low profile tires. If you hit a pothole that's usually a way to get a bulge in the sidewall, but what happens is it actually causes internal damage to the tire.

So it's allowing air to escape from the sort of inside sealed area of the tire to the outer layers of the tire. And it's definitely indication of tire damage. And of course, if the sidewall blows, you know, pop it with a pin or something that you're going to lose all your air. So it's one step away from you know, disaster.

Mark: So I know, or I become aware that BMW, the later ones are using run flat tires. How are they to change? Is there anything different about run flats on a maintenance level?

Bernie: Well run flat tires, the whole reason they have them is so that if you actually do lose air in a tire, so you have a puncture, you're actually able to drive a short distance, maybe 50 kilo meters, not at a real high speed to get your tire repaired.

And these cars don't have a spare tire. A lot of newer vehicles don't have spare tires and they don't have run flats. But the nice thing about a run flat as you can actually still drive and get your tire fixed. Changing them is a bit more work because the sidewalls are exceptionally stiff. That's the only way you can have a tire that you can run low on air. Any average tire, of course, it'll just squash up and ripped to shreds once  the air goes out of it. So it's kind of a neat design. Very expensive, by the way, like run flat tires, they're almost twice the price of a non run flat tire. So you can expect to pay a lot more money for the tires when you need to replace them.

Mark: So once you were doing inspection, did you find anything interesting that you think caused the problem?

Bernie: We did and sometimes you think, well, it's just a tire repair. Why are we doing a podcast? Well I've often been preachy about the idea of don't get plug repairs for tires. You know, the proper way to repair a tire is to take a tire off the rim, seal it with a patch plug, you know, inspect the inside of the tire. And when we took the tire off, we found some very interesting stuff. So let's get into some pictures and we can look at reasons why you don't want to just use a plug on a tire. 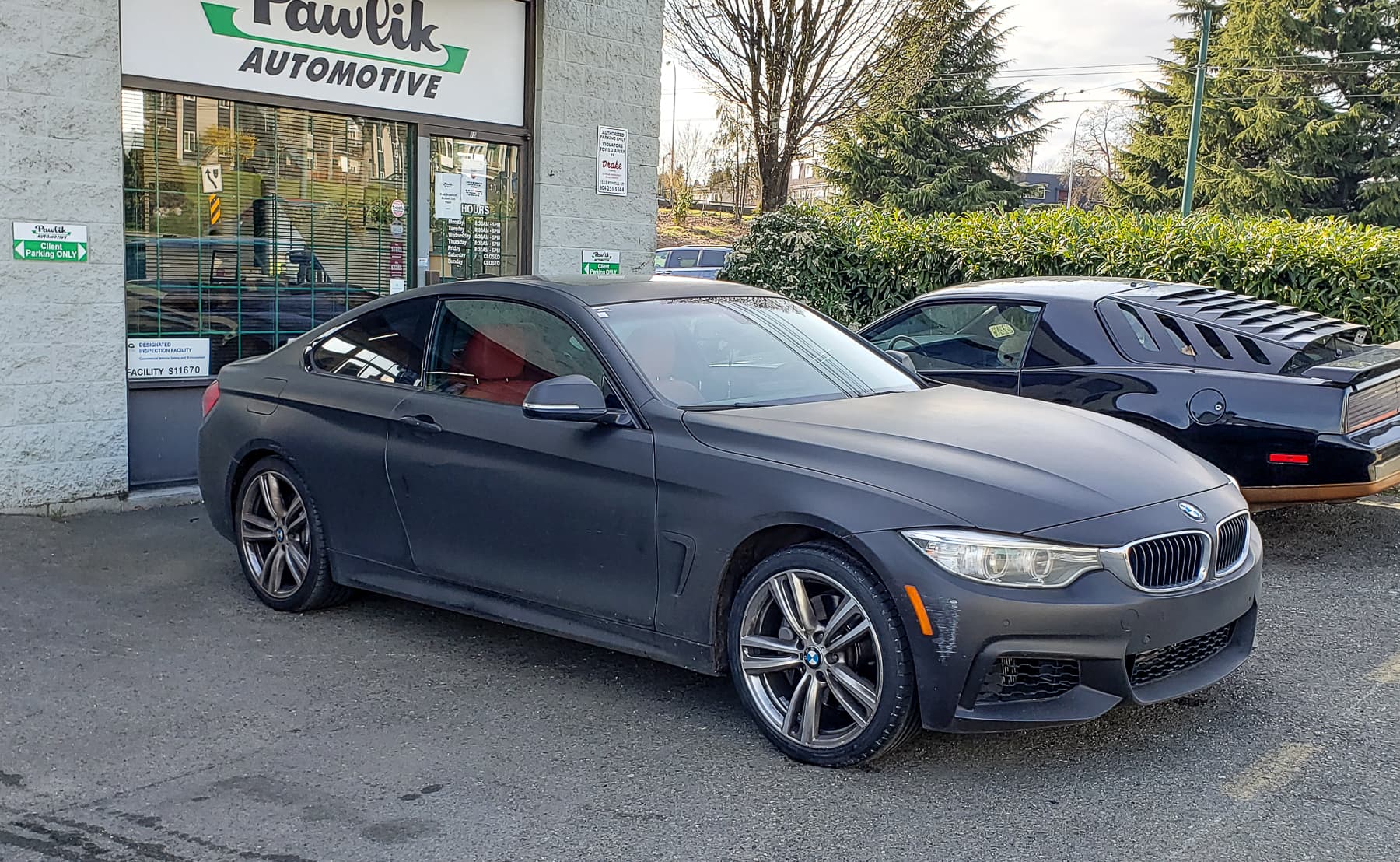 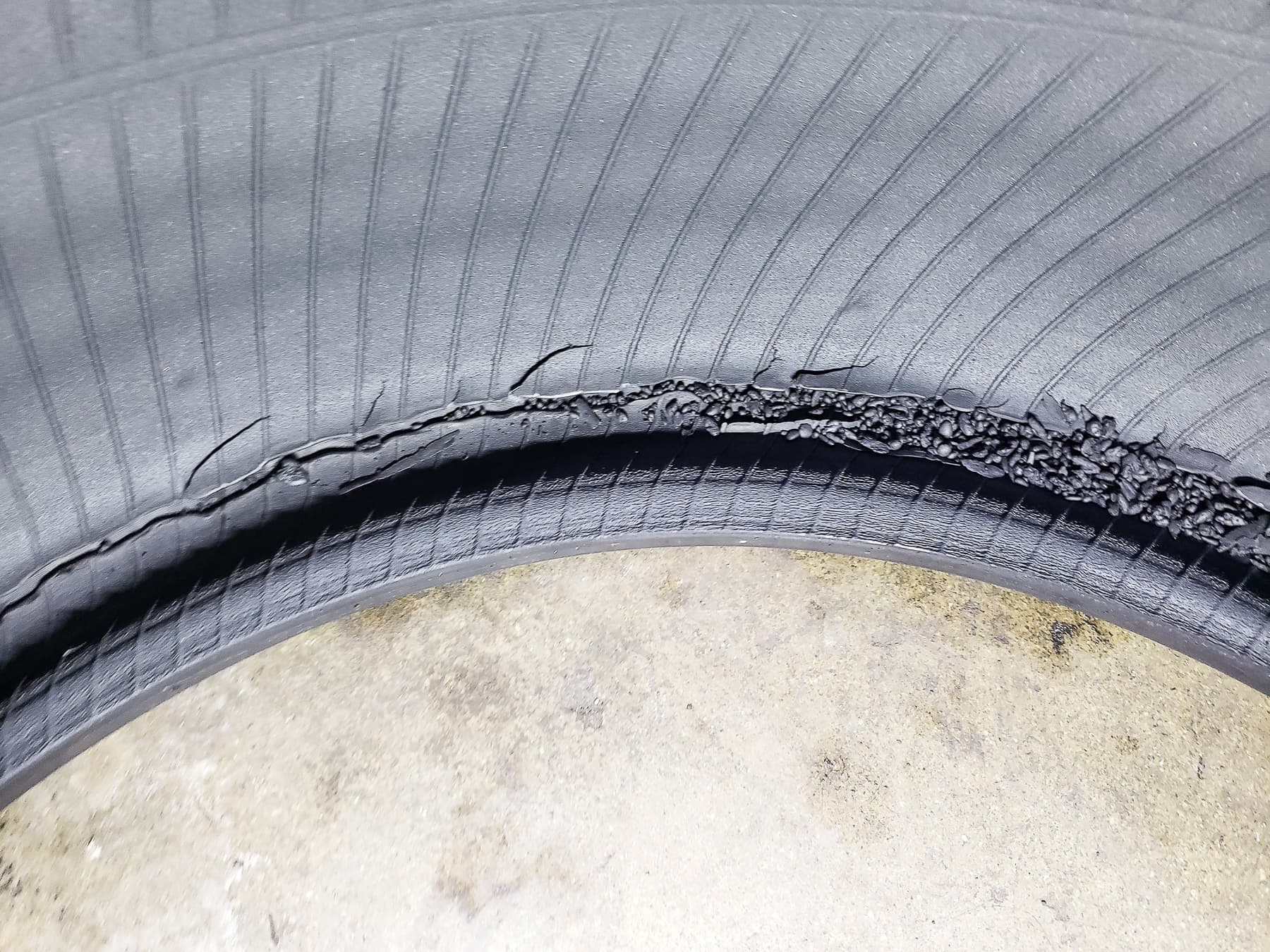 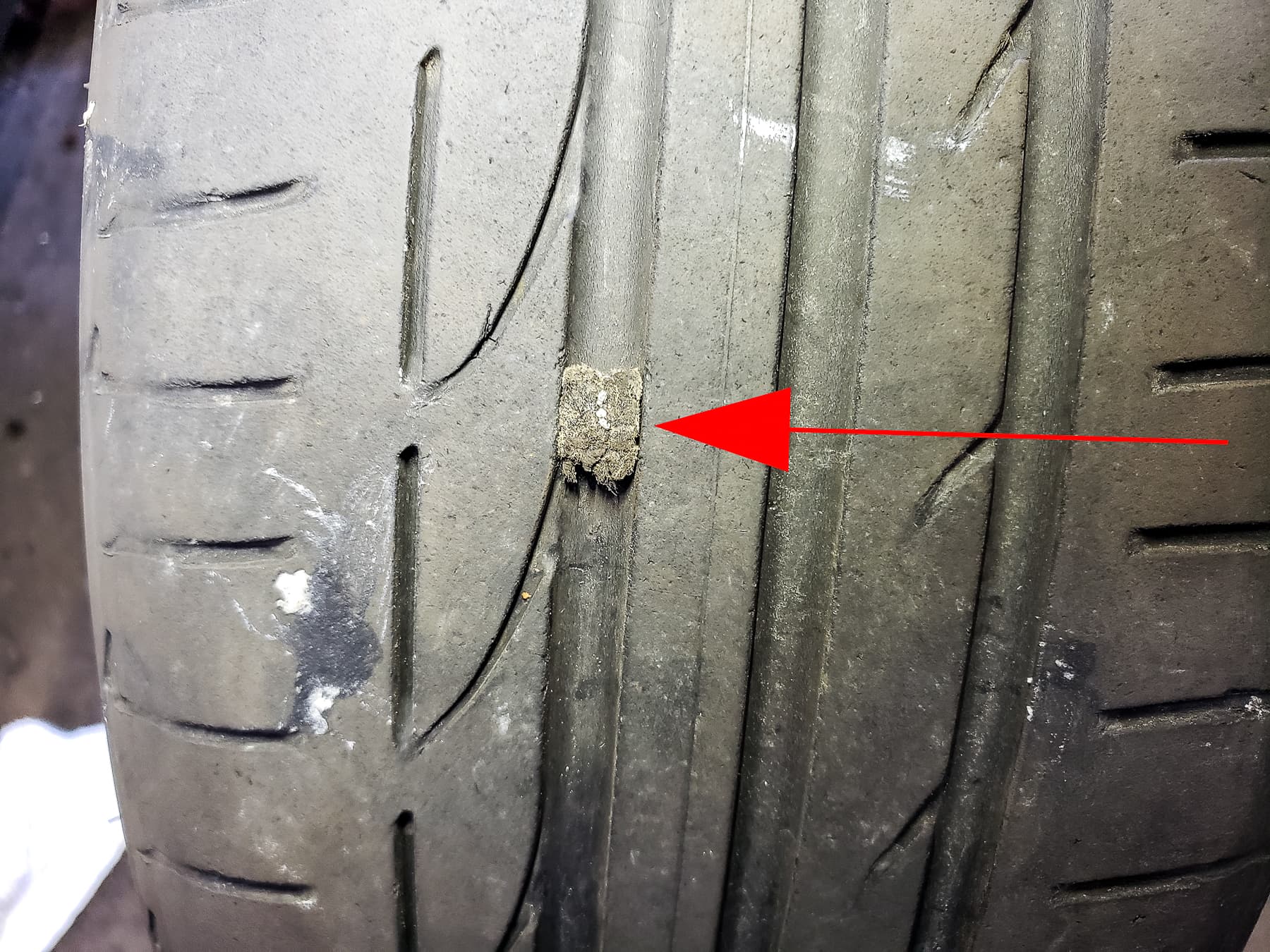 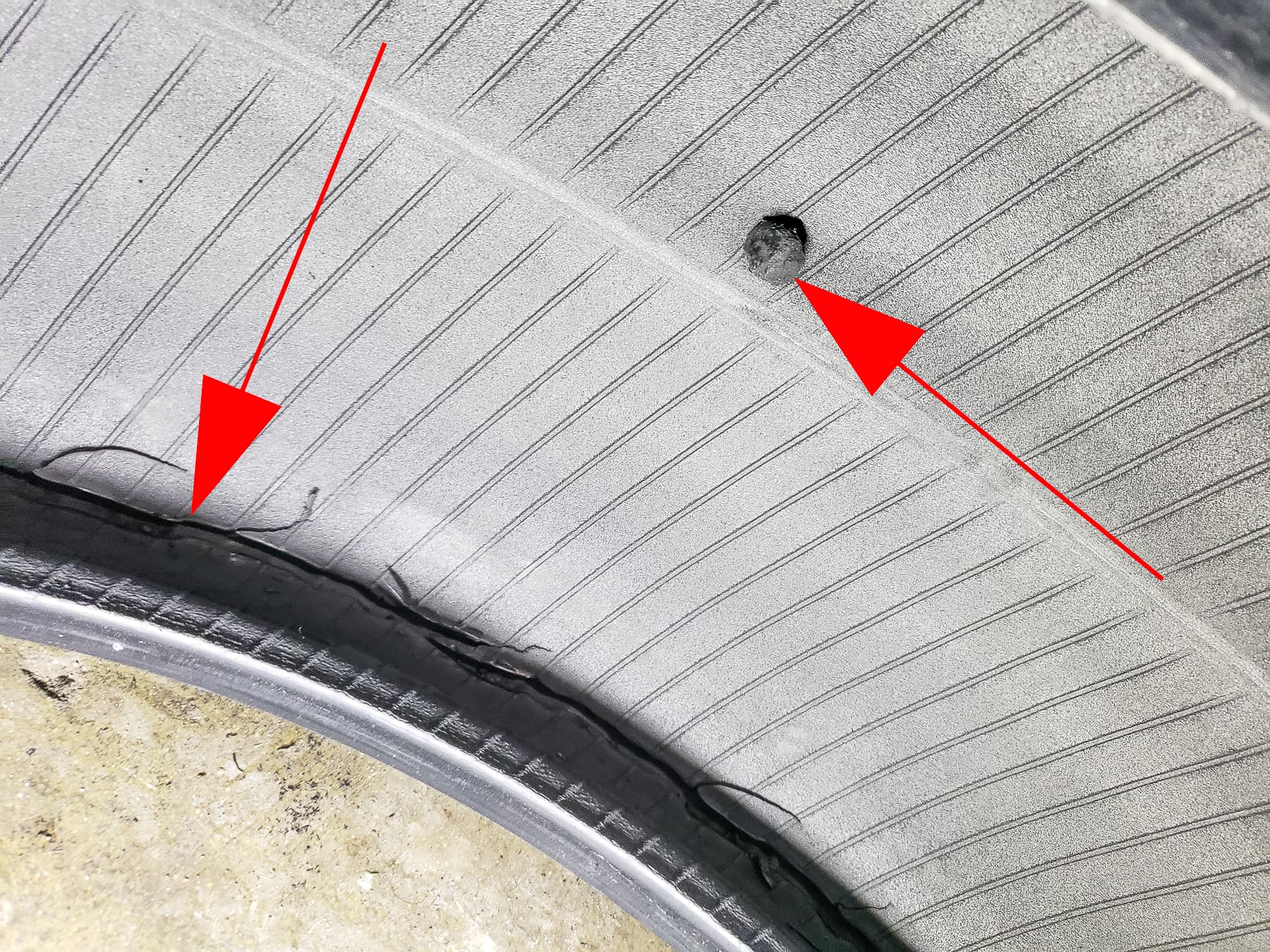 So there's our 435i with a nice dull wrap finish. This is what we found when we took the tire off. This is the inside sidewall, severely cracked, chunks of little bits of rubber inside the tire. This tire had probably had been run for a long time low on air. Who knows how long, hence the bulge, which I figured may have been more recent, but obviously it wasn't.

We looked further at the tire, this is a plug. Something you can pull into a garage, you could probably even get this yourself. Just poke it in with a piece of whatever rubbish material and a bit of glue. And that plugs the tire and your leak's fixed. Not a recommended or endorsed way to repair a tire.

And the reason why, I mean, they generally work. They do hold air in the tires because you're not getting a chance to inspect the tire. So there's the inside. There's the plug that stays in there. But you can see this crack in the sidewall. This was probably there long before this plug was put in and who knows how long this person has been driving on a tire.

That's really frankly, very dangerous. If this was not a run flat tire, it would blow out very easily because the run flat is a harder sidewall. There's at least a little bit of protection, but not much. When you look at this crack and this one all the way around the radius, the diameter of the tire. When you have a flat, get it fixed properly is what I'm saying.

Bernie: Yeah. Don't use a plug. Now I do have to say there was one exception, I had a customer who he used to take his camper van on these rough logging roads. And he said, I usually get like one popped tire every time I go. So he goes, I bring a plug kit and a compressor. And I thought, well, you know, that's probably a valid way to repair it because you're not near a shop where you can actually take the tire off and repair it. And I'm like, well, you know, I guess that's okay. But you know, if you're repairing it immediately and not driving it, it's probably okay.

But if you're going into a shop, if they can't take the tire off the rim repair. You really shouldn't be dealing with them.

Mark: You mentioned this was a provincial inspection. So did you need to do any other repairs for the car to pass the safety rules in BC?

Bernie: Yeah. So we found a couple issues with the car. One is the rear brakes were worn out. So they needed new pads and rotors on the rear. And being a BMW, there was actually an indicator and a warning on the dash saying rear brakes needed to be replaced. So the owner knew that when he came in and the other thing that needed to be done was there was tinting on both side windows and the windshield. You're not allowed to have tinting on front windows or windshields in British Columbia. Those windows have to be absolutely clear, just like the factory, no tint whatsoever. You can have the back windows tinted black, but not the fronts. So that had to be removed.

So, you know, as a preparation if you're watching this podcast, if you had tinted windows, if you want to speed the process up, you can get it removed. We fortunately have a neighbor who is in the tinting business. So he also removes tinting. So it's very convenient for us and our customers. But just so you know, tinting will fail your test.

Mark: So you found one cracked sidewall, did you have to replace both tires?

Bernie: We did both tires because the tire on the left side, the one that was good, you know, the tread was starting to get worn. This tire actually had better tread than the other side. It's entirely possible that they may have had a bulged sidewall problem. I had a Mercedes with low profile tires, and a couple of times I'd have to replace the front tires after winter because you hit a pothole, Oh, there's a bulge in the sidewall. Those weren't run flat tires, but you know, nonetheless, once you get a bulge, it's dangerous.

But yeah, we replaced both. I mean, it's always better, especially on the front to have both and the treads are much thicker on these tires. We replaced the left tire, you know, there's no damage whatsoever in the sidewall because of course they'd never been run low on air. If you run a tire low on air for a while, it does damage the tire. Many times we go to do a flat repair and we pull the tire off and it's damaged because it's been run low on air. So keeping it full is critical for the long tire life and your safety.

Mark: If you want some expert maintenance for your BMW or any of your vehicles, if you feel like you got an issue, a bulging sidewall, the guys to call in Vancouver, Pawlik Automotive. You can reach them at (604) 327-7112. You have to call and book ahead. Or you can use the website pawlikautomotive.com. You can book your appointment right there on the website. They'll look after you, they'll call you. They will find out exactly what's going on and be ready for you when you arrive. So that you're in and out of there as fast as possible, but it will be done right.

And they're 24 time winners of best auto repair in Vancouver. It's not a fluke after 24 times, their customers love them and you will too. Pawlik Automotive. Thanks so much for watching and listening. We really appreciate it. Thanks Bernie.