Mark: Hi, it's Mark from Top Local. I'm here with Bernie Pawlik, Pawlik Automotive in Vancouver. Vancouver's best auto service experience. 22 time winners. Can we even say 23, 23 times 23 time winners. Best Auto Repair in Vancouver as voted by their customers. Not just some guy, where we made it up. No, this is actual customers voting for this company to say they're the best. 23 times. You gotta be pretty proud of that eh Bernie.

Mark: So today going to talk about a Cadillac SRX 2015, that had a flex plate problem. What was going on with this vehicle?

Bernie: Yeah. So the vehicle had a flex pipe problem, and you're probably wondering, well, what is a flex plate?

So a flex plate is basically bolts under the back of the engine crankshaft. And it's where the torque converter, which is essentially a clutch for the automatic transmission, they bolt together. Flex plates on this particular GM vehicle, it has a ring gear, which the starter engages, and it's called a flex plate because the plate has a slight bit of flex. It's a thin metal plate that basically just attaches these two pieces together and the flex plate needed to be replaced.

Mark: So why, what was wrong with it?

Bernie: The owner brought the vehicle to us. It had some noise at certain engine speeds, mostly at idle. And we spent a great deal of time, we'd done some work on the car, rear wheel bearings, and then he'd noticed a day later there's some other noise. So he brought it back. We had a look at it spent some time couldn't really find anything definitively wrong with it. We thought maybe there was an intake, manifold runner. We pulled some things apart. It's been a fair bit of time. Couldn't find anything conclusive. So we sent it back, said to him, you know what, drive it a little longer. See what happens. About a few days later, he was back, the noise was much worse and we were able to determine the flex plate itself was actually cracked. That's, you know, something that does happen to them over time.

Mark:  How did you tell, was it a distinct noise that you were able to tell that it was the flex plate?

Bernie: It is a distinct noise. And it's interesting because as I mentioned, we had the vehicle in earlier and we'd spent a lot of time looking at it, and it wasn't making that kind of distinct noise. Usually a flex plate will make a kind of ting, ting, ting, ting, ting, kind of noise. Like someone banging on a little plate of metal you know, often most noticeable at idle or even if you're in drive at an idle speed. And often once the engine speed picks up the noise disappears.

I actually got really familiar with this noise early on when, I think I was about 18 years old, I bought a 69 Dodge Dart Swinger 340. Kind of a cool car. You know it had a fair bit of mileage on it. And all of a sudden I developed this horrible noise in the engine and I thought, that's it, the engine is blown. So I pulled the engine out, rebuilt it, but I found out the flex plate was actually the problem. So I got very familiar with that noise at a young age. So yeah, so there is a very distinct noise. And interestingly enough, for this Cadillac, it took a while for us to actually find it or to actually hear it as a distinct noise.

It could be that the design of it is a little different than you know, say that the Dodge that I had in the past.

Mark: So do you have some images? Some pictures.

Bernie: I do, let's have a look. So we'll start with a picture of this 2015 Cadillac SRX, kind of an SUV ish looking vehicle.

Bernie: Yeah, they left those off, like probably around the year you were born Mark or something. Yes, the no fins. I find it funny when I look at it, I go, that's a Cadillac. Like it's a Cadillac in spirit, but you know, not really in looks like we're used to from the past. 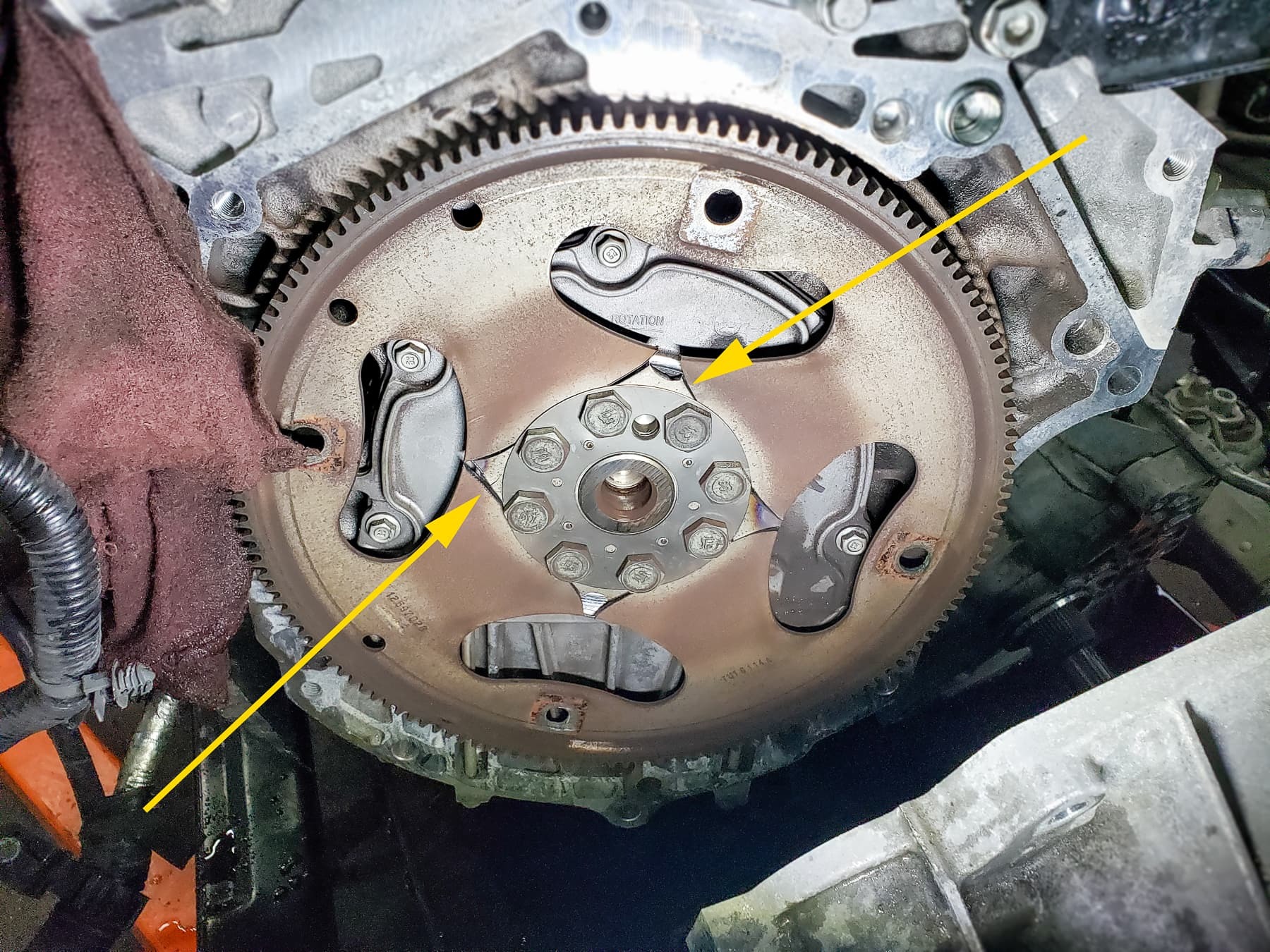 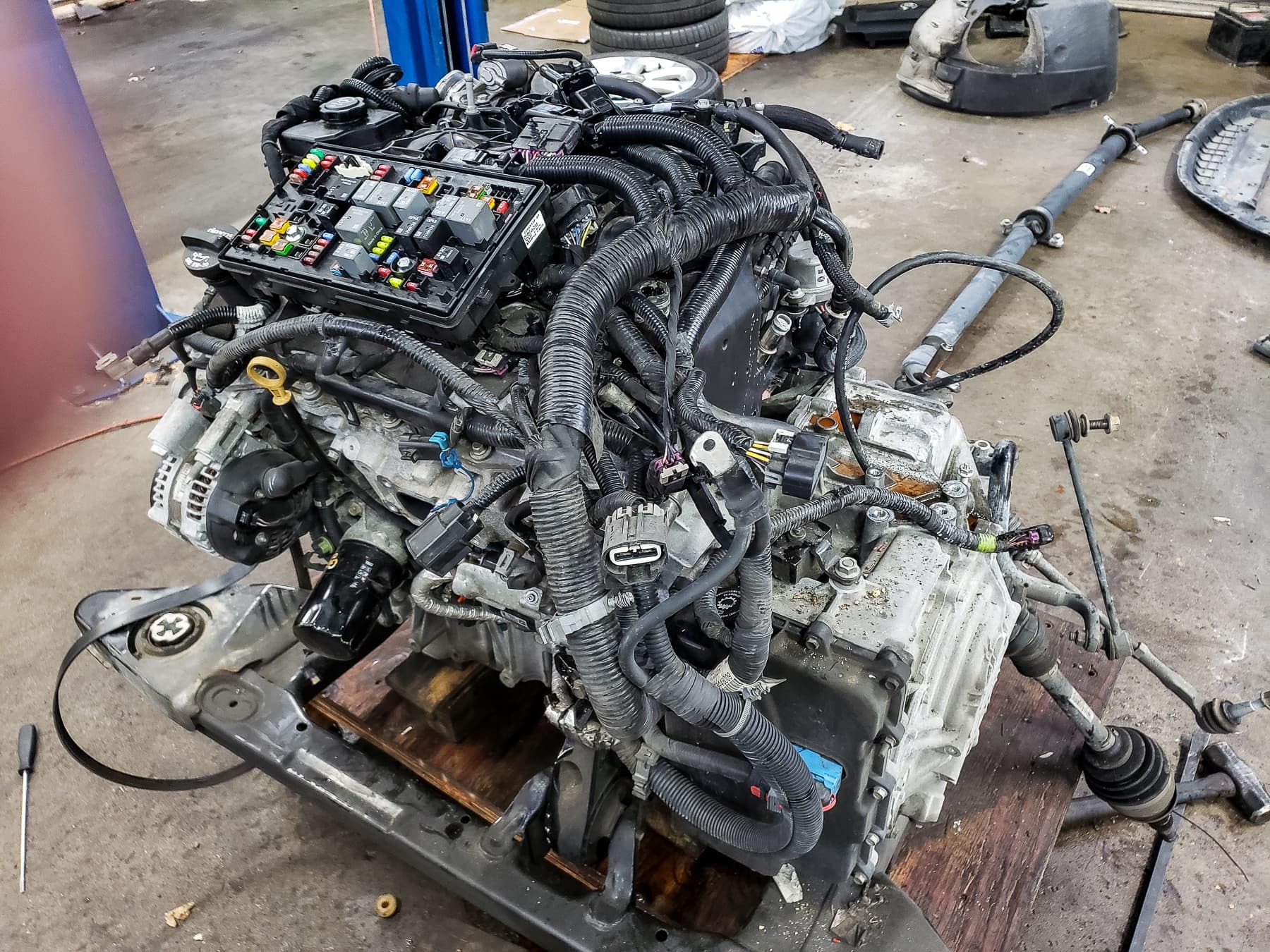 So that's basically what was causing the problem. Of course, as you can see if you left it long enough, this thing would eventually break and strip and the engine would just spin and the transmission wouldn't move anywhere. I've never seen that happen. It would take an awful long time for that to occur.

One other image we have here, this is the engine and transmission. So this is basically a drop the whole drivetrain out of the vehicle type of job. So it's a lot of work. There's the engine, transmission, you know, the fuse block comes with it. This is the subframe cradle underneath one of the drive axles.

It's an all wheel drive car. So you can see the rear drive shaft lying on the ground here. We do these jobs quite frequently, not necessarily on Cadillacs, but these, you know, sub frame removals, there's a lot of parts and pieces.

Mark: So are cracked flex plates, a common problem on vehicles or on Caddy’s.

Bernie: We see it from time to time. We've never seen it on this particular model of Cadillac. And I mean, this is a common engine, so I'd expect that, you know, it happens from time to time. We probably do one or two flex plates a year. It's really not a very common job, but as I said over the years it's something that does happen to vehicles.

Mark: So, how are these fin free Cadillac SRX vehicles overall?

Bernie: Well, they don't require any maintenance on the fins, there's less waxing and washing to be done, that's for sure.You know they're pretty good. This vehicle has about 225,000 kilometres, so it's got very high mileage. You know, he's had a few issues with it. We've been servicing it for a little while. You know, wheel bearing or two that's gone bad, you know, a couple of seals, differential seals, but overall pretty good vehicle.

And once we did this repaired, it sounds like a brand new car and runs really well. So I'd say they're pretty good. I don't know of many other problems with them. We don't see a lot of them and haven't seen too many problems with them. So overall I'd say they're a pretty good car, but they're complicated, there are things that'll go wrong, a little more expensive than your sort of basic Chevy.

Mark: There you go. If you need some service on your Cadillac or any GM product or any kind of product basically. Vehicle, light truck in Vancouver, the guys to see are Pawlik Automotive. You can reach them at (604) 327-7112 to book your appointment, you have to call and book ahead. They're getting busier and busier and busier. As they keep winning and winning and winning, and they're doing a great job. So you got to call and book ahead in Vancouver, BC, Canada.

Or check out the website pawlikautomotive.com. There's hundreds, not exaggerating, hundreds of videos and articles on there on repairs, on all makes and models and types of vehicles and types of repairs. YouTube channel again, hundreds of videos. Pawlik Auto Repair. Check it out. And thanks so much for watching the video and checking out the podcast. We really appreciate it. Smash that button. If you like what we're doing, I hate that. Give us a like, if you like what we're doing. Thanks Bernie.

Bernie: Thanks Mark. Appreciate you watching. Thank you.