Mark: So today's victim is a 2015 Jeep Cherokee that had a transfer case problem. What was going on with this Jeep?

Bernie: Yeah, so the owner brought the vehicle to us. There was a warning light on the dash. That was his primary concern, it said service transfer case.

Bernie: Well, first off a good road test the vehicle to see how it's driving and we noted everything seemed to feel normal. From there we plugged a scan tool in, interrogated all the vehicle computers found some trouble codes stored in the transfer case module. Did a little further research and testing and found the transfer case itself was the fault.

Mark: So how do you go about repairing that?

Bernie: Well, in this case, we look for whatever options are available. Do we rebuild it ourselves? Who sells them? What's available. We found that the best option is actually to buy a transfer case directly from the Chrysler dealer. In this case I'm not certain it's rebuilt that did have a core charge on it. Sometimes they don't specify whether it's rebuilt or new, but certainly look brand new when we put it in. But that's basically what we did. We found that was the best price option for the vehicle.

Mark: So, is this a unique transfer case or is it a typical American trucks style unit?

Bernie: No, it's actually different. So this vehicle is not like your usual, I'll say like the larger Jeeps. It used to be that the Cherokee was like the smaller version of a Grand Cherokee, or I think it started as a Cherokee. Then they made a bigger, like a lot of manufacturers. They seem to just keep making cars bigger and bigger all the time.

So the transfer case is quite different from, at least the larger style Jeeps that normally a Cherokee is. It's a redesigned vehicle.

Mark: You have some pictures?

Bernie: I do. So there's our Jeep, 2015 Grand Cherokee and some closeups of the transfer case. 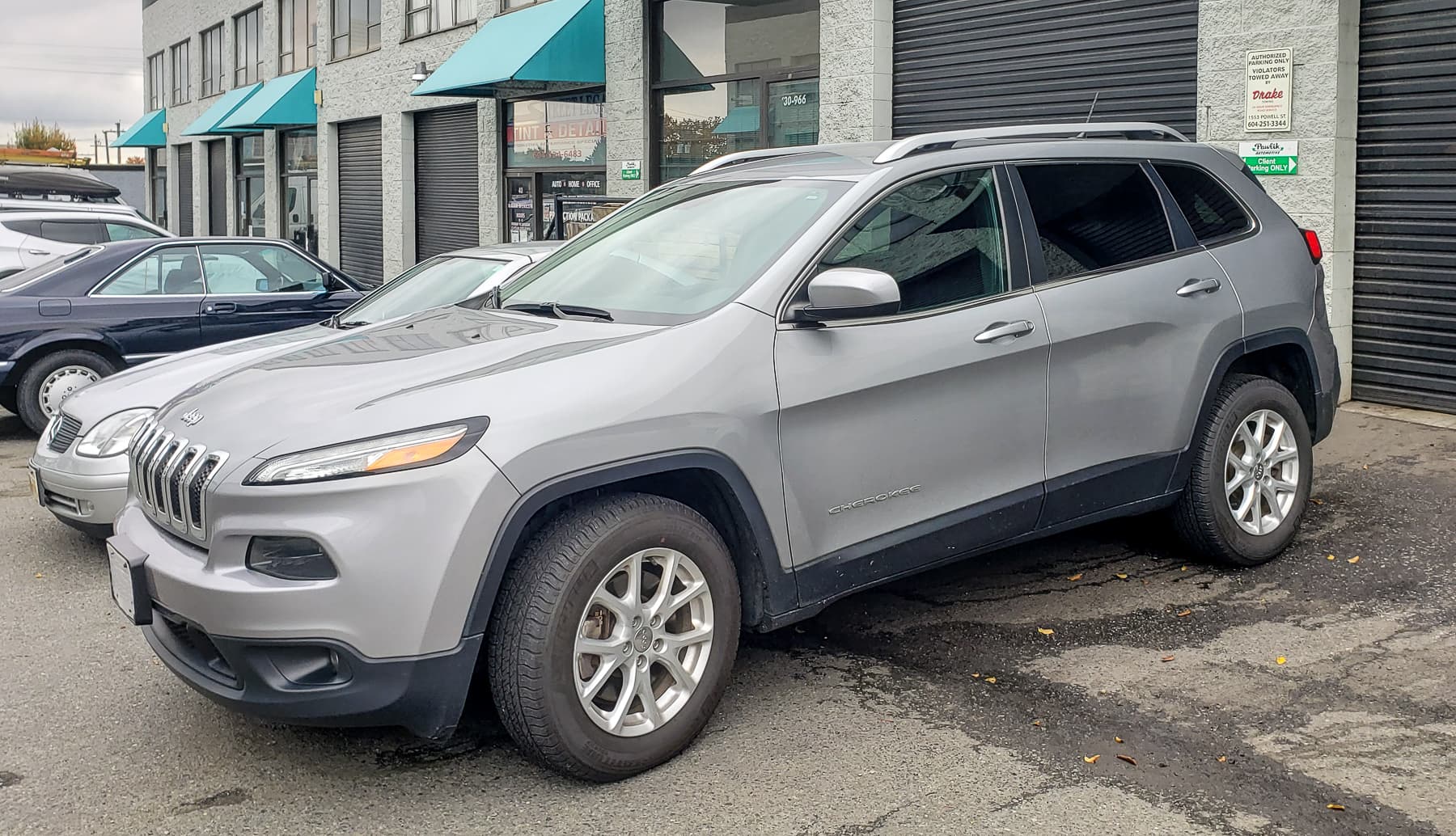 There's a view of the transfer case, the replacement unit that we put in. You can see on here, there's an electronic module, common to all transfer cases these days. Long gone are the days of having mechanical rods or cables to shift things. It's all got complicated. 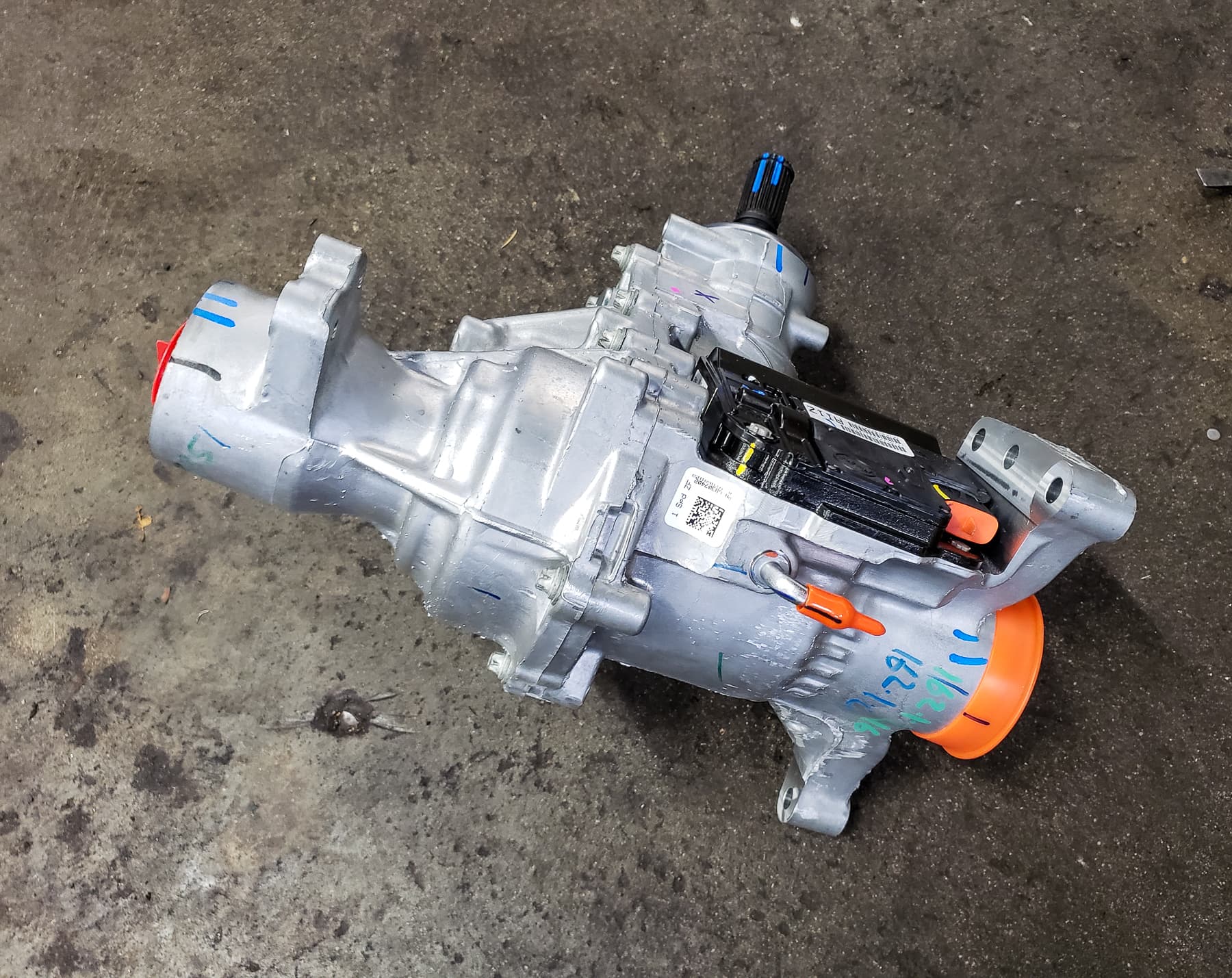 So this is where the transfer case bolts up to the transaxle. This is the spline that drives to the rear drive shaft. And then you've got your output to the right axle shaft, and then the left axle shaft. The driver's side would normally go right straight through the transmission and right into the transfer case. 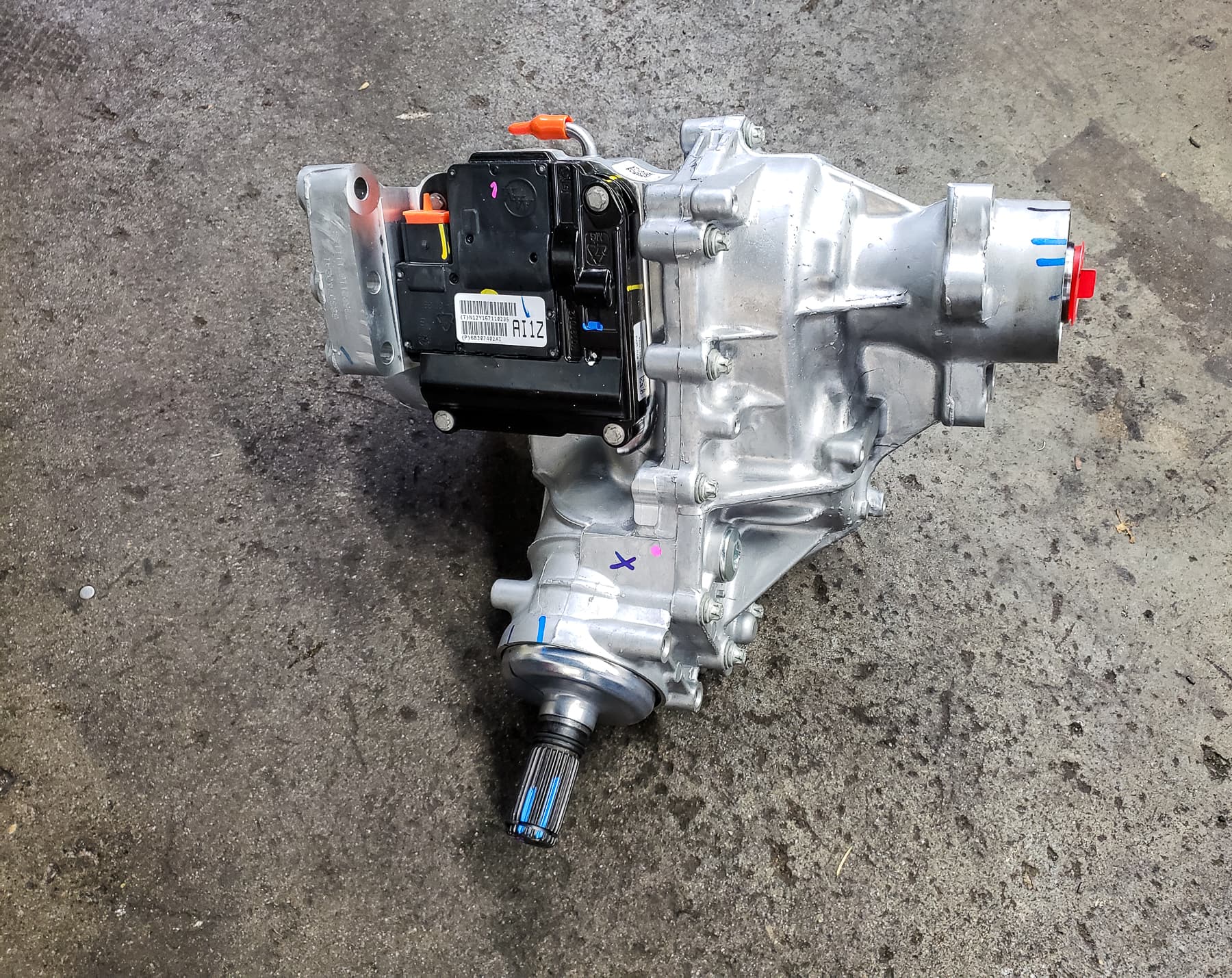 So that's kind of a view of the two units. I'll just show the other view again, just to get a kind of an idea of it. Again, the rear drive and there it is. So, as I said, it's supposedly a remanufactured unit. And by looking at these markings, it looks to me like these are sort of remanufacturing marks, but it sure looks brand new. However, they clean it up they sure make it look pretty decent. So that's our short picture show for the day.

Mark: So did you have anything to do with electronics after you replaced the unit?

Bernie: No, it actually was a nice plug and play operation. We expected we'd probably have to reprogram it afterwards, but it didn't require it.

So once we put it in you know, fired everything up road tested it, cleared the codes, drove it, everything, no warning lights were on, everything operated perfectly. So no issues whatsoever, which is kinda nice because there's so many vehicles where anything electronic has to be reprogrammed for the vehicle.

I don't know why the computers just don't talk to each other, but for some reason, a lot of manufacturers just make it too complicated for some reason, but this was straightforward. Surprising.

Mark: How labor-intensive was this replacement?

Bernie: Yeah, it was a fair bit of work. So I mean, they really wedged this thing in there. When we first looked underneath it, it looked like you'd have to drop the subframe, which looked like an awful lot of work just to get the transfer case out. But of course, you know, we do look at the instructions in the repair manuals. They said not to do it, we didn't have to do it. It actually does come out, but there's an awful lot of work required to get it out.

The exhaust system has to be removed and exhaust manifolds and certain things just to access it. But once, once everything's accessed property, then it comes out. But it is a lot of work, fairly labor intensive, for sure.

Mark: So again, why would you not just rebuild it yourselves?

Bernie: You know, with a transfer case like this, like I was talking about the olden style of transfer cases where they basically, there was a mechanical linkage to it. Those are really pretty straightforward to rebuild it, just gears, chains, a few other items inside. And even if it has a module on it, even sometimes that isn't make it too complicated.

With these type of all wheel drive systems, there's a lot of complexity. A lot of things that are monitored and like slipped clutches and things like that to provide a nice all wheel drive feeling to the vehicle.

It gets really complicated to rebuild them. And if we'd found something, there could be something wrong with the module on top of that. So it came as a nice unit from the dealer, nice package. It just made more economic sense. And the final bill was not really anything more than it would have been if we have to do a full job. So in the end, it just made more sense to replace the unit.

Mark: How many kilometres run this Jeep Cherokee?

Bernie: Only 69,000. So not really a lot. I would expect the transfer case to have lasted a whole lot longer, but again, even on Grand Cherokees, we've run into a lot of problems with transfer case modules and things that tend to go faulty. So I think it's a bit of a I mean, this is a different design than a Grand Cherokee, but I think there's a bit of an issue going on with the electronics and some of these Jeep four wheel drive systems that it's a bit problematic.

Mark: If you're having trouble with your Jeep in Vancouver, the guys to call are Pawlik Automotive. You can book online on their website pawlikautomotive.com. Or give them a call 604-327-7112 to discuss your repair. They'll check it out exactly what's going on. They'll get ready for you. Book your appointment, you have to call or book online to get in. They're busy always. Or you can check out the YouTube channel. Pawlik Auto Repair, close to a thousand videos there of all makes and models of any types of repairs. Over 10 years of doing this. And of course, we really appreciate you listening and watching. Thanks Bernie.