Mark: So today's victim is a newer 2015 Jeep Grand Choki Cherokee with a diesel engine. What was going on with this vehicle?

Mark: So, what kind of testing process do you go through when the check engine lamp comes on?

Bernie: Well, the first thing to do with the check engine light is to hook up a scan tool to the vehicle computer and scan for codes. So that was the first thing we did. There was one code stored P01 28, I can't remember how they describe it here, but essentially I think it says thermostat rationality or temperature rationality. And essentially what it is, is the vehicle isn't warming up fast enough.

Mark: So, I know we've talked about this before, isn't that all you need to do? You plug the computer in that tells you everything you need to do and what to fix?

Bernie: The short answer is no, it doesn't. And many people believe that to be the case, but that's not true. I will say though, that this is one trouble code where you can almost be sure that the part to replace almost always indicates the thermostat is bad. But it's not always true, and it's always good to verify the issue because there are some other things that could cause that code, such as a bad temperature sensor or an air intake air sensor. So it's really important to make sure that all the sensors are working properly. It could also be a computer programming issue as well.

So how this works basically is the computer is a program and it knows that when you start the engine within a certain amount of time, the engine should reach normal operating temperature, whatever that is set in the computer, probably like 195, somewhere in that range. And it should happen within a certain amount of time. And the computer will take into account what's the air temperature out because if for instance, I'll just use Fahrenheit, say it's an 80 degree day in Vancouver or Southern California, wherever it is, you know, the engine should warm up quite quickly.

Whereas, you know in Vancouver right now, it's in negative Celsius temperatures where, you know, just a bit below freezing, like 32 Fahrenheit or like zero, it'll take a while to warm up. So the computer knows that. So what'll happen, of course, is if the engine doesn't warm up in the right time, it'll set this code off.

So to answer your question, there are further steps we take. This is actually one of the simpler. codes. A lot of 'em are way more complicated because the code might go off, but it usually indicate something else is causing a problem. A sensor just picked up an issue. So in this case, it really is a programming issue. The vehicle senses that something is happening at the right time.

So our next line of testing is to go out and road test the vehicle thoroughly with the scan tool, watch the engine warm up and see how it warms up and maybe turn the heat on in the vehicle, see how it's warming up.

Bernie: So we did find that in fact, the engine was not warming up to proper temperature.

It took a very, very long, I think it did actually reach proper temperature. It took like 15 or 20 minutes of driving before it did that, which is far too long in a car like this. Even at that cold temperature. So first place we start, like all the other sensors, it's best to take the readings of those when the engine's cold and you got a good parameter that, when an engine's cold, the air temperature sensor and the coolant sensor should be reading exactly the same number, you know, give or take a couple of degrees. So we did verify that was a case.

So from there the prescription is to, and of course we do a visual inspection to make sure the coolant level isn't low or something's wrong with the actual coolant, which we found was fine. So the the diagnosis was basically replace the thermostat would be the thing to do. And then of course, after we do that, then we need to verify and retest.

Bernie: Yeah, so we replaced the thermostat you know, refilled the cooling system, warmed everything up. It warmed up normally and everything was fixed. And let's just look at some pictures.

Mark: Is this a difficult repair?

Bernie: No, it's actually, surprisingly quite simple to do on this engine. You know, these diesels can be very complex from time to time. This is the engine with the top cover removed. And so this is the three litre engine, so it's a 2015. This is the newer style three litre. The original three litres were were the Mercedes-Benz engines, the ones they used in the mid 1990s. Sorry, mid 2000s, decade out there, they use a three litre Mercedes engine. We've talked a lot about those, and there's slews of problems with those. 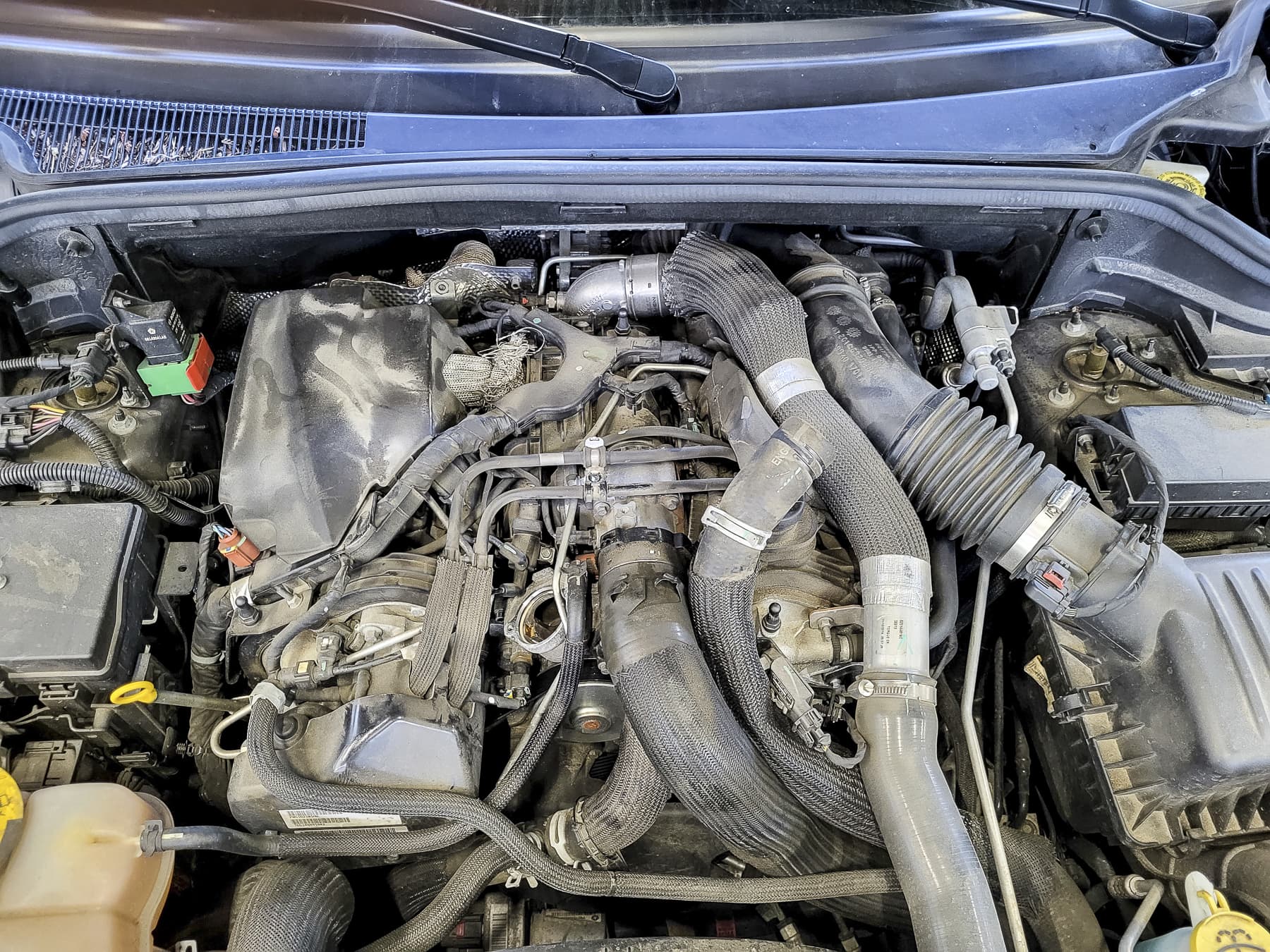 This is an Italian sort of designed or built three litre V6 diesel. Anyways thermostat sits right here where I'm kind of circling here. So this is kind of the view of the engine. You've got air intake hoses, there's the main air intake hose, turbo hoses. Looks kinda confusing, but this where my mouse is moving here, this is the upper radiator hose that we just removed from the thermostat.

This is a thermostat housing. This is where the thermostat bolts in. So very accessible, nothing much on top of it, which is a treat. So many times on cars, you have to undo 10 things just to get to a simple component. And in this case, it actually wasn't very difficult to get to. 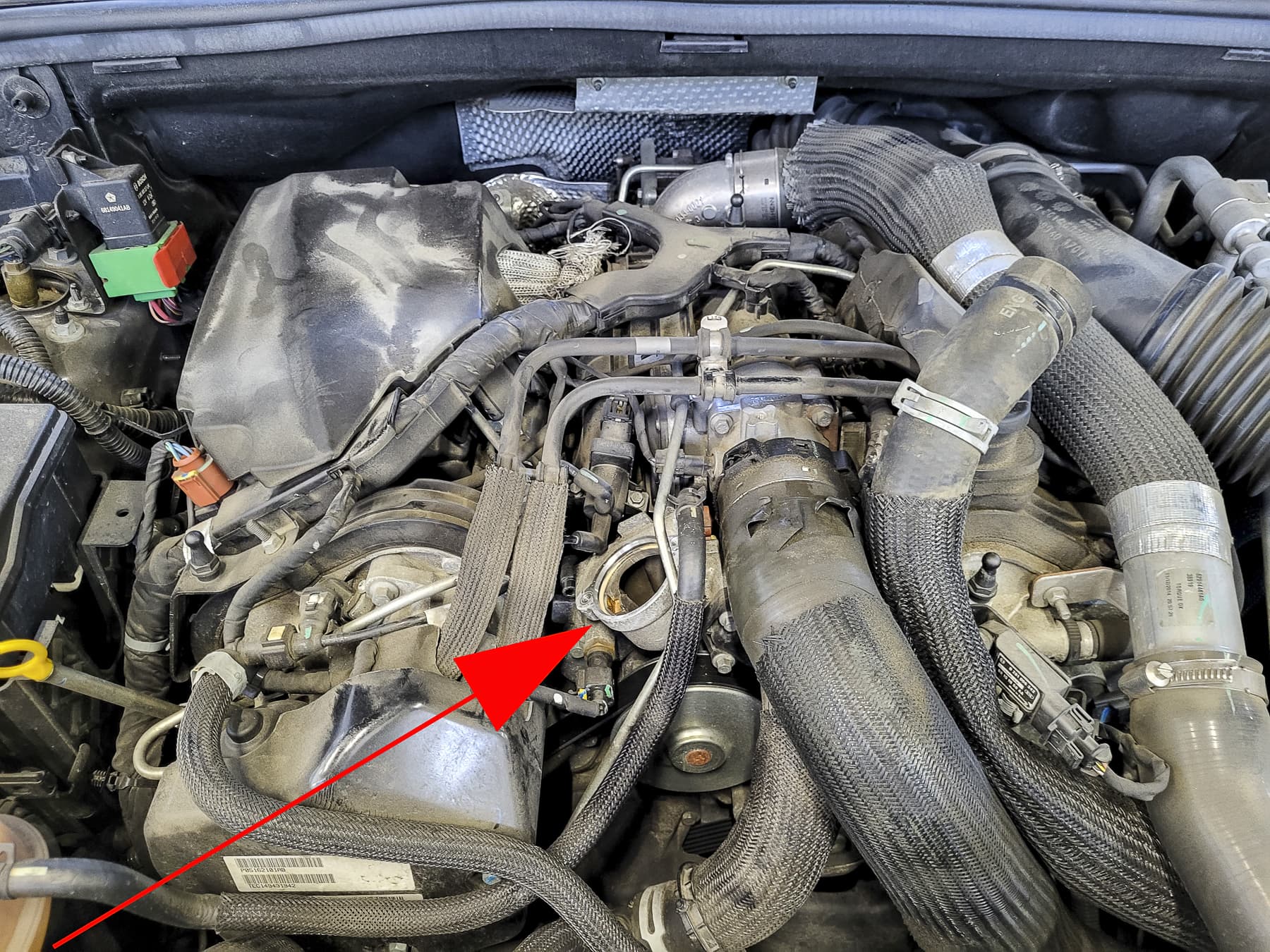 And then finally, here's a view of the thermostat. So this is the new unit, plastic housing. Kind of typical of any modern vehicle. Comes as a complete unit. The thermostat is incorporated right into the housing. It's not a separate piece like it used to be. You know, like in the past, a lot of times the thermostat would be separate and many cars it still is. But this is the piece here. 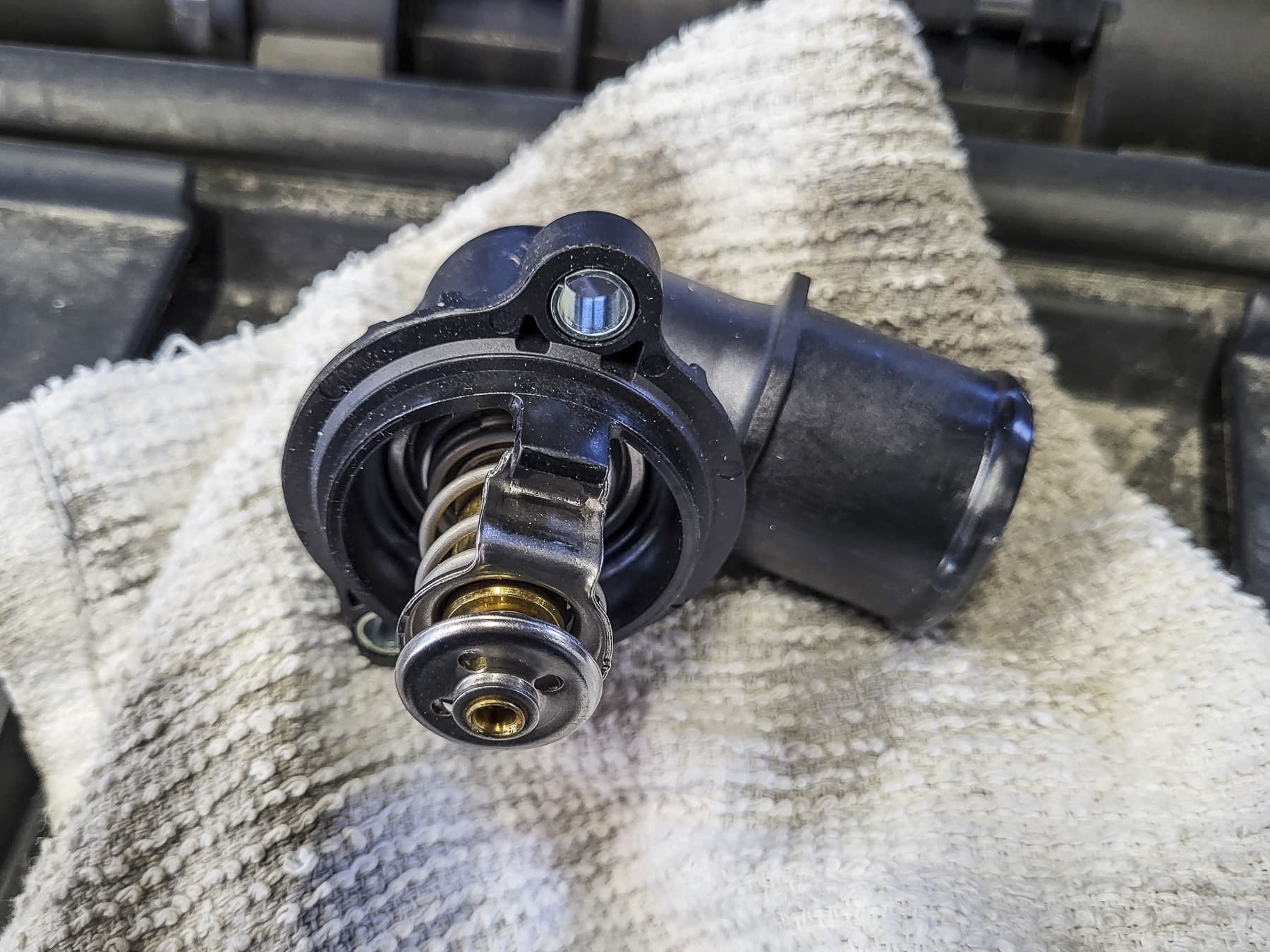 So you replace it all. Gasket, housing, thermostat, theoretically if all goes well, nothing leaks, but of course being plastic these kind of things are prone to leakage and warpage and things like that over time.

Bernie: It's a pretty common repair on a lot of vehicles. I was thinking like Mazda 3s, Mercedes, those are some of the cars we do a lot of repairs for this particular trouble code. I can't say for sure in these Jeeps, we don't see too many of them. They're not really common with these diesels, but it is the same engine that's used in Dodge trucks as well. The Ecodiesel, as they call them. Nice little friendly word. Yeah. There's like the Ecodiesel and then GM has their Ecotech engines. And Honda, I like Honda's the best, the Earth Dreams, it's like a plate on top of the engine. I'm going, what the heck does that mean?

But anyways, yeah, this is the three litre Ecodiesel. So we haven't seen too many of them do that, but I would expect that it, you know, it'll happen from time to time.

You mentioned the three litre diesel. How different is this than the Mercedes version in the mid 2000 Jeeps?

Well, I haven't really dissected and torn these apart, but I'd say a lot of the issues of the Mercedes, like engine oil cooler leaks are not something you see on this particular vehicle because the engine is designed differently. And I try to do a little research before doing this podcast just to try to get a sense of how the engine's kind of put together.

And I wasn't able to dig up as much as I would like to have, but essentially, there's a lot of quirks to the Mercedes that are not featured on this particular engine. So I think overall, you know, we haven't seen too many problems with them. Although I do have one client with a Dodge 1500 Ram. Same three litre diesel engine and the bottom end's knocking. You know, low oil pressure bottom end's knocking, the engine's blown on a very well maintained vehicle at just about a hundred thousand kilometres. So, real disappointment and apparently an issue on a lot of these vehicles. So perhaps the bottom ends are not built as well as they could be. That's really kind of unacceptable.

The three litre Mercedes with all the problems they have is actually a really good solid engine and there's no reason why you couldn't get half a million kilometres or more outta one of those engines. But over time, those other ones you'll have oil leaks to fix and sometimes timing chains and intake manifolds and turbos and things.

Mark: And it must be maintained rigorously.

Bernie: Rigorous maintenance is absolutely the key and proper driving. And by that I mean, you've gotta warm the engine up. At least some of your driving routine has to be hot highway drives, preferably hauling loads. But this is a Jeep, so you're never gonna be hauling loads like you would in a pickup truck.

But now, as I said, we have one client with a well maintained, changing the oil regularly engine that's failed. So, but you know, it's like health. You know, if you're eating junk food, you might live to 90, but chances are if you eat well and you know, take care of your body, the odds are much. So cars are no different.

Mark: If you're looking for service for your Jeep diesel or otherwise, in Vancouver, they repair tons of them. Pawlik Automotive. You can reach them at their website to book pawlikautomotive.com, or you can call them (604) 327-7112 to book. You have to call and book ahead or book ahead online. They are always busy. Check it out, pawlikautomotive.com. Thanks Bernie. Thanks for watching.

Bernie: Yeah, thanks for watching. Thanks, Mark. Always a pleasure.