Mark: So a 2015 Jeep Grand Cherokee. That had a limited slip differential problem. What was going on with this vehicle?

Mark: So how did you diagnose this?

Bernie: Yeah. We road test the vehicle, it felt fine. Plugged in our diagnostic scan tool and did a full system scan. This is sort of the best way. I mean, we could of gone right into the four wheel drive module, but the best thing to do on a modern vehicle, especially 2015, which is pretty advanced electronics, is to do a full system scan. So that scans every module in the vehicle computer from the engine to the power windows, whatever the vehicle equipped with, it scans the whole system and it reports on any trouble codes found. And so, we found trouble codes in a variety of different modules, ABS traction control, electronic limited slip differential, which is kind of where the area of concern we found lied.

So from there, you know, once we record all the codes and we clear them, drive it and see which come back. And that kind of gives us an idea. Because one code will often set a code in another module. So it's important to decipher which item is actually causing the fault.

So from being a little more driving diagnosis, we found that the fault clearly it was the electronic limited slip differential motor. There was a circuit problem with that motor.

Mark: So were there any more tests that you needed to do from there?

Bernie: Yeah. Well, now that we'd verified where the area of the problem was coming from, then we were able to test the motor, the circuits, make sure that see what component was bad.

And of course we consult the manufacturer's information when we need to, and their system is pretty simple. It's clear the code. Doesn't return. Is the wiring hooked up. If it returns the motors defective. So that's kind of their system. And in fact, this time it did work fine, but so often in automotive repair, I've seen it, you know, install known good part.

Well, sometimes the known good parts, a thousand bucks. So, you know, I don't personally feel that good about going, you know, telling someone, Hey, it's going to be a thousand dollars plus labor. It might not work. It's a good way to lose customers fast, but we did our tests and the motor turned out to be the problem.

Mark: So how difficult was it to replace this motor?

Bernie: It's pretty simple. This motor bolts onto the side of the rear differential and pretty straightforward replacement. Let's look at some pictures. 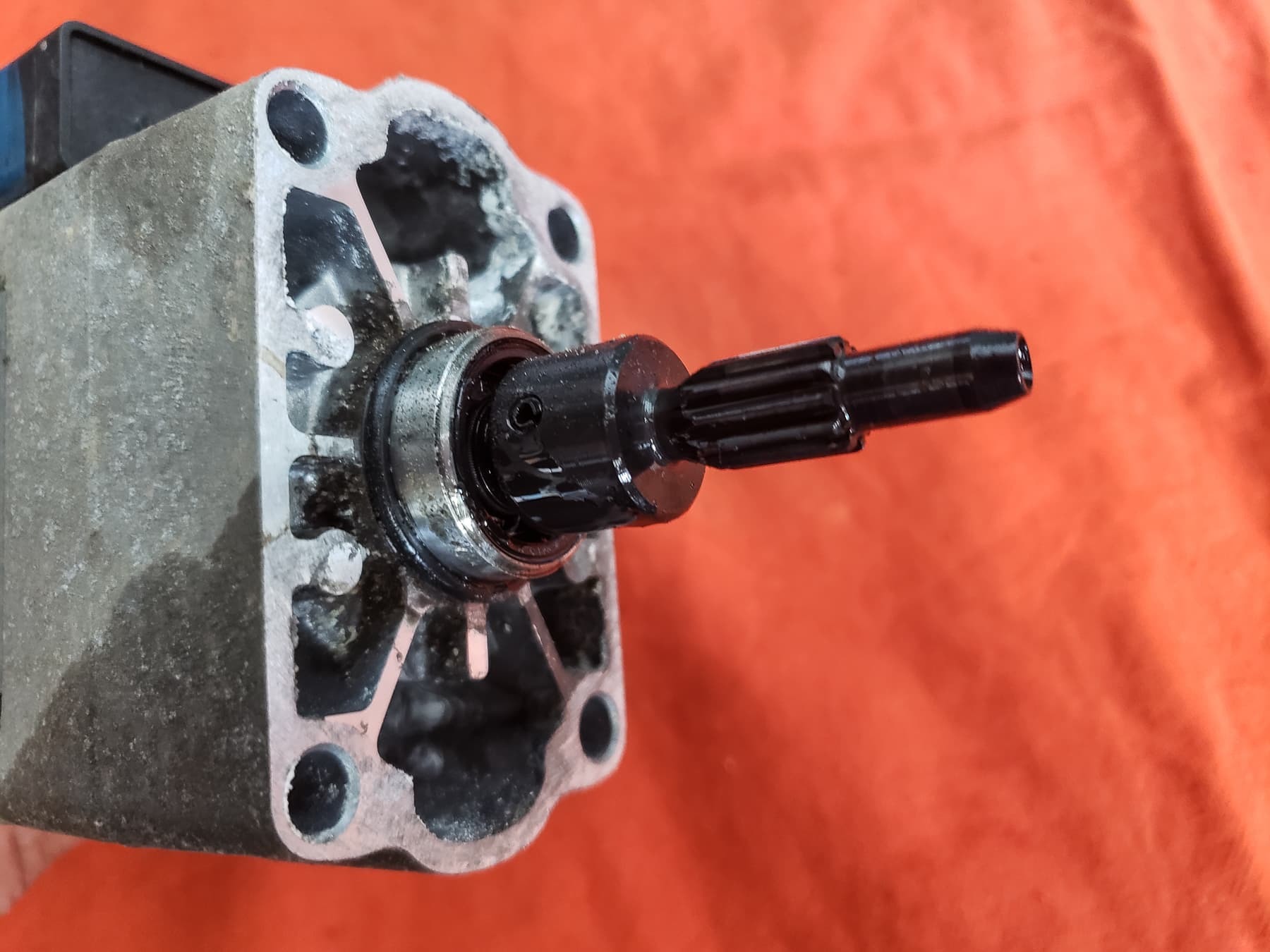 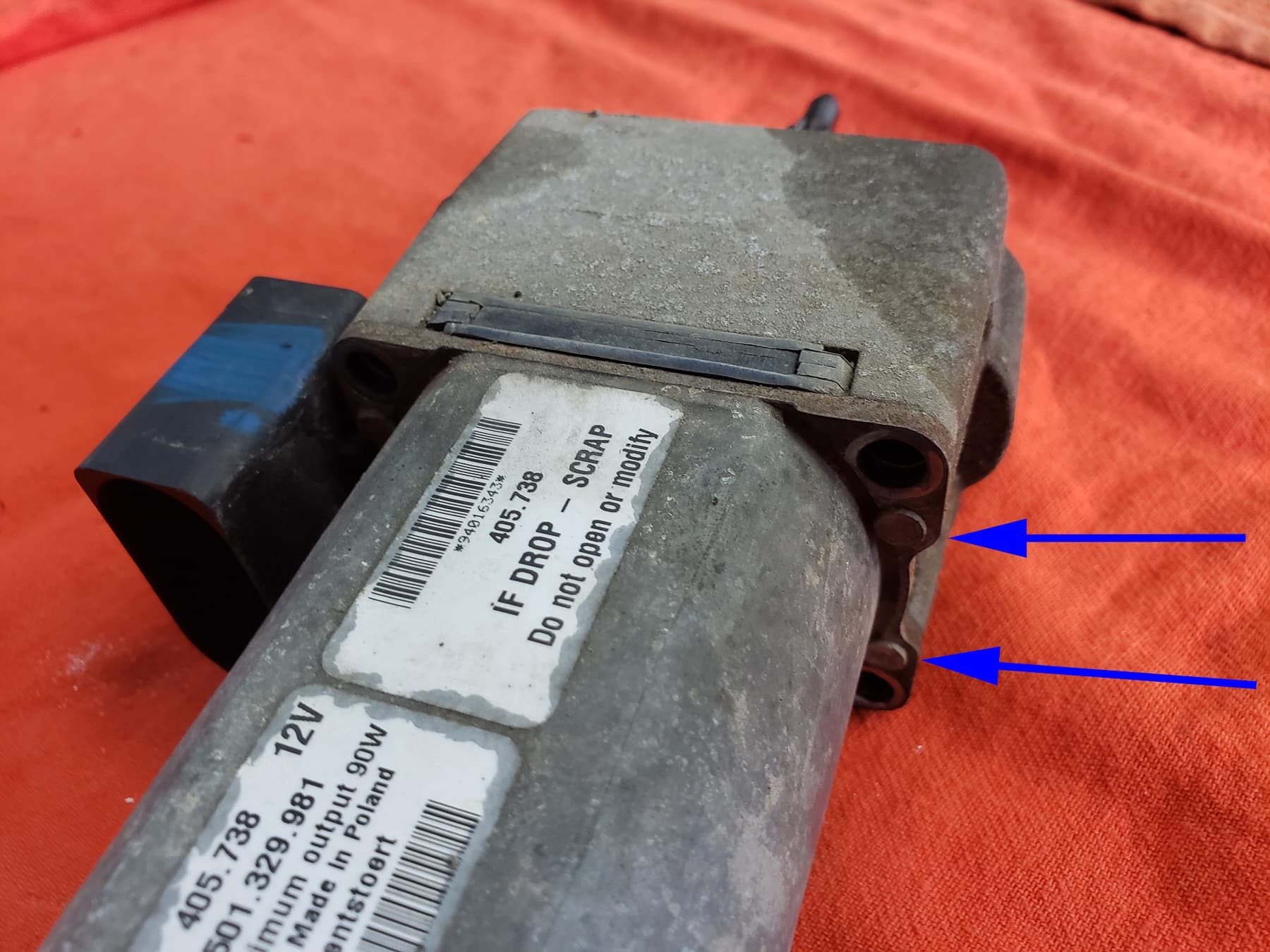 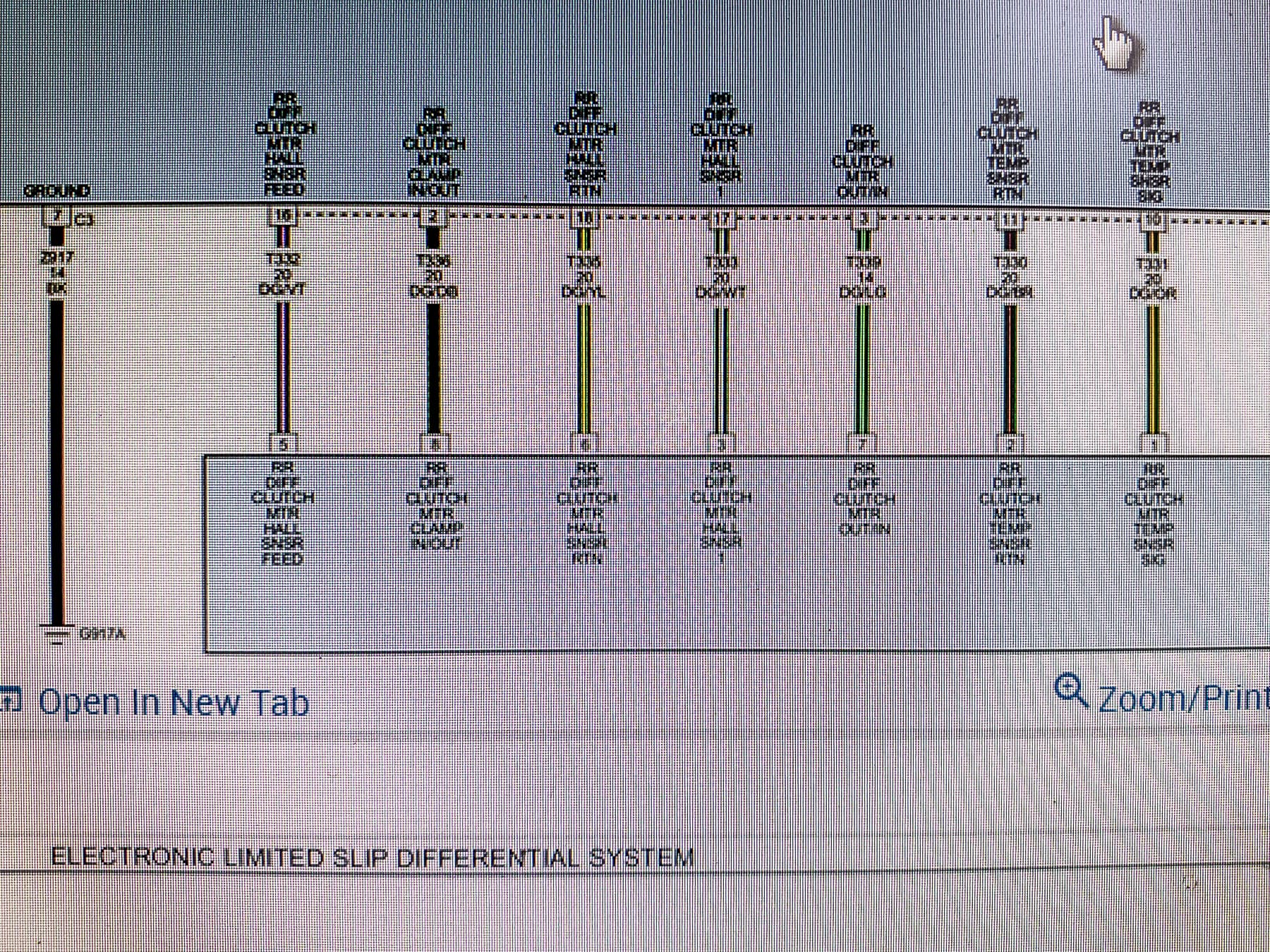 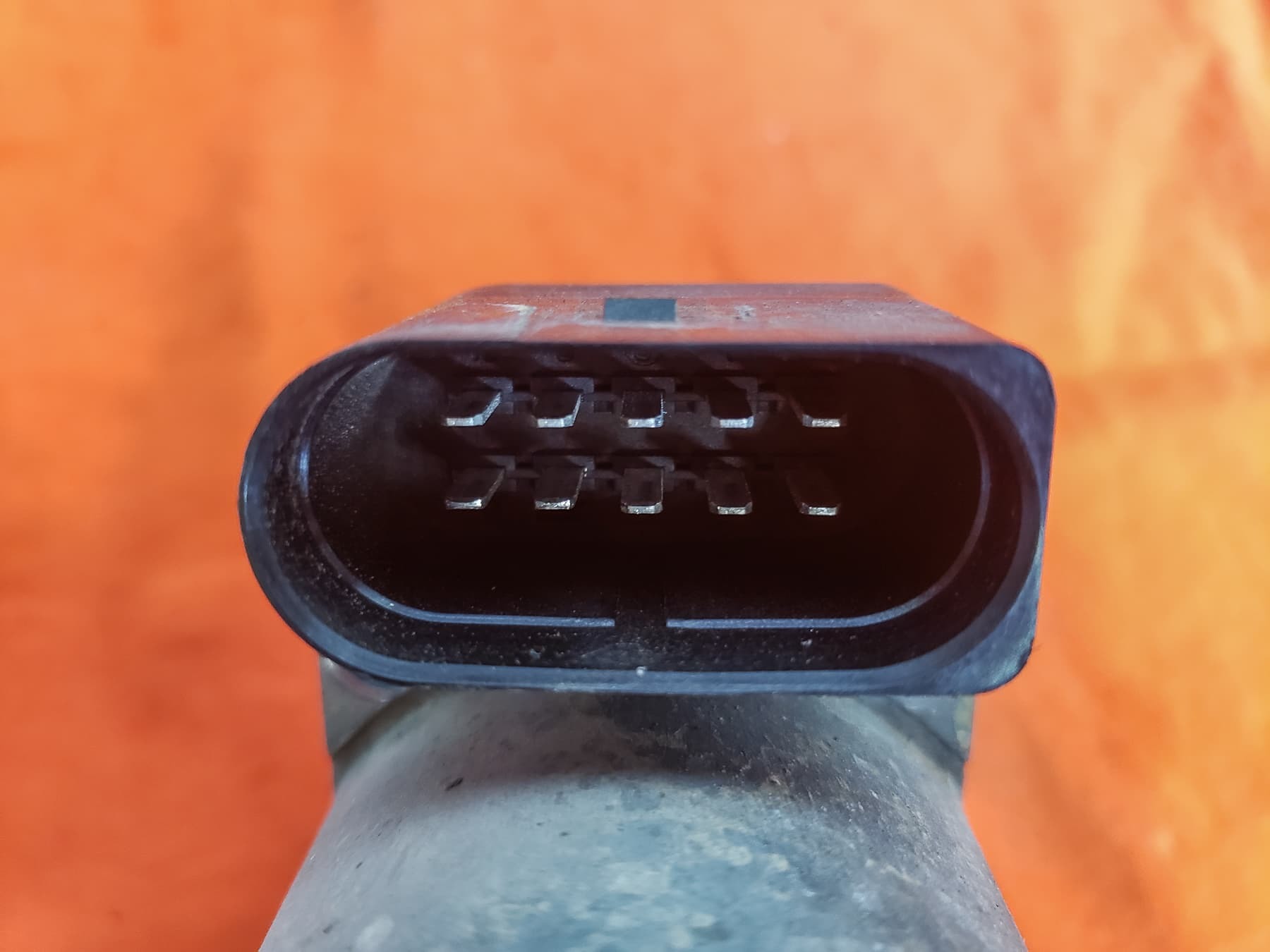 So there's our Jeep 2015 Grand Cherokee, fully loaded. These vehicles, they just get fancier every year, pretty cool vehicle. Good off-road ride. So let's have a look, there's the motor. Electrical connector here. There's a little drive gear here that operates the innards of the differential. And we'll just look at a few more views of the motor, but essentially there's several bolts, and this bolts right into this side of the differential case. No messy fluid to change, it's pretty straightforward and easy. Okay views. This is the gear that meshes inside the motor. You can see the mounting holes here for the bolts.

I found this stuff kind of interesting. The motor, it says if drop scrap, Do not open or modify. And then I kind of looked at it a little more closely and noticed that the whole motor is riveted together. There's not a bolt you can take apart to look at it. So this is a very integrated unit with sensors and obviously sensitive, like if drop, scrap. It's funny, interesting kind of English.

Wiring. So this is, you know, the electronics are complicated on these things, and this is like a, again, I'll just show these sort of things so you can kind of get an appreciation for the level of complexity that a modern vehicle has. You know, this is basically the motor here and differential clutch hall sensor, that's basically a position sensor. So the computer knows what position the motor's in, whether it's doing its thing and any of these things that don't quite work properly will cause the motor to malfunction and the whole system to go down. So again, clutch motor, there's a lot to this. And this is just the the rear differential. There's the electrical connector. And I think that kind of covers our picture show.

Mark: So, did you have to reprogram anything to get this motor to work properly?

Bernie: It's a great question, because on a lot of modern vehicles, the moment you change a part, the vehicle needs to be reprogrammed to accept the module and what it is. And in this case, it wasn't. So it made first kind of simple plug and play operation. But yes, there are a lot of vehicles where if you put a module and all of a sudden there'll just be an error code and nothing works and all systems down and you have to reprogram it. But fortunately for this, it's easy. And this is a bit of research we always do before we replace a part on a vehicle just to check with the manufacturer to make sure that it doesn't need reprogramming. So that way as a customer, you know what to expect when the job's done.

Mark: So I've replaced a couple of differentials in vehicles over the years. I've never had to put any kind of electronic stuff in there. Why are they using electronic controls in a deferential and what does it actually do?

Bernie: Well again control is the word and with electronics, as we well know, you can do things fast. You know, a lot of the switch time in these things is a hundred milliseconds. So that's pretty quick, you know, and so a computer senses a wheel needs to grip the road a little better. It'll just send that signal right away. And then the differential can make the adjustments, whereas on a normal limited slip differential, it's a bit crude. I mean, it works great, but you're not going to get necessarily the very best traction you could, unless you can actually send the torque to the wheel that you need to.

So this gives that capability to be able to do that. What's inside of this thing. I actually tried to do a little research and I actually don't know exactly how it works because through my repair information, they don't show, Chrysler hasn't released anything on what the insides are like on this. So I have to get a unit and take it apart and see at some point, and I know that'll happen at some point in time.

I looked at an Eaton video, which this may be an Eaton unit I'm not sure but they have a video on how the system works. It's kind of interesting to watch.

Anyways, you know, the clutches are basically electronically controlled and it's basically speed and operation and control and integration with the rest of the vehicle. Perhaps more torque needs to go to the front and less on the rear, you know, being an all wheel drive vehicle so this is what the vehicle can do. Much more control.

Mark: So 2015, it seems pretty new for replacement like this. How reliable are 2015 Jeep Grand Cherokees?

Bernie: Well, you know, I consider Jeeps to be a vehicle in the fair reliability department. There's a lot of things that tend to go wrong on them. They are, in all honesty, they are are complex vehicles. There's a lot more to them than most, but this vehicle only had 42,000 kilometres. So really not a lot of mileage. And in my opinion, this motor should have lasted a whole lot longer. So I think, you know, if you own a Jeep, I guess the easiest thing I can say is just expect you're going to spend a little more money to do repairs than you would a few on some other equivalent vehicles.

Mark: And does that accelerate a little bit, if you're doing a lot more off-road stuff, even though that's rarer and rarer for Jeeps these days.

Bernie: Yeah, well, there's certainly the risk of you go off road that you might bang or smash something, but it may actually in some way actually enhanced the life of some of the components, because they're actually meant to be used in these ways.

So sometimes lack of use can cause problems just as much as overuse. But I would say, yeah, if you're going out in the bush it might well do it. Like you said, a lot of these are city four by four. They don't really get used for what they could be used for.

Mark: So there you go. If you're city four by four, or off-road four by four needs some service in Vancouver. The guys to see your Pawlik Automotive in Vancouver, British Columbia, Canada. You can reach them at (604) 327-7112 to book your appointment, you have to call the book ahead. They are busy, always a line up to get in there. So got a call and check. Pawlikautomotive.com is the website. Pawlik Auto Repair is the YouTube channel. Hundreds of videos of all makes and models and types of repairs on there over the last seven years. And of course, thanks so much for listening, watching the podcast. We appreciate it. Leave us a review. Thanks Bernie.