Mark: So today's victim 2015 Land Rover LR4 that had a thermostat issue. What was going on with this LR4?

Bernie: Yeah. So the owner came into the shop with a complaint of a coolant leak. And we proceeded to do a diagnosis on that. And as you can guess, the thermostat was leaking because otherwise we wouldn't be talking about the thermostat, but that's basically the coolant intake was the issue they came in with.

Mark: So how do you find the cause of a leak?

Mark: So how difficult the replacement is the thermostat on an LR4?

Bernie: Well, it's a bit of a pain. This is a supercharged V6 engine. So the thermostat is buried down at the side of the engine. There's a number of things to remove and, you know, thermostats are a little different than they used to be, like in the olden days of thermostat wouldn't even cause a leak. It would be a thermostat housing gasket, but this is an integral thermostat. We'll get into a picture in a minute, but it's basically a plastic modular assembly with hoses of bolt in and out. And the thermostat sits in the middle. So you know, the plastic cracks or breaks deteriorates like it doesn't so many vehicles and that's what causes a leak.

There's our 2015 LR4. Little dirty from fall leaves that we get around Vancouver. 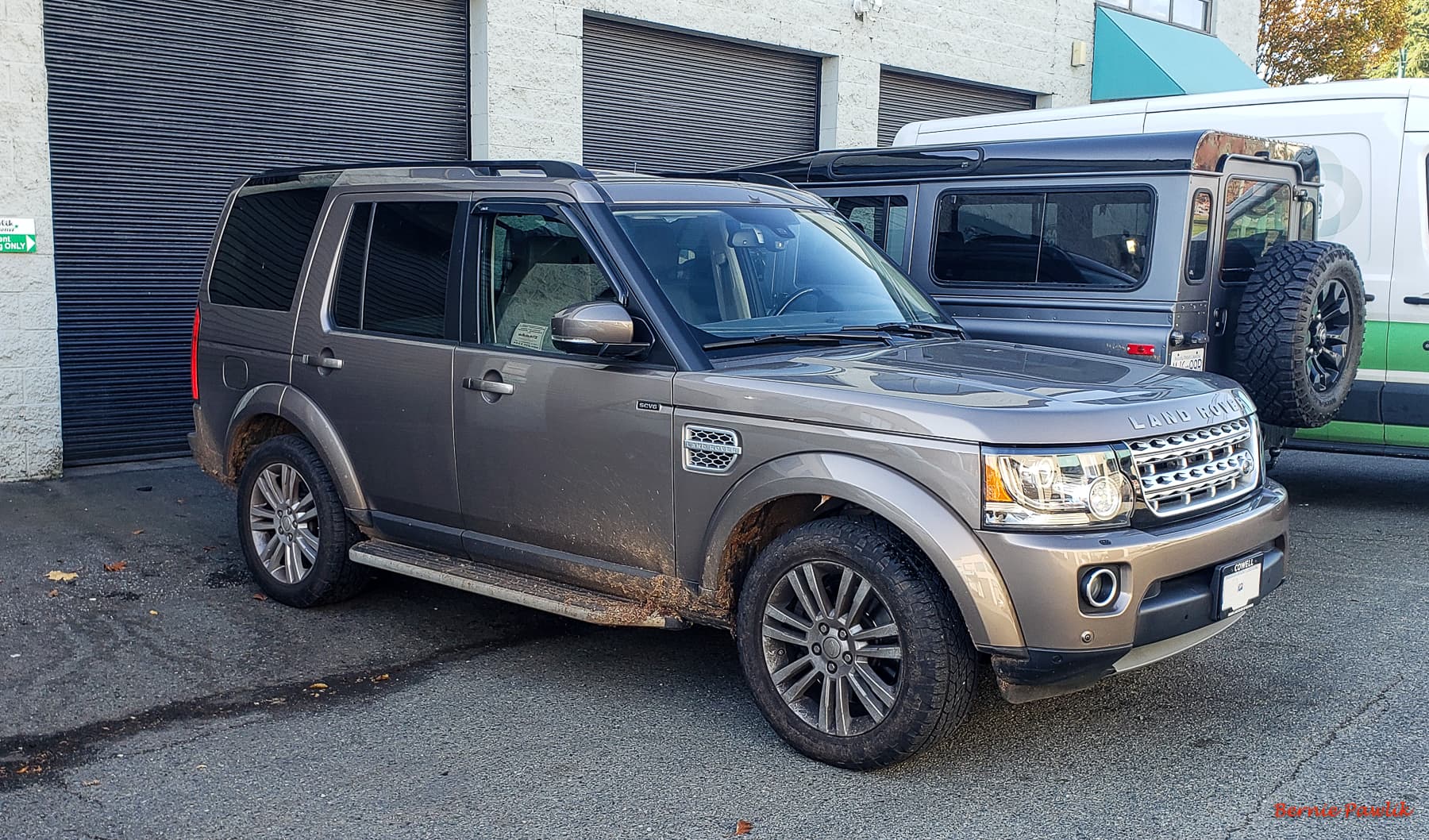 And there is the thermostat housing. That's the new unit. 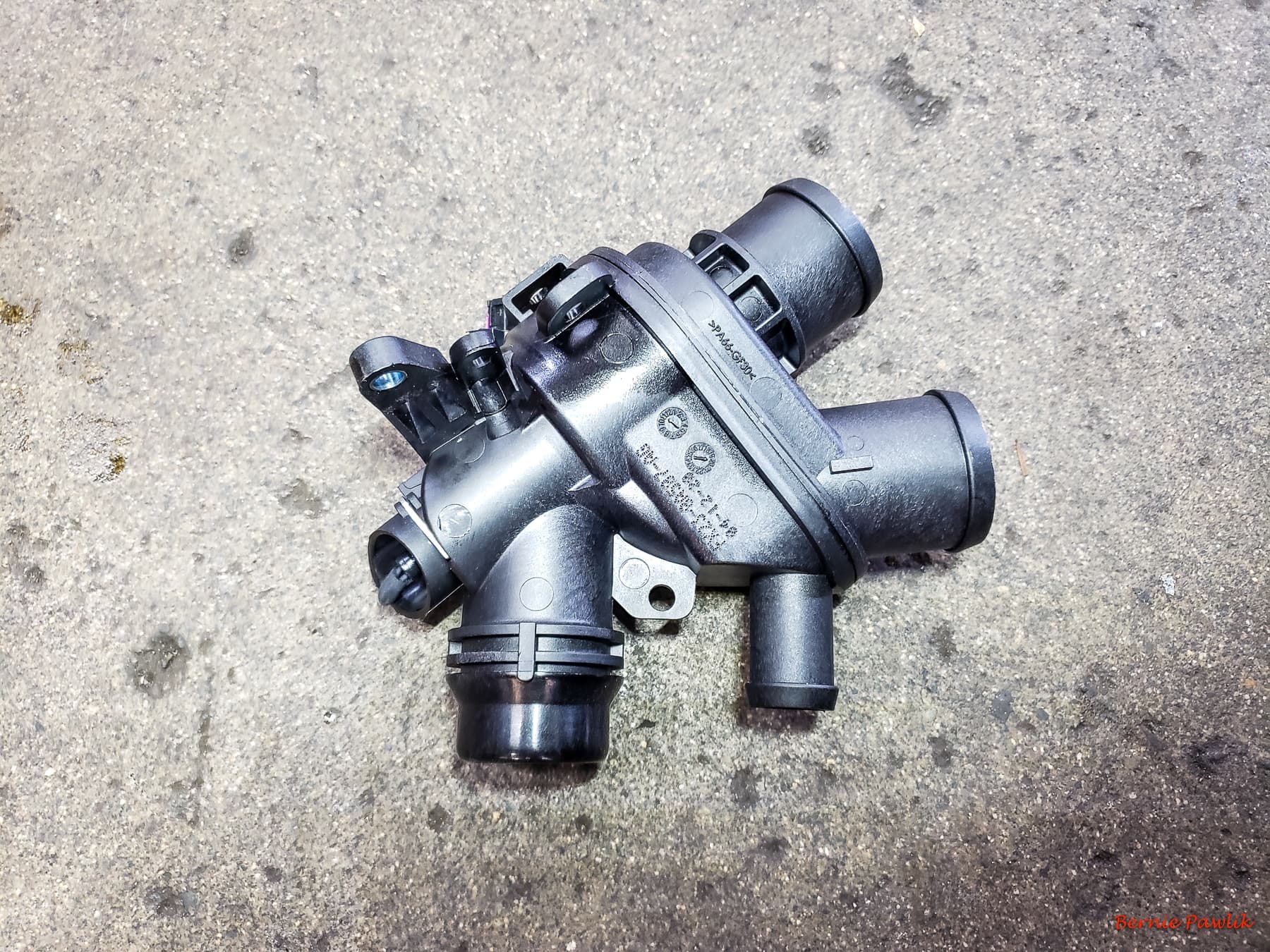 Where it's located just to get into that, is basically down where this arrow. This is what the thermostat housing out. But it fits down in this area here. 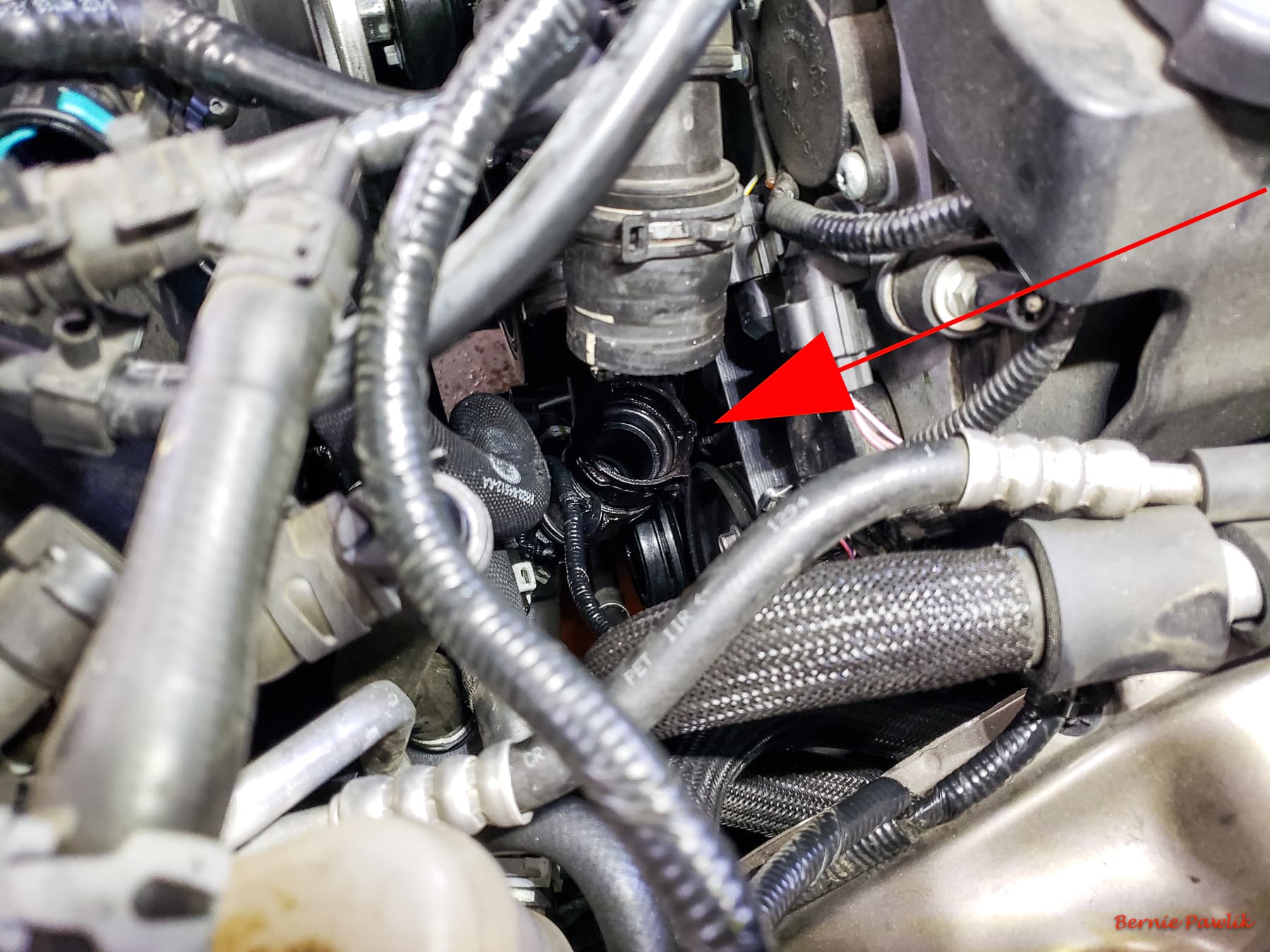 There's one of the radiator hoses that clip onto the thermostat. This is sort of down on the left front of the engine. You can sort of see the edge of the valve cover over here. So there's things in the way that need to be removed to get access to it. But we'll just look at this thermostat again.

So we have two radiator hoses. There's a small diameter heater type hose. And then the lower radiator hose fits on here. You'll notice there's a couple of differences in the way these fittings are. There's a little sort of fat nipple here, but this is straight. This one here has a clip on hose. Basically it has O-rings on the hose and slides on. Whereas these are clamp on hoses and you can see from this other picture here, these are the clamps here, and this is that clip on style hose down here. So a couple different methods.

The thermostat's located inside this housing. Now the leak, I didn't exactly look at it in any greater detail, but the leaks usually occur somewhere in this way they mold these houses, housings, not houses, housings together. So that's that's where the leak was coming from.

Mark: So was this the only thing you had to do during the service?

Bernie: Well we did a cooling system flush as well, which is a good thing to do whenever you take a cooling system apart. Unless of course it was some recent repair, but this is an original coolant. It's now six years old. It's a good time to flush it out and put fresh coolant in. It's the right age and the right time to do it.

Mark: Now is that an issue with removal? Could you've taken it out more gently to prevent breakage?

Bernie: Well, that's kind of what the owner said to us too. Couldn't you have done it more gently and not broken it. And my answer to him was no we do it as gently as we can, but what happens is, you know, these kind of clipped together hoses are designed really for assembly line purposes.

You know, when the vehicles running down the assembly line, they probably have a machine, but if they had a human with an arm, all you got to do is go click and the hoses on. As opposed to having some kind of screw clamp or pinchy clamp. So from an assembly perspective, it's really easy, but unfortunately, given time, the way these are designed, they cause oodles of problems on so many different vehicles. And you know, the problem is actually inside the hose itself. There's a plastic ring and overtime, they just get hard and brittle.

Now this vehicle only had 51,000 kilometres, so it wasn't really old and you think, oh, it should come apart and go back together. But it really they're just designed well for the assembly line use. And sometimes you get lucky and it all goes back together. And other times you don't.

I was just thinking about a Ford truck we had a while ago. We did some engine work and we put the one hose together and then that leaked and then fix that. And then another one leaked. And it was like, you know, it should have been done on Wednesday, took till Friday because it needed a bunch of extra hoses that just failed from whatever, you know, we breathed on the vehicle the wrong way. So that's what kind of happened. So just be prepared if you're watching this video, a lot of times these things happen it's unforeseen and it happens. A lot of European cars, especially have these clipped together hoses, but American vehicles use them too.

Bernie: It is. It's true. And you know, the other thing is we say, oh great, this thing's got low kilometres. Why would it wear out? Well, chances are, it's probably had a lot of short drives, you know, and those heat and cooling cycles make a big difference. I was talking to someone the other day, he was in a taxi and the odometer, it said it had 25,000 kilometres.

And I said, how do you have such little kilomeres? Well, it actually rolled over. It had 1 million, 1,125,000. It's a Toyota Sienna van. And you thinking, well, you know, an average Sienna will never last that long, but because it's a taxi, it's being driven all day long. So it's like the heat and cooling cycles don't happen so much that, you know, the engines on pretty much all the time.

So the vehicle really lasts a lot longer. We were really hard on our vehicles starting and stopping, but of course, we're not gonna just leave you sitting, running in our garage all day long, wasting fuel and polluting the air. It's better to shut it off, of course, but just par for the course.

Mark: So are coolant leaks like this a common issue for LR4s?

Bernie: Well, not just LR4s, but Land Rovers and Range Rovers in general. We do a lot of coolant leaks on these vehicles. Again, it's like these clipped together hoses fail. There are hoses that hide under superchargers on some models that fail. There are hoses that hide under intakes that fail. Again, they get a lot of heat. Sometimes a bit of oil will seep onto them, and they'll wear out. Or these plastic hoses get brittle and they break, or the thermostat housing. So coolant leaks are a pretty common repair for us on a lot of Land Rover products.

Mark: So this is, you mentioned, this is a three litre V6. Is it a transverse mounted or longitudinal?

Bernie: No, it's longitudinal mounted and it's a supercharged engine. It's basically like your five litre but it's like got two cylinders chopped off. It's interesting. When you look at it, it's just the superchargers just slightly quarter shorter than the or third or quarter shorter than the than the V6 or the V8 model. So yeah, I mean, I think it's a good idea in, you know, the V8, the supercharged V8, and they're kind of ridiculously high powered way over 500 horsepower. I think you can do with a nice V6 supercharged engine and still get lots of power for a vehicle like this.

Mark: How are they for reliability?

Mark: If you're looking for service for your Land Rover or Range Rover, the experts in Vancouver are Pawlik Automotive. You can book online at their website, pawlikautomotive.com. Or if you want to call and talk to somebody, (604) 327-7112 to book your appointment, you have to call and book the head, or you have to book online ahead. They're busy. Check out, of course, the website there's hundreds of videos and explanations on there. 10 years worth of these conversations, pawlikautomotive.com. Or the YouTube channel Pawlik Auto Repair, all makes and models and types of repairs. Thanks so much for watching and listening. We really appreciate it. And thank you, Bernie.

Bernie: Thanks for watching. And thanks, Mark. Always fun.