Mark: So today's victim is a 2015 Mercedes-Benz GLK350 that had an engine misfire issue. What was going on with this vehicle?

Bernie: Yeah, so the vehicle came to our shop with the engine was running a bit rough and the check engine light was on. So we proceeded to do some diagnosis and repairs.

Mark: And what kind of testing and diagnosis did you have to do to find the problem?

Bernie: Well, first thing is to scan the vehicle with a computer and see what trouble codes are stored in the vehicle system. And we found several codes. Engine misfire related. One random misfire code, one a cylinder five misfire, and then one, this is kind of a Mercedes type code, but it related to an actual circuit problem with the ignition coil.

We can be pretty certain from that, unless we find a loose wire you know, or something damaged that it's likely that the coil is faulty. So we went right to coil number five, did some more tests verified the coil in fact was actually bad and needed to be replaced.

Mark: So, what, then do you just change that coil or what's the process from there?

Bernie: Well, we actually changed all the coils and the spark plugs. The spark plugs were kind of due for replacement. They looked a little on the old side. So figured, you know, they had never been done before. Kind of made sense to do it while we're at it. So while you're taking all the spark plugs out may as well change the coils at the same time. There's some added costs, but then you're changing all the parts and pieces.

You know, each coil has got the same age. So it's really a gamble at this point as to how long the other five coils, this is a V6, how long they're going to last. Will another one fail next week or will it fail in five years. You don't really know. But one thing's for certain, if we do them all now, they should all last amount of time in the future and doing the spark plugs, it's kind of a complete ignition system rebuild. So to speak.

Mark: What kind of mileage does this vehicle have?

Mark: Was there any other service that you did at that time?

Bernie: We did a GDI fuel system cleaning as well. And I'll explain that in a sec. I'll just kind of go over some pictures first. So there's our car, little compact sport utility vehicle. 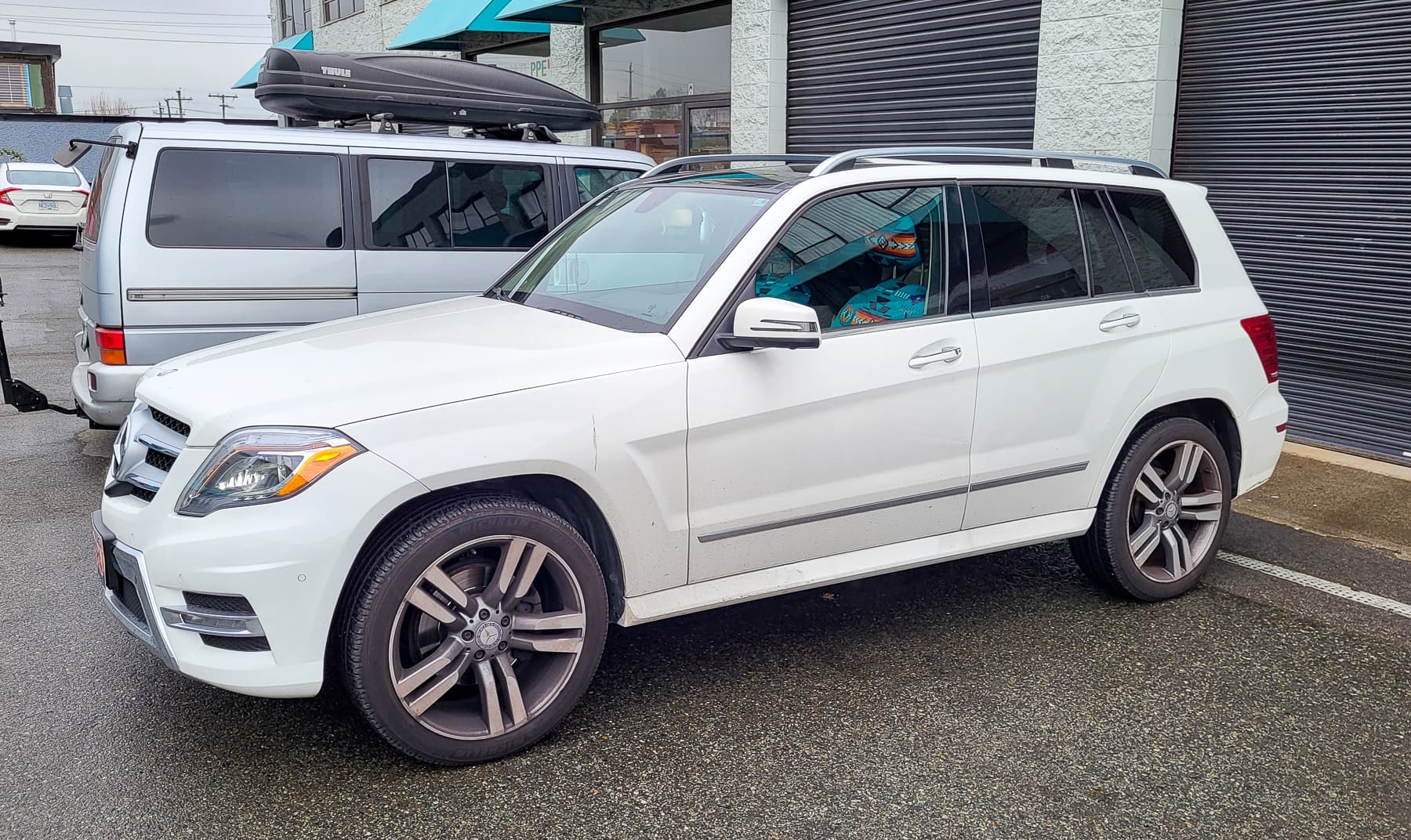 There's our view of the V6 engine. The spark plugs are buried way in under these covers, the spark plugs and coils. So there's a lot to remove to get at them. It's not a simple job. And again, why I'd mentioned we'd changed all of them while we're in there and while we're at it, there's not a lot of extra labor to change them all. But there certainly is to go back in there again a second time. So a lot of times it makes sense to do this kind of. 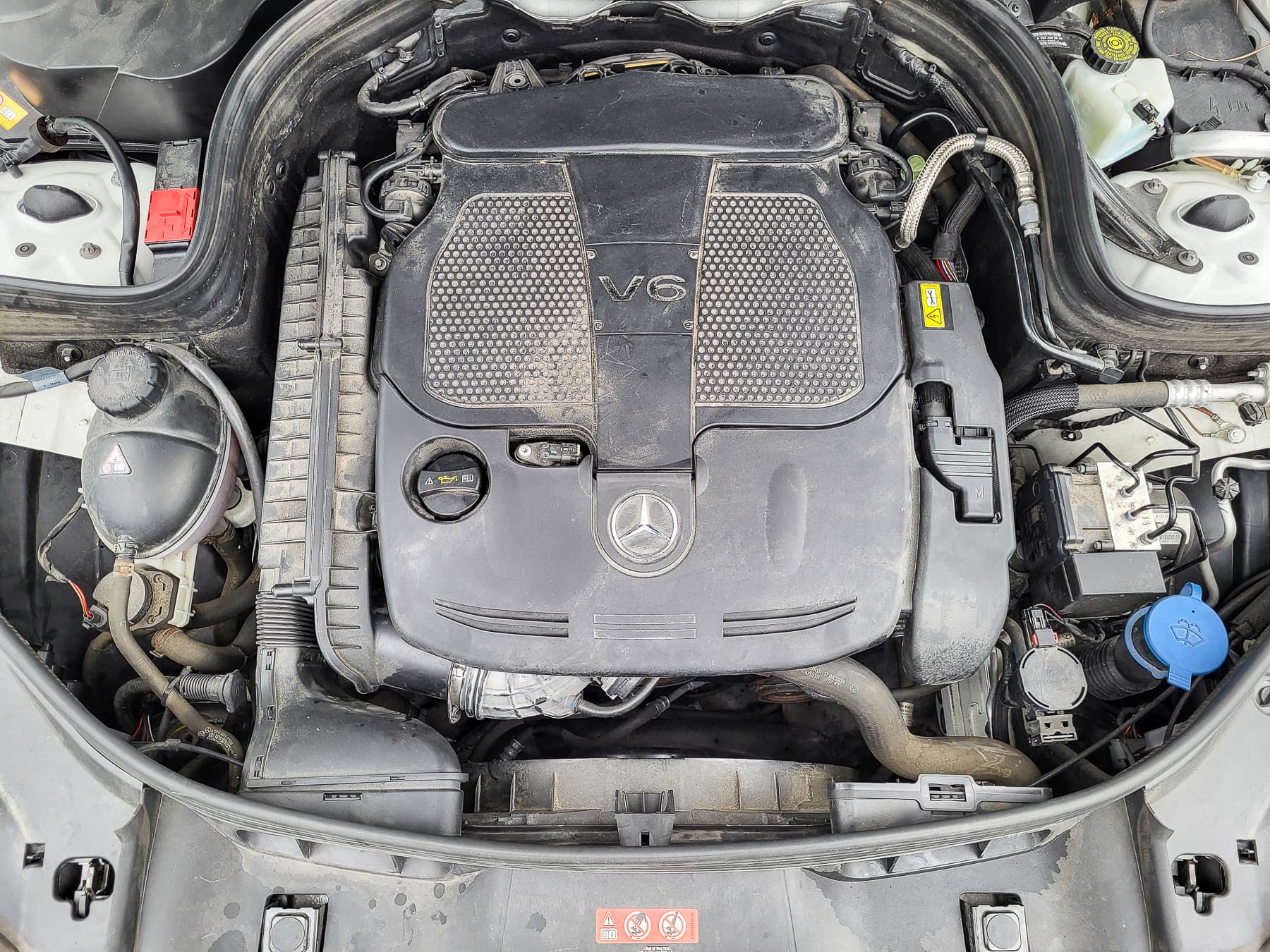 So this is a view of the left side of the engine. Again, the spark plugs and coils are hidden where I'm kind of moving my mouse here under these covers. There's a computer here. The powertrain control module is located on the side of the engine. So again, that's something that needs to be removed. And then if we look on the other side of the engine, the air filter box is all in the way. I mean, it all makes sense to set it up like that, but it makes for spark plug and coil replacements time-consuming. 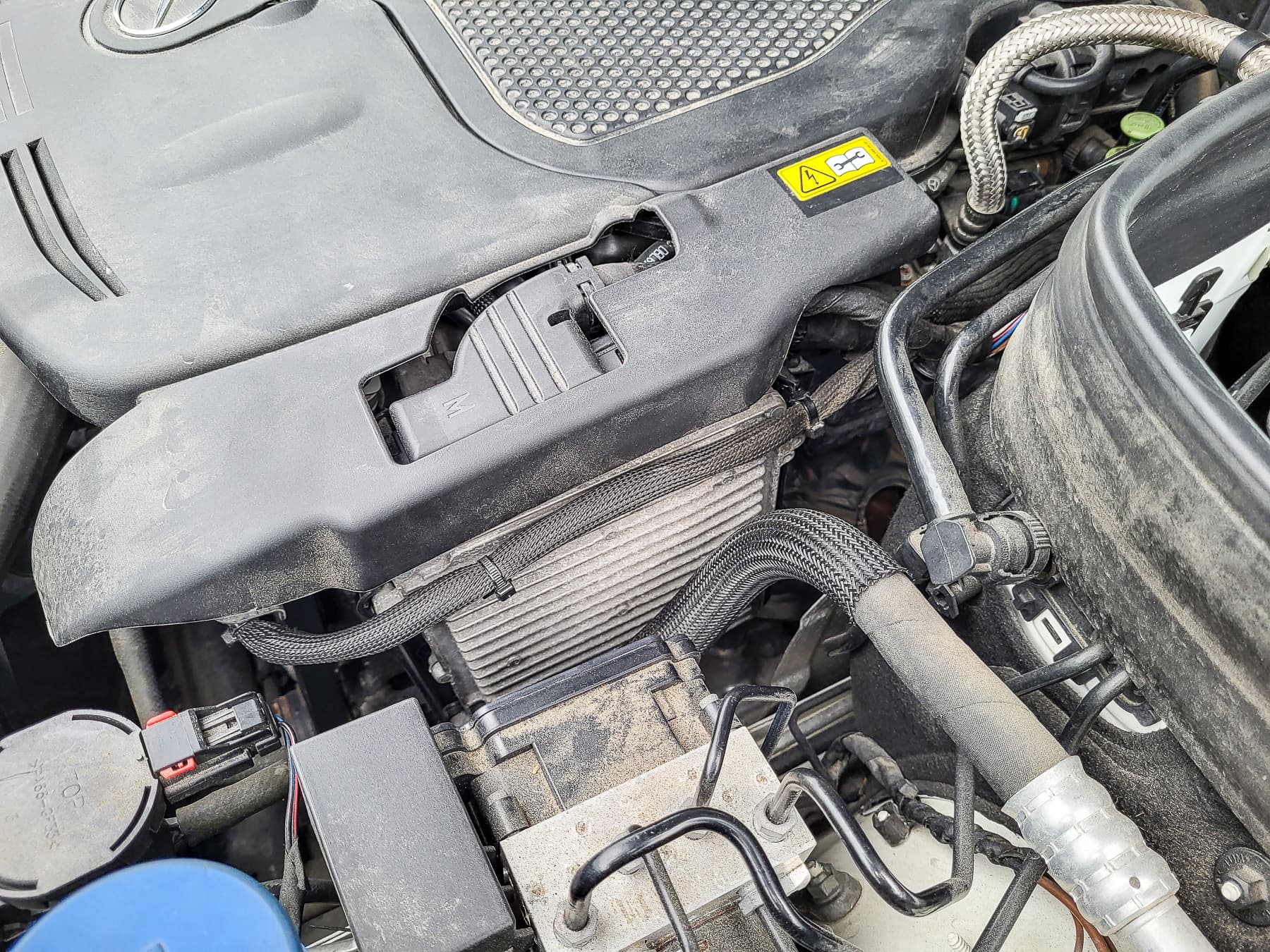 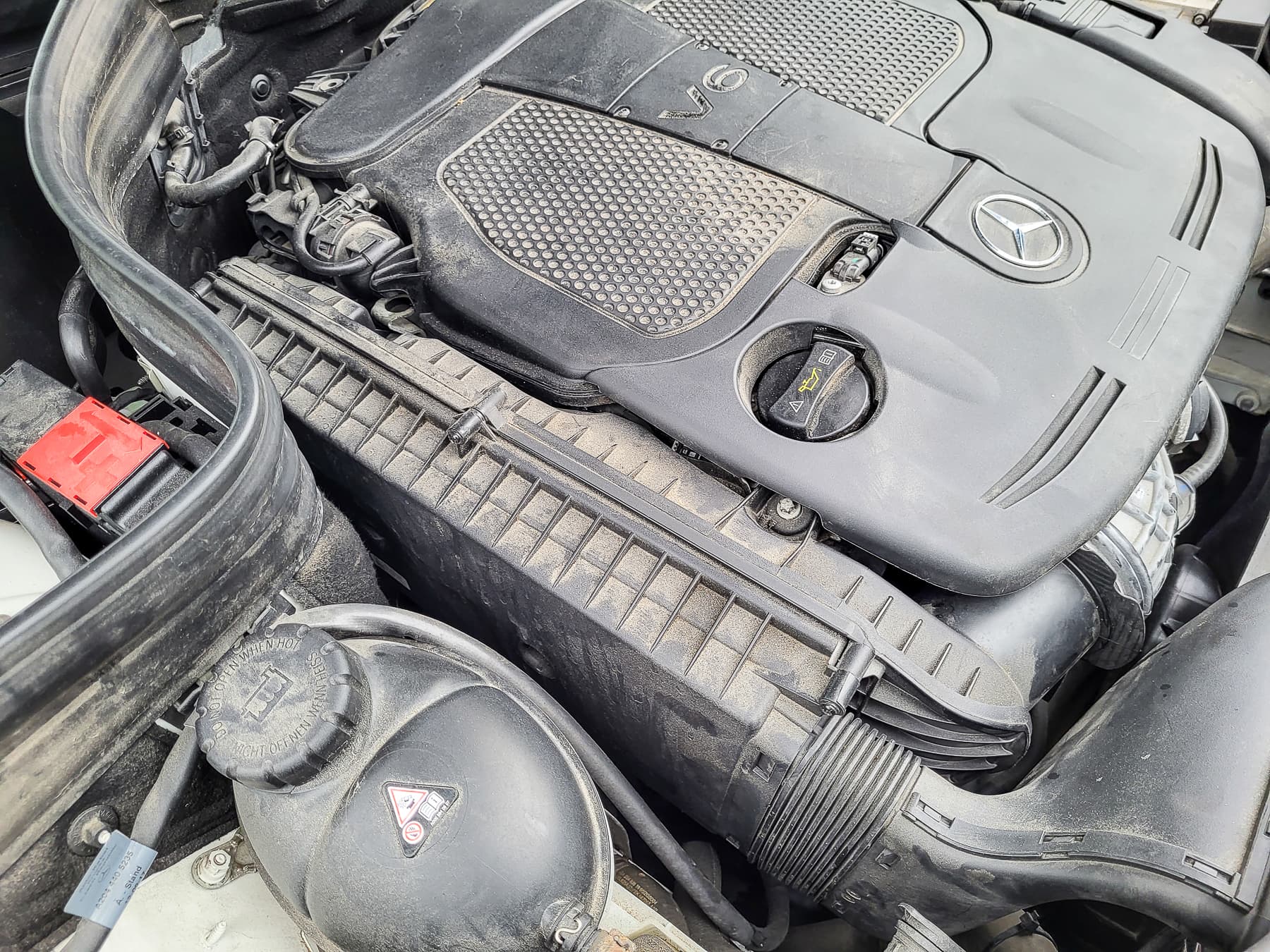 Here's a view of our spark plugs. Not much to say about them other than, you know, sort of typical wear of the age of the spark plug. 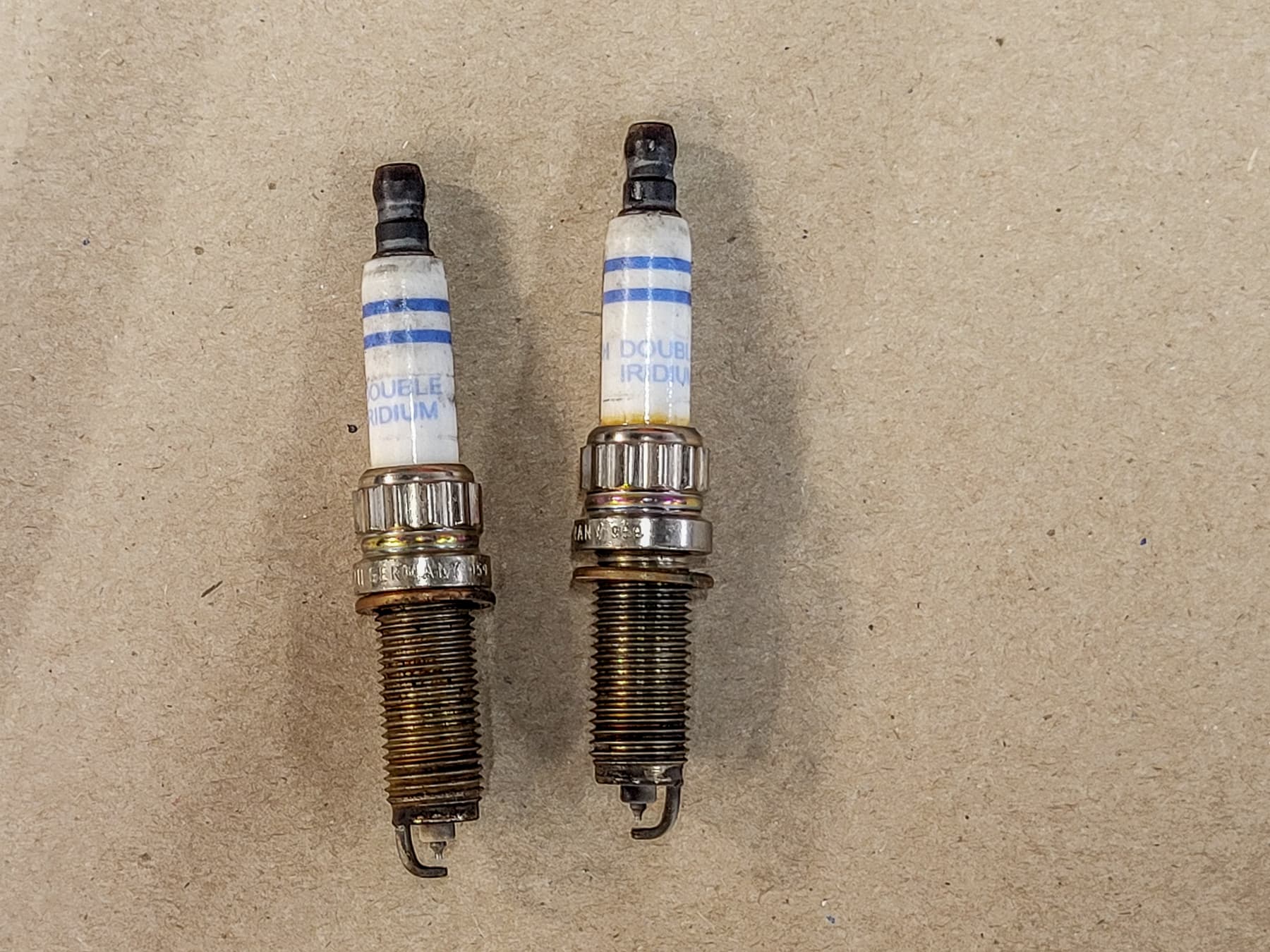 And we have one other picture to show, that's the ignition coil. Very unique coil boot on this thing. So it basically mounts around a kind of a tight corner. So they've engineered it so that it kind of snaps in place around the corner instead of a straight coil boot. This is the electrical connector where the low voltage signals, commands and power and ground are situated. We're looking at it sort of side view. That's the actual magnetic section of the ignition coil. So that's our picture show. 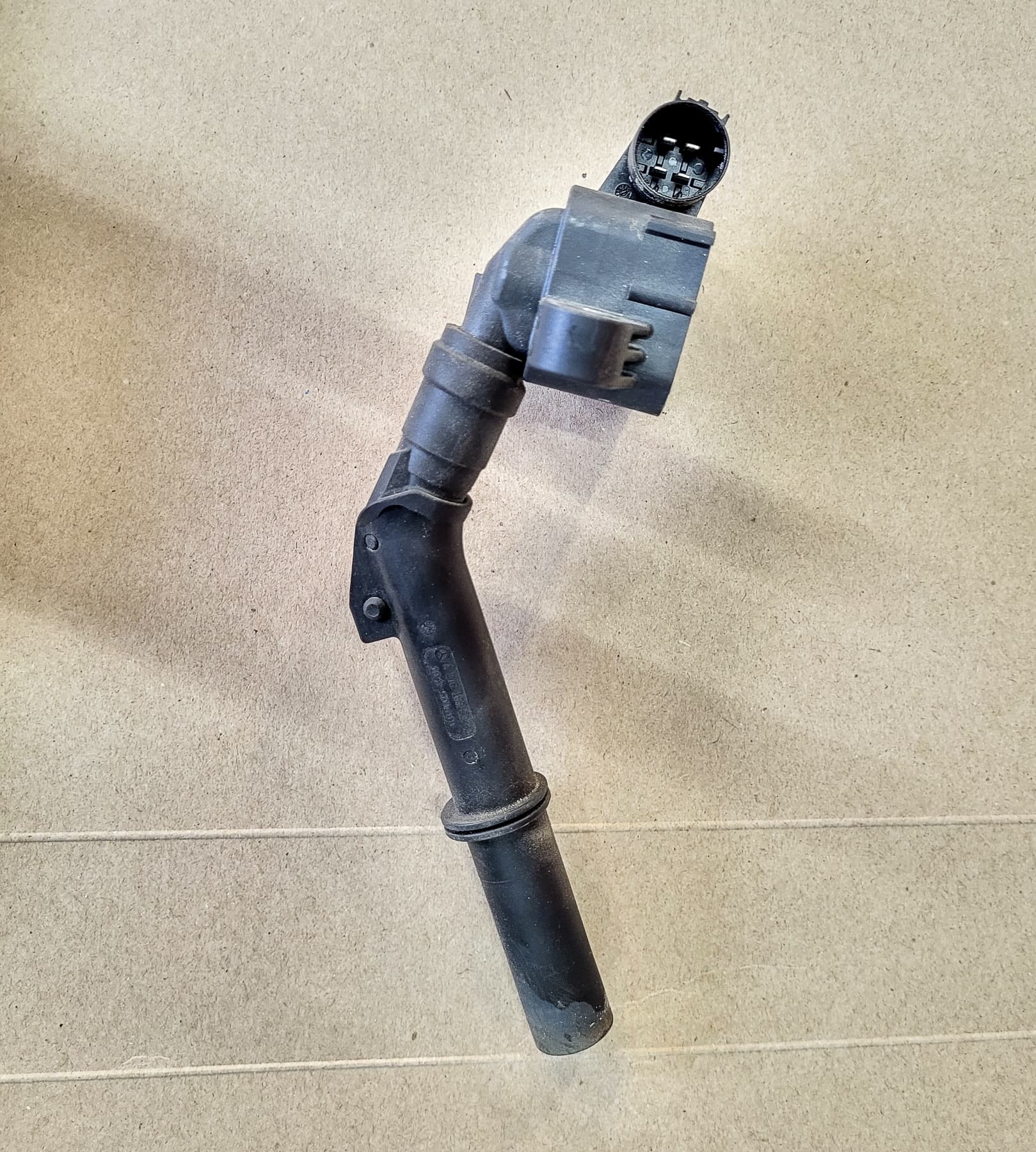 Mark: So why would you do that? What's the value of doing that kind of cleaning?

Bernie: Yeah, so the reason we do that is, it's a maintenance service that you should do probably every 20 to 30,000 probably every 30,000 kilometres on a GDI system vehicle. A reason to do that is that carbon deposits build up on the intake valves. On a traditional injection system, aport injection system, which are still used today, but not quite so common, the fuel injectors spray fuel on the back of the intake valves. And so that tends to wash the carbon deposits off. Not that that isn't an issue. You know, that hasn't been an issue in the past of carbon deposits on the valves, but it's less prominent and there's no way to clean it off other than doing this GDI system cleaning. So if you get a lot of carbon deposits on the valves, it causes engine misfiring, poor performance, hard start-ups, all sorts of little issues.

So it's a good idea to keep it clean now and do it on a regular basis with a chemical cleaning service, as opposed to waiting till later when they actually get really carboned up and you have to dismantle the engine or use the walnut shell blasting to get the carbon off. Then it becomes a really big deal.

Mark: So, okay. So that's the reason for GDI, you know, here's the question for you? What is the coil do?

Bernie: Oh, it basically fires the spark. So the way an internal combustion engine works is it has a spark plug. And that spark when the piston moves to the right spot and the valves are all closed and the air and fuel are all compressed, the spark plug fires, explodes inside the cylinder, everything expands, forces the piston down, and that's what makes your car move, essentially.

So the ignition coil is that part that actually generates that high voltage spark. In the olden days, it used to be one coil would power the whole engine. So you'd have like, say a V8, well, this is a V6, so you'd have one coil and it would basically generate six sparks every two times a crankshaft revolves.

And so the energy of that coil is spread out over quite a few spark events. Whereas if you have one coil per cylinder, like these engines do, and most engines do nowadays, that coil can be controlled by a computer. The timing can be absolutely precise. And the spark energy, it's only sparking once every two crankshaft revolutions. So much less work.

So the coil can be actually smaller, more compact and fire with a lot more energy than you could with a coil it's sparking six times. Plus it's very direct on this kind of engine. As opposed to like I say, the olden days where you'd have a coil and then there'd be a wire from there to the distributor, and then we'd go through the distributor cap and a bunch of wires. And so a lot of it is about fuel control, but that's a long-winded answer to your question. It's a spark generator.

Bernie: Exactly. And it's been around for a long time, just a little bit of trivia, the word tune-up, which we don't really use anymore, but it was a common thing when you and I were younger and it actually comes from the days of, it was a Ford engine, model A or model T Ford where they had four ignition coils. It was a four cylinder engine and the coils would actually be firing all the time and they make a buzzing sound. And the engine would be said to be in tune when they all buzzed the same amount. So I've never worked on one way before my time. But anyhow, that's where the word tune-up came from. I was kind of amazed when I learned that quite a few years ago. That's kind of cool. That makes sense.

So, you know, in all the years we used to do tune-ups when when we were younger, we weren't really even doing tune-ups in the sense of how the word was first coined, the phrase was first coined for a car. But you know, to me, I mean, a tune up is still taking something and making it better, kind of like tuning a piano. You take it and make it sound perfect. And so same with an engine. I guess the GDI system service is actually about the only thing that's like a tune-up nowadays. That are the motor back fuel injection cleaning that we do.

Mark: Back to our GLK350. How are these Mercedes-Benz for reliability?

Bernie: Yeah, they're pretty decent. You know, this coil issue is something we tend to run into from time to time. Overall pretty decent car. Being a Mercedes there'll certainly be other issues, you know, they're European fancy car. They tend to have a few more issues than than some other cars. So I won't mention any of the brands, but a good car overall. Nice size compact vehicle.

Mark: If you're looking for service for your Merc in Vancouver, BC, Canada. Mercedes-Benz. The specialists in this are Pawlik Automotive. You can reach them on their website to book at pawlikautomotive.com. They'll call you back. They'll check out what's going on. Get ready for your appointment. Or you can call them at (604) 327-7112. They're busy. You have to call and book ahead because they're busy all the time. I know this week they've been fully booked, so they're taking maybe next week starting to get all full already. So you have to book ahead, is the message here. Pawlik Automotive. Check out our YouTube channel. Pawlik Auto Repair. We have almost a thousand videos on all makes and models and types of repairs. As well as on pawlikautomotive.com those nights, when you're not sleepy, feel free to browse. We'll put you to sleep fast. I guarantee it. Thanks so much for watching and listening. Thanks Bernie.