Mark: Hi, it's Mark from Top Local. We're here with Bernie Pawlik, Pawlik Automotive in Vancouver. Vancouver's best auto service experience. 22 time winners of Best Auto Repair in Vancouver as voted by their customers. And we're talking cars. How are you doing Bernie?

Mark: So 2015 mini Cooper S is this week's victim, what was going on with this vehicle?

Bernie: So these people had noticed some issues in their vehicles, some clunking and vibrations in the vehicle. Been to the dealer for service. And, they'd been told that the right engine mount needed to be replaced.

They'd, you know, wanted a second quote. They liked our price and they were actually a regular client of ours with another vehicle anyways. But, came in so we could replace the right engine mount.

Mark: So what kind of testing or diagnosis did you do to check whether that was accurate?

Bernie: In this case we didn't. Generally speaking, I find, you know, dealers are, they tend to know their cars. So, you know, we can assume that what they quoted was accurate. And we did find in fact, and you'll see in some pictures, you know, that that was a very accurate diagnosis. So in this case, we just took their word for it, you know, let's say the client like the price. So we, proceed with the job.

Mark: So what's involved in replacing this engine mount?

Bernie:  Well, this one's actually a pretty time consuming job and the mount itself is not cheap, but the labor is also pretty intensive too.

So, let's just get into some pictures and it kind of paints a better picture here. 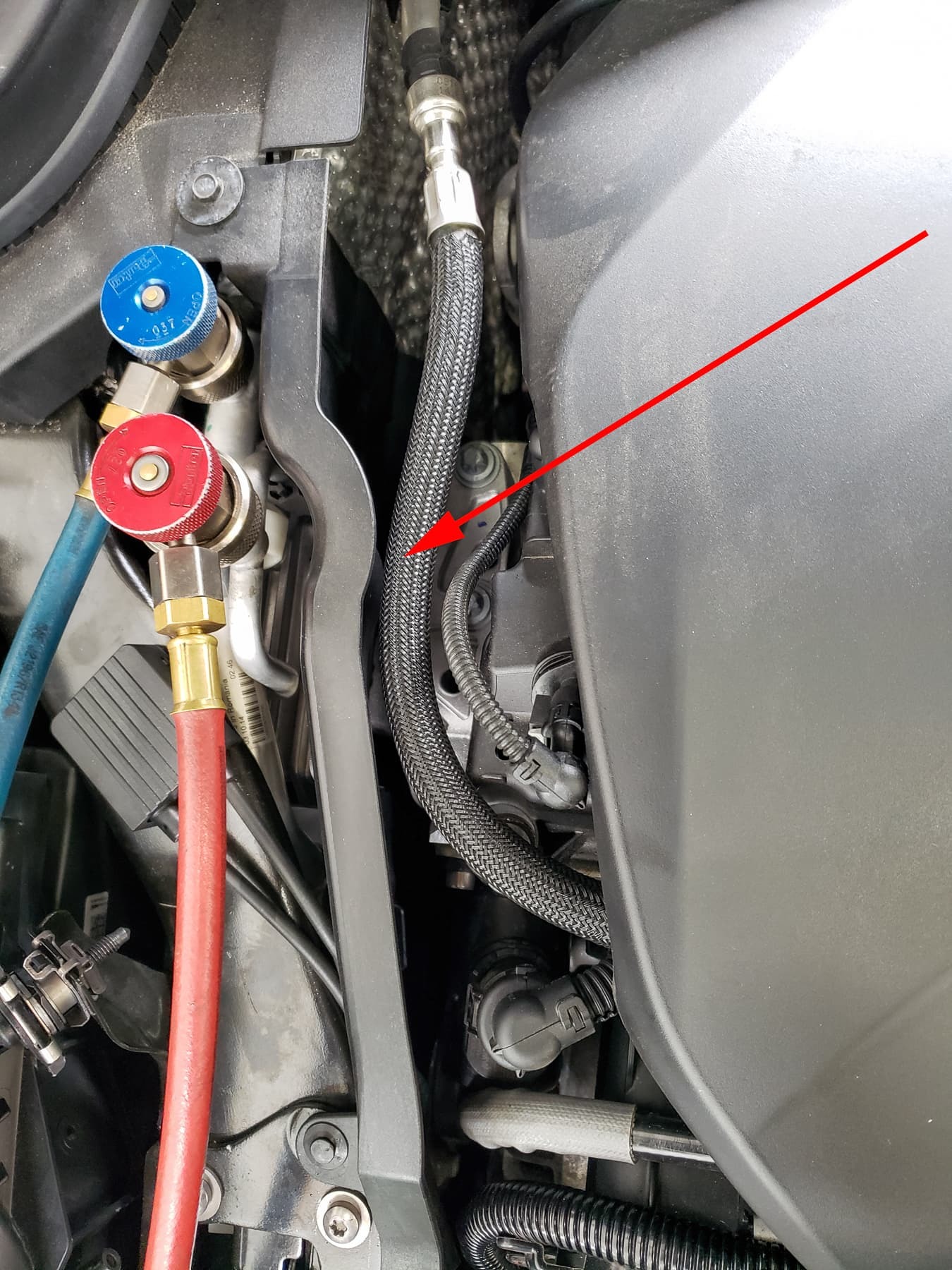 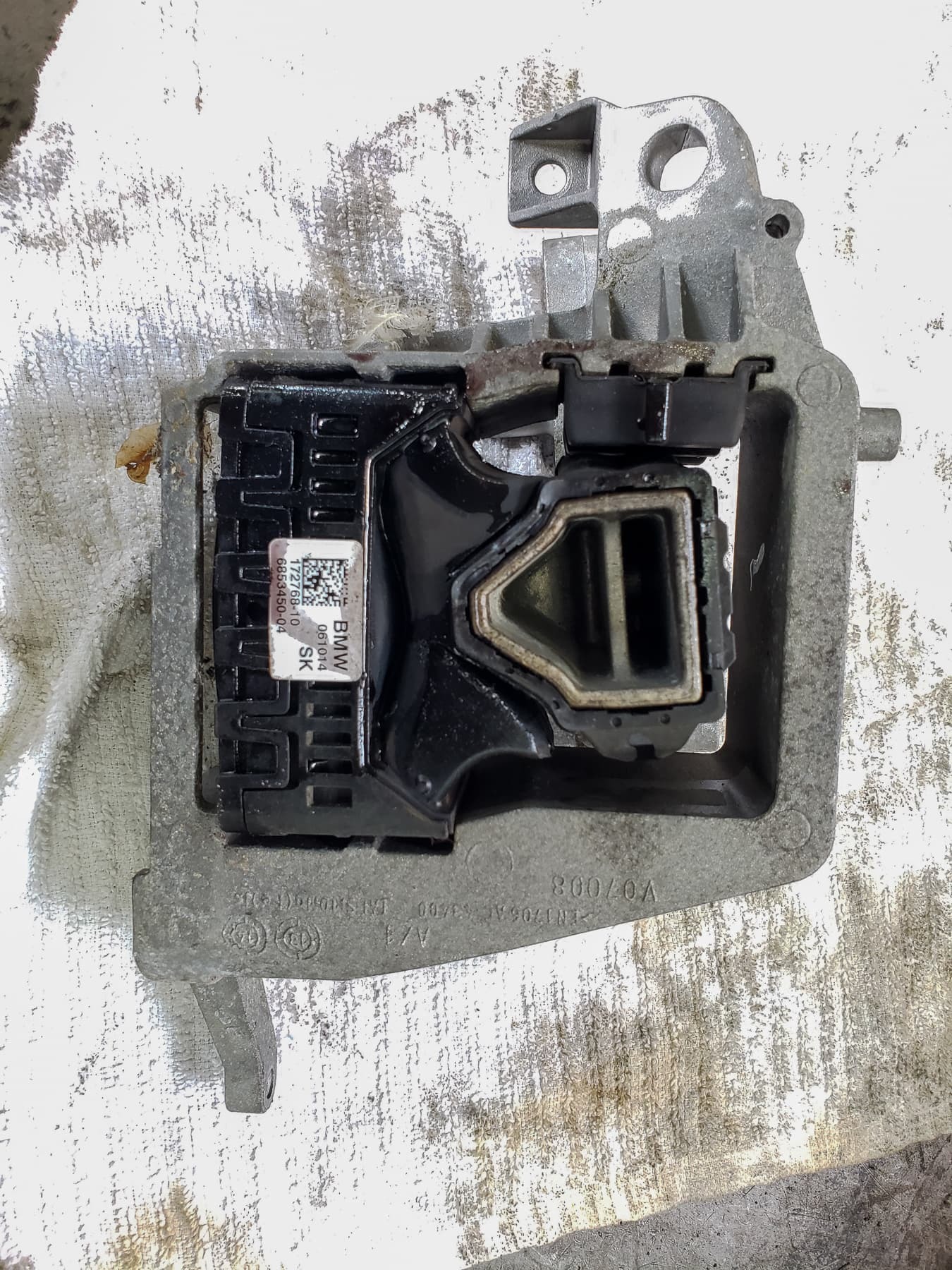 So there's our 2015 mini Cooper S cool looking vehicle for sure. This is a top view of the engine. This is the famous plastic cover that you find on most engines. Twin power turbo. It's pretty cool. Nice peppy little car.

And, there's a slightly closer view here. The arrow just points to where the engine mount is, but you can't actually even in fact see it with all these pieces in place. These are red and blue hoses, by the way are air conditioning charge hoses. So I took this photo after we'd actually installed the new mount and, we're recharging the air conditioning system. These pipes actually have to come off and come apart to access the mount. So there's a lot involved in the process. There's the engine mount.

So basically, even though it's a Mini, it's a BMW vehicle. This is the mount. So basically engine mounts are made of a few different things. On the simplest terms, an engine mount is usually a piece of metal with a rubber, it's kind of like an ice cream sandwich with a rubber where the ice cream would be and metal where the cookies would be.

But, engine mounts have got a little more sophisticated, but this is kind of the same idea. The engine bolts up, you can't see it, it's on the other side of this metal piece here, the engine bolts up to that part and this bolts to the frame of the vehicle the aluminum piece here. So, this is actually taken on an oily white rag so it's a little difficult to kind of make out. But this sort of twisted and kinking, and you can see it's a bit oily, this is all deteriorated parts of the mount. It's actually torn right here. So the mount's broken, the engine, you know, jumps around, it vibrates. So there's clunks present, vibration, which this mount is supposed to dampen out occurs.

Some of the components in this mount, I mean, as I said, the simplest engine mounts are just a piece of rubber sandwiched between two bits of metal, but they've got much more sophisticated over the years.

A lot of them are oil filled they use like a hydraulic cushioning inside the oil to dampen the vibrations out even more. And these you'll often know these are worn out if there's oil or fluid leaking out of them. And, I mean, that's not a new technology for many. It's been around since the nineties, the oil field mounts, probably, maybe even the eighties, and on a variety of vehicles, not just sophisticated European cars.

Also I've even seen some engine mounts actually have electronic dampening inside the engine mount. And again, not necessarily exclusive to a fancy European car. Sometimes it can be simpler vehicles. A Nissan Quest van that has a dampened engine mount.

Anyways, I believe that's our picture show for today.

Mark: So is this a common failure part on these minis? This is only a 2015, so it's only five years old.

Bernie: Yeah. It is a common failure item on this car. So if you own one of these vehicles, you can pretty well count on this engine mount failing. I realized when I was thinking about preparing this podcast, it seems like a lot of the things we talk about on these podcasts are our common failure items.

And that's one thing that's good about when you buy a used car, is there's a certain level of predictability to what are the failure items. I get people who call me up and they were about to buy a brand new model of a certain vehicle and they're like "Well, how reliable is it?"  I go, I don't know. It's brand new.

But when you have a vehicle it's been around for awhile, you kind of get a track record of things that are common failures. And then, you know, to look for them if you're buying a used car, but if you do own one of these vehicles, chances are you'll be changing this mount because it is a failure item.

Mark: So how would someone know that their engine mount is failing?

Bernie: Yeah, well there's a few things you'll notice when you either accelerate or decelerate, you'll sometimes feel a clunk or a thunking kind of sound in vehicle under certain conditions. That's a pretty good indication you have a bad engine mount. The other thing is vibration. In an engine there's a certain feeling, you know, when you're idling say a light in park, you know, there's a smoothness, but if you can sort of feel a shake of the engine in the vehicle that could also be a sign of a bad or worn engine mount also. They don't have to all get as bad as this one to be troublesome.

One question we didn't put in there is do you change all of the engine mounts? And there are some vehicles where if a mount is worn, a lot of times we will change all of them because it's just kind of the nature of the vehicle. But in the case of this Mini, this is a very common failure part. So we just changed this one.

Mark: And how many mounts are there, is it four?

Bernie: Generally four on most vehicles. Depends, you know, on a traditional, front engine rear wheel drive kind of vehicle is usually three, two on the engine, one on the transmission, a transverse mounted engines like these, usually about four. Sometimes they have five, they'll have like a torque damper as well at present, you know, as the engine twists back and forth, there's some dampeners. Some of those are kind of sophisticated shock absorber type things, others look like a dog bone with rubber on each end.

Mark: And how are these Minis for reliability?

Bernie: Well, generally speaking, they're pretty good. But again, you know, as we've said, five-year-old car with a worn out engine mount and you'll find there are many cars that are 20 years old where the engine mounts aren't even worn. So I mean, every car has their issues.

There's some cooling system leaks that occur on these, but generally they're pretty good vehicles you'll know it's a BMW product. You'll tend to find that some items were out a little sooner than you'd think. And they are a little more expensive to fix. These parts are exclusively dealer, we just buy it directly from the Mini dealer. So there's not a lot of better pricing options for some parts on these things.

Mark: Well, if you need some service for your Mini in Vancouver or if you've got some clunks and thunks that are happening from the engine area, the guys to see are Pawlik Automotive. You can reach them at (604) 327-7112. To book your appointment, you have to call and book ahead. They're busy. They're always busy. They're always booked. So you got to call and book in Vancouver, BC, Canada. Or check out the website pawlikautomotive.com. Hundreds of videos, I'm not exaggerating, hundreds of videos on there on all makes and models of cars, all kinds of repairs for the last seven years. Or the YouTube channel Pawlik Auto Repair. Thanks so much for listening to the podcast. We really appreciate it. Leave us a review on wherever you're picking up your podcasts and as always, Mr. Pawlik, thank you very much.

Bernie: Thank you, Mark. And thank you for watching. It's greatly appreciated.