Mark: Today's victim's a 2015 Range Rover Sport. Had a front door latch problem. What was going on with this vehicle?

Bernie: So, yes we've cut to the actual repair. Replacing the front door latch. So how did we get to that? Let's unravel the puzzle, the mystery. So what happened is this vehicle came to us where the owner couldn't lock the vehicle because of an issue with the door locks.

We didn't know it was the right front door latch. That's kind of the puzzle of mystery and the the alarm would continue to go off on the vehicle. So it's a very irritating issue. So couldn't lock it. Alarm goes off. That was why it came to us.

Mark: Okay. That sounds incredibly , like you said, annoying. How do you diagnose that issue?

So what we found is there's a code for a door issue sorry, I can't remember the exact code or what the description was, but basically it did not tell us that it's the right front door or which door, it just said there's a door issue. So okay, we know the problem is in a door. Now the next question is how do we find the door? And that was kind of the, the next part of the puzzle.

Mark: So that's kind of frustrating in a way. The scan tool doesn't tell you exactly what to fix in other words.

Bernie: No, it doesn't. And so many people have that belief that, oh, you just plug into the car because they're sold that kind of BS somewhere. You just plug into the car and they'll tell you what to do. Well, no, it doesn't. Most of the time, 99% of the time, it just tells you what direction the problem is. So we know the problem's in a door somewhere and it's a matter from there to test further.

Now, full disclosure, we don't have, I mean, we have access to an OEM Land Rover scan tool, but the scan tool we have is an aftermarket unit, which is 95% as good as the OEM. I don't know if the OEM will actually tell you which door it is, but on our scan tool, we have actually several, none of them said which door it was. So we had to do a little more scanning with a different scan tool, more testing and I won't get into the depth of it, but we figured it was the right front door that was the problem.

So inside the door, we'll get into some pictures in a second, but the door latch mechanism is very complex. There are switches. There's the actuator for the power door lock, the actual latching mechanism that holds the door closed and allows you to open the door. And then there's switches that are sent to the vehicle computer saying, Hey, this door is closed. You can turn the alarm on. You can lock the car. Everything's good to go.

So let's let's have a look at some pictures. There's our Range Rover Sport. Always a good looking vehicle. 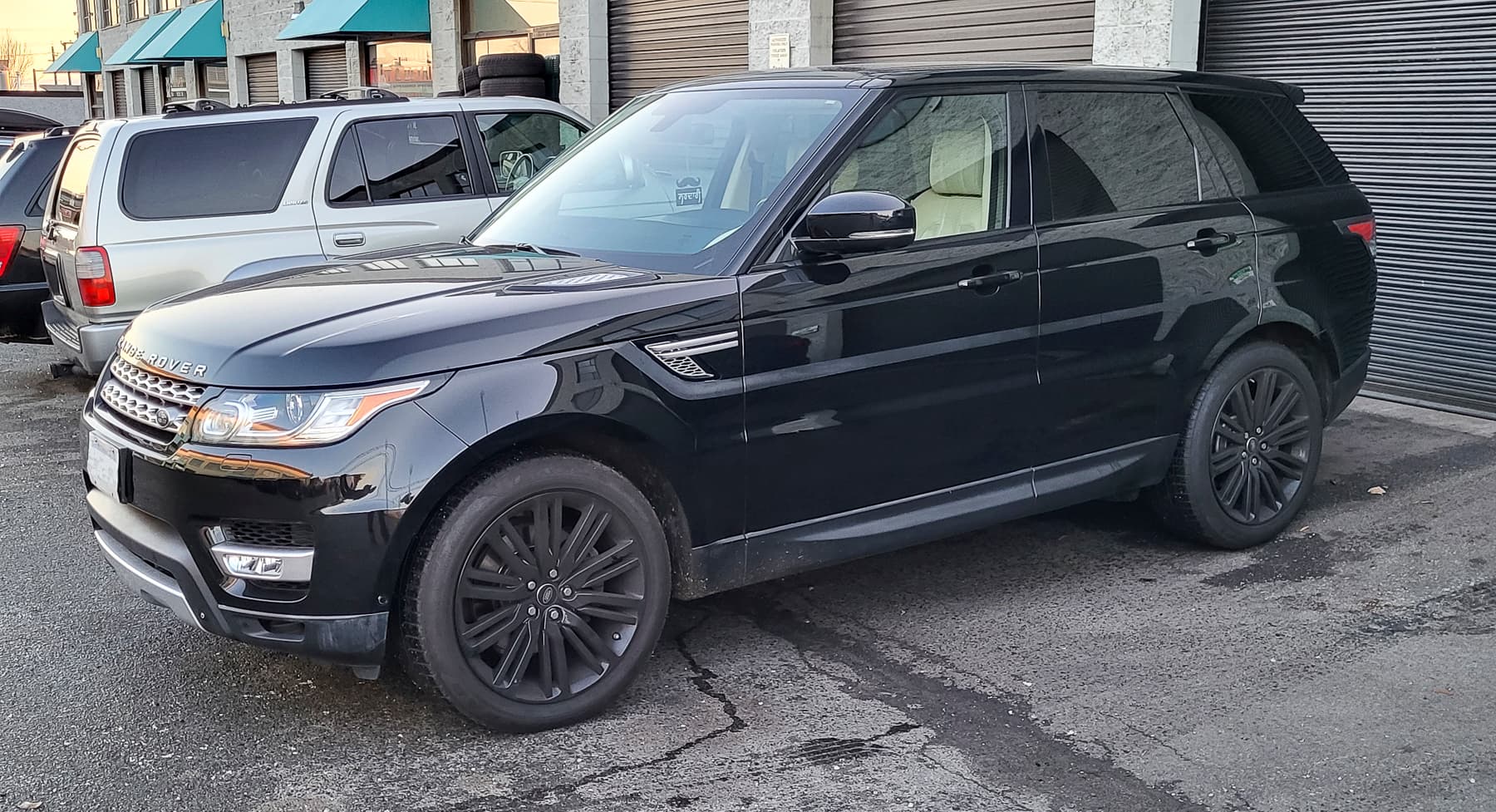 And there's the door latch. So this is the old one that we removed from the vehicle, which still looks practically as good as brand new. Moving my mouse pointer around. You can see this area here where I'm moving it, this is where the actual door striker attaches. So the latch, this mechanism is right in there. This grey part, it's kind of a felt sealer pad. So just kind of seals the weather out from the inside of the door. Probably provides some noise cushioning too. There's lots of things they do on these vehicles that make them the luxury vehicle that they are, you know, for quietness of ride and so forth. You can see some electrical items in this area here. 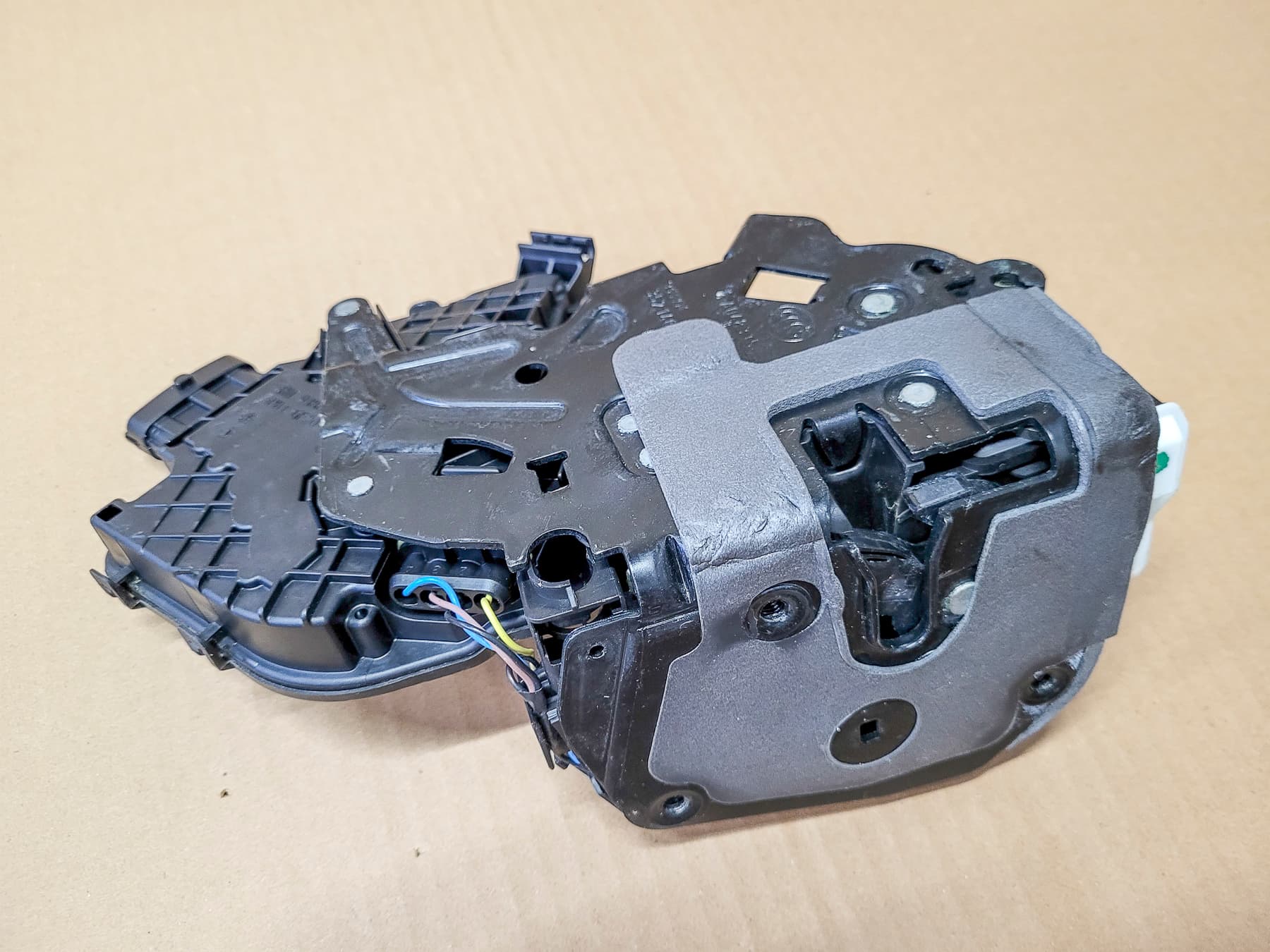 And in this view here, this is the other side of the door latch. So we were looking at this part here. Here's some of the mechanics of the door latch where this will attach to the inside and outside door handles here. These are moving parts here. You see little gear here. There's a micro switch here. I'm not sure, this may be what sends a signal to the computer that the door is open or closed. There's also several electrical connectors. There's one here, there's another one here. 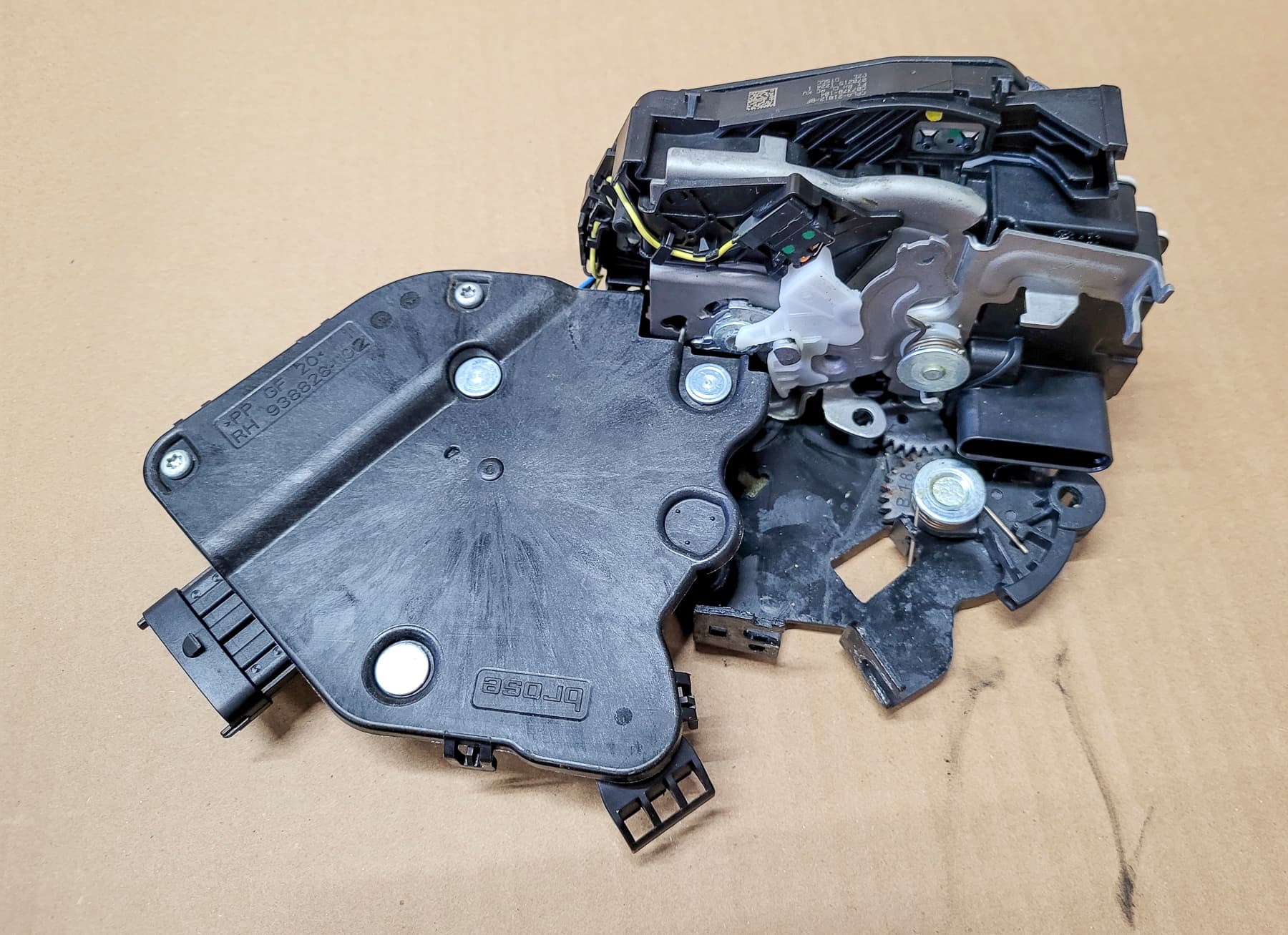 So there's probably, I'd say a total of 10 to 12 wires, you know, going to these various modules and these pieces. So there's a lot going on. That's basically it. And you know, whatever it was, as we determined, the problems inside the latch, nothing is serviceable. You have to replace the whole unit. So there you go.

Mark: So once you've replaced it, like how big a job is this to replace that front door latch?

Bernie: Not incredibly difficult. I mean, you have to pull the door panel off and, you know, move the glass outta the way and things to get at. It wasn't the worst job, but, you know, being a Range Rover, things are built with high quality. So when they put those things together, you have to be careful how you take the door panels off. They're little different than your old 1972 Ford Pinto door panels. Let's put it in comparison.

Mark: So since this is talking to the computers and there's multiple in the vehicle, is there any reprogramming required once you put the new door latch in?

Bernie: No, this one's plug and play. So again, that makes it easy. But you know it, a lot of times there's an issue with reprogramming certain modules or switches, and I'm thinking, some cars you need to, some cars you don't. Fortunately with this one, it's just plug and play. As it should be. I mean, there's no reason to program anything. The computer should see it. Oh, it's all good, and the way it goes.

Mark: Well, I'm just thinking in the future, this is one of those things that will go wrong with electric vehicles as well.

But I mean, there are some fluids. There is a cooling system and so there are things that will need to be serviced and flushed, but not like an internal combustion engine. The heat issues and all those gaskets and zillions of moving parts, literally zillions compared to an EV are just not there.

Mark: So how are these 2015 Range Rover Sports for reliability?

Bernie: Yeah, they're pretty good. I mean, Range Rovers are more complicated vehicles, so things do tend to go wrong. I mean, this has the five litre engine, has the timing chain issues. We haven't done a timing chain in Range Rover in a while. So I don't know if either they're sorting them out or they're all getting fixed under warranty.

And the non supercharged ones tend to last a lot longer than the supercharged timing chains on the five litre. This sort of happened since, I think 2011. Is it 2010? 2011? But yeah, other than that, a pretty good, decent, reliable vehicle. But you know, they're complicated. So you will spend more money on repairs.

Mark: There you go. If you have a Range Rover and you want some reliable support for your vehicle to make sure it's running properly, any kind of issues that you might have, the guys to see are Pawlik Automotive in Vancouver, BC Canada. You can book online at the website pawlikautomotive.com. Or give them a call to book (604) 327-7112. You have to call and book ahead. They're always busy. Thanks, Bernie. Thanks for watching and listening.

Bernie: Thanks Mark. Yeah, thank you for watching. We always appreciate doing these.