Mark: Hi, it's Mark from Top Local. I'm here with my good friend, Bernie Pawlik of Pawlik Automotive in Vancouver. Owner of the best auto service experience in Vancouver and 23 time winners of Best Auto Repair place in Vancouver as voted by their customers. And we're talking SUV's today. How are you doing Bernie?

Bernie: Good. I love that introduction. My good friend. You're my good friend too. Yeah, I'm doing really well.

Mark: So today's victim 2015 Range Rover Sport SVR. There's a maintenance service. What was going on with this vehicle?

Bernie: Yeah, the vehicle came to our shop for a routine maintenance service.  It was an, A service with a tire rotation and basically took care of that. I think a cabin air filter as well. That was all that was due on the vehicle at this point in time.

Mark: How many kilometres was on the vehicle?

Mark: So how often do these vehicles need service?

Bernie: Well, it depends on your driving routine. So I had to look at the maintenance schedules and there there's basically two of them there's normal use and then there's, what do they call it? I can't remember the word they use, but I'll just call it severe use which is probably not the right word, but the definition of severe use is short stop and go trips, which pretty much everyone does. Towing. Frequent cold weather starts and off-road use. There's a lot of Range rovers that are very capable of off-road that never see the off-road, but it's that frequent stop and go that puts almost every one of us into that severe driving category, whether you believe it or not.

So the regular schedule for the severe use is about every 13,000 kilometres, but it's 26,000 for the normal usage which is really, really an awful long time to go between services, in my opinion. So I mean, I think 13 Ks is pretty much stretching it out as far as you'd want to go and then on any sort of usage.

But if you do just nothing but highway driving, you can probably get away with a little longer timeframe.

Mark: So this is an SVR model. What makes it different from the supercharge model? 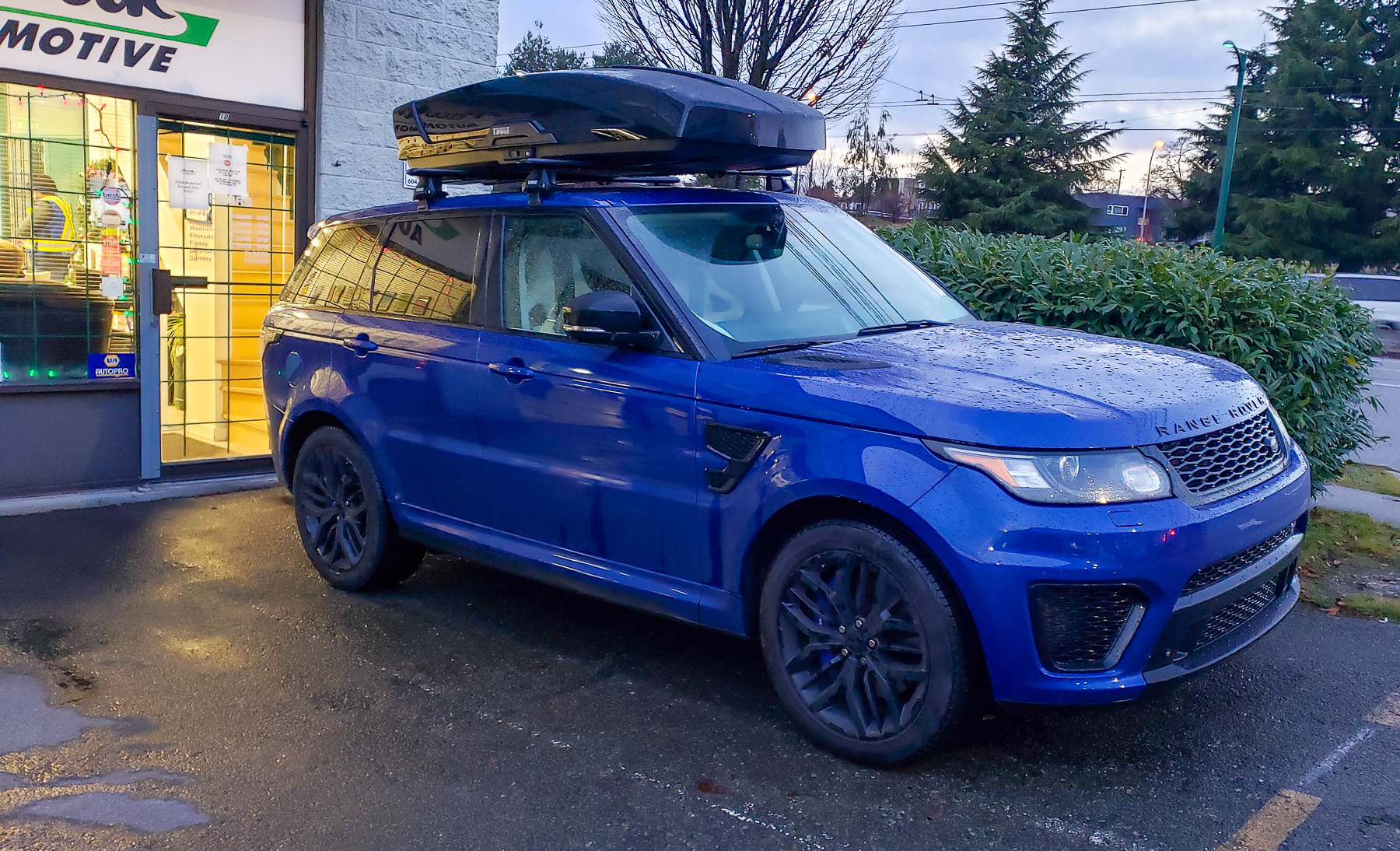 The vehicle itself looks pretty much the same. I mean, there's some SVR badging in a couple of spots, but I think the front air dams, I believe are a little different. But mostly the vehicle looks the same. You have to kind of look closely to see this on SVR model.

The braking system is bigger. It's got some engine modifications, the interior is different and the suspension has some upgrades as well. So just all those items that are already really pretty high performance in a supercharge model are just beefed up that much more in this model.

Mark: So this is a normally aspirated model, I'm assuming. How do they get that extra horsepower out of, how do they get the extra ponies out of this engine compared to the supercharged?

And then you've got this model, the SVR, which is a supercharged on steroids. You know, I don't know all the exact details, but I'm suspecting because the engine looks, you know, it's the same size engine. That's not any larger displacement. I think most of the modifications are in tuning, software, those kinds of details.

There's a lot you can do to adjust transmission shift points, that doesn't add horsepower, but how the power is delivered to the wheels. But just how the supercharger set up, valve timing, various items, you know, that can make the modifications. I don't know if there's actually any internal engine differences on these things, but you know, through some programming and maybe just a slightly boosted supercharger, you can add an awful lot of extra horsepower.

Mark: And maybe affect lifespan of the vehicle as well?

Bernie: Well with any performance modifications, you're bound to strain the vehicle a little bit, but if it's a well-built engine it can probably handle it. Unless of course, every time you're going to be flooring it you know, that's going to be a little harder. But just for everyday usage, it's not going to strain the engine a whole lot more. But there are certainly items, as we found with the timing chain replacements we've done in these supercharged engines, they seem to fail a lot more frequently than the non supercharged engines. Obviously because the engines just accelerate so much quicker and there's so much more load on the moving parts.

Mark: So that's a lot of horsepower that we're getting used to, I guess, with these big SUV's. We know it performs really well. Is it reliable?

Bernie: Yeah, I'd say so. You know, I mean, it's a Range Rover. We talk a lot about the reliability issues. I can probably make a list on my 10 fingers of how many things happen to these vehicles. Timing chain issues. This is a 2015, we've yet to do a timing chain on that model year or whether this one will need it. Hard to know. They may have changed things up to the point where they don't fail as frequently. But I don't have any evidence to see that's happening. You know, there's timing chain, supercharger nose cones, suspension bushings is common on Land Rover / Range Rover products for years and years. Air suspension issues, specifically the compressors. I think I've covered it, you know? There's the sway bars. Yeah, there's a lot of stuff. I don't know if I've used all my 10 fingers yet, but there's a lot.

So anyhow, I mean, there are great vehicles. They make as I often say, they make for a very good used value because they depreciate so heavily. So if you're okay to spend a few extra dollars on car maintenance and repairs, it's a great vehicle to buy used. But also a beautiful vehicle to buy new. If you have the money.

Mark: If you want to cruise in powerful luxury, this is the ticket, the Range Rover.

Bernie: Yeah, actually I didn't mention we talked about performance. I think the zero to 60 spec on this is just over four seconds, which is unbelievable for a SUV that weighs over 5,000 pounds. It's, I mean, that's a lot of power and get up and go and you know, apparently this car is good on a track too. So that whatever they've done to the suspension, you know, it's for a beastly vehicle , it's nice to know you can go off road into the bush in style. Or you can go zipping around a track and probably beat a lot of other cars out there.

Mark: So if you're looking for service for your Range Rover, experts in Vancouver are Pawlik Automotive. You can reach them at (604) 327-7112. To book your appointment, you have to call and book ahead. They're busy. Or check out the website pawlikautomotive.com. There's hundreds of videos, including many on Range rovers, land rovers. As well, the YouTube channel Pawlik auto repair, same thing, eight years worth. We've been talking about these vehicles for a long time. Thank you for checking out the podcast. We really appreciate your listening. Thanks Bernie.