Mark: Hi, it's Mark from TLR. I'm here with Bernie Pawlik. The owner of Pawlik Automotive in Vancouver, 24 time winners of best auto repair in Vancouver as voted by their customers. And, obviously Vancouver's best auto service experience. We're talking cars. How are you doing Bernie?

Mark: So today's victim 2015 VW Sportwagen Golf TDI. It's got a long name. The engine failed. What was going on with this vehicle?

Bernie: So the vehicle came to our shop towed in from a, I guess it had been previously at a Volkswagen dealer, they'd done some exploratory investigating on the vehicle. Found the engine had basically blown apart and needed to be replaced.

He wasn't too happy with their price quote. So he brought it to us. Liked what we had to offer better.

Mark: And so what happened to the engine?

Bernie: Well, what we'd believe happened is the engine ran out of oil which is kinda surprising. We'll talk more about the engine in a little bit, but the vehicle has said, it came to us with the valve cover off, they'd done some exploratory looking and you can see there was pushrod rocker arms that had popped off, lifters broken. So that the upper, the valve train has suffered some catastrophic failures. Not to mention, you know, the engine wouldn't turn properly either. So something had come apart broken. If it ran out of oil, well, that would kind of explain things.

It certainly wasn't full of sludge, which would indicate the engine you know, hadn't had the oil change in a long time, but this is what we found. Why don't I just show some pictures? 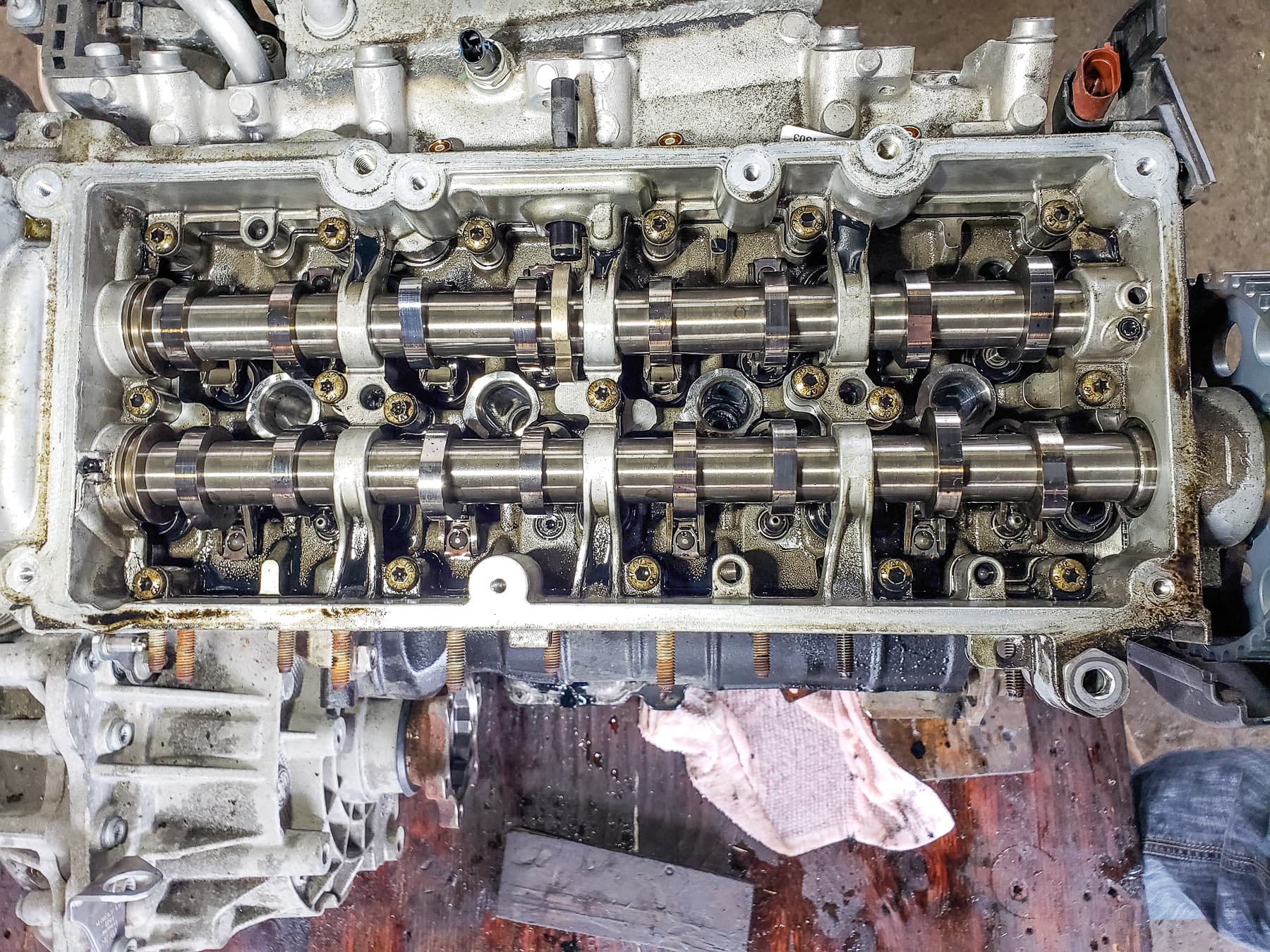 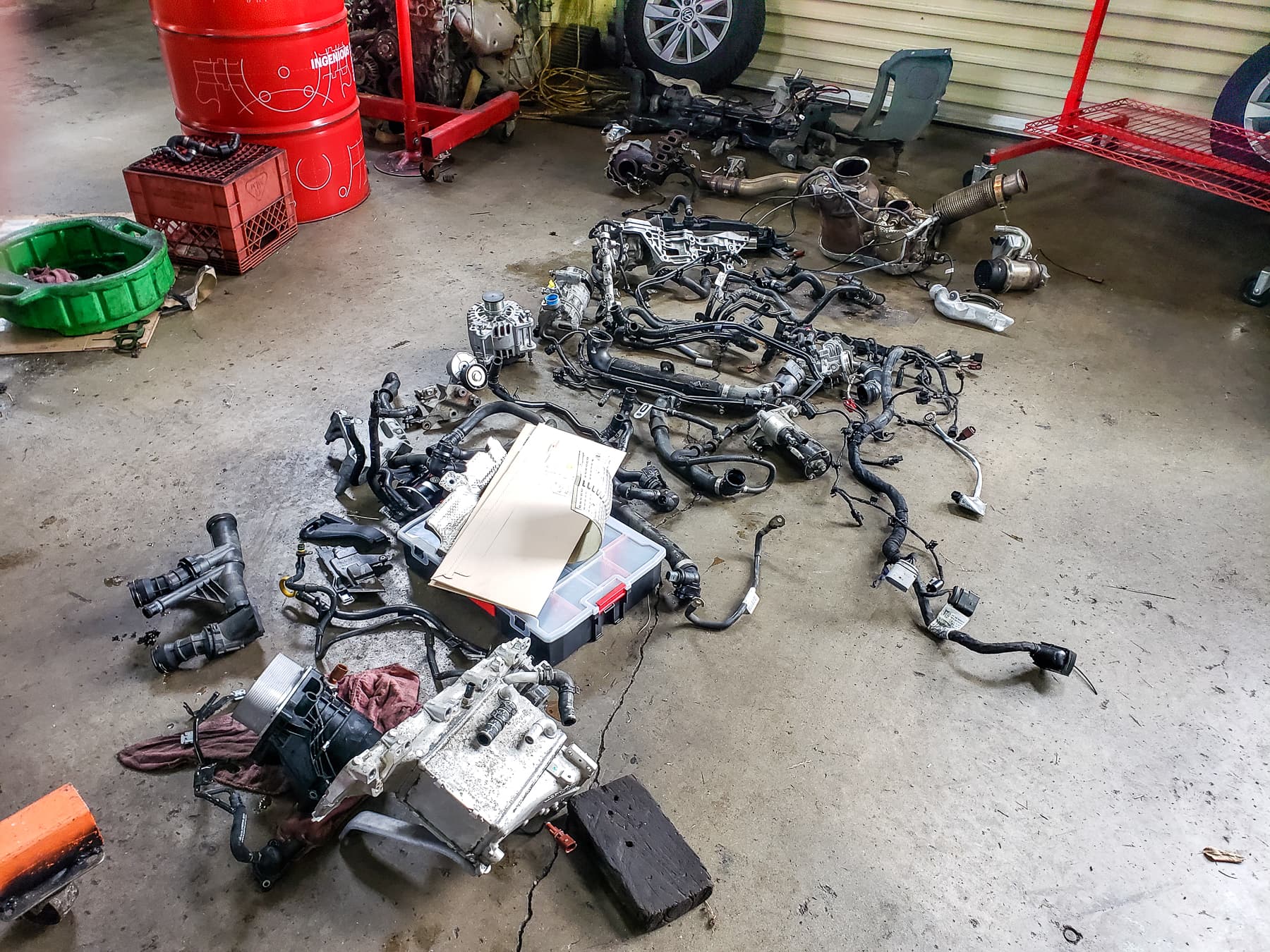 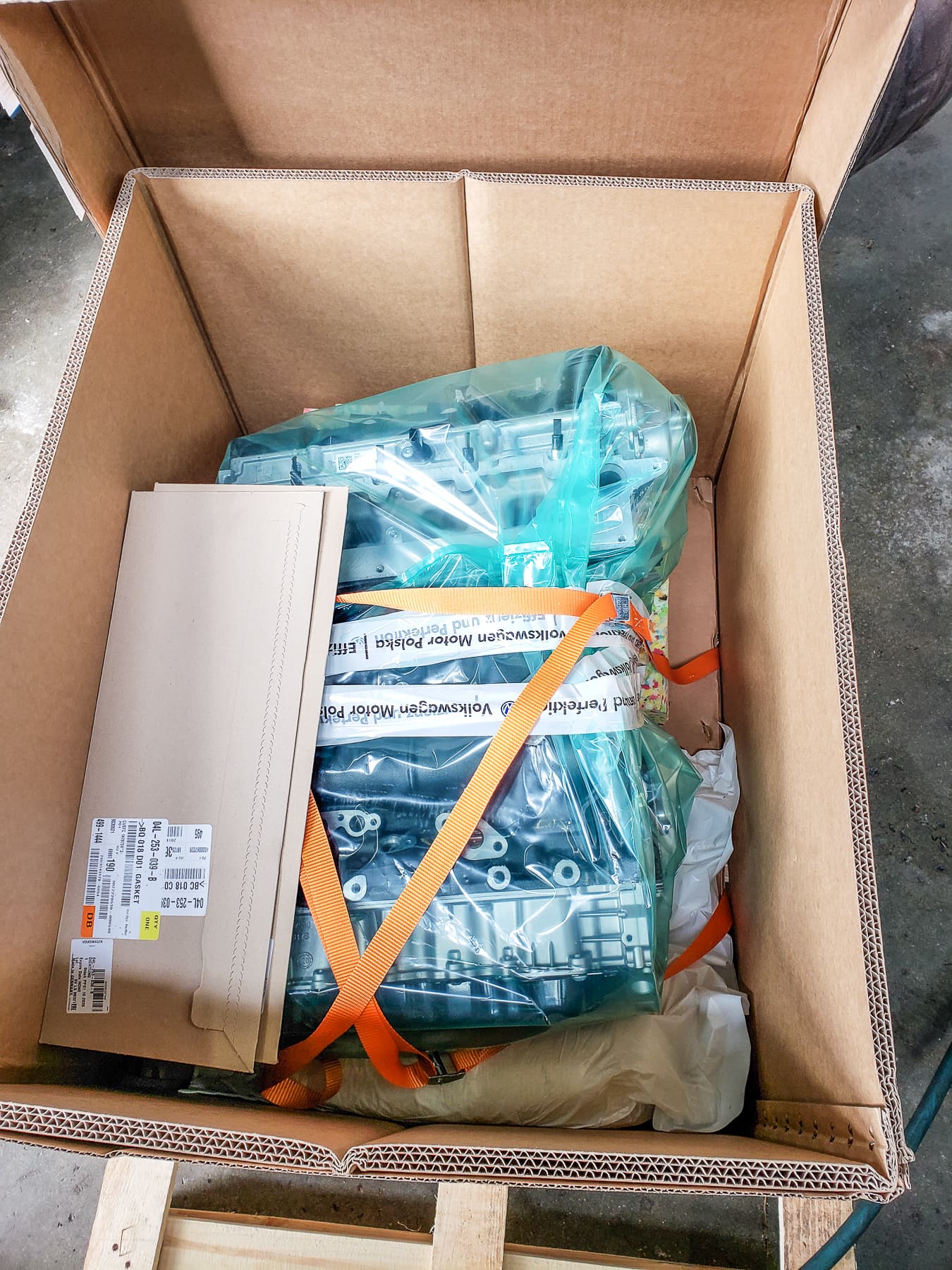 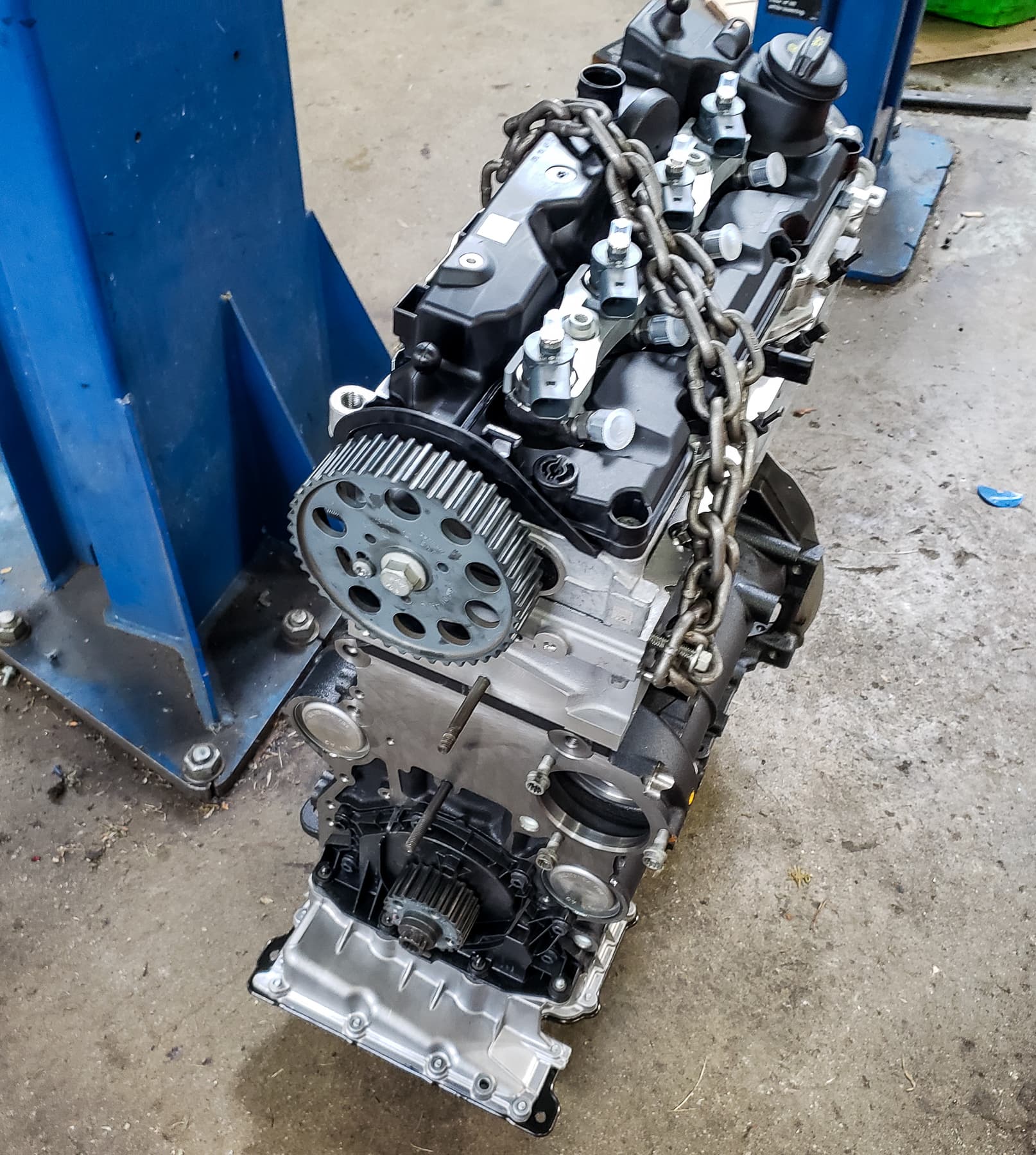 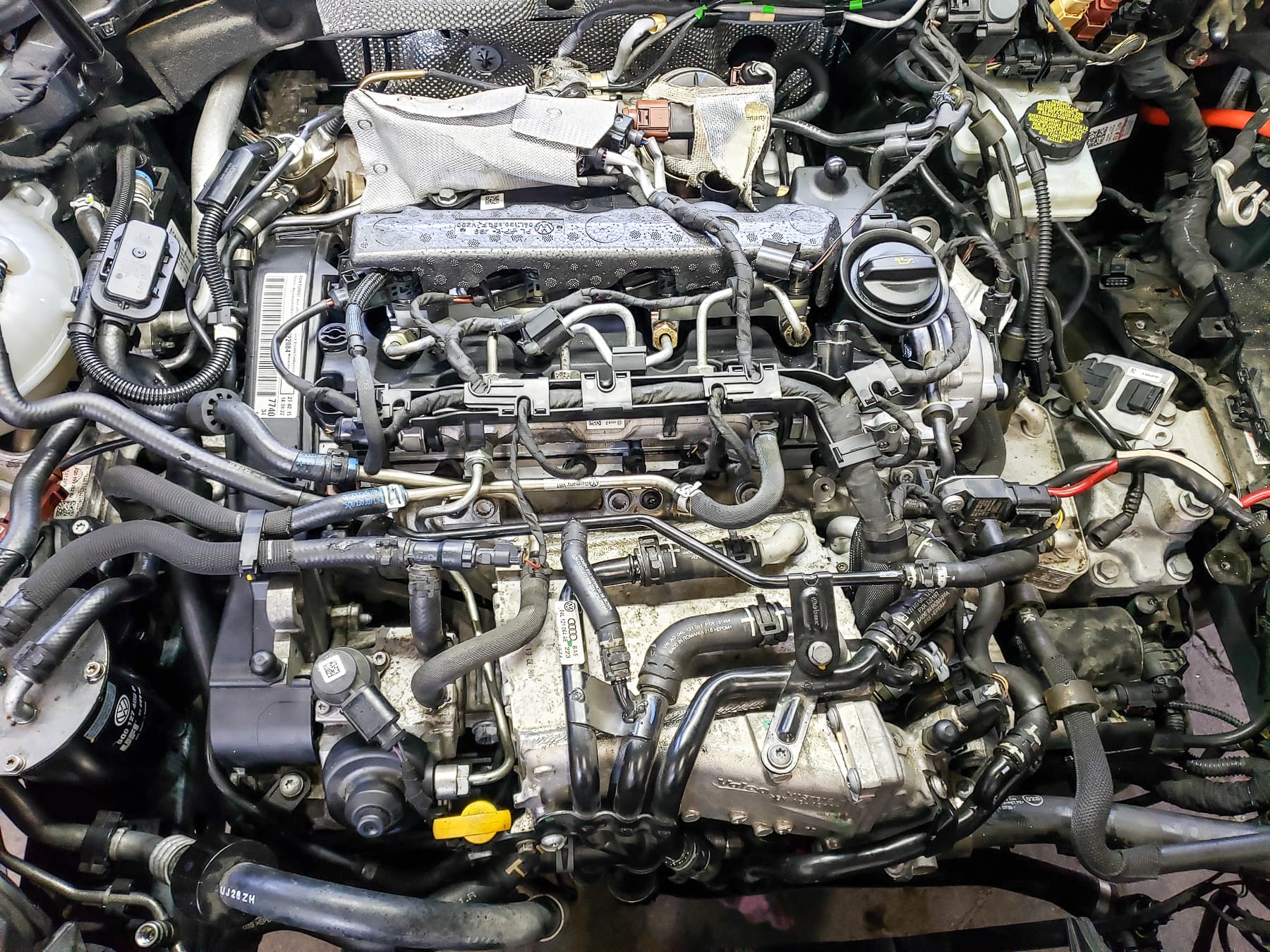 So here we are, this is after we removed the engine from the vehicle. This is a kind of a view into the valve train. You can see the camshafts located here, where I'm kind of moving my mouse pointer.

We never dismantled the engine any further than what we needed to, to replace it. So we don't know what happened in the bottom end, but seeing this as enough to know that there was a catastrophic failure.

Mark: So what's involved in replacing the engine?

Bernie: So for this vehicle, you basically drop the cradle down remove quite a few components and then pull the engine and transmission as an assembly down through the bottom of the vehicle. Here in this view here, you can actually see the engine is still attached to the transmission, which is located over here.

So you know, once this is down, then we actually separate the engine from the transmission and transfer whatever components we need. And we can get into our next picture, which is a good view of all the bits and pieces that were laid out underneath the vehicle that had to be removed from the engine. They're kind of laid out in a nice order of how things were removed.

So here's the steering rack, parts of the exhaust system just sort of looking at various components. I mean, there's wiring, there's coolant pipes, there's air intake pipes. The alternator is located over here, AC compressor, EGR cooler and intake. This is what we have to remove and replace in order to do this engine job. So it's quite a bit and the transmission and the engine are sitting off to our left or the engine block, I should say.

So next of course, how do we replace the engine, because there are several different ways you can replace the engine. There are used options available. We ended up getting a brand new engine from Volkswagen because actually it was really, I would say cheap for the kind of engine. If 7,000, almost $7,000 Canadian is cheap. I think it is for a diesel engine. This is how it came in a nice box on a, on a pallet because it's not exactly light, but nicely packaged up with a few gaskets. But this is a long block, so there's a lot of components that needed to be changed.

So again, the engine ready to be put together. It comes with, you know, the valve cover on, new fuel injectors which is always a good thing. So from here you can see there's no timing belt on the engine and these are other components we had to replace it at the same time. This engine, I said, it's a good price, but it doesn't come with every single piece. So we needed to acquire another timing belt. A water pump, a timing belt tensioners, and these are things we all replaced because we certainly don't want to put anything used and old on it, even though this vehicle didn't have a lot of mileage, we didn't want to put anything old with a new engine, and risk any problems happening.

So basically there's a number of other components that need to be replaced at the same time. And here's a view of the engine installed in the vehicle. Afterwards, you can see all those bits and pieces and parts that were once lying on the floor are all put in. There's the engine block now sits here. There's the covers over the timing belt area, where that open gear in the last picture was. Pipes for the fuel injectors, the injection pump in this area here, EGR cooler and intake. So that's basically how things look when it was all put back together. I think that concludes our picture show.

Mark: So a huge repair on an otherwise, I had two of these cars in my diesel days. So this is an exceptionally durable engine. What can a TDI owner do to kind of prevent this sort of catastrophic failure from happening?

Bernie: Well, I say this is for TDI owners, but as for any person who owns a vehicle with a internal combustion engine, which is still most cars in the road, check your oil, have your car maintained. Look for fluid leaks. Check your oil level. Some cars have warning lights that will come on if your oil level's low. I've a BMW X3, it doesn't have a dipstick. It has a warning light that comes on if your oil is low, but you need to know whether your car has that or not. Some cars have it, some cars don't. Some cars that have low oil warning lights have dipsticks, and you should check your dipstick every once in a while. It's a good thing to do. So you need to know those kinds of things. You need to check your oil.

How often should you check your oil? Well, if it's a really old car that you know, goes through oil, you'll need to check it every time you fill the tank. A car that's more reliable, maybe every several tank falls, but it's a good habit to get into because it'll save you a lot of money. This vehicle, by the way, I didn't mention, we only had 42,000 kilometres. It's a practically, I mean, you know Mark you've owned these cars. I mean, these TDIs, they can go for 400,000 kilometres or more.

Bernie: Yeah, exactly. Well, this one didn't get broken in. It just broke. But every once in a while you have bad luck and things do break on even on a well-maintained engine. And then the other thing of course has changed your oil, change it when it needs to be done. Now, if the oil change interval on an engine like this is every 15,000 kilometres, for example, you know, this vehicle is not being driven very much.

You probably need to up the oil change interval because you're time frame as much longer, your oil gets contaminated, much easier on a car that isn't used a lot. So if a car's run, it's hot, you're doing a lot of highway driving. You can stretch it out longer. If you're doing short city trips and not much driving, you need to change it more frequently.

Mark: So let's just digress for a second. 2015 with 42,000 kilometres and a TDI. This is actually the wrong car for this person to have purchased.

Bernie: I would say so, yeah. If you need to buy a diesel, if you're going to be driving a lot, that's kind of the key and it's easy to get seduced by the numbers you look, and you go, Hey, I can buy a diesel and it gets this great gas mileage. Hey, I'm set. This is awesome, but you really got to look at your usage. Diesels just don't work well, if you're doing short trips, you've got to make sure there's long trips and big drives involved. I mean, you do the odd short trip. No big deal, but you've got to have some long drives some good usage.

Same with a truck. If you buy a diesel truck, don't buy one just because of mileage or it's cool. Like buy one if you need to haul heavy loads. Otherwise it's too expensive to fix and it's not worth the cost. But I believe that when they sold these cars, I know you've bought a couple from new they're priced pretty well, is that right?

Mark: They're okay. It's definitely $4,000 more for the diesel over the gas version. So if you're not driving it a lot, it does not make economic sense in any way, shape or form.

Bernie: It doesn't. And when you think about it, you go, how much gas could $4,000 buy over the price of diesel. I mean, diesel is usually cheaper. It is more efficient. So maybe there's a 30% savings per kilometre. I don't know, maybe even 40, but even if it's 50%, you can still buy an awful lot of extra fuel for 4,000 bucks versus having something go wrong with the engine. So, yeah, it makes a lot of sense. I know you and I've talked about this a lot, because we talk about diesels a lot. It makes sense to know whether a diesel is a suitable thing to own or not.

Mark: Absolutely. So if your TDI, needs some service in Vancouver, the guys to see are Pawlik Automotive. You can reach them at 604-327-7112 to book your appointment. You have to call and book ahead. Or you can book online pawlikautomotive.com. They'll get back to you. They'll find out what's going on. They'll walk you through it. They'll get ready for when you actually show up to your appointment so that they can get the job done right the first time. Of course, we have hundreds of videos on the website and on YouTube, you can check out our YouTube channel Pawlik Auto Repair. We've been doing this for over nine years now, literally close to a thousand videos, all makes and types of models, types of repairs. And we really appreciate you watching and listening. Thank you, Bernie.

Bernie: Thank you, Mark. Thanks for watching. Make sure you maintain your car.