Mark: So today's victim is a 2016 BMW X5 that had an air suspension issue. What was going on with this vehicle?

Bernie: So the vehicle came to our shop, client's complaint was that the rear end of the vehicle would sit low. If he'd leave it overnight, the vehicle would drop and he'd come back to a low sitting vehicle. That was the initial issue, but it started like that. And now it basically remained down. So it was brought into us with the backend down.

Mark: Was a real drag car. So what testing and diagnosis did you do to find the cause of the concern.

Bernie: So the first thing we do is scan the vehicle, test the electrical end of the suspension system, and found that there was in fact, a blown fuse running the compressor. So we replaced the fuse. Everything seemed to be functioning fine. Now of course, a fuse usually blows for a reason. But it just seemed from what we tested and the operation of it, the compressor was probably okay. Maybe just a one-off overload. So we fixed it, let the client have it. And basically everything seemed to be working fine.

Mark: So did it stay working fine?

Bernie: No, it came back the next day. And so perhaps we should have just gone ahead and go, Hey, let's just put a compressor in because the fuse blew. We do find that happens from some vehicles, but sometimes just a fuse replacement is good. And we do try to err on the side of doing things with the most cost-effective manner.

So we did some retesting found the compressor was basically all worn out. You know, would basically draw too much power under certain conditions. So we replaced the compressor, reset everything, and everything seemed to be working fine.

Mark: So after replacing the compressor, did that fix everything?

Bernie: Well, it fixed some of it, but not entirely. So they, again after a day or two, the vehicle had actually dropped back down again, which was kind of a surprise to us because we had looked over the system pretty thoroughly. I'll just get into some pictures right now. So to make a long story short, we found the airbags needed to be replaced. In addition, which was a real kind of surprise for a vehicle of this age. 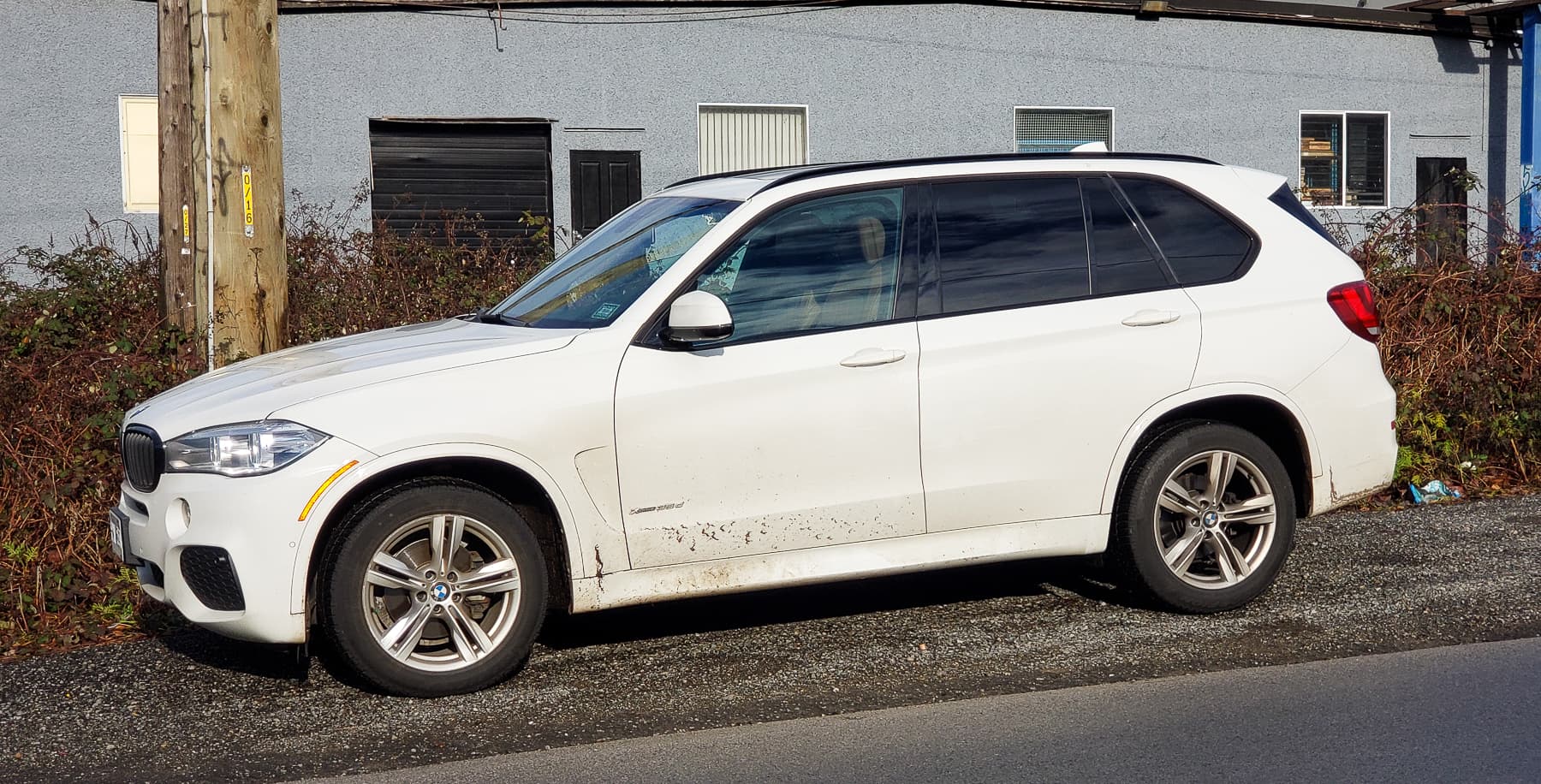 So there's our BMW. A little dirty from Vancouver winter weather. A couple of views. This is where the compressors located underneath the vehicle on the passenger side. Under I guess, we call it the floor pan area. 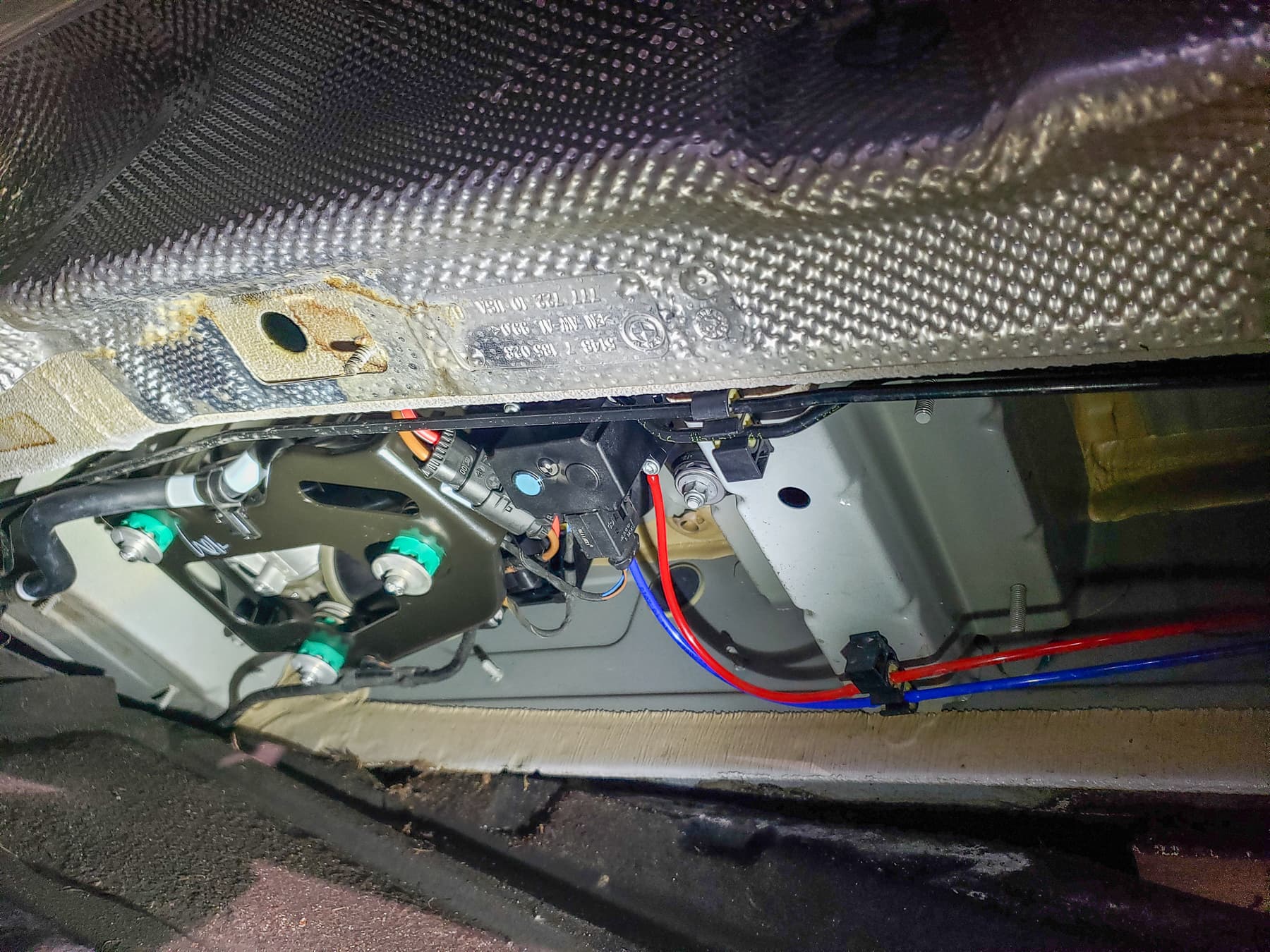 There's a kind of a better view. This is looking towards the front of the vehicle. There's the compressor. There's two lines here. And these go to both the rear air springs. This is actually just a rear only suspension system. It doesn't do the front. So it's there for level control. You know, if you put a thousand pounds of bricks in the back, this will bring the level of the vehicle up to full height. 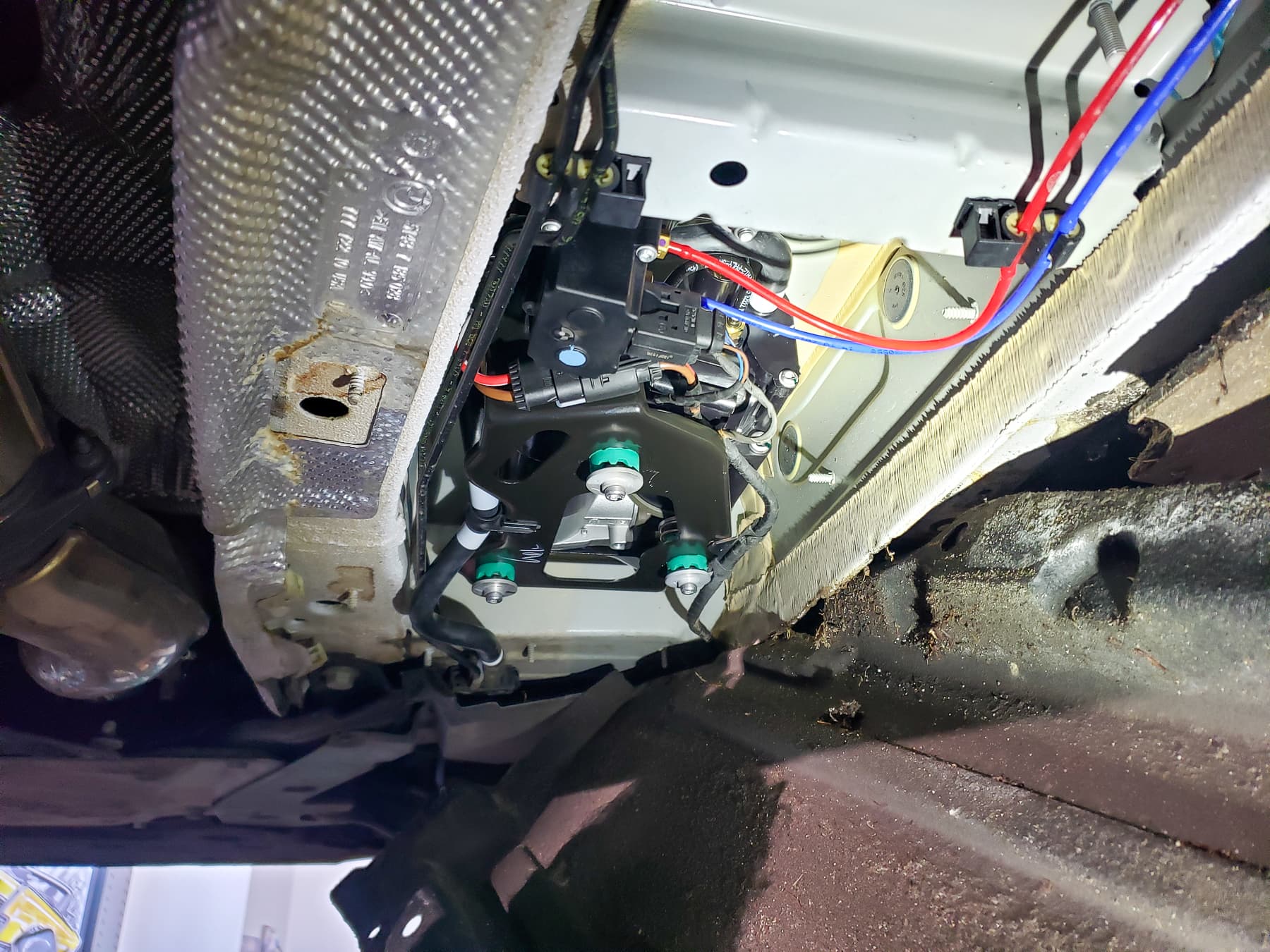 So it's a 2016, didn't even have a hundred thousand kilometres. And we do a lot of air suspension work and it would be unusual to find that the airbags were leaking. We did a visual inspection of them. They all look to be in good shape, no cracks or excessive wear. But of course at this point we had to go deeper into it because it was obviously not working as we'd intended it to.

We found after spraying some tire soap, this is the kind of stuff we spray on tires to find leaks. We found these little tiny pinholes in the airbags, which is very unusual. You look, I mean, there's not even any cracks in this airbag. I mean, down here you know, it looks a little rusty. 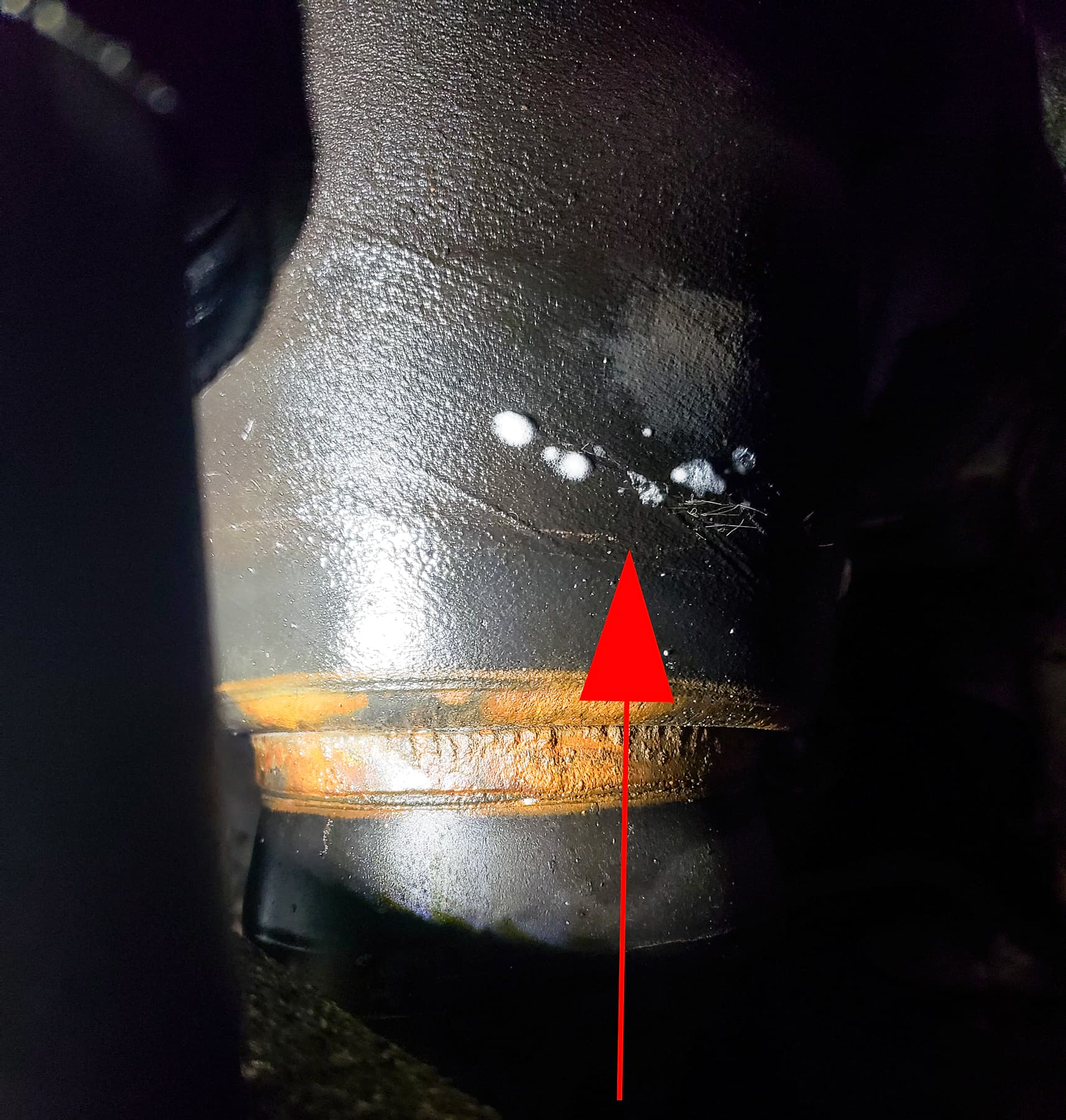 This is just normal kind of wear and tear, you'd see on any sort of air suspension after a couple of years of usage. But it seems like the bags are just made out of a material that got kind of porous and got little holes inside of it. We found this on both sides of the rear. So kind of surprising again for such low mileage. And so we ended up replacing those and everything was good. There's a view of the old airbag out of the vehicle. 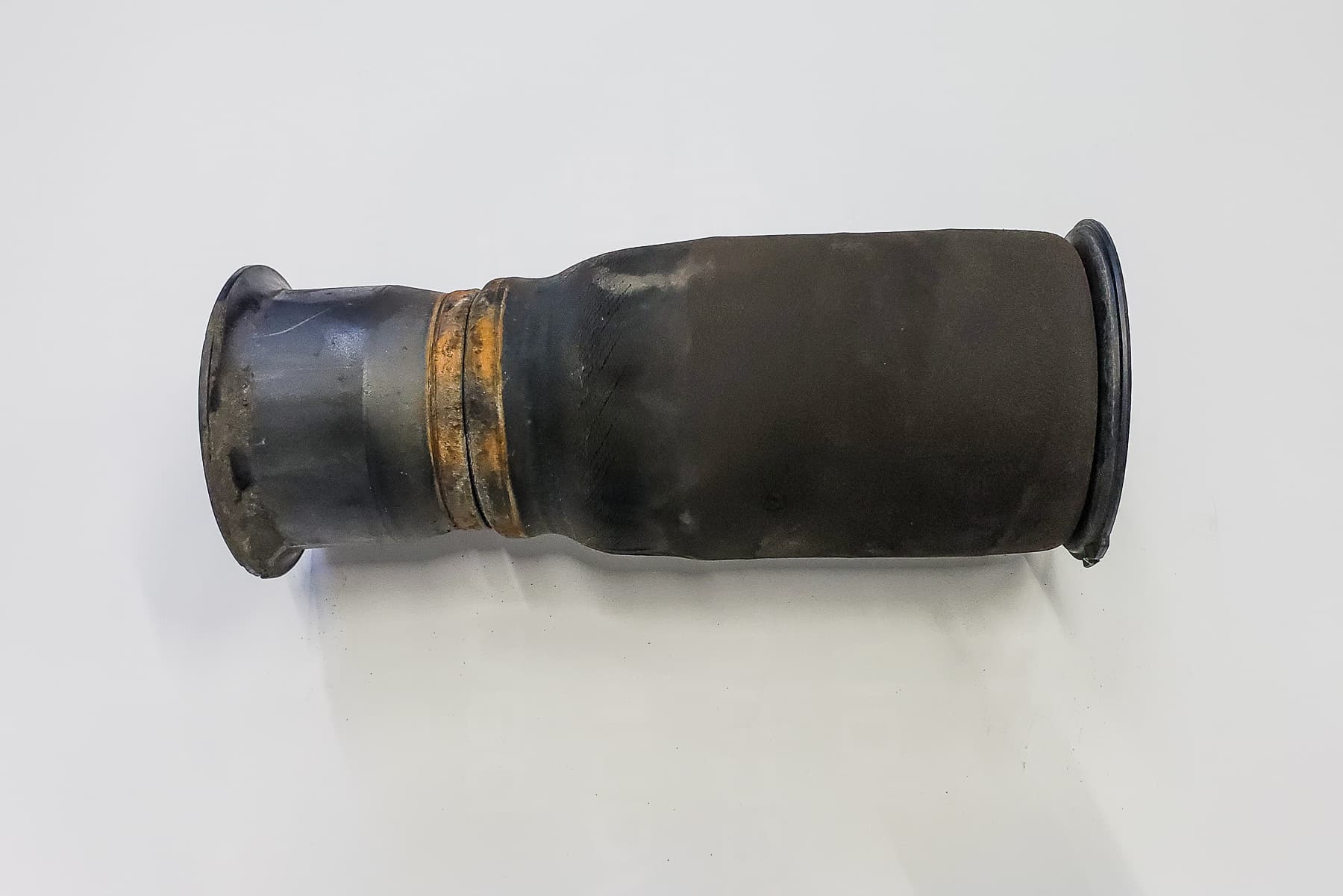 Mark: So that fixed everything, obviously, but is that kind of changed how you're going to diagnose a BMW air suspensions in the future?

Bernie: Well I would say definitely. Every step we took was good. I think just, it would be better I think in future, if we're going to do this over again, to just test the bags, you know, just make sure they're not actually leaking. Because as I said, it's kind of unusual as a vehicle. It's only about five, six years old to have a leaking air. But that, that would be, that would be the thing we definitely do next is to do an actual leak check on the bag.

It's kind of an unusual situation. I mean, another thing I would say is that, you know, the client really did want to have this vehicle back every day. So it was like, okay, let's fix it and give it back as opposed to, Hey we'll fix it, we'll leave it overnight and see how it works. That's often a procedure we prefer to do because it's nice to get a car in and out the door, but if we have it overnight, then we can verify, Hey, wait a minute, that didn't work. Let's go to step two.

And I think at the end of the day, it makes for, you know, a happier client when everything's done first time. We aim to do that with every job, but every job kind of goes differently.

Mark: So how are these, this age range of BMW, X5 for reliability?

Bernie: Yeah, so far so good. They're a pretty decent car, but I have to say I'm not overly impressed with the air suspension system. You know, the air suspension does create issues in all vehicles. It's something that if you have it, it's fantastic. Things will happen. But generally I think these X5s are definitely built better than the older editions. If we go back a couple of generations. Much more reliable, but of course this is only six a year old vehicle at this point. So time will tell, but a nice car, for sure.

Mark: If you're looking for service for your BMW, any model the guys to see in Vancouver are Pawlik Automotive. You can reach them on their website to book pawlikautomotive.com or you can call them (604) 327-7112 to book your appointment. You have to call and book ahead or book online ahead of time. They're busy. Of course there's many hundreds, literally hundreds of articles, videos we've been doing this for 10 years. Every week, week in, week out, we put up another video on a repair, different makes and models, all kinds of repairs. Same thing on the YouTube channel Pawlik Auto Repair. Check it out. If you're feeling sleepy or not feeling sleepy, you can watch us. We'll put you to sleep. I guarantee it. And thanks so much for watching. Thanks Bernie.

Bernie: Thanks, Mark. Thanks for watching. And thanks for listening.