Mark: Hi, it's Mark Bossert here from Top Local. We're here with Bernie Pawlik, Pawlik Automotive in Vancouver. 22 time winners of Best Auto Repair in Vancouver as voted by their customers. And we're talking cars. How are you doing this morning, Bernie?

Mark: 2016 Honda Civic. That was in for an A Service. What was happening with this Honda?

Bernie: Just a maintenance service. The vehicle is due for service. Nothing, no complaints of any sort and so we performed an A service.

Mark: So what do you do during an a service?

Bernie: So the A service is our most basic service. Consists of an oil and filter change and then a vehicle inspection, a basic inspection. We do all our inspections on a two post hoists, so we have the wheels off the ground, which is a good thing to do every once in a while. We can wiggle the tires, wheels, make sure there's nothing loose in the suspension. So we do a basic suspension inspection that occurs. We adjust the tire pressure, inspect the tires, have a look underneath the vehicle for fluid leaks. We inspect all the fluid levels, make sure they're all full and clean. We look at lights. And an under hood inspection, belts, hoses, those types of things. Anything we can see, we look at, normally inspect the air filter. It depends on the car. Some cars it's complicated to look at the air filter, so there's an additional charge and usually a different way of approaching it, which we wouldn't do on an A service. But a Honda is generally pretty easy. So we inspect the air filter as well at the same time.

Mark: Does the owner receive a written inspection report?

Bernie: Well, we do one better than a written inspection report, and we've talked about this in some of our other podcasts, but we have a digital inspection system so our technicians will look at the vehicle and they can record all the information on a, it's an app. You can either use it on a smartphone or a tablet and take pictures of things that are interesting. Say there's a fluid leak of some sort or a loose ball joint. We actually do a video capture of that and then we send it to the owner by a text message or by email. Yeah, there's a link. You can open it up and look at the inspection and it's pretty awesome. A lot of people give us nothing but positive comments cause you can, it's like being in, you know, being in the shop and having everything point. It's almost better than having everything pointed out to you.

Bernie: Exactly. We have the checklist. I've customized some of the checklists that we do and, and they're vehicle specific. So you know, if the vehicle is a diesel, you know, it has diesel exhaust fluid for instance. That's one of the things that's looked at as part of the checklist. If it's a four wheel drive, there are check boxes for transfer case fluids, but if it isn't a four wheel drive, it just, the box doesn't need to be checked. But they're very specific items depending on the vehicle.

Mark: How many kilometres were on this vehicle?

Let's just have a look at some pictures and we can keep talking while we're doing that. 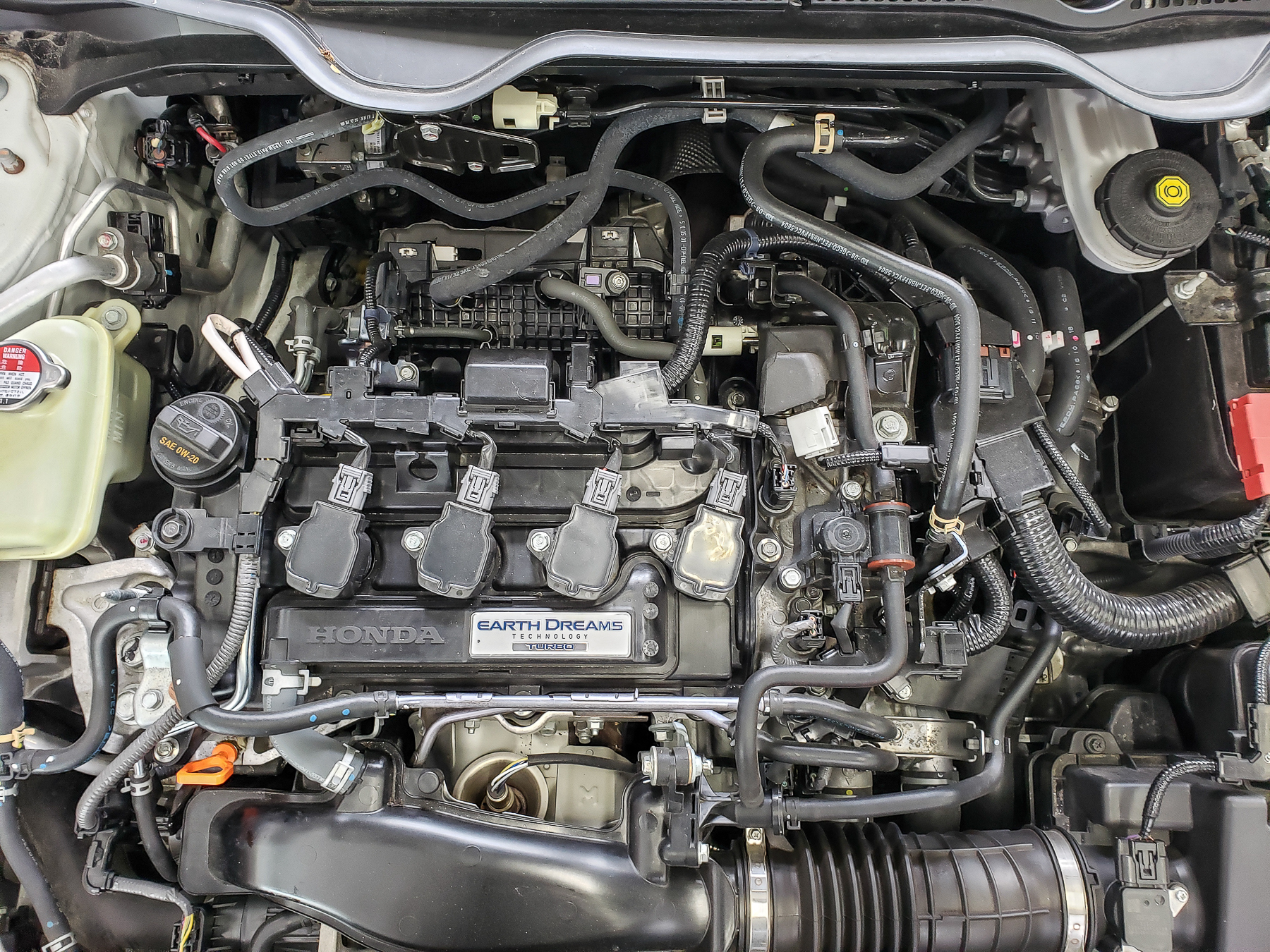 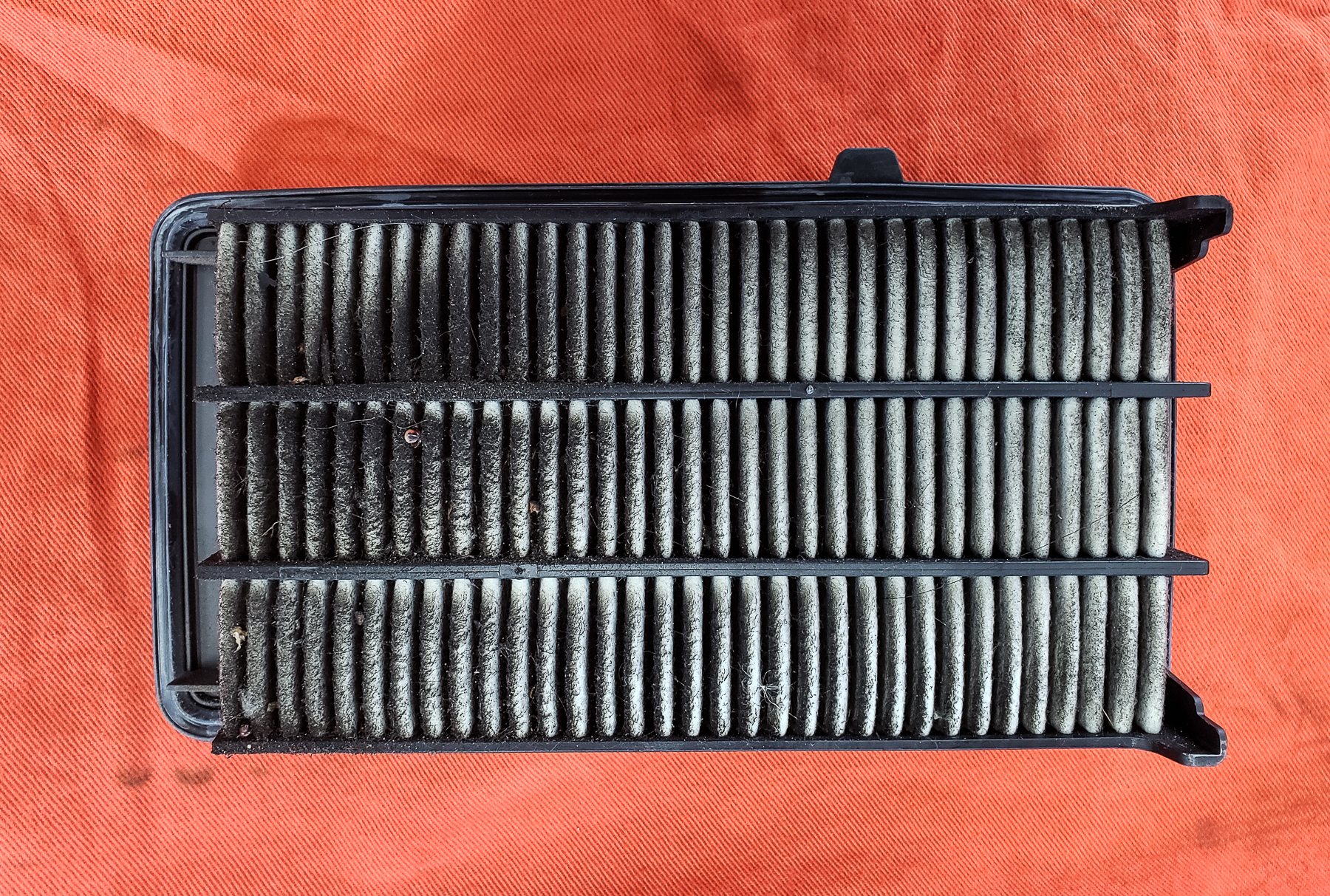 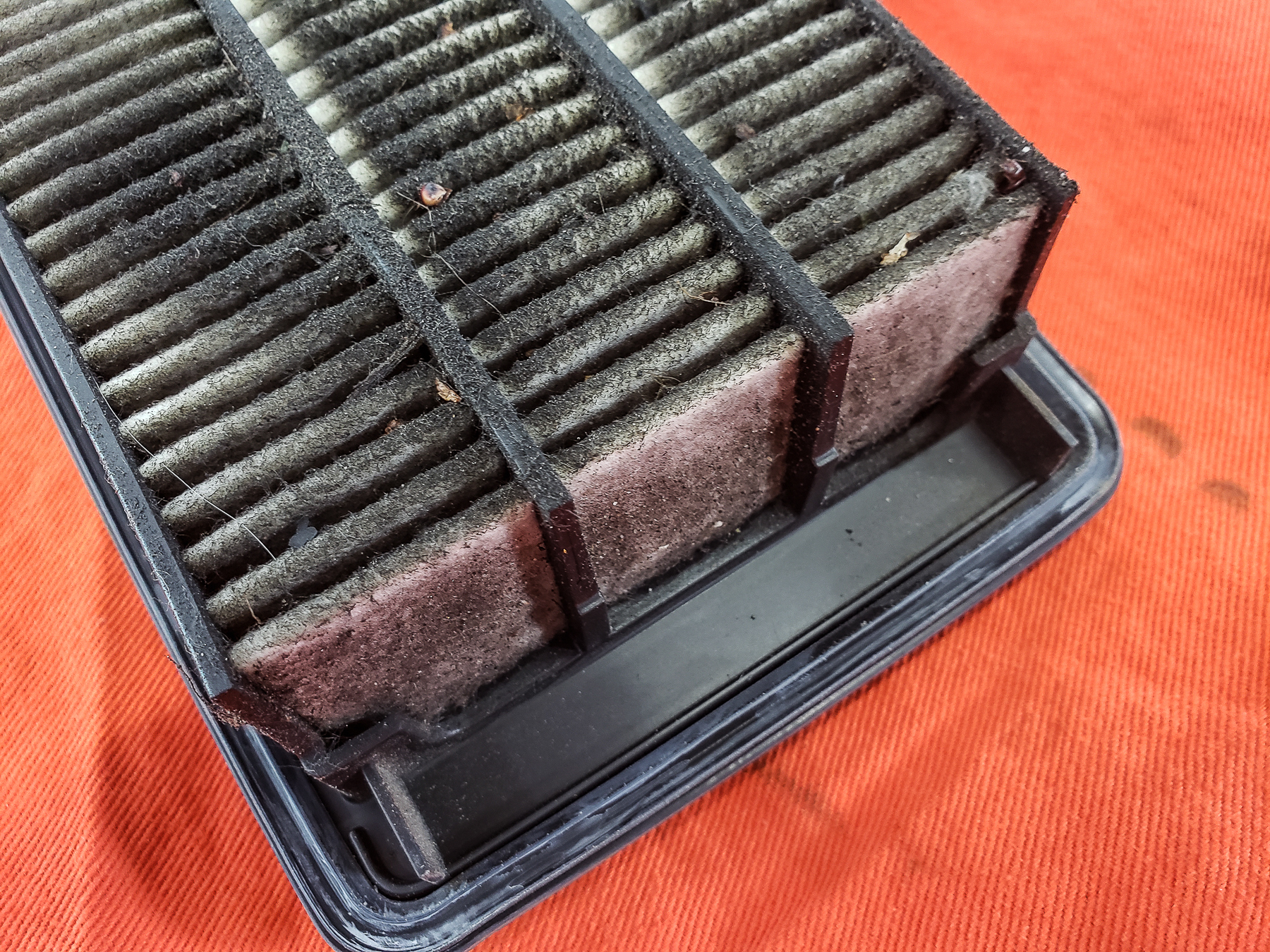 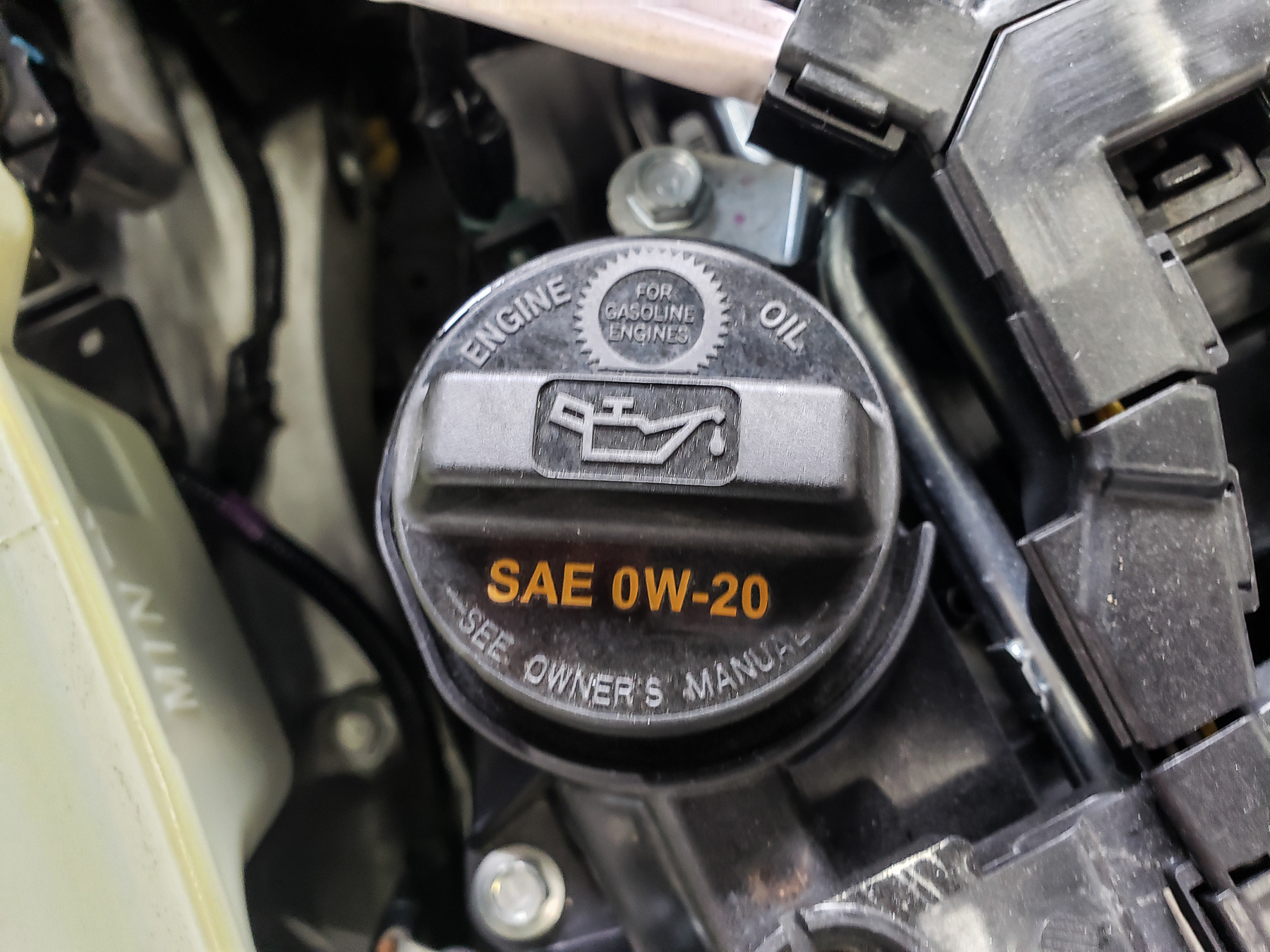 Our 2016 Honda Civic, this is a turbo model by the way. So pretty cool. You know, it's a nice upscale model and a pretty cool looking car. I was thinking about Honda Civics and how this is the 10th generation of Civic now and just thinking about the first generation I used to, I've been in the trade long enough. I remember working on first-generation Civics a '75. I think they started selling them in Canada. At least that's when I was kind of aware of them. It's a changed car for sure. And so a lot different than what we used to have.

Let's get into a couple of other pictures here. The engine two litre turbocharged. So it's peppy. It's got some power. This Honda Earth Dreams technology. I can never quite figure out what that means, but, it's their branding for whatever reason.

Bernie: Yeah, exactly. Well, it has it on the, under the hood of your Clarity too which is maybe closer, but, yeah, I don't know exactly what that must be. That must be it. So basically, you know, you've got our internal combustion engine here and these are the ignition coils, one of the items that is actually easy and quick to service on this vehicle. Transmission located here. I know we did a posting on a Clarity recently on your car, you know, and it looks a lot different under the hood, a lot more complex with a big bright orange cables running around. There's none of that here. So everything here just services, the transmission, the engine, and the internal combustion engine.

What else do we got here? Air filter. This is one thing we found that was really urgent to replace. And you can see it doesn't take too much experience to look at this air filter and go, that's a, that's a pretty dirty filter. I even photographed on two angles. It was so dirty. So probably an original filter never been changed and we often find that we get vehicles that have been serviced elsewhere, a lot of dealer service vehicles, and the air filters are really dirty. And I don't know why. I'm assuming the technicians just never look at them there. They just wait until there's a certain prescribed time to change the filter. And then that's when they look at them. So we inspected every time, as long as it's accessible and we find they're dirty most of the time for vehicles that are new to our shop. Zero 20 oil is what this vehicle takes with a lot of Honda's and a lot of new new generation vehicles take, it's a very thin oil, reduces friction. You know, it takes less energy to pump a thin oil and the engines are built and designed for that kind of thing. So there we go.

Mark: So Honda has a reputation for reliability. How's the 2016 Civic?

Bernie: It's an excellent car. You know, it's just, it's up there with all other Honda's. It's on my recommended list. Not much else I can say about it. It's you know, you can pretty well count on just doing a basic maintenance services for a long time on this vehicle. A few fluids here and there. And some brakes, tires, you know, but nothing major. No major breakdowns. They're good cars.

Mark: There you go. If you're looking for service for your vehicle in Vancouver, the guys to see your Pawlik Automotive, you can reach them at (604) 327-7112 to book your appointment. You have to call and book ahead. Even now, they're still busy in the midst of the pandemic. They're still open. They're still servicing cars. People still got to get around. You still got to get to the grocery store to get your groceries, even if it's just once a week and you want your car reliable, this is the time to get it fixed. They may be a little less busy than usual just because they're downsized a little bit, but give them a call, (604) 327-7112 to book ahead and they'll get you looked after. Again, 22 time winners of Best Auto Repair in Vancouver. You can check us out on pawlikautomotive.com. Hundreds of articles on there. Pawlik Auto Repair, the YouTube channel. Of course, if you listen to us in a podcast we'd love a review on iTunes. Five stars is always nice if you feel that way, so inclined and thanks Bernie.