Mark: Hi, it's Mark from Remarkable Speaking. I'm here with Bernie Pawlik of Pawlik Automotive in Vancouver, BC, Canada. 24 time winners of best auto repair in Vancouver as voted by their customers. And we're talking cars. How you doing Bernie?

Mark: So we're gonna talk about diesel particulate filters on a or filter on a 2016 Range Rover. What was going on with this diesel vehicle?

Bernie: So this vehicle actually had a warning on the dash that says particulate filter plugged or change particulate filter. So it was pretty obvious right to the customer. You know, that the unit was at the end of its service life and needed to be replaced.

Mark: So, is there any testing and diagnosis that you had to do?

Bernie: There's some testing we do. We look at scan tool data and evaluate, just make sure that it, in fact, you know, just because warning light says do that doesn't necessarily mean there isn't something else that's causing it, like a bad sensor. So we did do a basic scan and evaluation. Looked at it and in fact, the particulate filter was plugged. So it was time to change it.

Mark: And how difficult of a job is it changing the DPF, diesel particulate filter on this Range Rover?

Bernie: Well, this one wasn't too bad compared to some other vehicles we've done. We've featured, I think a few podcasts. I know we did one on a BMW X5. So that's a kind of competing vehicle. Sort of mid-size SUV. This one wasn't too bad to replace. The interesting thing is the actual DPF is actually part of the whole exhaust system, but when they sell you the unit and actually I might as well just get in the picture right now. 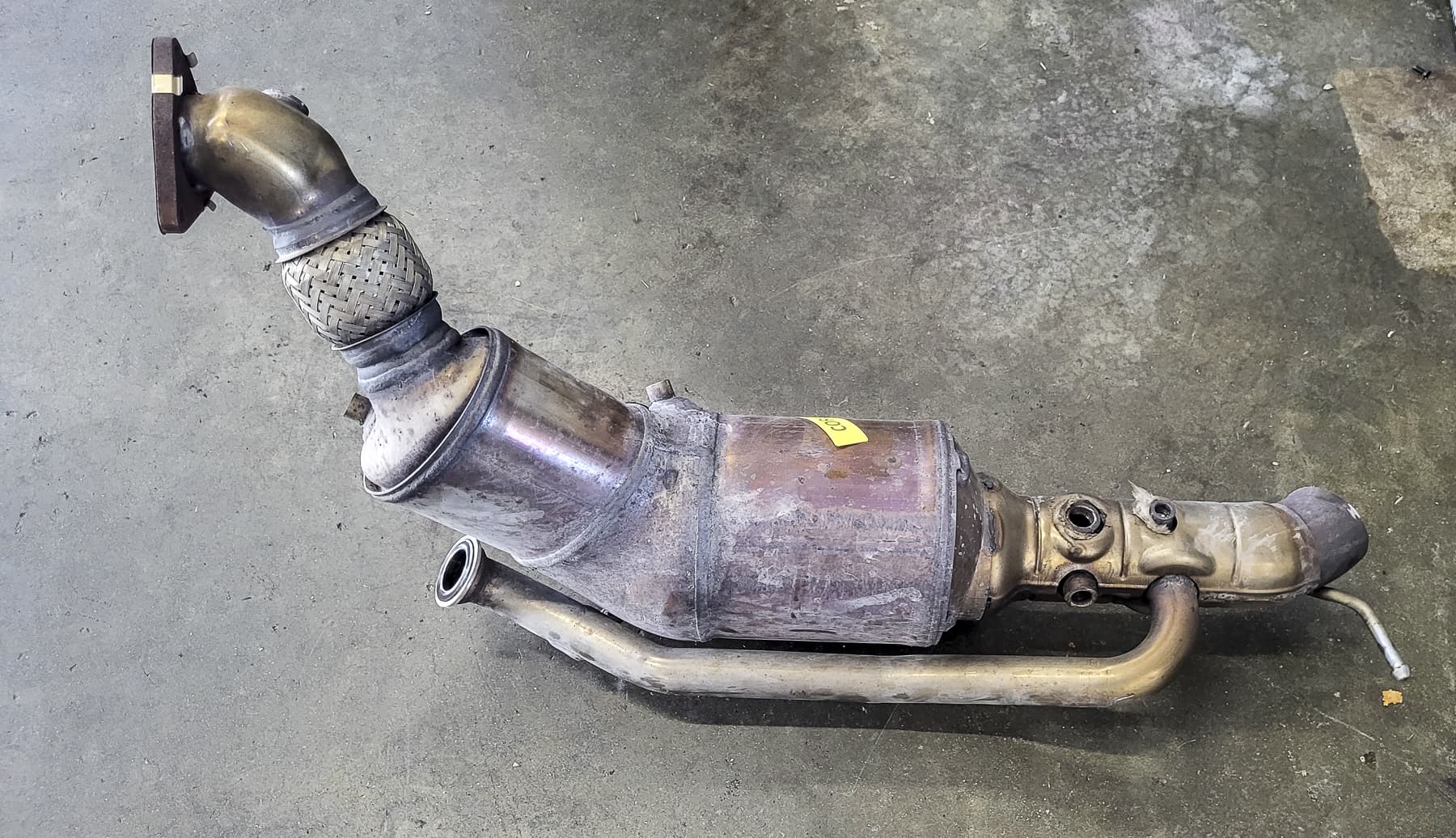 They actually just sell the DPF section of the unit. So this is a picture of the old one we took out. This FLA here, bolts up to the turbo charger, and you've got your flex coupling here. The DPF is located in this area here. Holes here for various pressure sensors, oxygen sensor, the usual items that every DPF vehicle has.

But this exhaust, when we bought the replacement unit, this pipe had a clamp built onto it. And so what you do is you actually, on the vehicle as it was, you actually have to cut the exhaust exactly the right spot, and then put the DPF in, because I guess when Land Rover manufactures it and puts it in the Range Rover, the exhaust system is one complete piece from front to back.

Bernie: Yeah, but I mean, these are always a bit of work because the sensors are often difficult to remove after a few years. This is a 2016, so only six years old, not that old. They can often be stuck and seized, especially when they get older.

It's almost better with these parts when you have to replace them when they're a little younger, because you have a better success of doing them without having to replace a bunch of other sensors that tend to break or seize up in the process. So wasn't too bad of a job.

And you know, we did talk about a recent one we did on BMW X5, where we had the particulate filter cleaned. This one we opted to replace it with the new one, cuz the price wasn't too bad. It was a bit over $3,000, in Canada, for this particular part which I think a pretty reasonable price for an OEM DPF, as opposed to the BMW one was $5,000. And on a back order where this one just took a couple of days to get.

Mark: What's that return pipe that you can see there?

Bernie: Probably an EGR pipe. I can't say for sure, but sometimes EGR system will be connected up to this. I don't know for certain. I'm thinking too, it might be related to the SCR system, which has the urea injector. It may have been located up here. It might be further back. I can't quite remember, but it might have been located into this part of the system too. So that's another catalytic converter that's located further back that does further NOx reductions with the diesel exhaust fluid.

Mark: So this filter is basically taking out the soot out of the diesel exhaust. Exactly. Essentially. Yeah. And when you actually have replaced this piece, welded it back in place and put all the sensors back in place. Do you have to do any reprogramming once you put the part in?

Bernie: No, this one's pretty straightforward. Sometimes you do have to just reset, there's some memories that are stored in the computers, but this one didn't require any such thing. Usually it's kind of a plug and play item. And that message that came up on the dash and if there's a check engine warning light that comes on, it'll usually come on because there's too much pressure on one side, like going into the DPF, the pressure will be too high. And basically the exhaust system is partially plugged.

So it can sense that. Usually once you run it, you know, it immediately knows, Hey, you know, there's free flow now. So it knows that things are worked better. Sometimes there are memory systems to reset. On this particular vehicle it's pretty straightforward from an electronics perspective.

Mark: So after it's all replaced, everything is working fine?

Bernie: Yep. All good. Warning light's out and full power in the vehicle and the away you go.

Mark: How are these Range Rover diesels for reliability?

Bernie: I'd say they're kind of mixed. You know, they're not too common. We seem to get a few of them in our shop. And this is the first DPF we've done. But we did have one a while ago where the guy's engine was actually blown and it only had 50,000 kilometres. Like it had a deep knock in the engine. Pretty horrible actually. Maybe it was a little more than 50 Ks, but it wasn't very much that you'd expect out of a diesel and not sure why that happened.

So I'm not sure how reliable these are overall. When I see something like that, that happens. It does make me question how good they are in the long run. That engine too, I think we priced it as like $30,000 or $40,000 or something. Something insane. And nothing used available. We looked everywhere for one. So when stuff like that happens, I feel just very sad for people who own that vehicle. Cuz it's just a horrible situation to be in. And certainly nothing, you know, easily repairable.

Anyways, you just need to make sure you do your oil changes, your services. Who knows what, that other unit, you know, this person that bought it used how it had been maintained. Maybe someone had not changed the oil.

Mark: These are very, very sensitive to not having their oil changed.

Bernie: Yeah, they are. And a lot of these have longer oil change intervals than you'd think, you know, but it's good to change them more often. Get out in the highway, use them, get them hot. You know, if you're driving around the city a bit, make sure you get a good highway drive once in a while.

Mark: So, if you're looking for service for your Range Rover or diesel vehicle in Vancouver, the guys to see are Pawlik Automotive. You can reach them on their website, pawlikautomotive.com. You can book right there online. They'll call you. They'll find out what's going on. They'll investigate a little bit with you over the phone and get ready for your appointment. Or you can call them at (604) 327-7112. Sometimes hard to get them because they're a little bit busy. Always. You have to call or book online. In Vancouver, BC, the guys to see Pawlik Automotive. Thanks so much for watching. We appreciate it. And thanks, Bernie.

Bernie: Thanks Mark. And thanks for watching. Thanks for listening.