Mark: Hi, it's Mark from Remarkable Speaking. I'm here with Bernie Pawlik, Pawlik Automotive in Vancouver. Vancouver's best auto service experience and you know already, it's 24 times they have been the best auto repair in Vancouver as voted by their customers. People you can trust, essentially, and we're talking cars, how are you doing Bernie?

Mark: So today's victim is a 2016 Range Rover Evoque that had some radiator issues. What was going on with this vehicle?

Bernie: So this vehicle came to our shop with some coolant leaks. There was coolant leaking under the vehicle and that's what we looked at and diagnosed.

Mark: So what kind of testing and diagnosis did you do?

Bernie: Well, first of all, a visual inspection to look around and see where it leaks were coming from and then from there we put a pressure test on the cooling system, which basically every cooling system on a vehicle is under pressure. Usually it'll release at about 16 PSI is kind of average, some cars are 13, some are around 20, but usually around 16. So we have a pressure tester we put on, adapts the radiator, pump it up with about 16 PSI pressure and that kind of strains the system to the maximum pressure. And then we could find leaks faster.

So we found two leaks actually, one from the bottom of the radiator and one coming from the heater hoses, which are at the back of the engine. So two leaks to different parts of the vehicle.

Bernie: Well, as I said, there are two separate areas on this vehicle. I think I'll just get right into some pictures because it's a pretty involved procedure. The radiator alone, we'll start talking about that. And here's some pictures. 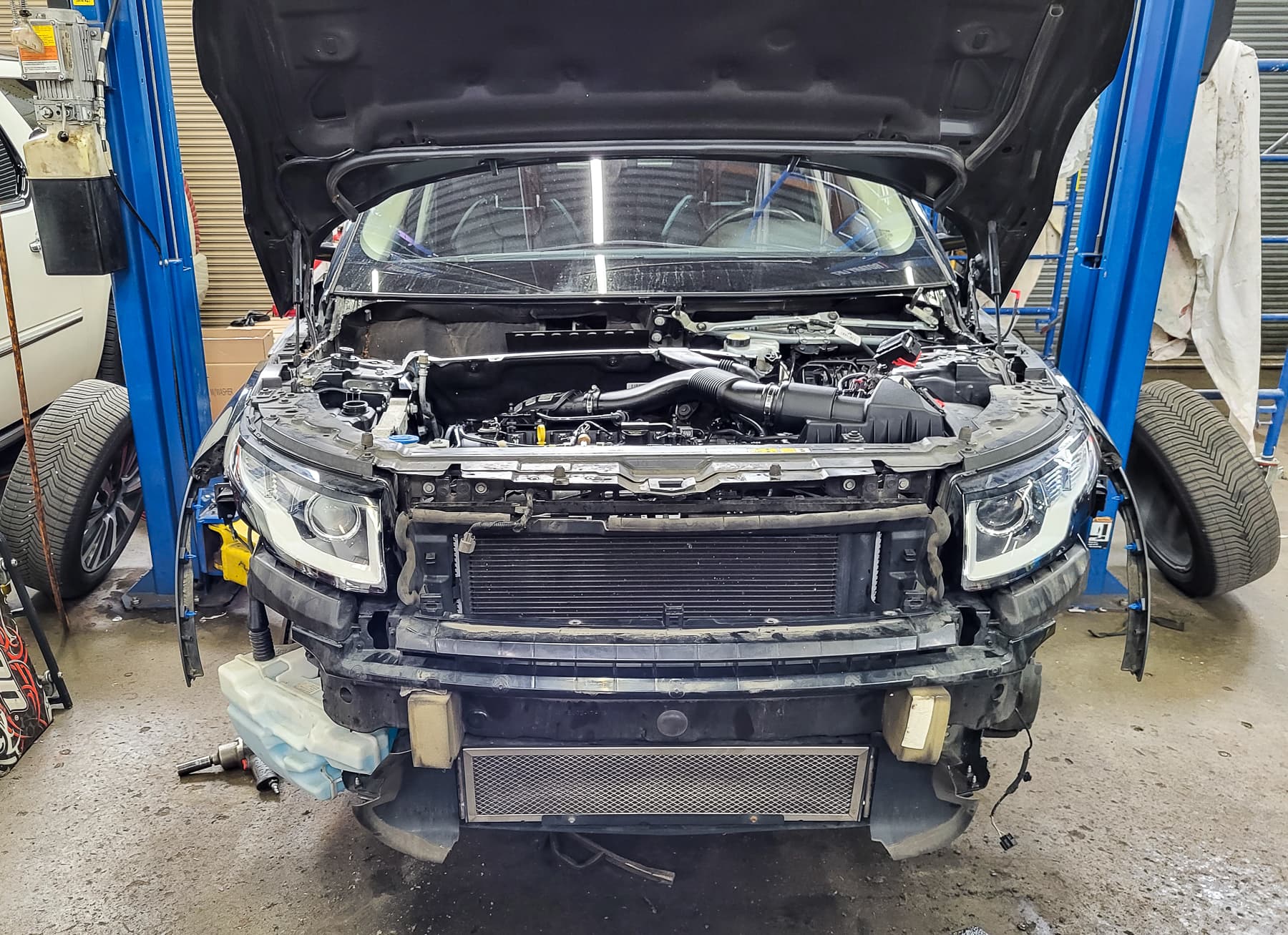 This is the intercooler for the turbocharger. So all these items need to be removed to take this radiator out. It's not like the old days where the radiators was just kind of plunked in as a separate item. Most of these things are interconnected, tied together, especially the evaporator and the radiator. It's easier for that manufacturer just kind of bolt it all together as one piece and then unbolt it later. So there's one front end view. 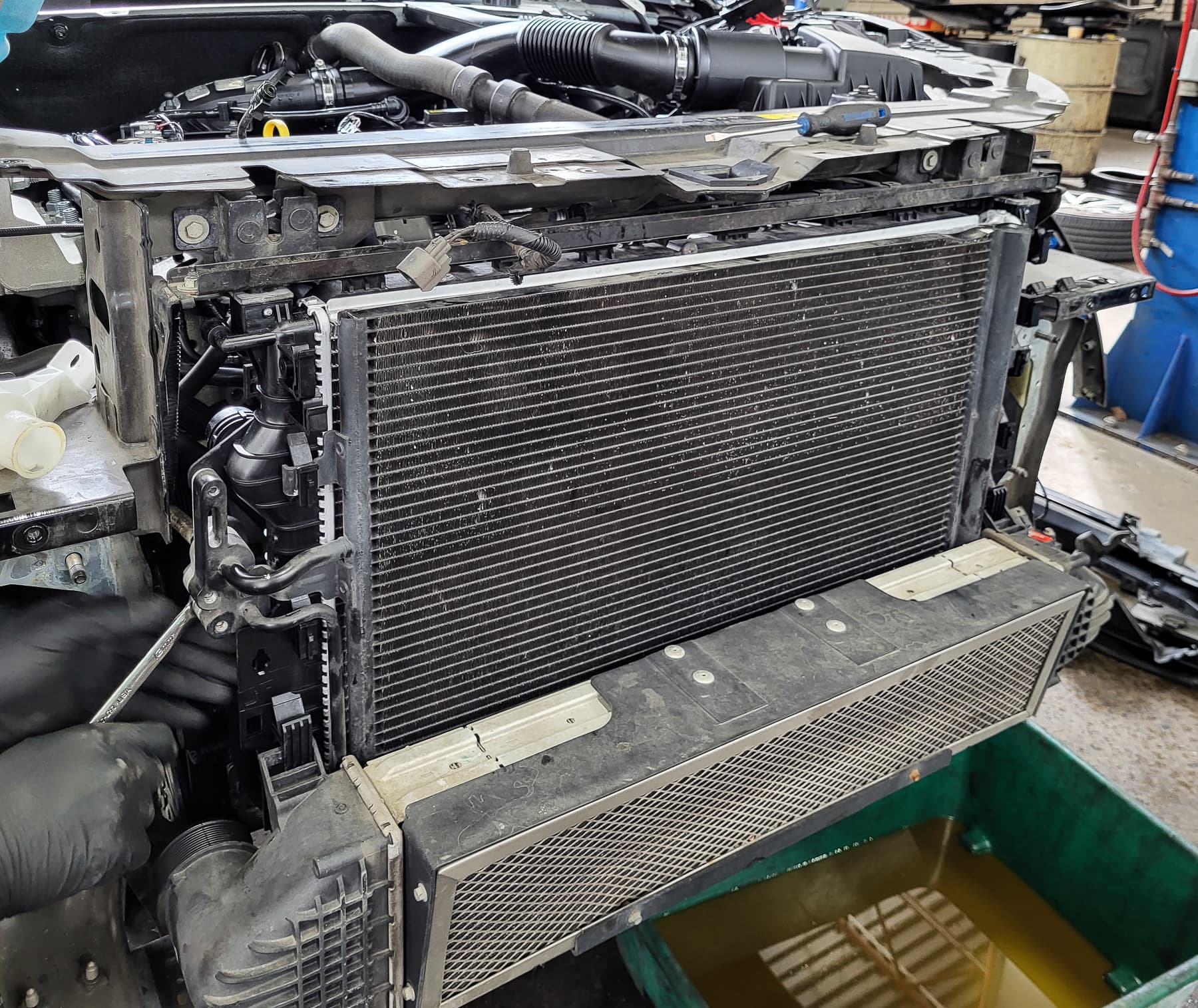 Here's another one with more components off. Again, there's the AC evaporator here and the radiator sits in behind here so, this is the intercooler once again, so a few more items removed. 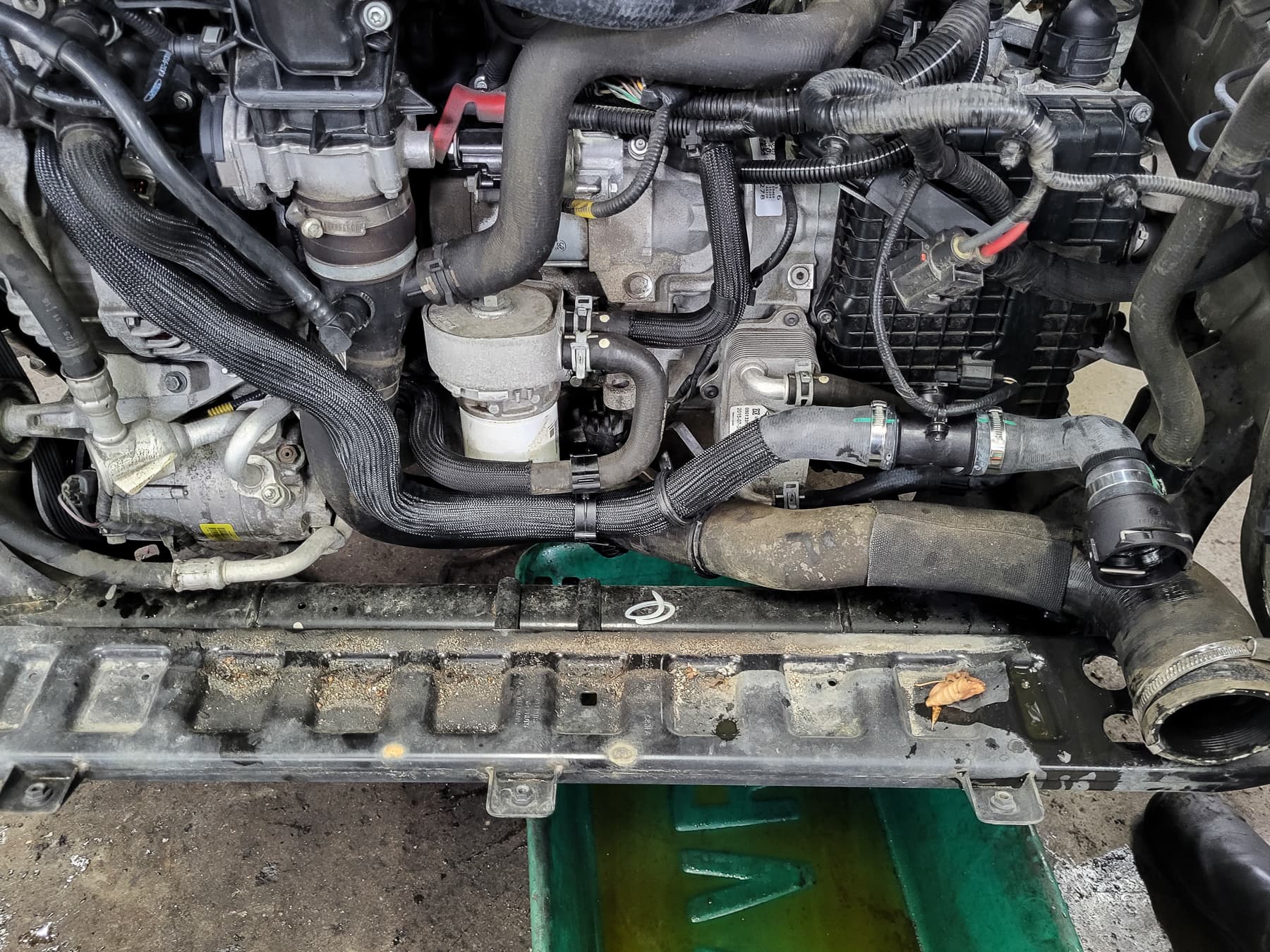 So this is what's involved in removing it. And this is what the radiator assembly and everything out of the vehicle. So we were actually looking here at the front of the engine, the transmission over here. You can see this is either transmission cooler, an engine oil cooler located here.

Amazing you know, some vehicles you look at how many radiators there are these days for, you know, to keep things cool and at the right operating temperature. So air conditioning compressor here, by the way. So one of the other items we did replace radiator hoses while we're at it, because it's so easy to do them while the radiators out very difficult to do in the radiators in place. So obvious things to do while the service is taking place.

And sometimes one thing that causes hoses to fail, a lot of times, it's not the hose that wears out, but if you look at this item, it's got a coupler here with a quick connect, there's rubber O-rings in there, then a plastic piece that attaches to a piece of rubber, attaches to another plastic piece, to another piece of rubber. There are numerous clamps, numerous places for these to leak. So it just makes sense to just do it while you have it apart. And often we find we clip it back together and then the O-ring leaks, and a lot of times the O-rings are only serviced with the whole hose.

So it makes everything more expensive, but once it's done and done right, it doesn't have any problem again. So that's basically the radiator end of it.

Mark: What about the heater hoses?

Bernie: Heater hoses, I don't have any pictures to show you other than what we can have a look at this sort of a view here, but the heater hoses are located back in this area here. So it means you were on a mouse pointer, swirling around, heater hoses are located back here. So this is a completely separate job really. The only thing they kind of share in common is you have to drain the coolant and refill the cooling system. This is the linkage for the windshield wipers.

We've already removed the Cal coverings and things in the back here. So these things need to be removed to access the heater hoses. And there's a whole array of them in the back here. It's quite an assembly. Again, I didn't take any pictures of that, but it's a huge amount of work doing that job alone.

So this vehicle kind of had everything from front and back. And even with that all done, we still didn't replace every hose on the vehicle. We just replaced the hoses in this area here that were leaking.

Mark: So the heater hoses are going through the firewall, essentially from the engine compartment and the heat of the engine and transferring that hot liquid into the cabin where we sit and you can use it for heating or for cooling at that point. Is that right?

Bernie: Except the heating system has only a heating system. So the air conditioning transfers its own heat with its own set of pipes. And actually I'm assuming that a lot of our EVs, you know, use a common condenser that'll switch over from one to the other. I have a heating system at the back of my shop. There's a fan thing. If you can see at the very top, just above my head where I'm pointing, that is a heater and air conditioner. And it just basically switches from one to the other, depending on which way the valving works. Pretty simple. I think a lot of EVs have gone to that route, which is much more efficient. So there's just one system to do everything. But we're dealing with internal combustion engines here and extra complexity, so. We've been getting used to it. It's getting more and more complex as the days go by. So I don't know if that answered your question. I think a long windedly answered your question.

Mark: So this is a fairly new vehicle, and I know there's been some evolvement, I guess, in the refrigerants used. Does this one use the new refrigerant?

Bernie: It does. And actually we can just get into a couple other pictures here. I was actually going to show you the radiator leak. I realize I forgot to show that. 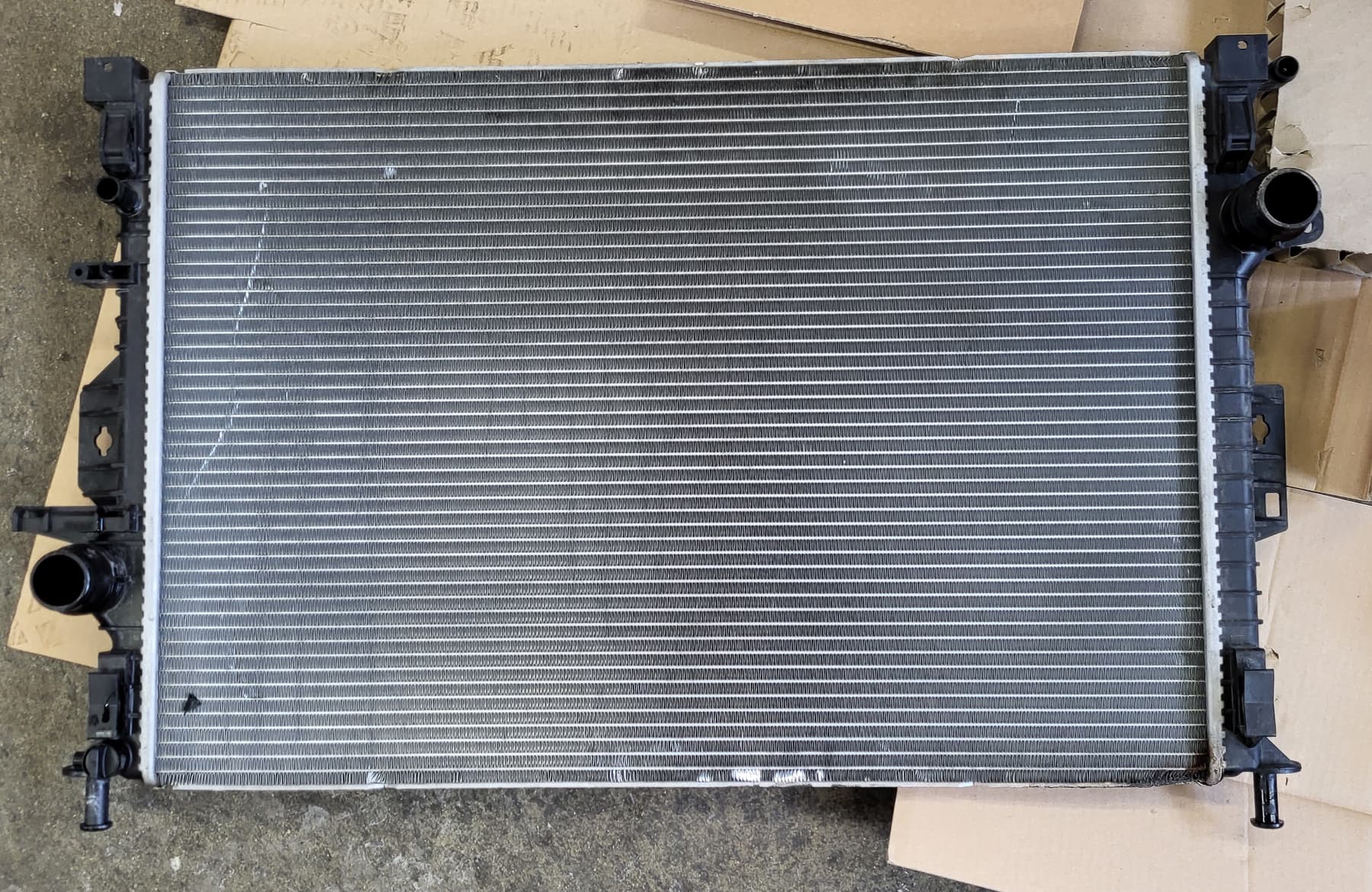 So here's the old radiator sitting out on the ground. The leak was right in the bottom corner here and you can't really see it so well in this picture. But you have a closer up view, right there. 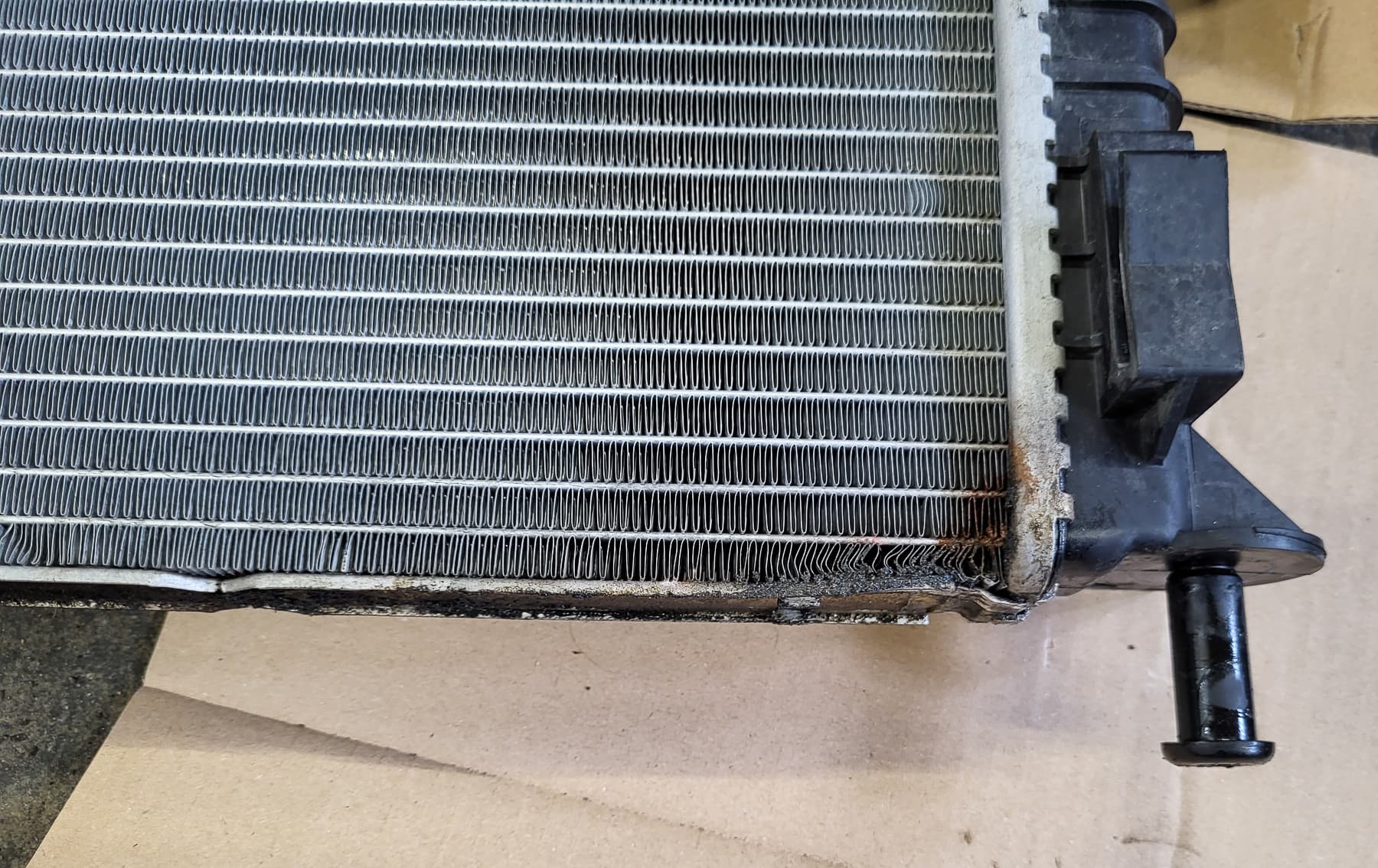 And you can see this sort of rusty staining around here. It almost looks like the radiator may have been hit, it looks a little damaged here. So it's possible, sometimes vehicles get in small accidents and that weakens things. It's difficult to know, but it may just be, it's just deteriorated from age.

But yeah, as you said, it's a 2016. It's not that old of a vehicle. 80,000 kilometres. So really a little disappointing that it's worn out so soon. As for the air conditioning refrigerant, yes, this vehicle uses the new refrigerants R1234YF as opposed to R134A. It's a different chemical. Requires a different procedure.

Here's a couple of pictures, this is the actually refrigerant and the bottle. We refill it. We have a machine for R134. We actually have a one piece of machine that evacuates, recharges, does everything. With this refrigerant, with the equipment we have, we do it sort of with separate equipment, special evacuation equipment, and then recharging it with a separate item. 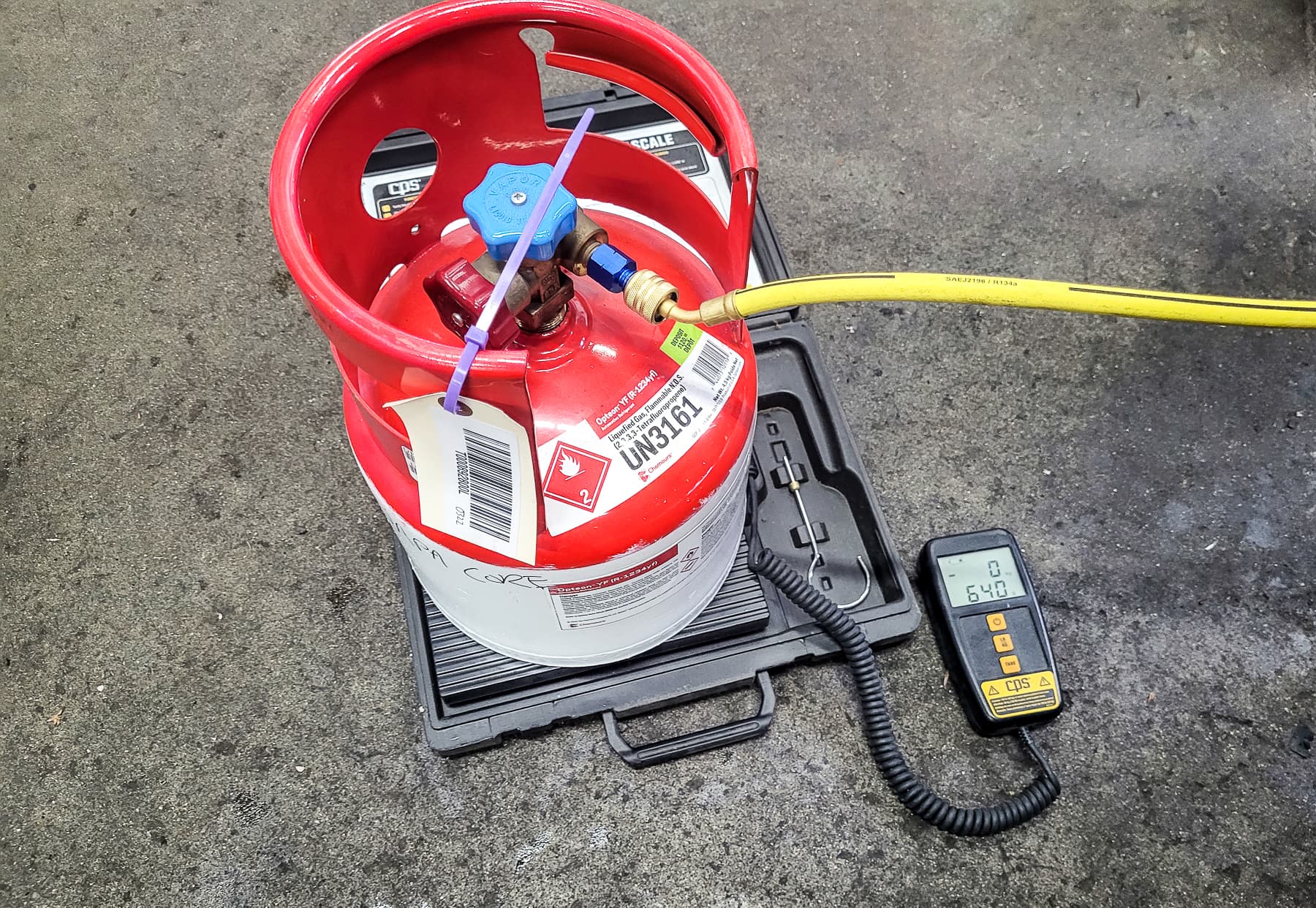 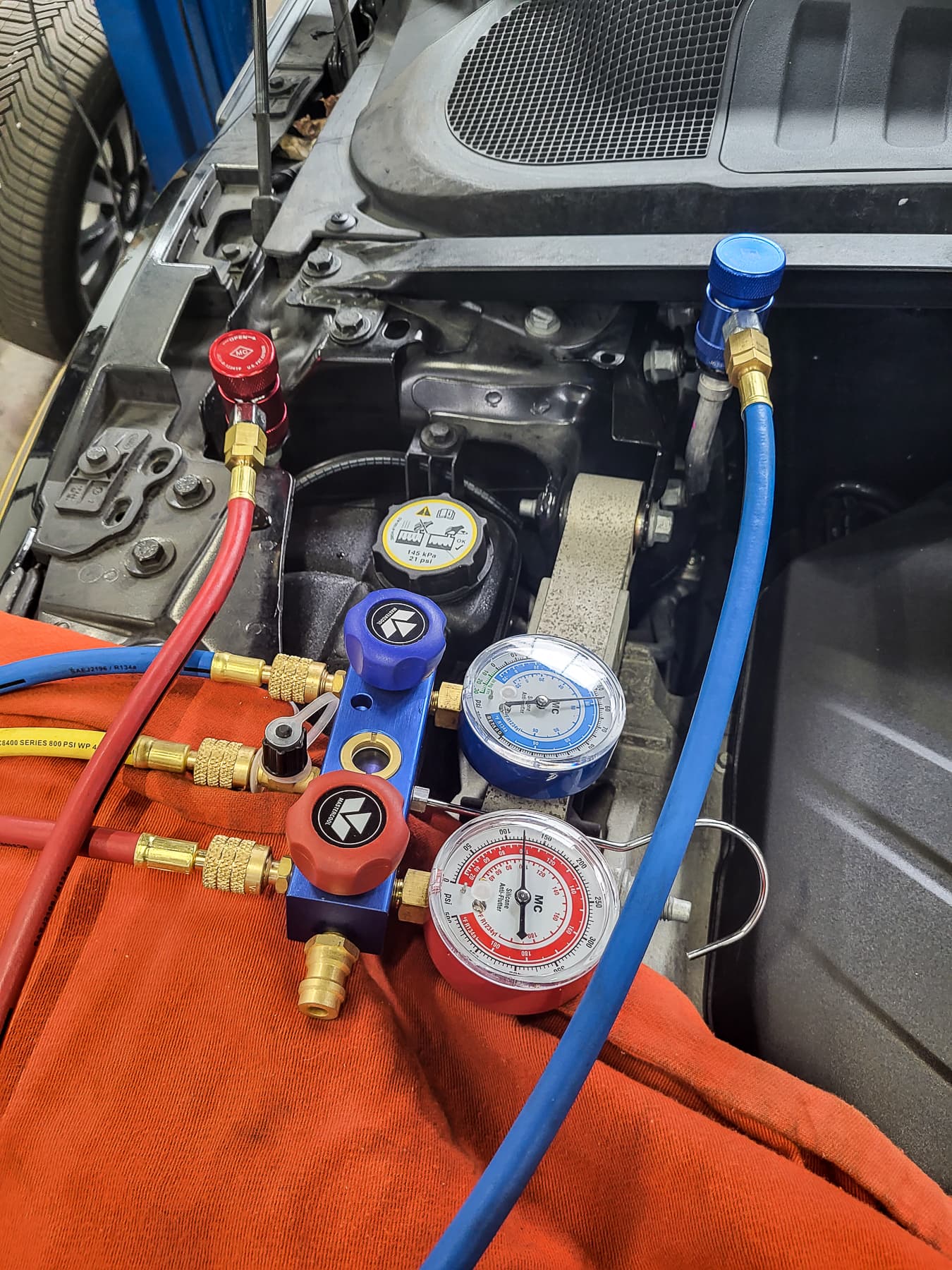 Still achieves the same thing. It's just a little less costly way to get into the program. This refrigerant is very expensive. It's very environmentally friendly, which is why we have it. R134 solved the issue of the ozone depletion from R12. But R134A still creates global warming. It's not great in that area, but R1234YF is very good in that aspect, so that's why this refrigerant is being used. You wouldn't want to breathe it, of course, but it doesn't create the environmental damage that previous air conditioning refrigerants have done.

Mark: So, this looks like it was a huge amount of work. So I imagine that was a large bill.

Bernie: Yeah. It was a lot of work. We have two jobs all at the same time on a car that's what, 5, 6 years old. It's a little too soon I think. I mean, if I was the owner, I'd be disappointed having a vehicle at six years old that needed this level of work. But, you know, it's what it is.

Mark: How are these Range Rover Evoques for reliability, other than this one?

Bernie: We do. We do maintenance service too, preventative maintenance.

Mark: Which is even more important with your Range Rover. Keep it running well, and don't worry about it. The guys to see are Pawlik Automotive. You can book online at pawlikautomotive.com or you can call them (604) 327-7112 to book your appointment. You have to call or book ahead. They're always busy. You can check out the website at pawlikautomotive.com, literally close to a thousand of these, of videos with the transcripts if you want to just read, rather than watch us blather on. Kind of fun sometimes to watch us, because you never know what's going to happen. Or you can check us out on YouTube. Pawlik Auto Repair. Same story, 10 years plus, we've been doing this now with all makes and models and types of repairs. Thank you very much for watching and listening. We really appreciate it. And thank you Bernie.

Bernie: Thank you, Mark. And thank you for watching.