Mark: Hi, it's Mark from TLR. I'm here with Bernie Pawlik, Pawlik Automotive in Vancouver. Vancouver's best auto service experience. And I can say that because they've won best in Vancouver, 24 times as voted by their customers. The best place to get your car fixed in Vancouver, BC, Canada, we're talking cars. How are you doing Bernie?

Bernie: Doing very well. I have to ask you a question though, before we talk. I just make a comment. I love your background. You're a little colour changing. That's pretty cool.

Mark: So Subaru Legacy 2016. What was going on with this vehicle?

Bernie: Yeah. So this vehicle is a regular client of ours came to our shop for a B service and just a refresher on the B service. If you watch our podcast, it's basically an oil and filter change along with a very detailed inspection. Something you should probably do on a yearly basis on any car that's more than a couple of years old. And you know, we look at the brakes, the steering suspension, all the fluids in great detail. It's a thorough inspection. Test the battery, charging system, cooling system. Preventative maintenance is what it's all about and safety.

Mark: So is an older Subaru at this point in time, eight years old. So anything special about this older model of Subaru?

Bernie: Well, this is a 3.6R version. So this is the six cylinder version. It's a flat six, kind of like a Porsche, I guess, not quite as sporty, but it's an awesome car. I mean, these are really nice vehicles. Well-built, nice interiors, probably not quite up to a Lexus quality, but you know, it's a pretty nice car. Great performance, good horsepower.

Mark: So did you find anything that the car needed from doing the B service?

Bernie: The only thing we found at this point was that the rear brakes needed to be done. They're not fully worn out, but close enough that the pads and rotors were such that they needed to be replaced.

So, let’s look at a few pictures of the car and the brake job, and we can discuss that in some detail. So there's the Legacy. Again, this is not an Outback or an off-road model. This is a sedan, but a very nice one. 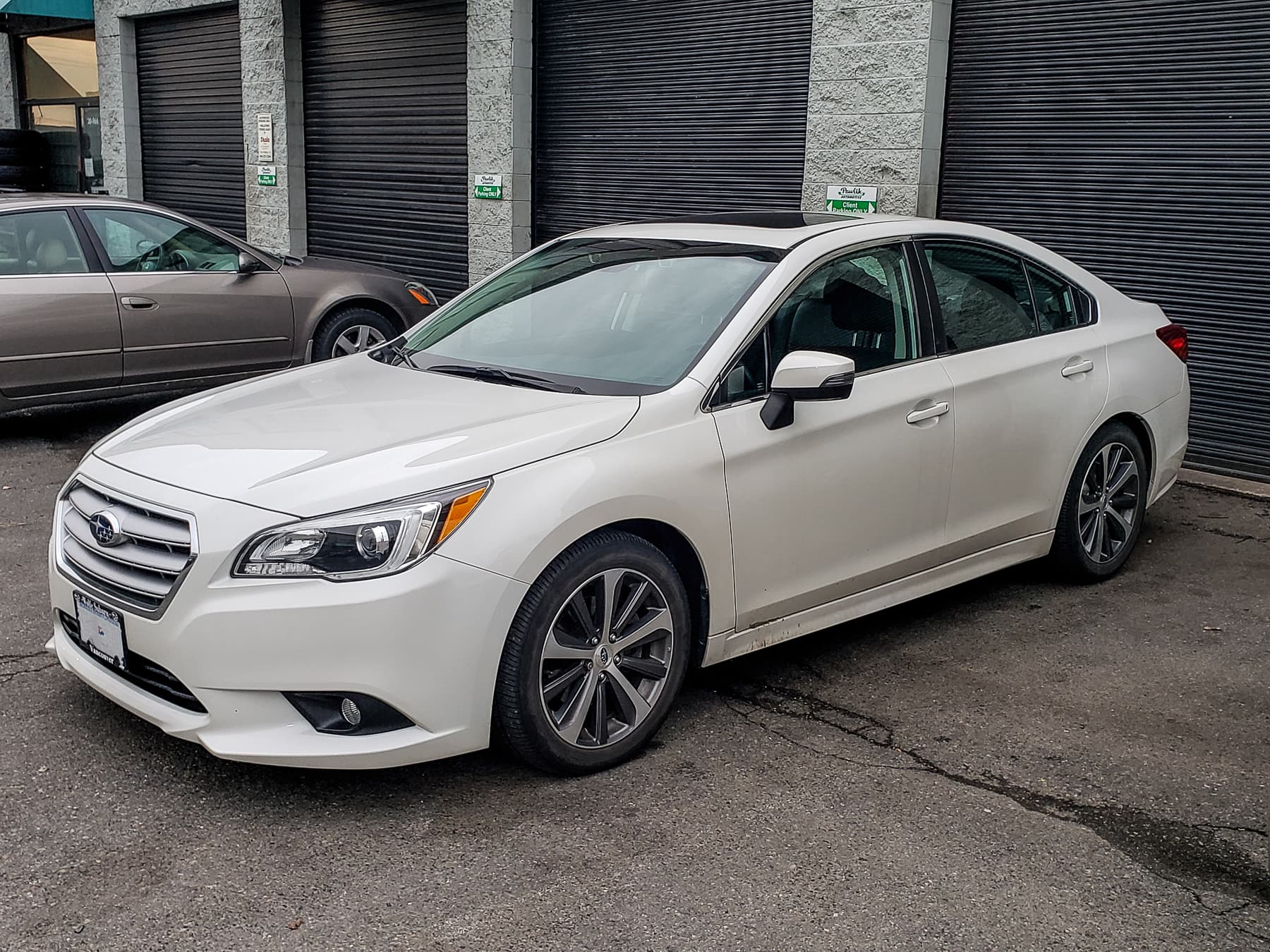 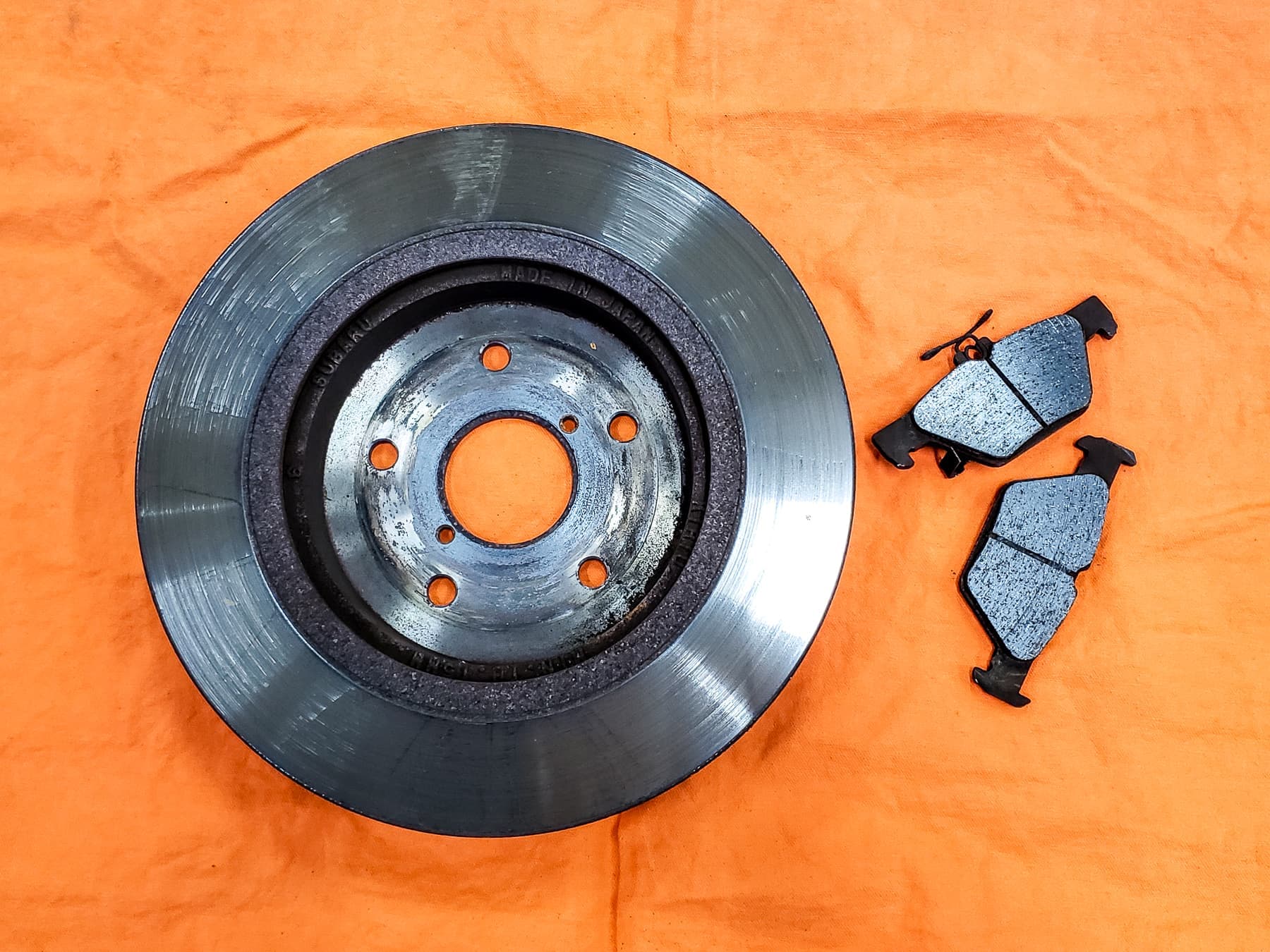 The other thing that's a little unique about the brakes in this Subaru, this is a modification that you know, it's kinda modernize these cars, is that the rear brakes used to have a separate parking brake shoes. So inside this area where my mouse is kind of swirling around here, it was actually a brake drum and there would be brake shoes on the backing plate. This is a picture of the brake caliper, I don't have a view of it, but basically it was a parking brake was a separate mechanism. So on this vehicle, they now incorporate the parking brake into the brake caliper. And it's an electric brake caliber. 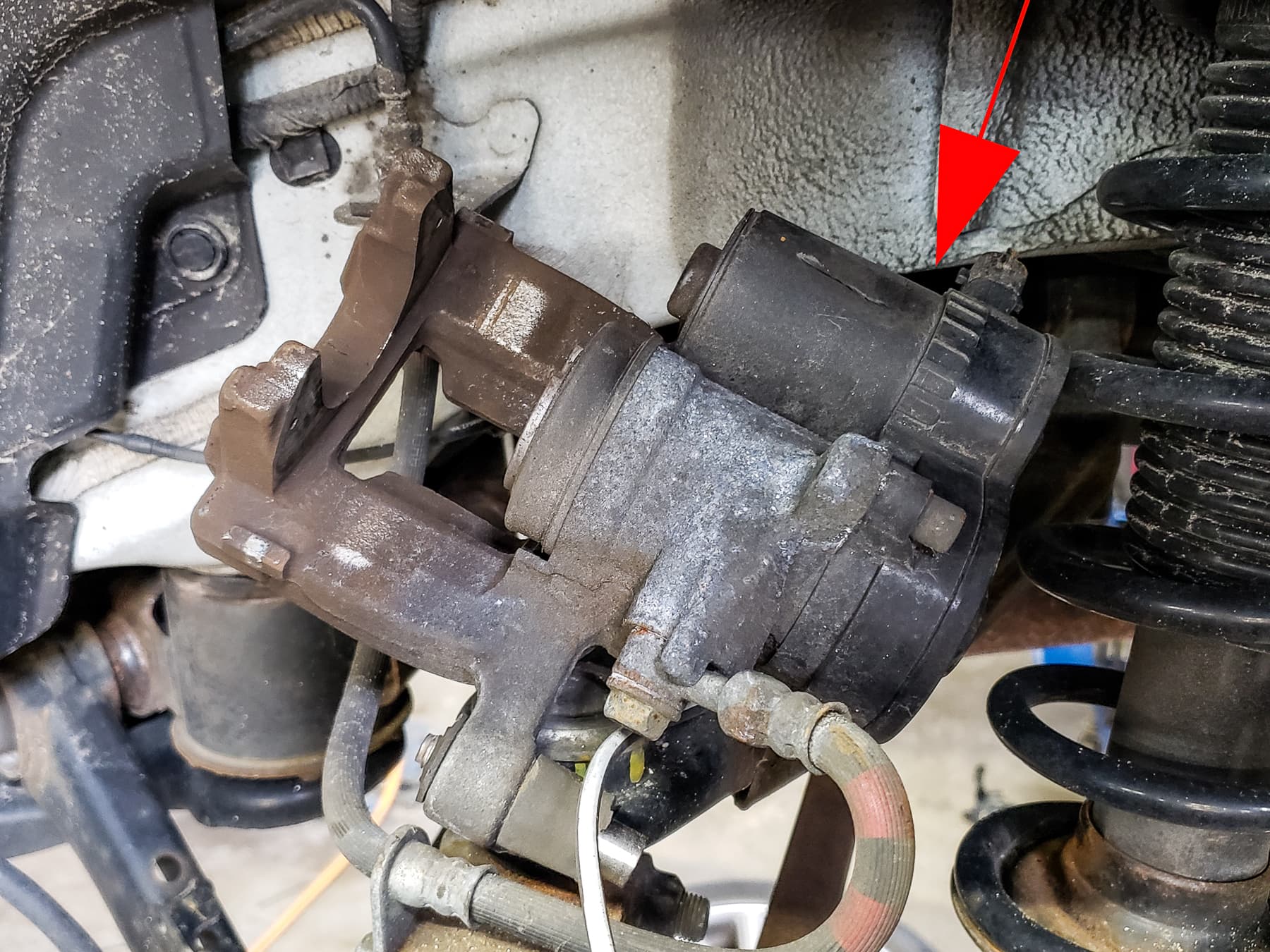 So there's some extra service involved in doing this. You know, first, I mean the good news is the brake shoes are eliminated. They don't always cause a problem, but sometimes it does add an extra service, but to actually do the brakes on these with the electric parking brake involves a couple of things, either removing this actuator where the red arrow is pointing. Removing it and then retracting the caliper piston.

Or there's a way with a scan tool to actually retract the caliper piston. And it varies, you know, this is not the only vehicle that uses, this is a very common system and a lot of vehicles and so it depends on which make and model we're working on as to how we do that particular thing. But that is an added step that it takes a little extra time. 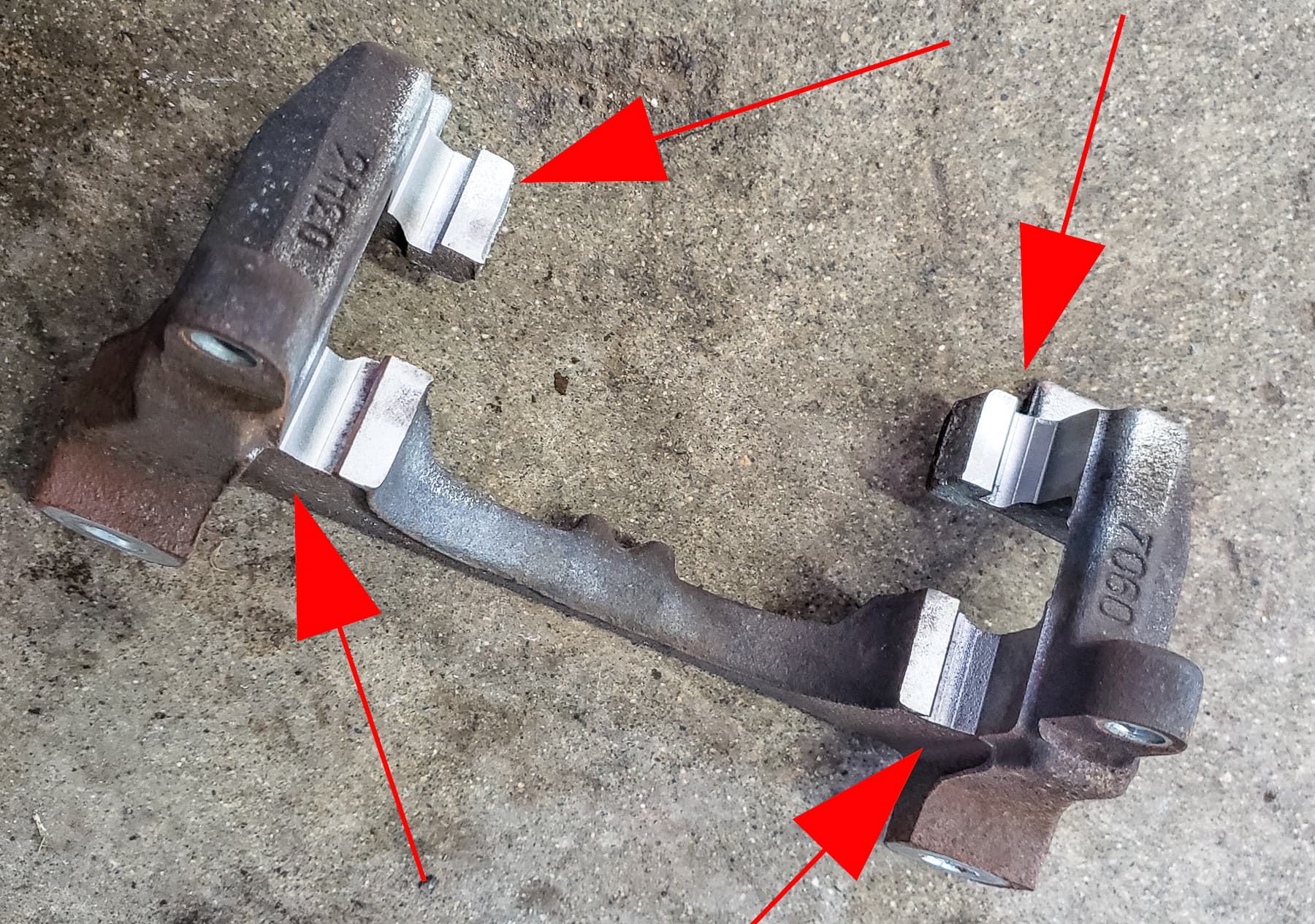 One area I want to talk about that we do with our brake jobs, little extra service that's involved as we clean the caliper bracket, unless we're actually replacing the caliper. We actually sandblast these caliper brackets. So I've taken the time to put all the arrows in these pictures, these are where the brake pads sit and ride. And it's very important that this is clean. Over time rust develops you know, kind of like what you have and the rest of it. And of course the brake pads don't slide very well when it's rusty like that.

So we clean that. We lubricate it. This is the extra touch I think we do at Pawlik Automotive that some shops do, some shops don't. But definitely the extra thing you can expect from us, the brakes will last a long time because of the time we put into it. I think that's the details on the brake job.

Mark: So what about the rotors? Do you just remove those and put new ones in?

Bernie: Well, we removed them, but you know, the extra step we take with that is to clean the corrosion off the wheel hub. Wheel hubs they develop some corrosion and, you know, while we could just take it off, put a rotor in if it's not too bad, it's best to clean it. So we have high speed wire wheels that we use to get into the hub and move all the corrosion that way it's like putting fresh metal on fresh metal. The risk of not doing so is, if there's any rust there, it can cause the rotor to warp or run not true. And that'll cause the brakes to, it can cause vibrations and issues like that. So, we want to make sure that doesn't happen. So that again is another thing that we do to make sure.

I mean, and the other thing is if you have something that's really bad, like really severe corrosion and you don't remove the rust, you have a little chunk of rust under there, you bolt everything up together the wheel could actually come loose. Because after a while of moving around, it kind of settles. And the wheel bolts weren't really as tight as they were supposed to be because you're crushing rust particles. So that's an extreme thing, but you know, it's something you want to prevent.

Mark: So, I guess the other part of the system that I know, I don't really think about or forget about is the brake fluid. What do you do with the brake fluid? Anything?

Bernie: Yeah, I mean, it's not necessary to do it with every brake job, but we usually every two to three years recommend flushing brake fluid. That's what most manufacturers recommend. And so in the case of this vehicle, we did actually do a brake fluid flush, which it was due.

We basically track that more over time. It's not just, oh, we did the brakes, let’s flush the brake fluid. It's a good time to do it while you do the brakes, if it's due. But if you're a regular client of ours, we track your maintenance and how often we've done things and when things are due. So things don't get over duplicated or over recommended, we can track things and make sure we do it at the right time.

Mark: Now, typically isn't it, the front brakes that are wearing first? Have those been more often changed in this vehicle and this was just the back catching up because of the mileage?

Bernie: Excellent question. So I don't know when we've done the front brakes. I didn't back look at the history of it, but you know, that used to be the case where front brakes would wear out much more often than rears, but what's happened in vehicles over, I'd say maybe a period of 10 years is brakes got a lot more sophisticated.

And what I think manufacturers have done is they actually, when you put the brakes on a lot of times, they'll actually add a little more brake to the rear. Just for stability of the vehicle. I mean, the rear brakes don't do nearly the amount of work the front brakes do to stop it, but it does create a more stable braking of the vehicle.

And so there are a lot of times where certain cars, and we noticed this with Volvos, maybe 10 or more years ago, the rear brakes would actually wear out faster than the fronts. And that is usually due to this kind of modulation of the brakes where you need to hit the brake pedal. And it'll give a little more rear brake first. It's all kind of, you know, happens all very fast. You wouldn't even feel it, but it makes for more stable braking. So to answer your question, I don't know whether this is, you know, how this compares to the front brakes, but a lot of times you'll find on cars, the rear brakes will actually wear faster than the fronts.

Mark: Interesting. So how are Subaru Legacy's for reliability?

Bernie: Excellent car, definitely a very good car. You know, these 3.6 engines have been around for a while. They're very reliable. We don't see any problems with them, which is a good thing because it's an extremely expensive engine to fix. They're not very common. Most parts are dealer only, or very difficult to find. So you really don't want stuff to go wrong with any Subaru six cylinder engine, because it's a very expensive engine to fix. But overall, very nice car, very well built. I think, you can get at least 10 good trouble-free years of a car like this and maybe, 15 or more. So good car.

Mark: So if you're looking for service for your Subaru in Vancouver, they service a lot of them four or five a week, it seems like. People to see are Pawlik Automotive. You can check out or book on their website, pawlikautomotive.com. There's hundreds, literally hundreds of videos, including many, many, many on Subarus over the last 10 years on the website or on the YouTube channel Pawlik Auto Repair. Or of course, if you want to book by phone, actually talk to somebody (604) 327-7112 in Vancouver. That's the people to call. Pawlik Automotive. Thanks Bernie.

Bernie: Thanks Mark. And thanks for watching and listening.