Mark: So a 2017 GMC Sierra, the lumbar support broke. What was going on with his vehicle?

Bernie: Yeah, so the owner had been, it's a work truck, he was sitting in his vehicle and I guess he needed to stretch out. So he pressed his legs rather hard on the floor, as he told me and pushed his back into the seat. And there's this pop. And after that, no lumbar support.

Mark: So which part broke?

Bernie: Well there's a unit on the back of the seat inside that creates a lumbar support. It's like, there's an electric motor and you can adjust it. So it pushes forward and back, you know, it's a nice truck. You know, these GMCs, they have different seat supports, side bolsters, lumbar supports and things. So basically a piece inside the seat that broke.

Mark: So why would that break? Shouldn't it be engineered to handle a lot of force?

Bernie: I would think so, but we're going to look at some pictures now and you can see the quality of this part is less than stellar. I assume they have some sort of criteria that they don't expect people that really stretch into it and push into it. But in my opinion probably should have been built a little better than it is. But let's have a look at some pictures.

So there's our 2017 GMC Elevation model pickup truck. And we'll get into the seat bolster here. There is the broken piece right there. We're looking at actually I'll do a wider view of this piece. 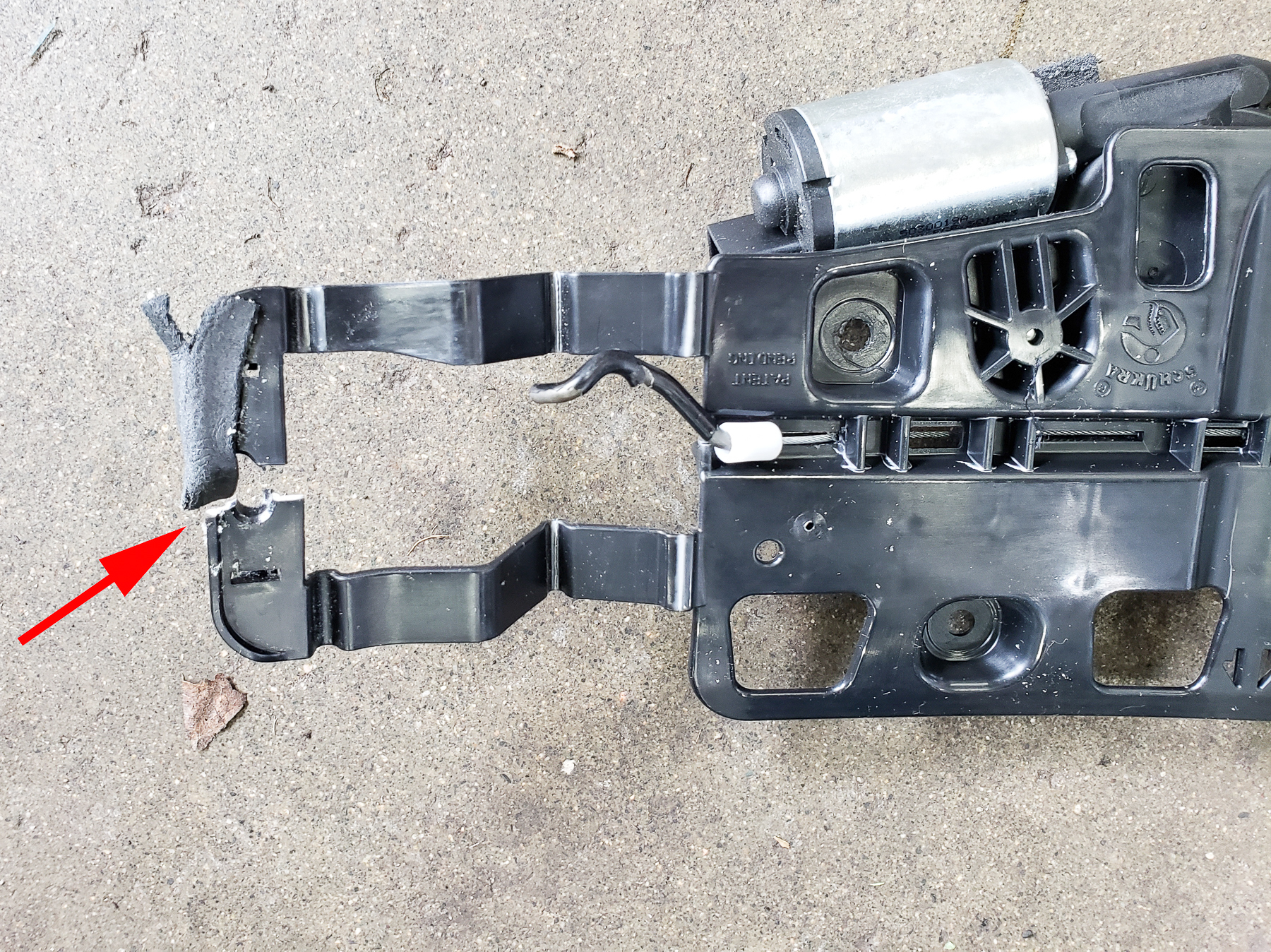 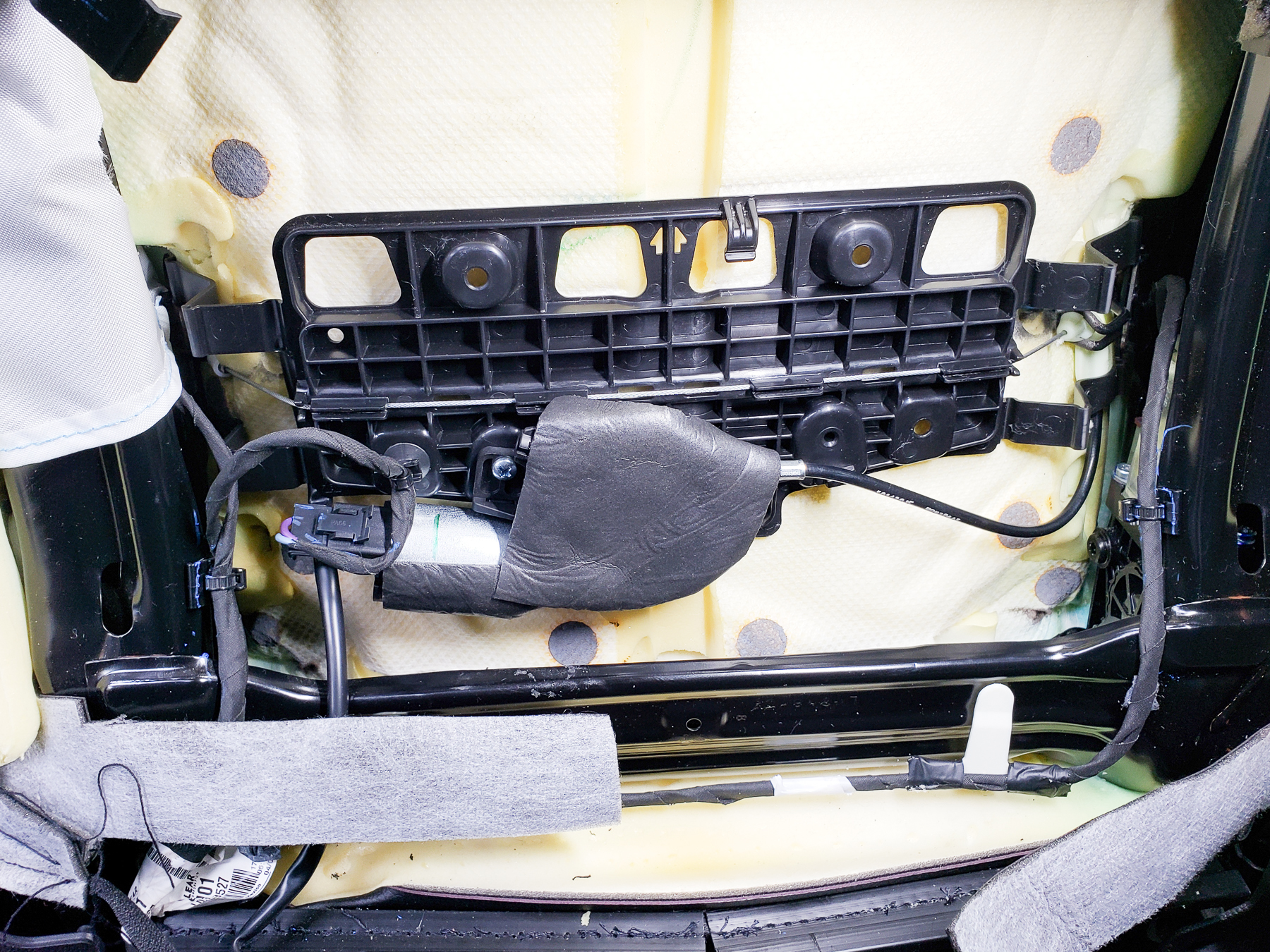 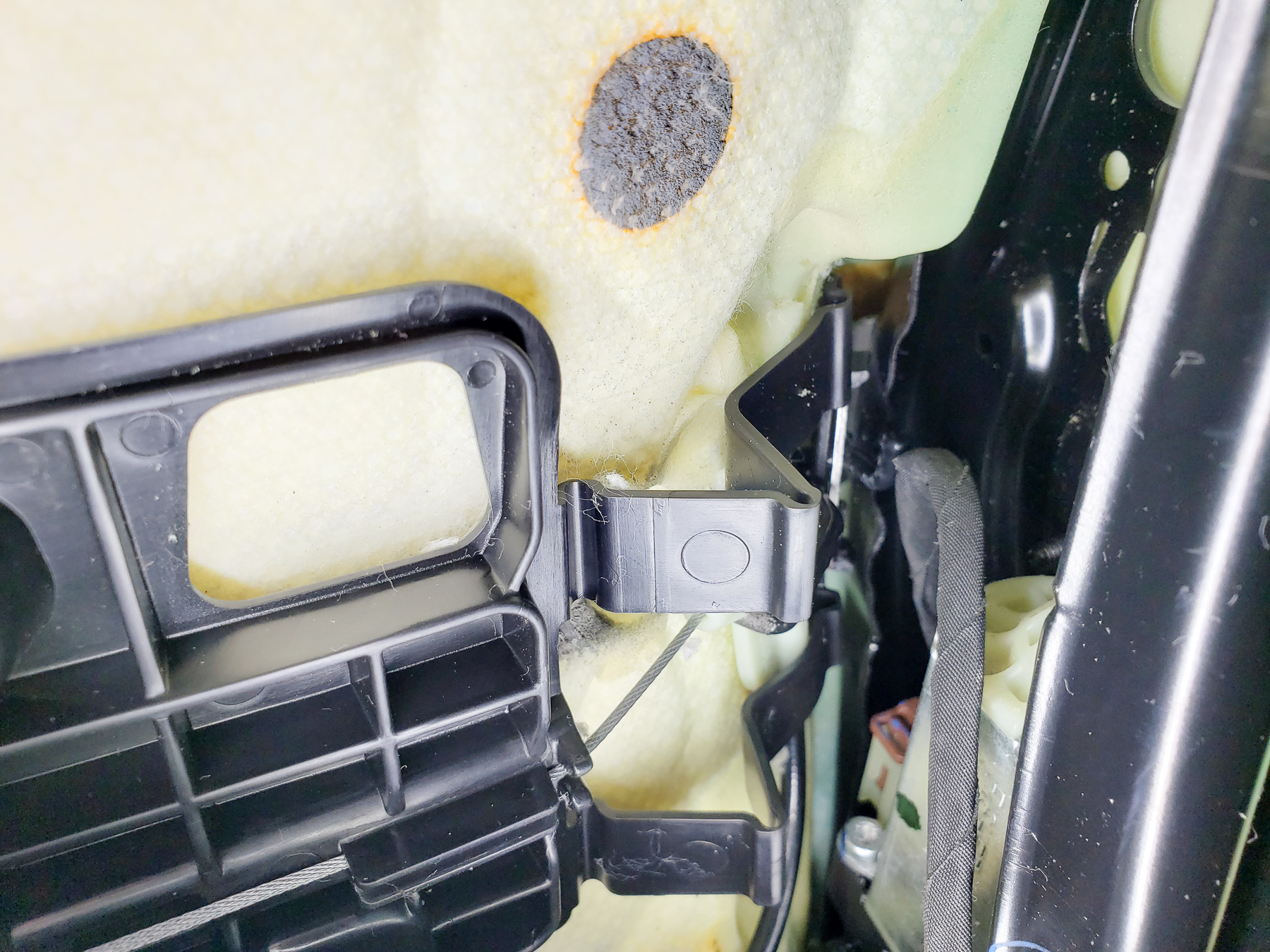 So this is the lumbar support fully removed from the vehicle, basically a long plastic pad, kind of hinged. And there's like electric motor that drives it. And some hooks in the end that kind of this whole assembly is kind of hooked into the seat mechanism. And this pushes against the seat, the back of the seat cushion, depending on whether there's a cable in the back we'll look at that. But you can see a little crack here and we'll look at our closeup again. This is the area that's cracked here. So you can see a cable here. This cable actually loops through a hole here, and that loops through a framework on the back of the seat. So that's basically what broke. As you can see, it's not very thick plastic. It's, it's pretty flimsy in fact. There's the lumbar support, the new one installed. It basically as I say clips into the back, you know, inside the frame of the seat here. There's the electric motor with cables and the wiring connectors.

The other closeup view of where the seat. This is again, you can see this sort of hinged piece here. Depending on which way the cable pulls it'll pull it tighter or looser, depending on how you want to adjust your lumbar. There's our picture show.

Mark: So obviously you could just replace the part. You didn't have to replace the whole seat, which is better. But you have to take the seat out of the truck.

Bernie: No, you don't actually have to take the seat out. Fortunately, they've actually made it a fairly easy repair. I mean, as far as seat repairs go, you can remove the backing of the seat. Like there's a, you know, a cloth pad or a pad of sorts at the back of the seat, we remove that part. And then, then the lumbar support is pretty accessible inside there. So it's just a matter of, you know, unclipping things, taking it apart. And then, it's fiddly to put it all back together, as a lot of seat components are, but put it all back together. It was actually, it didn't require the seat removal, which is good. I mean, as far as seat repairs, that was probably one of the simpler things you could do.

Mark: This is a crew cab pickup. I don't remember the picture.

Mark: So that would make it a little bit easier to get access to that front seat.

Mark: So, this is the question actually popped into my head. This truck's only three years old, wasn't this a warranty item?

Bernie: No, the warranty had expired. I mean, and this is a question we ask our customers, you know, when you have a vehicle that's fairly new we say, isn't that covered under warranty and they say no, it expired. So, you know, it's a work truck. He uses it a lot. It's got a fair amount of mileage on it and it either expired by mileage or age. I'm not sure which one, but it was beyond warranty.

Mark: So this is a unique circumstance, but is this a common issue with this part?

Bernie: Well, I can say that this is the first lumbar support we've replaced in our shop and maybe the last. I don't know. It's not very necessarily a very common repair for us, but what I will say is that when we went to order the part from the GM dealer, it was readily available in quantity at their local warehouse. So that tells me that this is a part that breaks a lot because you know, things that don't break. They don't stock. Maybe they'd have one of them. So you know, that's always a sure sign for us sometimes when we have a repair where we're not exactly sure what it is or what's happened. Yeah. We've got lots of those in stock. That means that it's a common failure problem. So the key takeaway from this one is, you know, don't press too hard on your lumbar support because it might break.

Mark: So GMC trucks have been quite reliable. Have a reputation for being reliable and have actually been reliable for many years. How has this 2017 model?

Bernie: It's good. You know, again, it's not too old, but it uses a lot of the same engines that have they've used for a while. Same drive train components. So, you know, I say ever since around the year 2000, I've been pretty happy with GM trucks. I think overall they're a well-made products. You can count on them. They're good. Things do go wrong. You know, this lumbar support, as I said, isn't the most robustly built piece, but, you know, had he not stretched hard, you know, it may well have lasted for many more years. So overall I'd recommend a GMC truck. I think they're good.

Mark: So there you go. If you need lumbar support replacements in Vancouver, or you need service for your GMC vehicles, the guys to see are Pawlik Automotive. You can reach them at (604) 327-7112 to book your appointment. You have to call and book ahead, they're always busy. Check out the website, pawlikautomotive.com or our YouTube channel Pawlik Auto Repair. There's hundreds of posts, videos, and blog posts, et cetera on all makes and models of vehicles and repairs. If you're enjoying the podcast, leave us a review. We'd appreciate it. And thanks Bernie.