Mark: Hi, it's Mark from Remarkable Speaking. I'm here with Mr. Bernie Pawlik, Pawlik Automotive in Vancouver. Vancouver's best auto service experience, many time winners of Best Auto Repair in Vancouver, as voted by their customers. And boy do we have a journey today we're gonna talk about a 2017 Jaguar F-Pace, 2L diesel. How you doing Bernie?

Mark: So what was going on with this Jag?

Bernie: Well, a lot of things. We're gonna talk about replacing the diesel particulate filter today, but that wasn't the first reason the car came in. Essentially there was a warning light on the dash, I'm trying to think of the words exactly, but basically, it was something to the effect of diesel exhaust fluid contaminated. And then what happens is a timer comes on, you've gone only got certain number of kilometres to drive before the vehicle won't restart. Which is a scary thing when you're driving a car. It's like, you know, 200 kilometres won't restart.

So, I'm not gonna talk too much about the service we did on that. We actually eventually got that issue fixed at least, so we thought. We got that issue fixed and then the check engine light remained on and we looked at a few things. There was a list of like 10 trouble codes and I spent a lot of time, like hours road testing and trying to just decipher Okay, which issue is which?

Finally came to the conclusion, let's have a look at the diesel particulate filter, because that seemed to be the next sort of thing we needed to look at. And what I will say too, usually if a particulate filter's bad, the engine will often have performance issues, but this thing performed really well. I mean, it's got lots of power. Peppy, nice to drive for sure.

Anyways, so we pulled the particulate filter out and found that it actually had melted down inside, which is kind of interesting. And I think I'm actually jumping a little too far ahead in our story here. But that's basically what we found. So that was kind of where we've gone with this.

Mark: So if you've got some pictures, how difficult is it to replace this DPF?

Bernie: Well, this one's actually not too bad. Let's have a look at some pictures. So this is the view of the engine compartment with the plastic engine cover on. 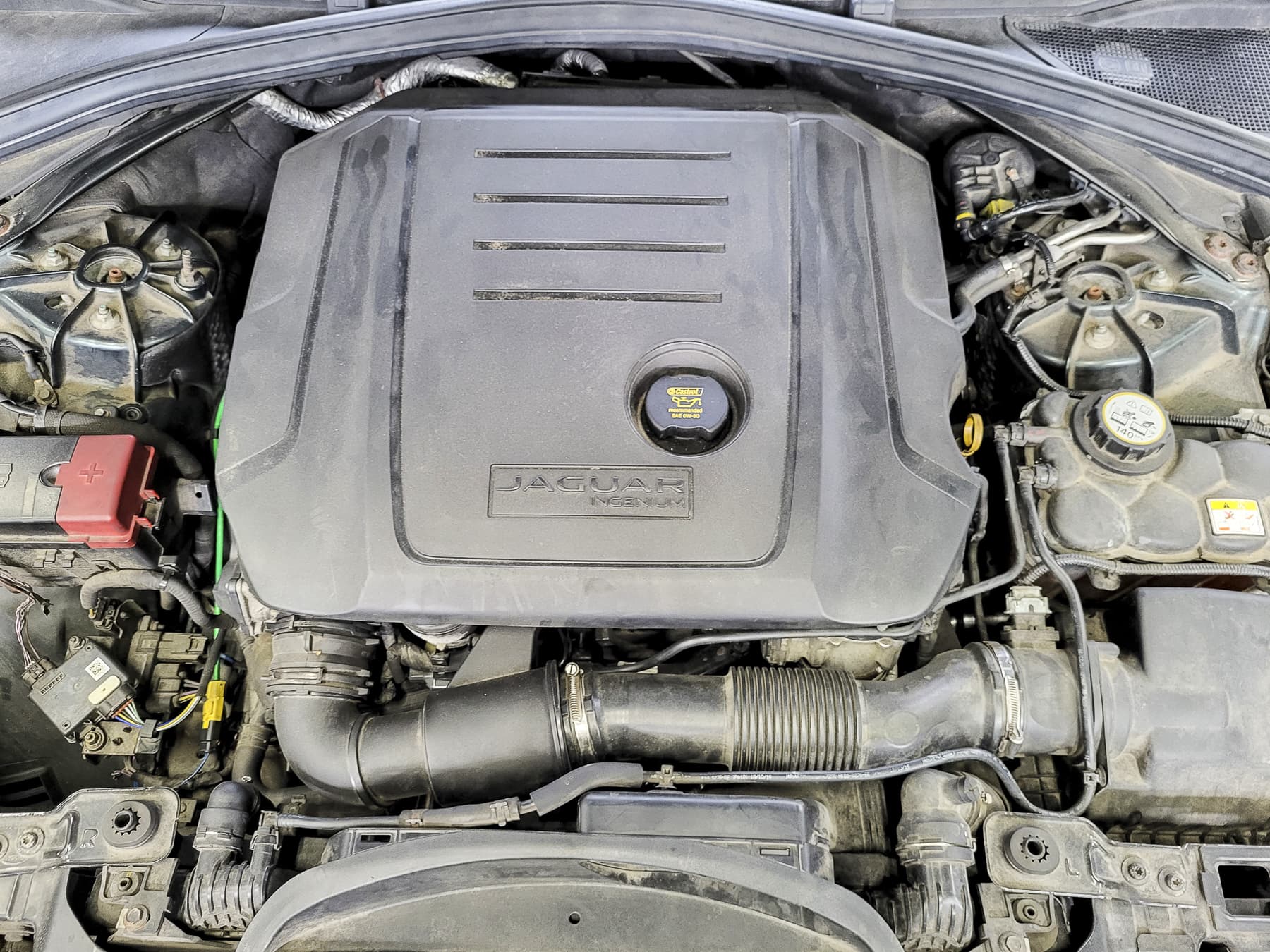 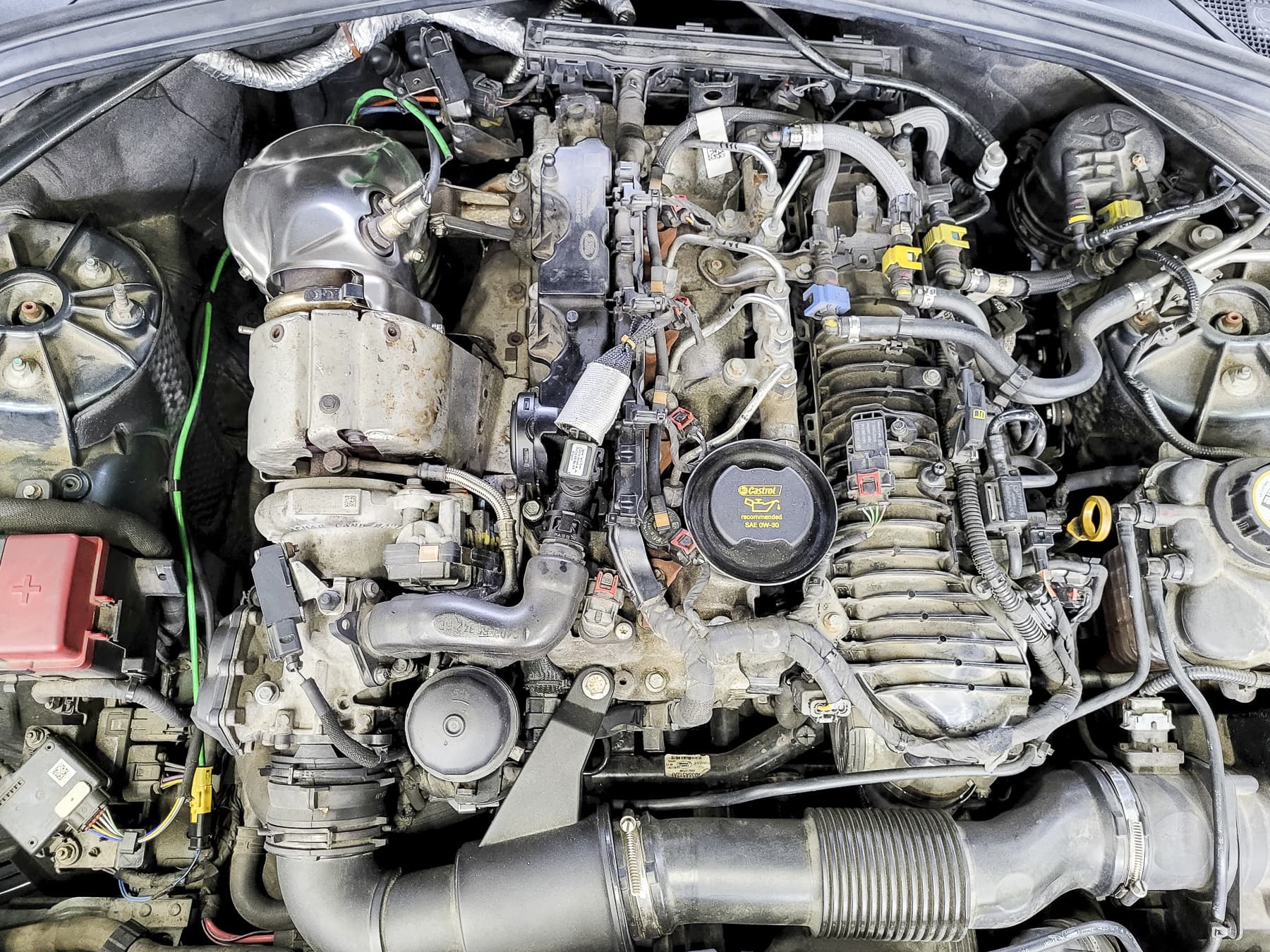 Anyways, turbo charger and exhaust system sits over here and there's the diesel particulate filter right there. Top mountings accessible. There's sensors. It's actually quite easy to get in and out of this vehicle. So that's the good news. And not crammed in like some that we've done that are absolute complete nightmare.

This is a view of the old filter. There's some tin covers around it, metal shields that obviously keep the heat from, thing gets very hot, keeps the heat contained. And that's the view of the old particulate filter with the shields off. This is a view with the shields resting on top. Again, you can see, and there's a number of sensors these pipes go to pressure sensor. There's a lot of oxygen sensors, various sensors bolt into these things. It's complicated. But the neat thing to see is, and actually I should say this is the new unit. You can see it's very much shinier than the old one. So let's have a look inside. 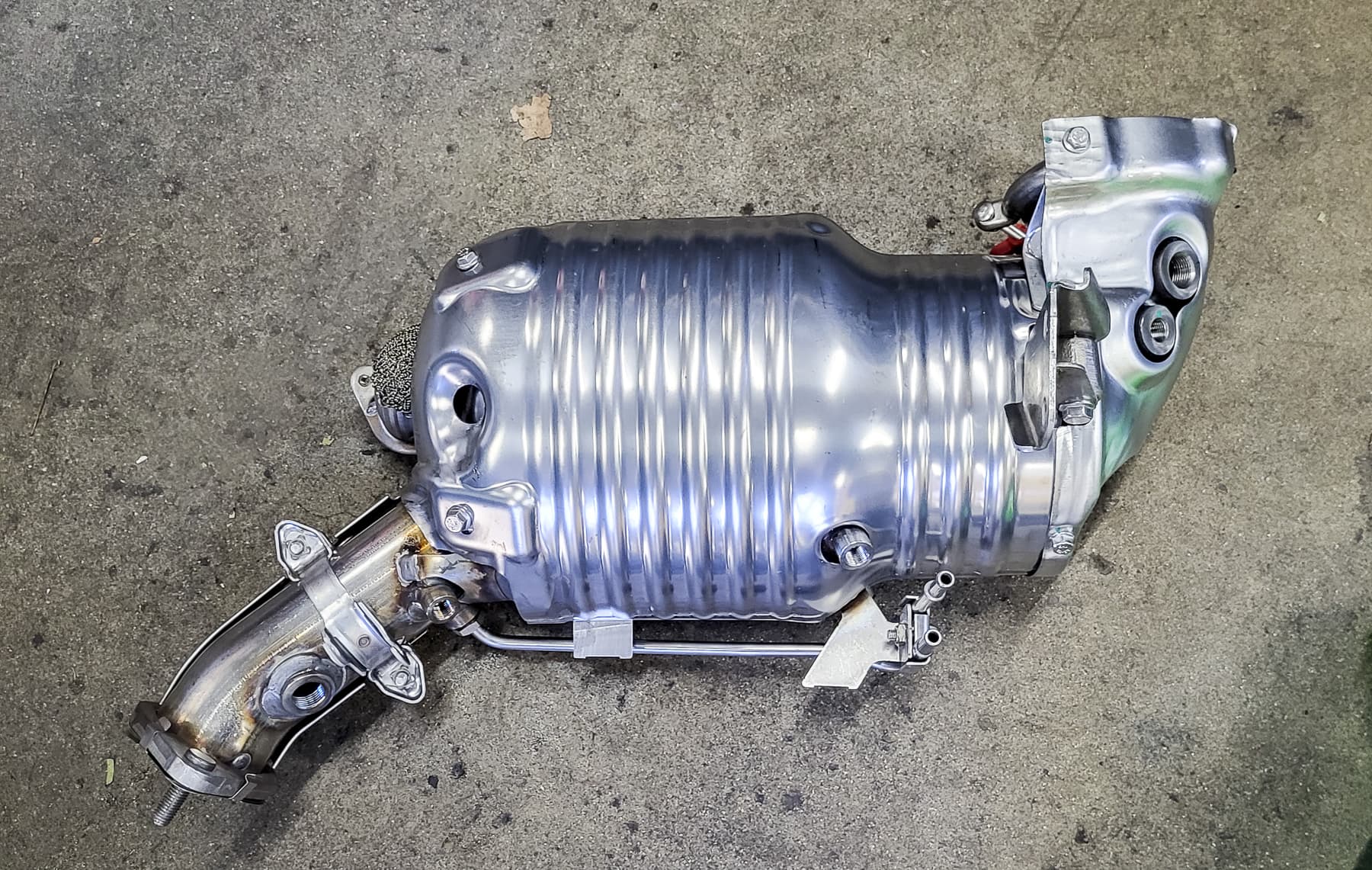 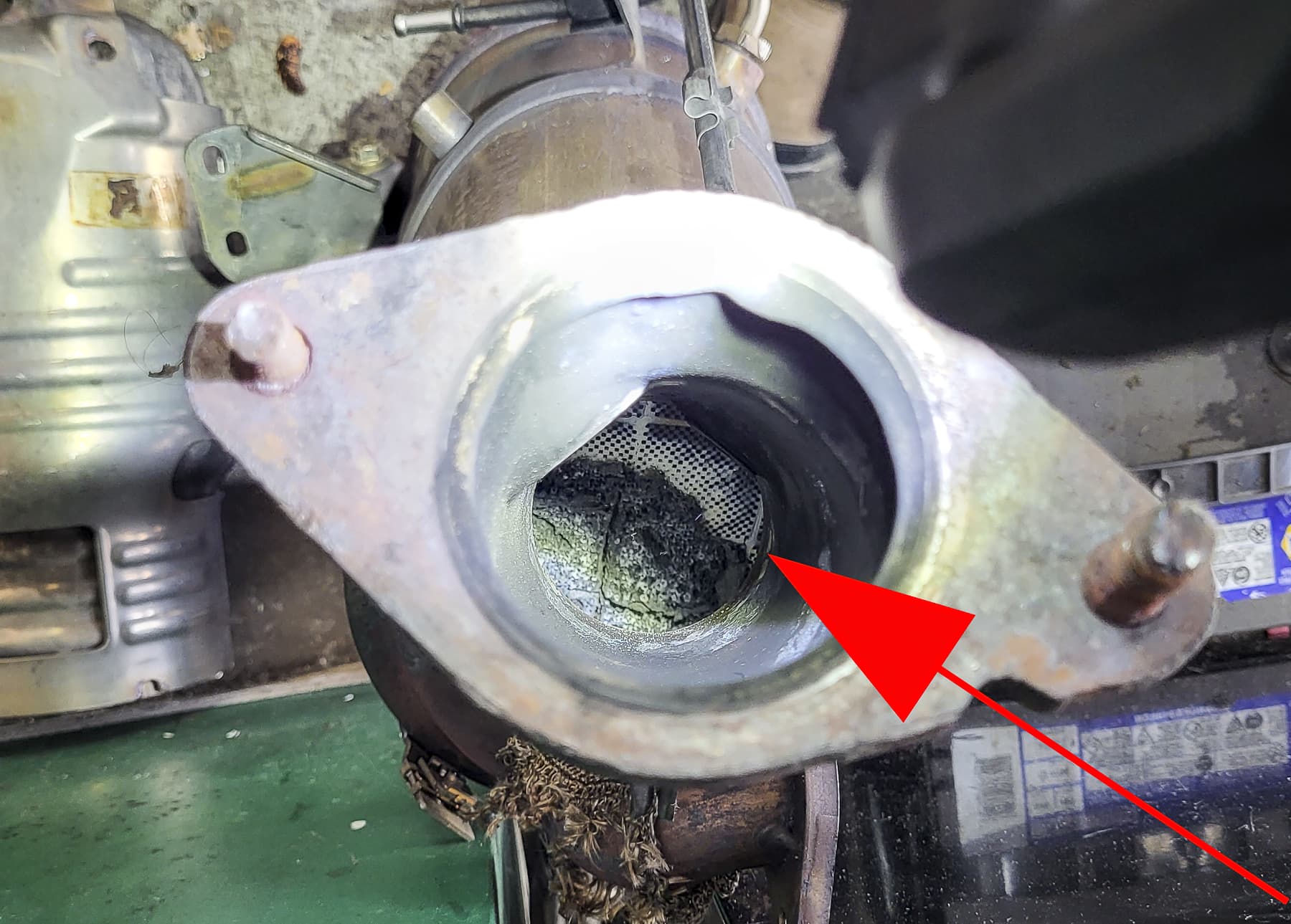 And you know, once you see that, it's like the part has to be replaced with something new. There's no other options. We have other options of having them cleaned but in the case of this one, that's not the case.

Mark: Is this an expensive part?

So we're able to have them cleaned. There's companies that actually specialize in cleaning them. It does a good job, but it's not as good as a brand new one. But the cost can often be like a fifth of the cost of a new one. So if it lasts a few years, you know that's not a bad. It's sort of a weighing game with how much, you know, what the labour is to take it out. But in the case of this one, we would've had it cleaned, but we had to go new.

Mark: So how did the vehicle work after the replacement?

Bernie: It ran great. And I actually was away at the time, but I believe it was fine. I'd say away after we had it completed. Ran fine, but a thousand kilometres later, the vehicle's back and it's got some other problems with the diesel exhaust system. So we'll save that one for a different podcast once we get that all sorted out and solved.

But the diesel exhaust fluid, which we'd rectified by replacing a couple of components and putting clean fluid and resetting everything, the warning has come back on. And yeah, it's a bit of a frustrating issue, but the diesel particulate filter is good.

Mark: Okay. Yeah. This a pretty rare vehicle. How does it perform and is it reliable?

Bernie: Well, I have to say that it performs very nicely. I often think when I drive modern diesels, I've been in this business for a long time, when my hair was much longer and not gray. And diesels were very slow and sluggish and they're kind of horrible and noisy and rattly. This engine is a little noisy, but it's pretty quiet. And it performs really well. It's got a lot of get up and go. It's pretty amazing. But as far as reliability, I have to say, it's not great.

You know, this vehicle has 91,000 kilometres, 2017. We're doing this podcast in 2022, which I do the math that makes it five years old. It's not very old. Already it's had a lot of money spent in our shop fixing things and before we worked on it, it's been elsewhere. Maybe the dealership or somewhere else. So not very impressive I'd say.

And we're still working on sorting some other things out. So I have to give a thumbs down to this vehicle. I don't do that very often, as you know, I'm pretty generous, but this one I have to say, it's not close to my recommended list.

Mark: And there might be engineering issues, but this also falls along the idea that we've shared or you've shared before, which is don't buy a diesel if you're not gonna drive it a lot. 91,000 kilometres in five years is not being driven very much really.

Bernie: It's not really. I mean, that is a fair bit of mileage on an average car, but it's not really a lot for a diesel. Yeah, you're right. And you know, you really need to be getting these things out on good highway drives. They need to get hot. If you're doing a lot of short commuter trips, it's not good for the engine. So that does have an effect on it for sure.

You know why this particulate filter melted down, I'm not a hundred percent sure. There's nothing really in the data and the diagnostics we've done that would indicate why that happened. Sometimes at least on a gasoline powered engine with a catalytic converter, if your fuel mixture's too rich or say you have a bad fuel injector, you're dumping fuel, the engine's misfiring, you'll wreck your catalytic converter and do this kind of damage really fast. But on a diesel, it's a bit of a different situation. So I'm not certain what the cause of this was, I mean, it could just be a badly made part.

Mark: If you're looking for service for your Jaguar or your diesel, the experts to see, the actually other shops send their diesel problems that they can't fix to these guys in Vancouver, Pawlik Automotive. You can reach them and book online at pawlikautomotive.com. Or you can call them (604) 327-7112. Get your stuff repaired properly. Thank you for watching, and thank you, Bernie.