Mark: So 2017 Range Rover diesel. What was going on with this vehicle?

Bernie: This vehicle came to our shop. It was due for a maintenance service, an A level service. And that's what we did on the vehicle.

Mark: So, what do you do during an A level service?

Bernie: The A-level service on this vehicle, I mean, the heart of the service is an oil and filter change. But along with that, we adjust tire pressures, do a visual inspection of the vehicle, under hood inspection. Look at fluids. Inspect lights. I mean, a lot of these things are monitored by computer these days and things like lights, but it's always good to look at them because surprisingly enough, there's the odd light that isn't monitored on certain vehicles. You'd think everything would be, but it's not. So that's something we look at and yeah, fluids and that's basically it.

Bernie:  Yeah. Well, there was one additional item on this vehicle and that is the diesel exhaust fluid needs to be filled up during a service. And that's basically the only additional thing that we would do. I mean this particular service, it was due for air filters and cabin air filters which we replaced. But that's not a normal part of the service. It's a once in a while type of thing.

Mark: So diesel exhaust fluid. What the heck is that?

Bernie: So diesel exhaust fluid is kind of the latest, and I say latest because it's been out for more than a decade now, it's the latest exhaust emission technology on diesels. You know, there's NOx emissions, which are the big thing on diesel engines. Need to be reduced.

There's various ways you can build an engine, you can put EGR valves. You know, programming and things to reduce NOx, but really the ultimate way to do it is with a device called an SCR. It's a selective catalyst reduction and is the last piece in the exhaust system before the muffler.

So most modern diesels, they have the oxidation catalyst, which comes as the exhaust streams out, goes to the catalyst, then it goes to the particular filter and now it goes to the SCR. And the SCR has a urea injector, and that uses a special type of fluid. It's like a urea based fluid that's injected into the SCR that reduces NOx to pretty much nothing. So that's kind of like the magic bullet in diesels nowadays.

It's the one I know I've talked about before. It's the one that Volkswagen didn't want to do so they could do their emissions without it. And instead they faked it and because they didn't want the additional cost of putting an SCR system in the vehicle or the exhaust fluid system.

Bernie: Yeah, it would, it would have been cheaper just to charge a little more money for the cars and be honest with people, but, you know, it's just getting off on Volkswagen. I mean, it's caused them to invest in electric technology. And I think they're going to be one of the winners in terms of that. So in a way it's bad and good.

And I'm just gonna share a couple of photos real quick. I didn't take a picture of the engine on this thing, but there's, you know, a nice little picture of the the name badge in the back of the vehicle. 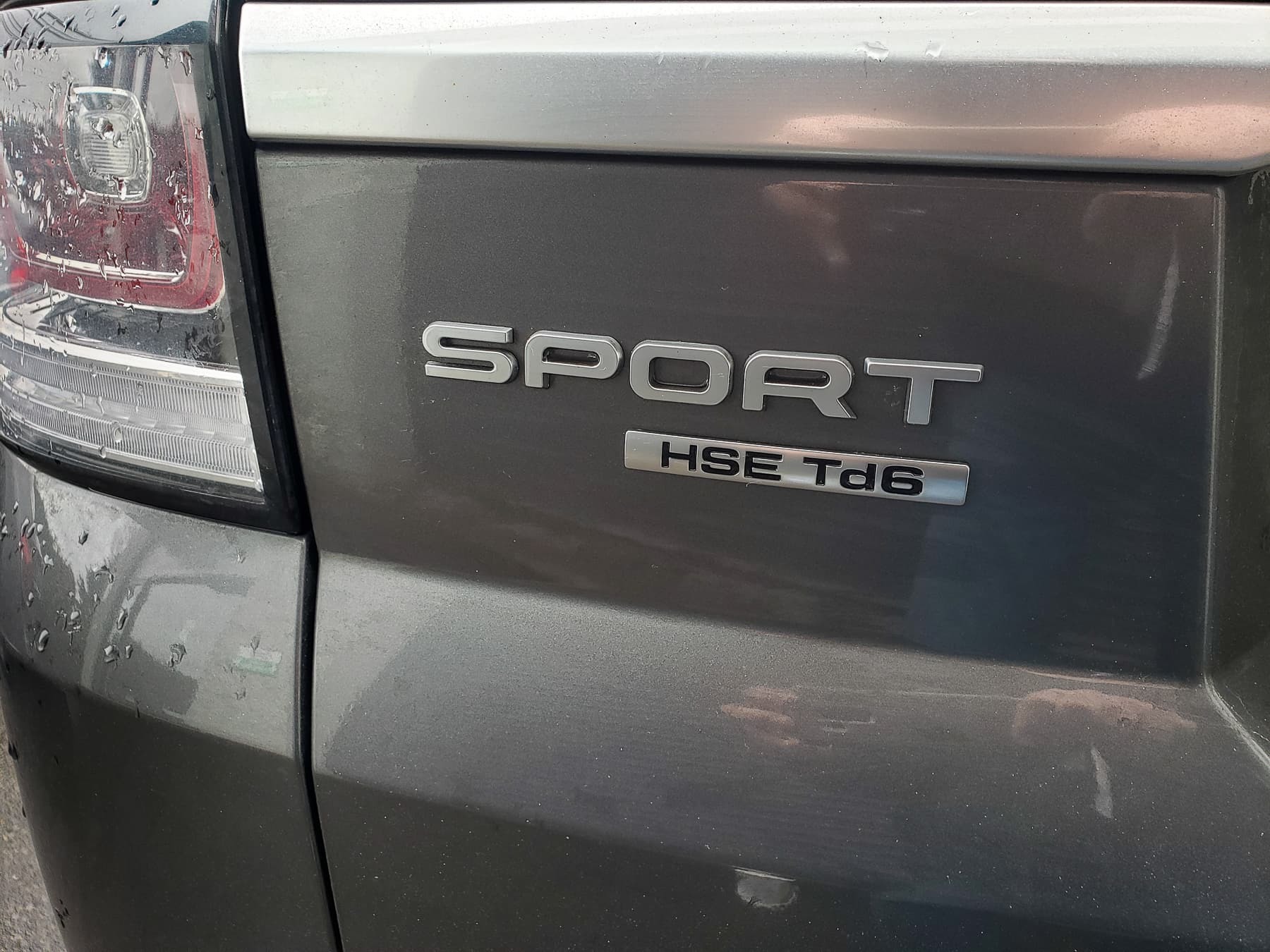 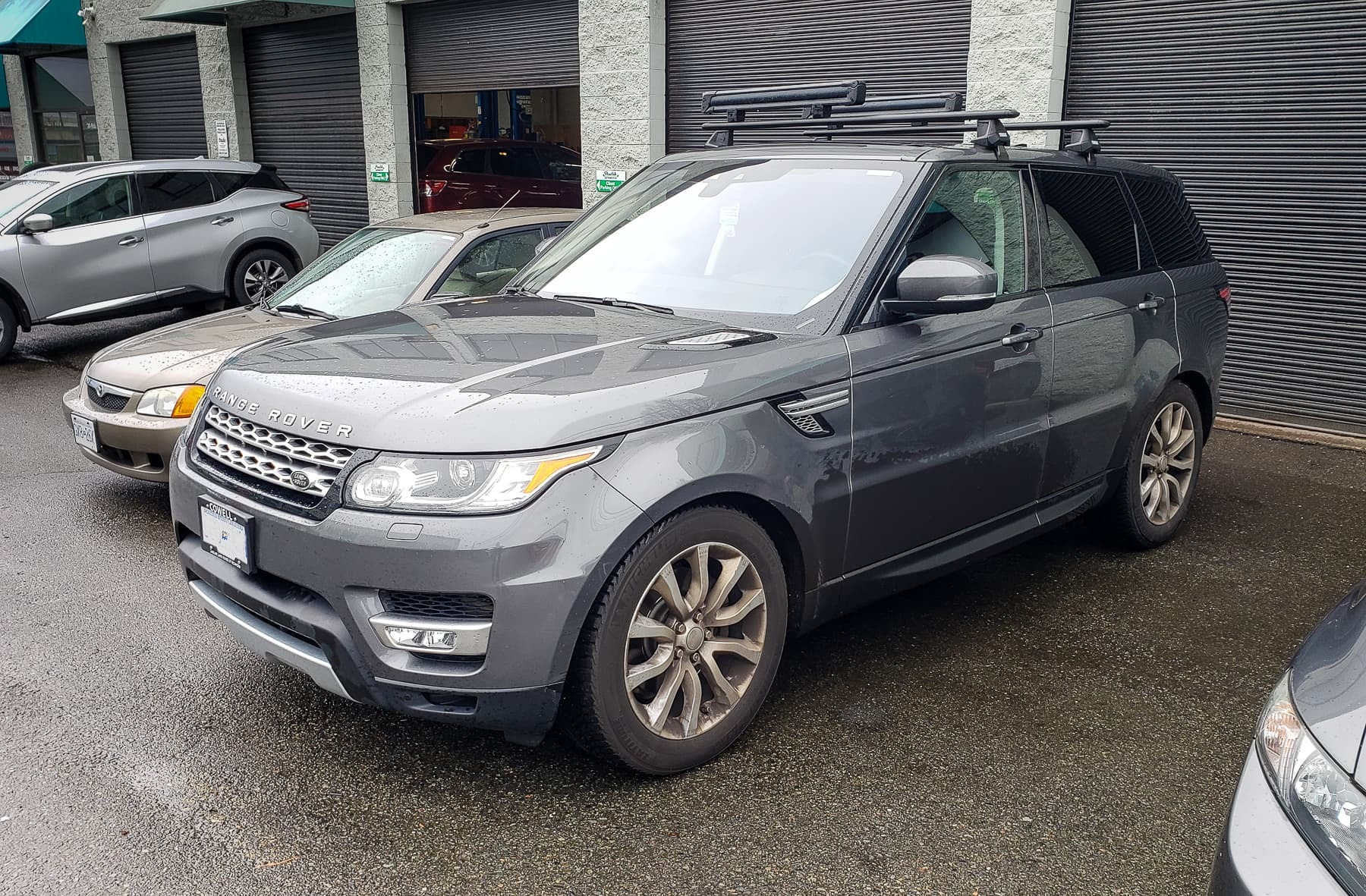 And always beautiful looking Range Rover to me, always a beautiful style, good looking vehicle. And you know, it looks pretty much the same with the diesel, it's just when you pop the hood, that's where you see the difference and some of the specs.

Mark: So does that diesel exhaust fluid add a lot of cost operating cost to this vehicle?

Bernie: The actual fluid is really cheap and it lasts, you know, between probably I have to top it up every, maybe eight to 10,000 kilometres, depending on driving conditions and so on. And it, it's not expensive. I think on the bill of this service was about 45 bucks for the fluid and the tank was very low. So it's not a huge cost over that period of time. It's not like fuel, it's marginal. It's maybe a few cents on a litre of fuel for the amount that's used. So it's really very little, but where the cost does come in is when things start to break down, when things get old.

It's a complicated system. The fluid freezes very easily. So it has to be kept warm. So it's got a very complex system. It's got a tank, it's got a heater, it's got a pump, you know, obviously computer controls and an injector nozzle and piping. So there's a lot of bits and pieces that go wrong and they do eventually.

So this is a young vehicle. It's only four years old. It's got, you know, 50,000 kilometres, not much going on with it yet, but given, another five years, something in the system may fail and it's expensive to fix.

Mark: What are some of the other maintenance requirements for this three litre diesel?

Bernie: So fuel filters are one of them. Those are the things you won't find on the gasoline engine. Of course, I mentioned air, the engine air and the cabin air filter. But the fuel filter is one of them. And then the only other thing that's interesting on this engine is it has a timing belt, which is unusual for a modern engine. Most, you know, late model vehicles don't have timing belts anymore, but this one does there hasn't been a Range Rover Land Rover product in quite some time that's had a timing belt. At least in North America, but this one does. So that's the one other unusual maintenance requirement.

Mark:  Because that does have to be replaced on a certain strict maintenance schedule.

Bernie: It does. And if you're wondering when that is, it is a 180,000 kilometres or a112,000 miles. That's the recommended interval. So now, if the vehicle is 10 years old, you probably want to consider doing it. If you haven't got up to that mileage, but you know, they generally build these pretty well, but a failure of that belt will cause catastrophic engine damage. If it's old enough, it's probably won't be worth fixing, but if you do fix it, it'll be expensive. So the belt needs to be done at the right time.

Mark: So how are these Range Rover diesels for reliability?

Bernie: Well, so far so good. We don't work on a lot of them and they're not very common. I mean, there are a lot of Range Rovers around Vancouver and not a lot of diesels. So we've got a few clients with them, not many compared to gasoline models. So far they've been good.

Hopefully they will be a better quality, more reliable product than Mercedes, which we see a lot of. Not that Mercedes are bad, but there's just a lot that goes wrong with them. But hopefully these are going to end up being more reliable in the long run, but so far so good. They are nice and they've got good power, good torque. They can haul a lot of weight. So it kind of adds something, if you're looking to haul weight and you know say tow a boat or something, this could be a better vehicle than the gasoline powered one.

Mark: If you're looking for service for your Range Rover in Vancouver, BC Canada, you can call Pawlik automotive. You can reach them at (604) 327-7112 to book your appointment. You have to call and book ahead, they're busy. Check out the website pawlikautomotive.com or our YouTube channel Pawlik Auto Repair. Both have hundreds, no exaggeration. Hundreds. We've been doing this for nine years. Hundreds of videos on all makes and models and types of repairs. Of course, thank you so much for watching and listening to our podcasts. We really appreciate it. And thanks Bernie.