Bernie: This vehicle came to our shop with really no power brake assist. When you push the brake pedal to try to stop the truck it was really, really tough. So there was clearly an issue of what seemed to be with the power brake system.

Mark: What kind of testing and diagnosis did you have to do?

Bernie: Well started with you know, just looking under the hood to see whether all the components were hooked up. I mean, power brakes are somewhat of a simple system. There's usually a vacuum hose that runs from the engine, goes to a unit, the power brake booster. Will look at pictures in a few minutes, and that provides the extra boost when you push the brake pedal down. Usually a simple system.

So first thing I found was that the vacuum hose from the engine to the power brake booster was unhooked. It had previously been to a Dodge dealer for some diagnosis and estimating. The owner didn't like what they told him. We can talk about that in a minute too.

But what I found is the vacuum hose was off, so I thought, Oh, great, that'll fix it. It didn't, but it improved things a little bit. But this vehicle also uses a vacuum pump on the engine to provide extra boost pressure. We'll look at some details on that in a minute too.

So there a few further tests on the vacuum in the system with a vacuum gauge, and you could see the vacuum dropping off to zero very quickly, which explained the whole issue. So, pretty quickly diagnosed it that the power brake booster was the fault. As I said, I also tested the vacuum pump to make sure it was good and it delivered lots of vacuum.

Mark: So what did the Dodge dealer recommend for repairs?

Bernie: So the Dodge dealer recommended replacing the power brake booster, the vacuum pump, the plastic slash rubber lines that go between the brake booster and the vacuum pump and the engine, and also the master cylinder, the brake master cylinder. Which is completely ridiculous because in the time I spent to do the diagnosis, and this is why we do proper diagnosis to figure what's actually wrong, instead of just kind of throwing a dart and going, it could be these few things. And let's just spend way too much money fixing it, you know, just finding out what it is. So anyways, that's their list of things.

And the master cylinder was even a little more bizarre because clearly the brake pedal was hard and firm, and the vehicle would stop in a normal fashion. It just wasn't receiving boost. The fact that it was bolted to the booster is one thing. But it may also be that Chrysler only sells the master cylinder with the brake booster, but I kind of doubt that. Usually they're separate.

Mark: Yeah. So like you said, that seems ridiculous. Why would, is it just a cash grab? Is it just sloppy workmanship? What's going on? Why would they recommend so many parts?

Bernie: I think it's just sloppy, I don't wanna say sloppy workmanship, but like diagnosis that isn't really, well there is no diagnosis done. It's kind of almost a guessing game. Maybe there's a flow chart and the dealership follows the flow chart and they just say, you know, if this is bad, just replace all these parts. That's a possibility. Maybe that's Chrysler's way. And that often, you know, is the, I think the downside of dealerships in some respect is that they have these flow charts they've gotta follow for liability purposes and whatever they have, their large corporations easily sued. You know, maybe that's the way they do things, I'm not sure. But to me it seems like a rather sloppy you know, just a lack of care, a) in customer's money and b) you know, just not doing a proper job of diagnosing something.

Mark: So wouldn't this vehicle still be under warranty?

Bernie: No, it's not. It isn't that old, but I'm not sure what the timeframe on the warranty was. Mileage wise, it's over a hundred thousand kilometres, so that probably puts it, I mean, it was outta warranty anyway. So doesn't take long sometimes when you drive a lot.

Mark: What kind of work do you have to do to replace the brake booster?

Bernie: It's not a huge amount of work. Let's just have a look at some pictures here. So there's our power brake booster located right here. Master cylinder on the front here. And so it's really a matter of just unbolting the master cylinder. There's a few things in the way that need to be removed and peeling it out of the way. You don't even have to disconnect the hydraulic lines in this particular vehicle, so there's no bleeding involved. And then the brake booster unbolt from the back, It connects to the brake pedal. A few other things. And there's a vacuum hose on this side. 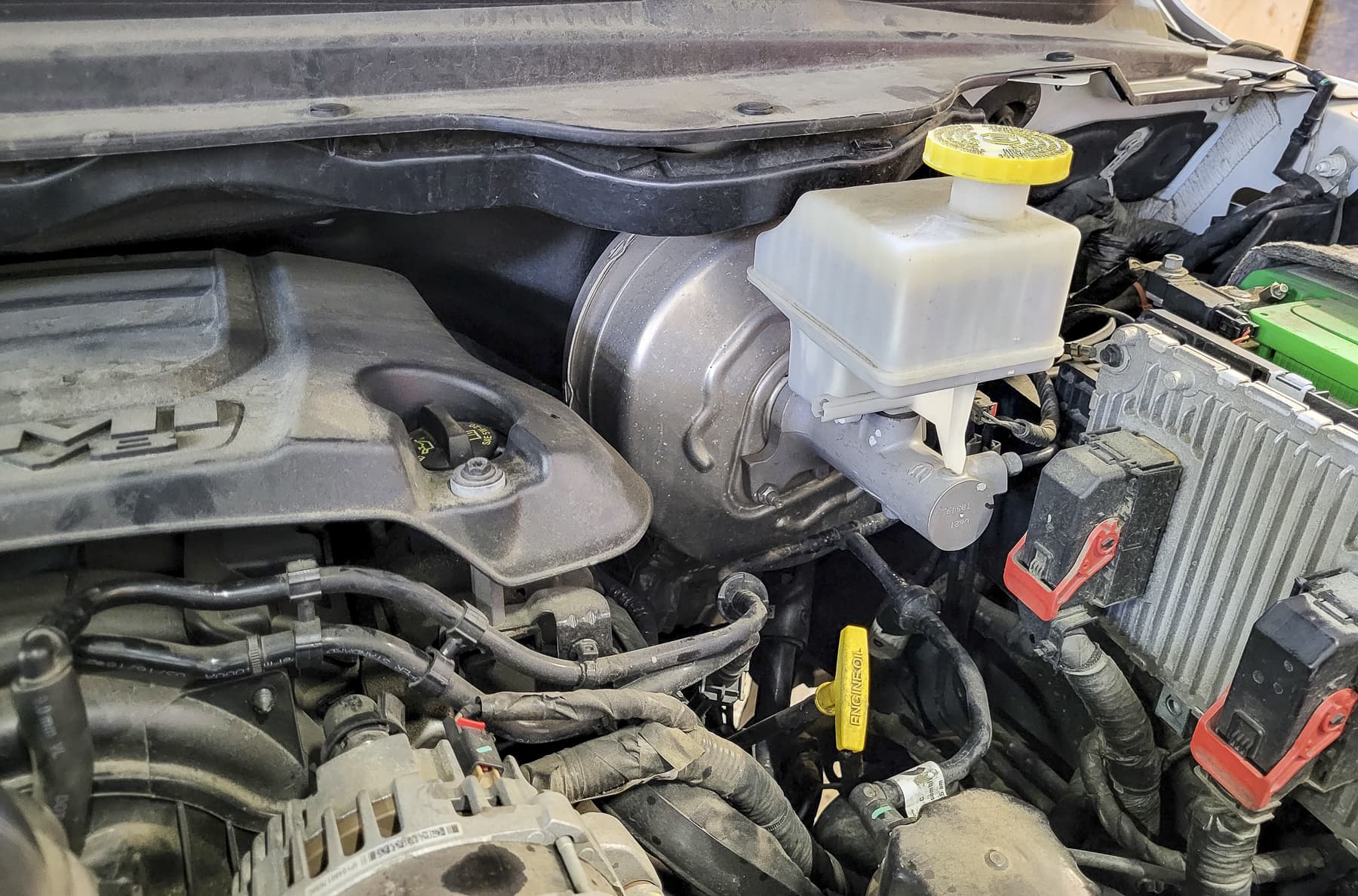 So if we look at this view here, again the red arrow points of the power brake booster. The yellow arrow is pointing at the brake master cylinder, where I'm kind of swirling my mouse pointer. The brake fluid reservoir sits up here. The vacuum pump that I mentioned where the blue arrow sits, so this is an electric pump and when the vacuum in the system is, you noticed the green arrow points, this is where the vacuum line attaches to the brake boost. And there's a sensor on here. 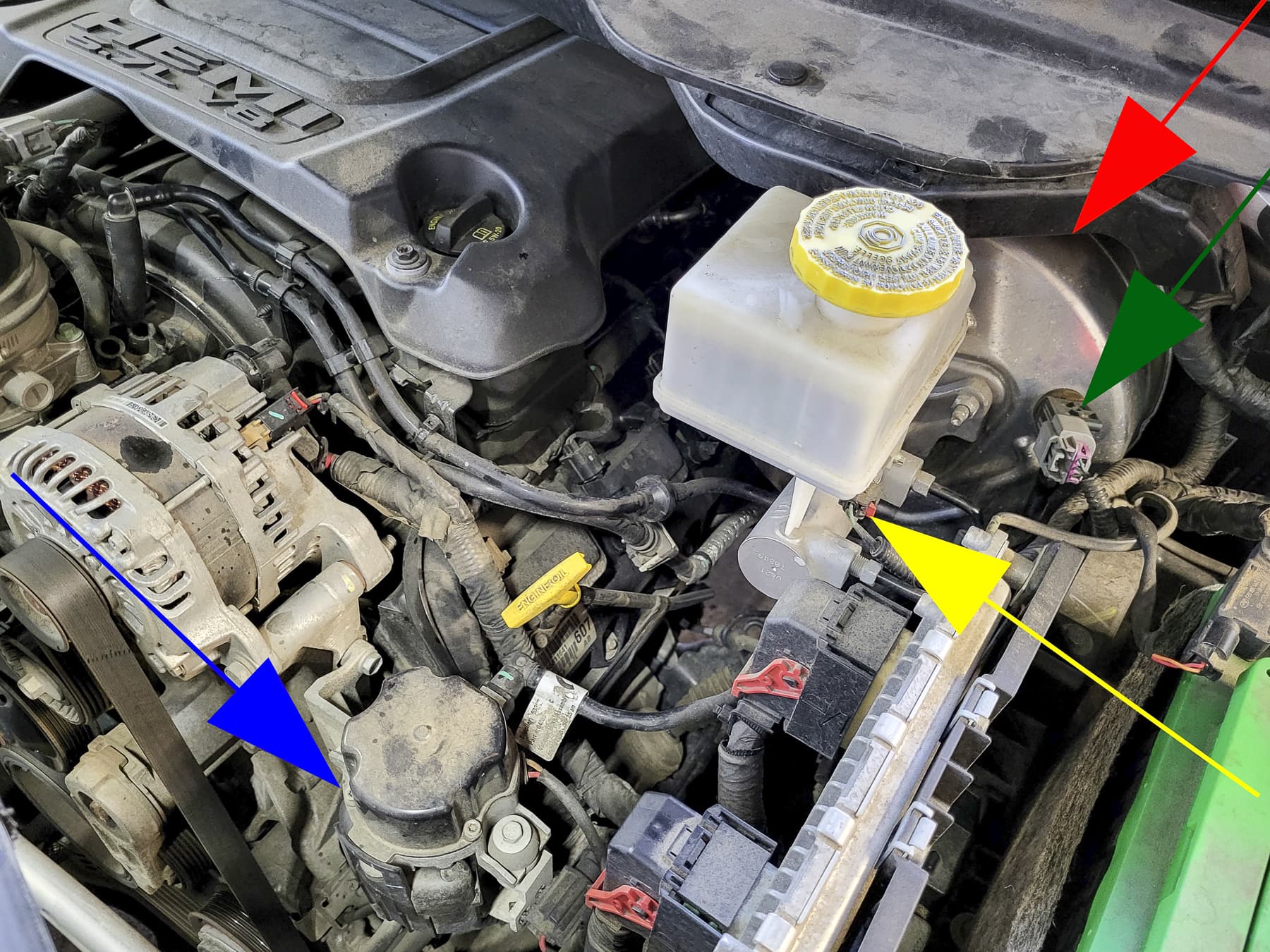 So if the vacuum drops below a certain level, this vacuum pump will kick the vacuum up. So make sure you have a good vacuum boost all the time. And as I mentioned, I did test this vacuum pump. It was in excellent shape. So why they recommended changing it, I don't know, it's just kind of ridiculous.

But there's also a vacuum hose, kind of hard to see here, but one of these pipes over in this area here, just connected up to the engine. This is one I found that was unhooked. So these are the parts and components, but this is the piece here, this sort of silvery coloured piece that gets replaced.

Mark: So is this premature wear on this part?

Bernie: I would say so. I mean, power brake boosters usually last quite a lot longer. Usually they're good for, you know, sometimes 10, 20, lots of 30 year old cars driving around with a good power brake booster. So yeah, I'd say it's a little premature. Maybe just a fluky thing, but yeah, it's definitely far too early in my opinion. For a truck that's only barely four years old.

Mark: And not hugely high kilometres.

Bernie: No, not hugely high kilometres. I mean, doing the math here, it's maybe 25 Ks a year type of thing that this person's been driving.

Bernie: Yeah, really, it's not crazy.

Mark: And how are these Dodge Ram trucks for reliability?

Bernie: Well, I have to say, you know, based on this particular issue and a couple other things were going on with this truck, when I actually diagnosed it, I noticed as soon as I started the engine up, you could hear a ticking sound coming from the engine, which was clearly an exhaust leak. And the exhaust manifold gaskets were blown, you know, which is not uncommon on these engines. But you know, again, it's a four year old truck. It's got blown exhaust manifold. That'll be expensive to repair. And then after we repaired the power brake boosters, it took a couple of weeks to get the part.

After we repaired the power brake booster we noticed, it was a cool day that we repaired it, we noticed the dash was steamed up on the right hand side. And you can see actually antifreeze blowing through the cabin. So the heater core is blown and I'm going like, what? You know, like a four year old truck. Blown heater core, leaking exhaust manifold gaskets, power brake booster. Not so good I think, you know.

Very nice truck though I have to say, when you get in the cabin of this thing, it's probably one of the nicest pickup trucks I've ever been in. So not saying that all Dodges are bad or have problems, but you know, this thing is very easily, if you're out shopping for trucks, very easy to be seduced by just how nice this truck is inside. And certainly a very nice ride. But just be aware, you might have a few more repairs on these things than you'd like.

Mark: If you're looking for service for your Dodge Ram or any Dodge product in Vancouver, BC Canada. You can call Pawlik Automotive or you can book online at pawlikautomotive.com. That's probably the easiest way. They'll call you and find out what's going on and get ready for your appointment. But you have to call or book online ahead of time. They're busy, always. You can call them at (604) 327-7112 to book your appointment. And we really thank you and appreciate you watching and listening. Thanks Bernie.

Bernie: Thank you, Mark, and thanks for watching and listening.