Mark: Hi, it's Mark from Top Local. We're here with Bernie Pawlik, Pawlik Automotive in Vancouver. Vancouver's favourite auto service experience. 22 time winners of Best Auto Repair in Vancouver as voted by their customers. And today we're going to talk about a Mazda 3. How are you doing this morning, Bernie?

Mark: So this is a first maintenance service. What was happening with this vehicle?

Bernie: Yeah. So it's a 2019, near new car and the owner brought it in to have her snow tires removed, summer tires installed, and to have the first maintenance service, it had about 7,500 kilometres on the odometer. So it was due for its first service.

Mark: Okay. Wait a minute. Don't you have to take your car to the dealer? What about the warranty?

Bernie: No, you don't. And that's a bit of a myth. I mean, some people don't hear that myth, but a lot of people do. Yeah, no, you don't have to take your car to the dealer. Your warranty will not be voided if you have it serviced elsewhere, provided of course, the service is done properly. You know, with the right fluids and the right filters and fluids, which we use. And, you know, the maintenance schedule is followed.

Mark: And recorded, I suppose?

Bernie: And recorded. Yep. So you need to, you know, have it in invoiced, recorded. They used to have books, you know, where you'd stamp stuff in books. I mean, you didn't have to even do that, but that was something we've done for customers over the years. So if the vehicle is under warranty, you know, we would stamp their book that the service was done at a certain time, which makes it easier to prove if your engine blows up or something. But, yeah, no, you don't have to take it to the dealer. And many people think so.

Now sometimes the dealers offer incentives, like free service for the first, you know, first one or two oil changes or something. They throw some stuff in, which, Hey, you as we'll take it up. But you know, if they don't, you're free to go where you want to go.

Mark: And of course you guys provide that list of all the warranty or not the warranty work, but the service work that's been done over the years. So if somebody were to sell their car and one of that record you provide that as well, is that right?

Bernie: Yeah. All of our invoicing is done in a computer. It's all saved. It's backed up to the cloud, the program system that we use so I mean, unless the cloud disappears, that data will always be there. And we frequently get clients who say, Hey, you know, can you send me all your service records? And it, you know, it's a little bit of work, but we're happy to do it and we can take care of it and we can just pull up all your invoices and send them all in. So we have records.

Mark: So was this just basically an A Service or what you call just like an inspection of the vehicle and oil change?

Mark: Were there any issues with the car?

Bernie: No, none at all. Everything was in a perfect working order. Nice and clean. It's always a, you know, a treat for us to work on a new car, cause everything's so clean and the metal's shiny and just things that, you know, things you just don't see as a car gets older. So it's always nice.

Mark: So you've worked on Mazda 3s for decades, probably. How is this model?

Bernie: It's really good. I was actually impressed with a few features of this car. So I tend to think of a Mazda 3 as a, it's kind of, it's a lower end car. But the features in this car are amazing. Like they're really high end, you know, like nice leather seats. And this thing even had a heads up display for the, if you don't know what that is, that's basically, it displays the speed up on a, it's projected up onto the windshield. So when you're driving down the road and you can see how fast you're going. And this was like a feature that was only found in really high end cars. I'm thinking like a 20 year old Corvette. It had that, you know, in a performance car. It just, there's just so many neat features in this car. It just really impressed me. And I often think, you know, if this is a lower end car you know, what can you do to make a higher end car better cause this is like driving a high end car. It's pretty awesome.

Mark: And what about pictures? 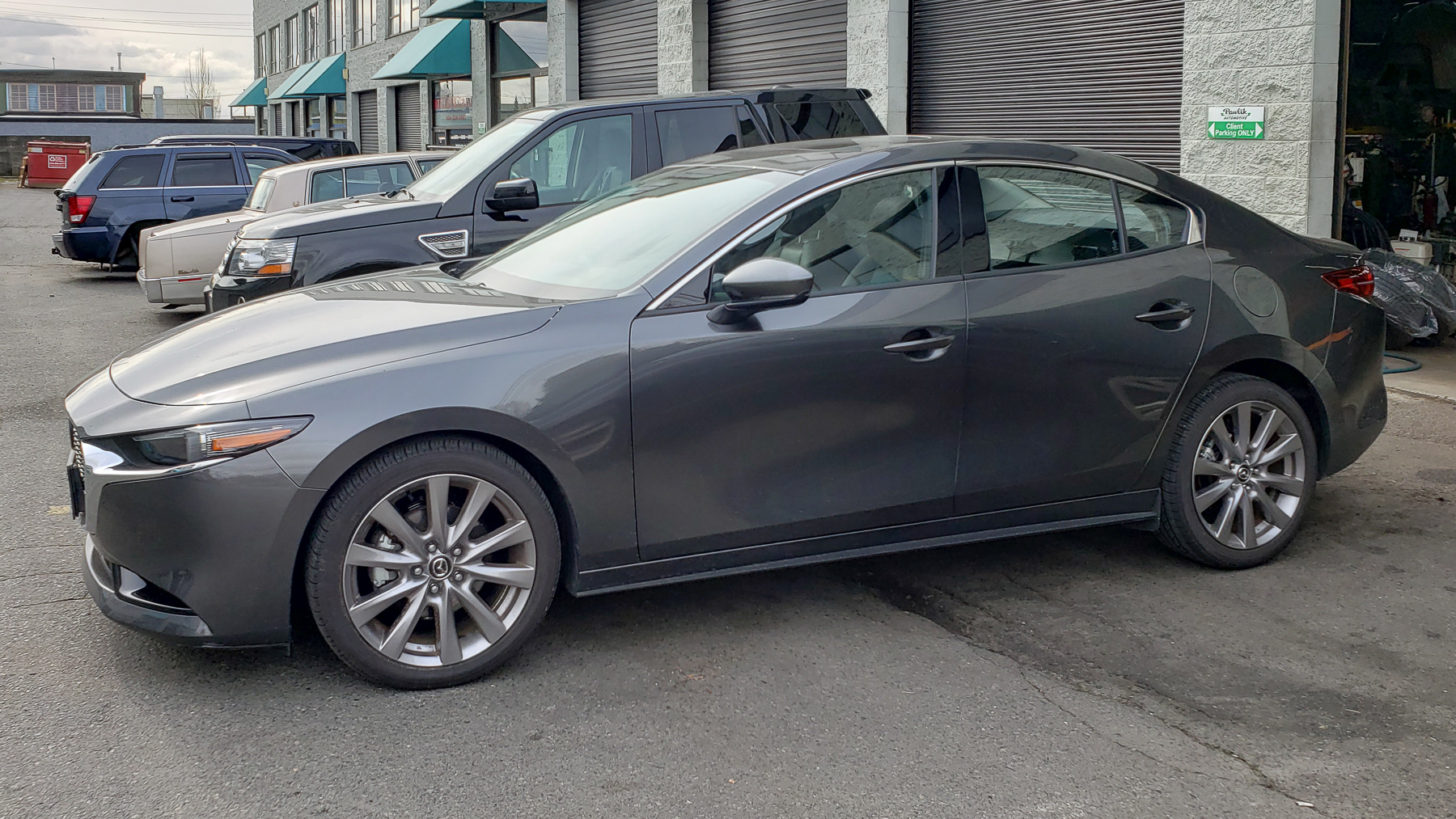 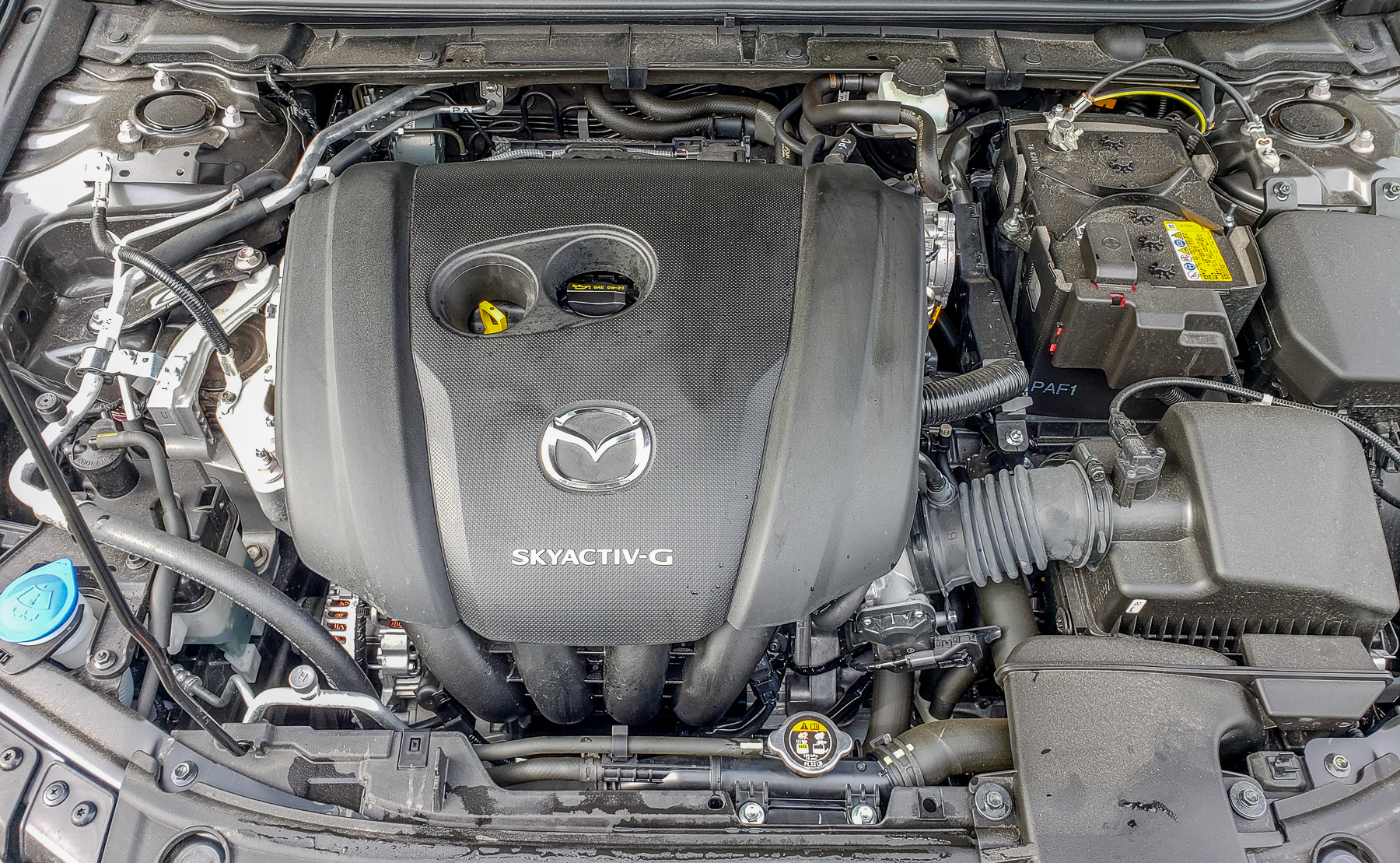 Okay. So there's our car, the 2019. I mean, it's even a good looking car too, nice wheels as well. We'll have a look under the hood. I tried to take a picture of the heads up display cause I thought that was really cool, but for some reason it just wasn't effective. Maybe it would look better at night. I don't know. But here's the under hood view.

So that's a gasoline internal combustion engine vehicle. We wouldn't have said that a few years ago, but now with all the hybrids and electric cars, things tend to look different under the hood from time to time. But you've got, you know, things like your battery, air filter box, the plastic cover over the engine, intake manifolds here you can see a bit of the alternator there, part of the engine mount here. This is a common problem and a lot of Mazda 3s. These engine mounts wear out, you never know when cars get newer, and I do get people who call me for advice about should I buy this new car or not? And honestly, I'm not really the best person to say because you know, every new car works fine. It's just who knows whether this engine mount will be the same as it was in models that are 10 years old or whether they fixed it. But, washer fluid, if you know something you're adding to your vehicle is washer fluid. And of course, the engine oil, this vehicle does have a dip stick a lot of higher end European cars don't have that. But as technicians, we appreciate dipsticks no matter what kind of car it is. It makes life a lot easier to just be able to mechanically check your oil is, it's a good thing. Brake fluid located back here.

So this is the SKYACTIV G technology that Mazda has been using since 2011. And they keep refining it a little ways, but basically SKYACTIV is Mazda's  answer to you know, high fuel economy, high efficiency engine. It's probably about, I don't know, exact percentages, but compared to the previous generation before SKYACTIV, the fuel economy is far better on these vehicles than it is, and more power probably by 20-30%, somewhere in that range.

So they did that by increasing the compression of the engine and then using direct fuel injection to deliver the fuel to the vehicle. And, and through that, a number of other technologies have improved the fuel economy enormously. So it works pretty well.

Mark: There you go. Customers happy with the brand new Mazda 3 and it's gonna run well for a long time.

Mark: If you're looking for service for your Mazda in Vancouver, the guys just call are Pawlik Automotive. You can reach them at 604-327-7112 to book your appointment. You have to call and book ahead even during crazy time right now. Pandemic silliness. They're still busy. And, if you're in Vancouver, give them a call, 604-327-7112. Check out the website pawlikautomotive.com. Hundreds of articles on there. Pawlik Auto Repair is the YouTube channel. Leave us a review on Apple podcasts or wherever you're listening to this, picking up this podcast, we'd really appreciate it and thanks, Bernie.

Bernie: Thank you, Mark. Thanks for watching. We really appreciate it.