Mark: Hi, it's Mark from TLR. I'm here with Bernie Pawlik, Pawlik Automotive in Vancouver, BC, Canada, and we're talking cars. How are you doing Bernie?

Mark: So today's victim of 2021 Subaru Crosstrek, a brand new car coming in for an A service. What was going on with this vehicle?

Bernie: Yeah, this vehicle came in for its first service. Due for an A service and an oil change. And that's what we did.

Mark: So what's an A service, what's involved in that?

Bernie: A services are our basic maintenance service. Oil and filter change along with a visual inspection of the vehicle, adjust the tire pressures. Do a visual look around under the car and under the hood. Look at fluids to make sure they're all full and clean and that's kind of, and the lights. And anything else of note, of course.

Mark: Did you find anything that needed to be repaired?

Bernie: Nope, of course, a brand new car it's like nothing, nothing, it's always a privilege working on a new car when everything's clean and including all the suspension components are still painted fresh. So yeah, nothing at all. We wouldn't expect it anyways, but you never know.

Mark: So do you service new vehicles pretty often?

Bernie: From time to time? You know, it's not a huge part of our business, but we do get some clients who bring their brand new cars to us for service.

Mark: So any disadvantage or problems with bringing my brand new car to an independent shop compared to the dealer?

Bernie: No, no, nothing at all. I mean, the most important thing was if you do go to an independent shop, I mean, make sure they're using the right fluids, using the right oil is important and the oil filter. I mean in the case of this service, or any parts that are used should be, they don't have to be a Subaru parts, but they have to be at least equivalent quality.

And make sure all receipts are kept because obviously a warranty on the car, if there's ever an issue, you need to make sure they have all the documentation. You know, for us, we have a computerized data system. So we keep all our client's records. If you've been coming here a few years and all of a sudden your engine has a problem or a leak and you need to provide documentation. If you've misplaced it, we can always do it. But you know, just make sure you keep it yourself. That's the best thing.

Mark: So people generally think that you have to go to the dealer to maintain your warranty. Is that true?

Bernie: No, it's not. And it clearly states that you just need to have the vehicles serviced and often dealers will sort of insinuate that you need to bring it to them. It's actually not legal. There are laws that say, they cannot tell you they have to service the car. So if they do, that's actually illegal, but you know I mean, dealerships are good. I mean, they work on their, you know, it's their car. They, they know them. Some people just choose to go elsewhere. But they're really, I don't know. Are they the best? Not necessarily. I don't know if I answered that question right or not, or if I drifted off there.

Bernie: Exactly. I think it's really the relationship with the people and some vehicles, you know, when you buy it new, they'll offer free service or they'll offer a discounted maintenance package, so you might be able to buy like, you know, two or three years worth of maintenance for $500 or something like that.

You know, those often sound like a good deal but, they will cut corners on stuff like that. They may not do everything that might be necessary to do on the car. I mean, they'll do the basic stuff. They'll make sure that whatever's, you know, covers the warranty will be done, but a lot of extra things that are probably important for the longevity of the vehicle won't be done.

So that's just something to watch for. But you know, if you get free oil changes, Hey, why not take advantage of it? You know, for the time, if it's included or if it's a very cheap package.

Mark: So this 2021 Crosstrek I'm was wondering when, how many kilometers till the first oil change?

Bernie: Well, this vehicle has about 9,600 kilometres. So that's about the range about 10 K's for the oil change. It's synthetic oil. So every 10 is good. So we'll just look at some pictures right now. 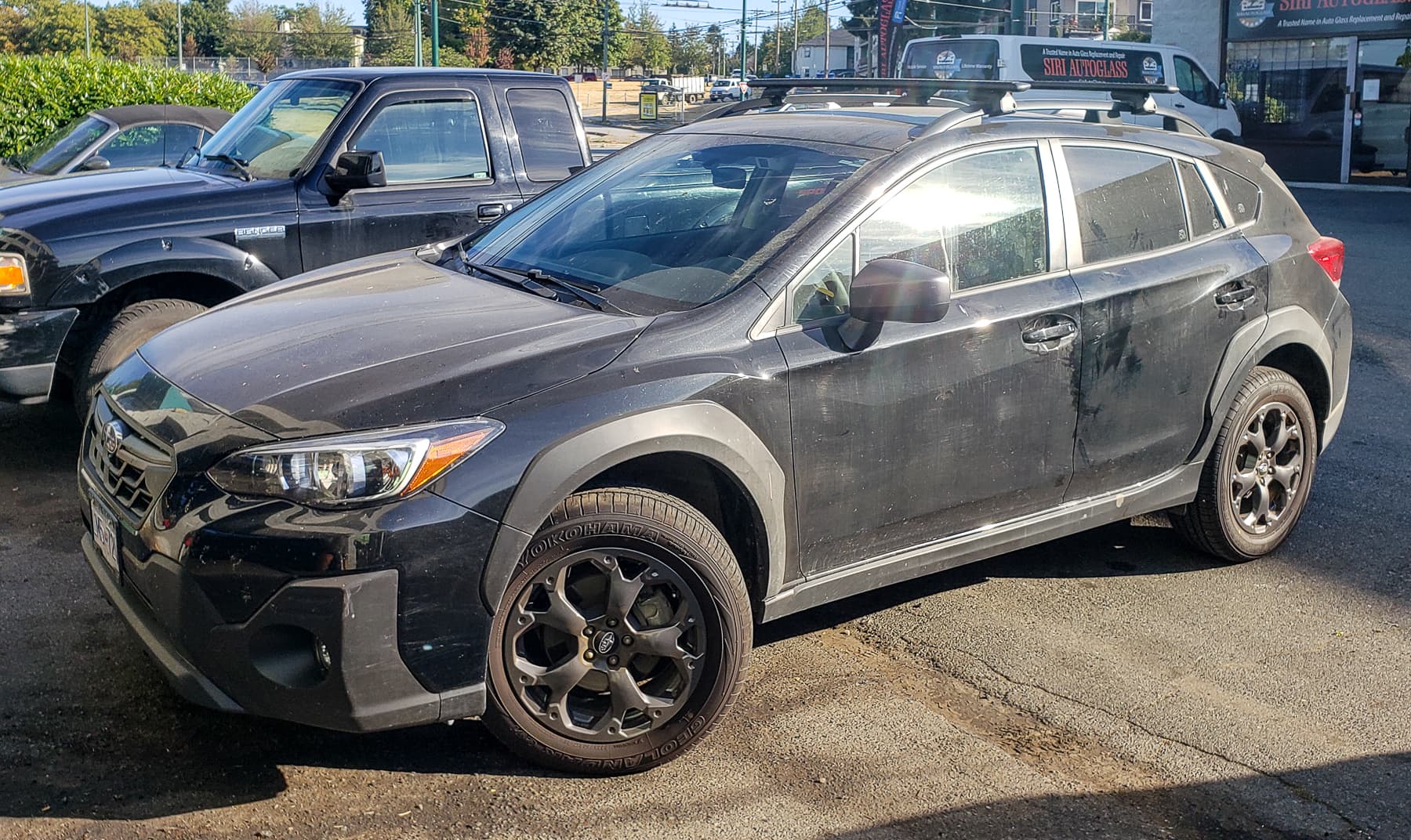 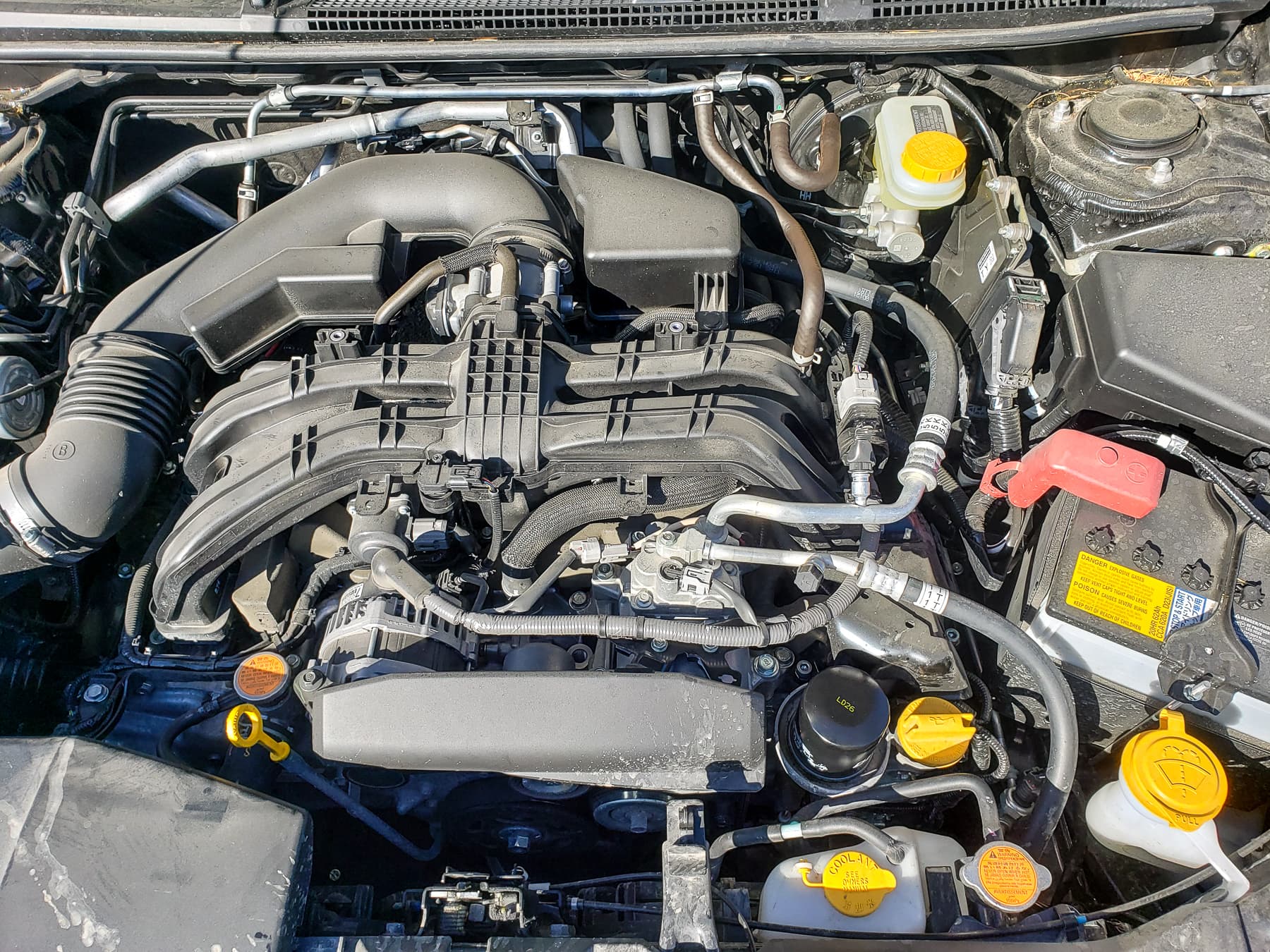 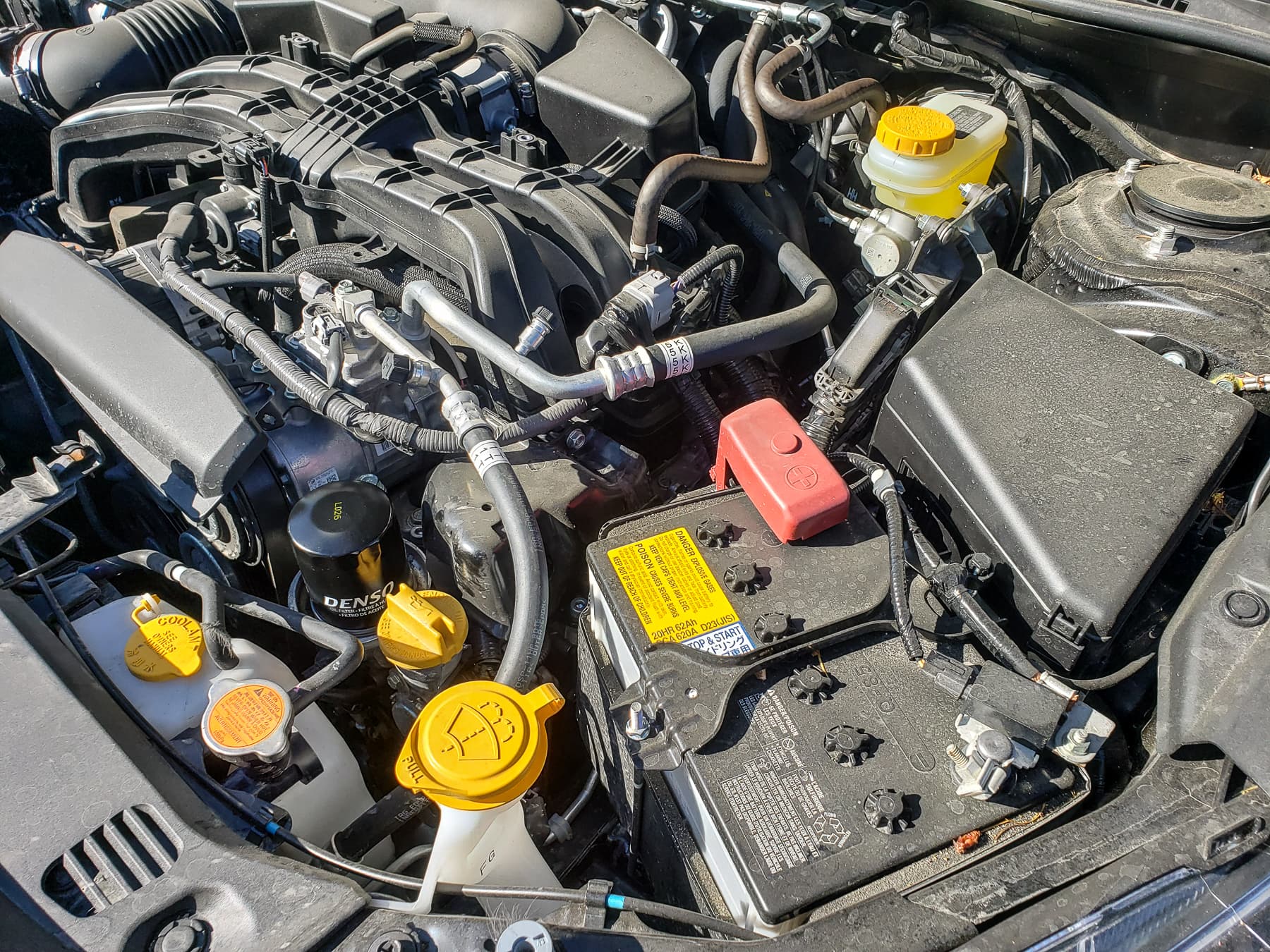 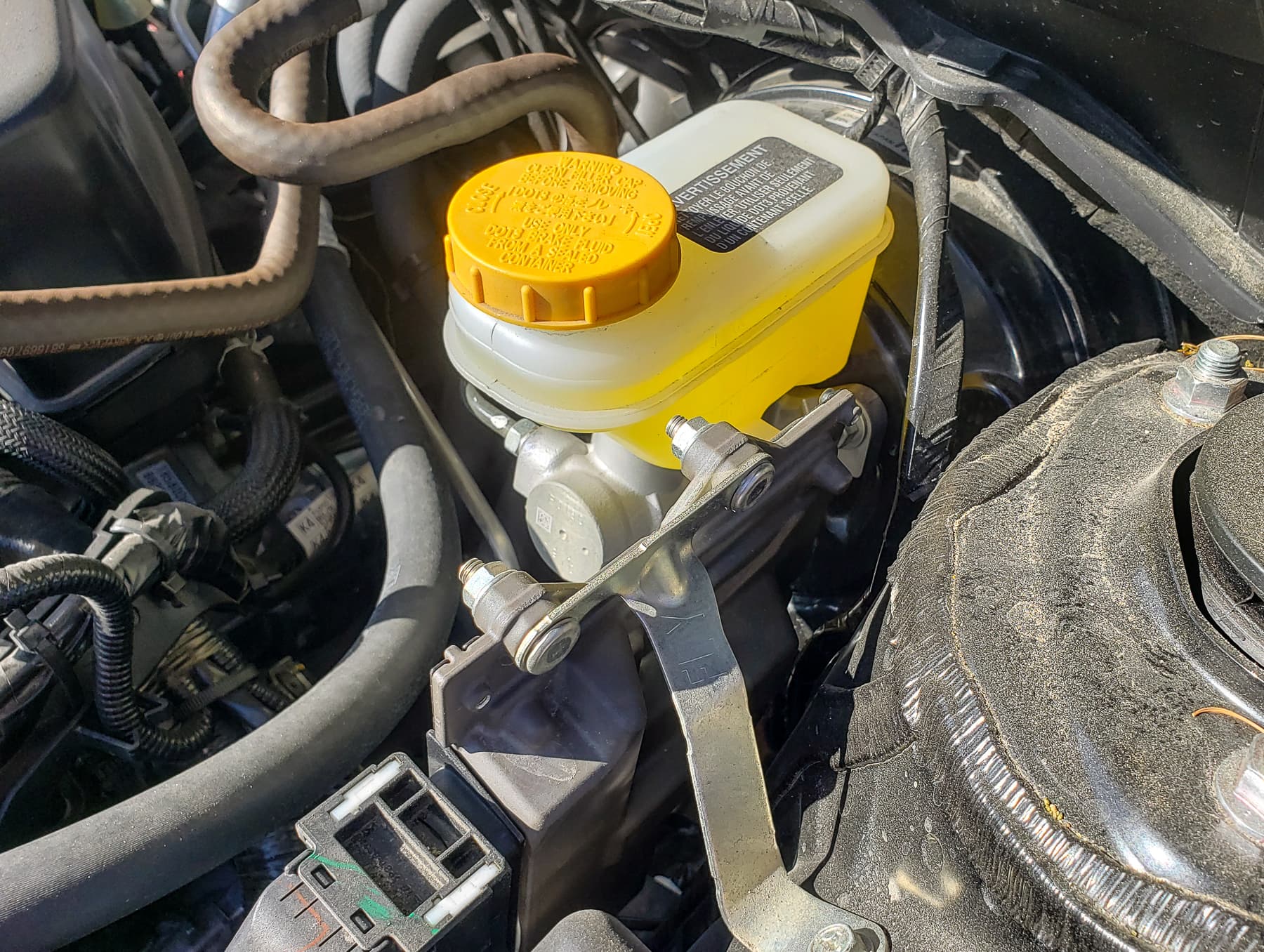 This is a brand new vehicle and came to us kind of dirty. So it doesn't look brand new, but it is. With a nice wash it'll look perfectly fresh.

Yeah, there's the odometer 9,658 kilometres. So it's good time to do an oil change on a vehicle like this and kind of typical of most modern vehicles, almost everything uses synthetic oil now. So that's about the right kind of interval for most cars.

Just looking at a couple of things on this car, here's the under hood view. Your typical Subaru Boxster engine 2.5 liter. This one uses a timing chain they've been doing that for well, at least 10 years now. For most models they have timing chains. So there's no timing belt to replace, which is one advantage. That was a sort of a major maintenance expense on a Subaru about every 160,000 kilometers.

They've color coded everything under the hood. If you can use the word color-coded you know, things that you might want to look at and service, there's your engine oil dipstick in yellow. The coolant overflow bottle, engine oil goes in the yellow cap. There's a radiator cap. Washer fluid and the brake fluid cap. So these are kind of things to look at and service and fill from time to time. So they've kind of nicely color-coded that.

Here's another view of the engine compartment. I found this battery interesting. This battery, I mean, as we're 2021, if you looked under the hood of a Japanese car in 1980, the batteries would look the same with these sort of twist on caps. They've used the same style of battery for years and for decades. And thought I just, this little view of the brake fluid is so clean. So if you ever wonder what clean brake fluid looks like, that's it, you know, it's six months old and you know, 10,000 kilometers old. So that's, that's clean brake fluid. That's how it looks when it's new.

Mark: So how are Subaru's for reliability?

Bernie: Oh they're really good. I know we talk a lot about them. As I mentioned, this one is the timing chain model. I think, you know, that it was a good move, they did. It's reduced the cost of having doing a timing belt and the timing chain seemed to be really reliable. We haven't done one yet. It's been out for pretty much a decade. And along with that, I mean, head gaskets were a problem with the 2.5 liter engine, the timing belt models, haven't seen a head gasket problem on any of these.

We did have one client with one of these timing chain engines where one of the covers had a leak. So we had to replace that. And it was a bit of a pricey job, but not crazy. And that's actually the only one we've seen, so. I'd say pretty good. I mean, there has been some oil burning issues, again in the last decade with some of these engines, so it's just something to watch if you're buying a used one. We can talk about that more in another podcast, but overall I think they're good vehicles. A lot of them use CVT transmissions and they seem to be pretty reliable, even though CVTs are kind of notorious for problems, but Subaru seem to be reliable. So overall good car. I like them.

Mark: So, if you're looking for service for your Subaru in Vancouver, the guys to see are Pawlik Automotive. You can reach them at 604-327-7112. Call and talk to them. They'll find out what's going on with your vehicle, get you booked in for an appointment. Or you can book online at pawlikautomotive.com. You'll have some questions to fill out. They'll get back to you. They'll inquire. Get ready for you to show up. So they're ready to go when you show up for your service or repair. And they service in all makes and models, all types, even though old vehicles, even the brand new vehicles, all of them. Diesels, everything. Pawlik Automotive 24 time winners of best auto repair in Vancouver as voted by their customers. Thank you for watching. We really appreciate it. The website is pawlikautomotive.com. The YouTube channel is Pawlik Auto Repair. Thank you, Bernie.