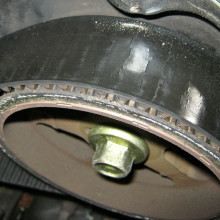 While repairing a water pump on a 1990 Toyota pickup equipped with a 3 litre V6 engine we came upon this very badly worn and about to break timing belt. It was perhaps by good fortune that this water pump was leaking as the vehicle was new to our client and he had no idea of the timing belt’s condition. 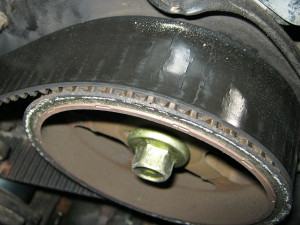 Here are a few facts about timing belts:

➢ The timing belt’s primary purpose is to drive the engine’s camshaft(s) in perfect synchronization with the crankshaft. This precisely times the movement of the engine pistons with the intake and exhaust valves.
➢ Some engines have 2 timing belts and often one of these operates balance shafts. Balance shafts are installed to smooth out the subtle but inherent shaking that occurs in 4 cylinder engines.
➢ On some engines the timing belt also drives the water pump and/or the oil pump.
➢ On many engines if the timing belt breaks the pistons and valves will collide and cause very expensive damage. This type of engine is known as an interference engine.
➢ On all engines, when the timing belt breaks, the engine stops immediately and cannot be restarted until repaired.
➢ Timing belts almost always give no warning before they fail.
➢ On most engines inspecting the timing belt can be quite time consuming as it is located under plastic covers and these are often covered with pipes, hoses and accessories.
➢ A proper timing belt replacement involves not just replacing the timing belt but also the front camshaft and crankshaft oil seals, timing belt tensioner pulley, idler pulley(s), tensioner assembly and water pump (depending on design of engine).
➢ Replacement intervals for most vehicles since the 2000 model year is 168,000 kilometers or higher, however consult your manufacturer’s maintenance schedule to be certain. Cars previous to this usually have shorter intervals and many cars made in the 1980’s or 1990’s require replacement at 96,000 kilometers or sooner.