A Tale of Two AMGs

Mark: So a tale of two AMGs. What was happening with these two Mercedes high-performance vehicles?

Bernie: So the first car we'll talk about the C63 came our shop for some service. I found something interesting about this car. I actually own a SL55, a bit older and, there was a commonality between these two cars, not just that they're AMGs that I thought was, this is kind of neat. Lets let's do a podcast and talk about AMG vehicles.

So the C63 came to our shop with a few issues. The owner suspected that perhaps he had a head gasket leak because his coolant was down. The engine was running rough. Fortunately for him, we never found any of those issues. And I think he may have been a little, I don't know, maybe read some stuff on the internet or got a little, jumped the gun anyway.

There are some other issues with that C63 that we found, but I think that the base engine itself is probably in pretty good shape.

Mark: So your car is about 17 years old, 180,000 kilometres or so I think. Yeah. So what's the difference? What was the commonality between these two vehicles?

Bernie: Yeah, so the commonality is that these engines, so AMG engines are hand-built in a very fancy factory. I might add. There are a lot of really cool videos you can watch them on how they build these. I've watched one myself. It's pretty neat. So it's not like some guy in a dusty shop putting an engine together. This is like a, you know, building an engine in a laboratory, but the AMG engines are all hand assembled.

And on top of the engine, they have a little tag that has the name of the engine builder. So what I noted is that the engine builder for these two cars was the same. These engines was the same guy. Ricardo Beck. So if you actually get a chance to watch this podcast here, your engines are still performing well out there. 17 years later on an SL55 with 180,000 kilometres. Still runs like a dream. So good work, Ricardo.

Let's look at a couple of pictures while we're at it. So this is a 2003.  These cars look kind of the same for quite a few model years. 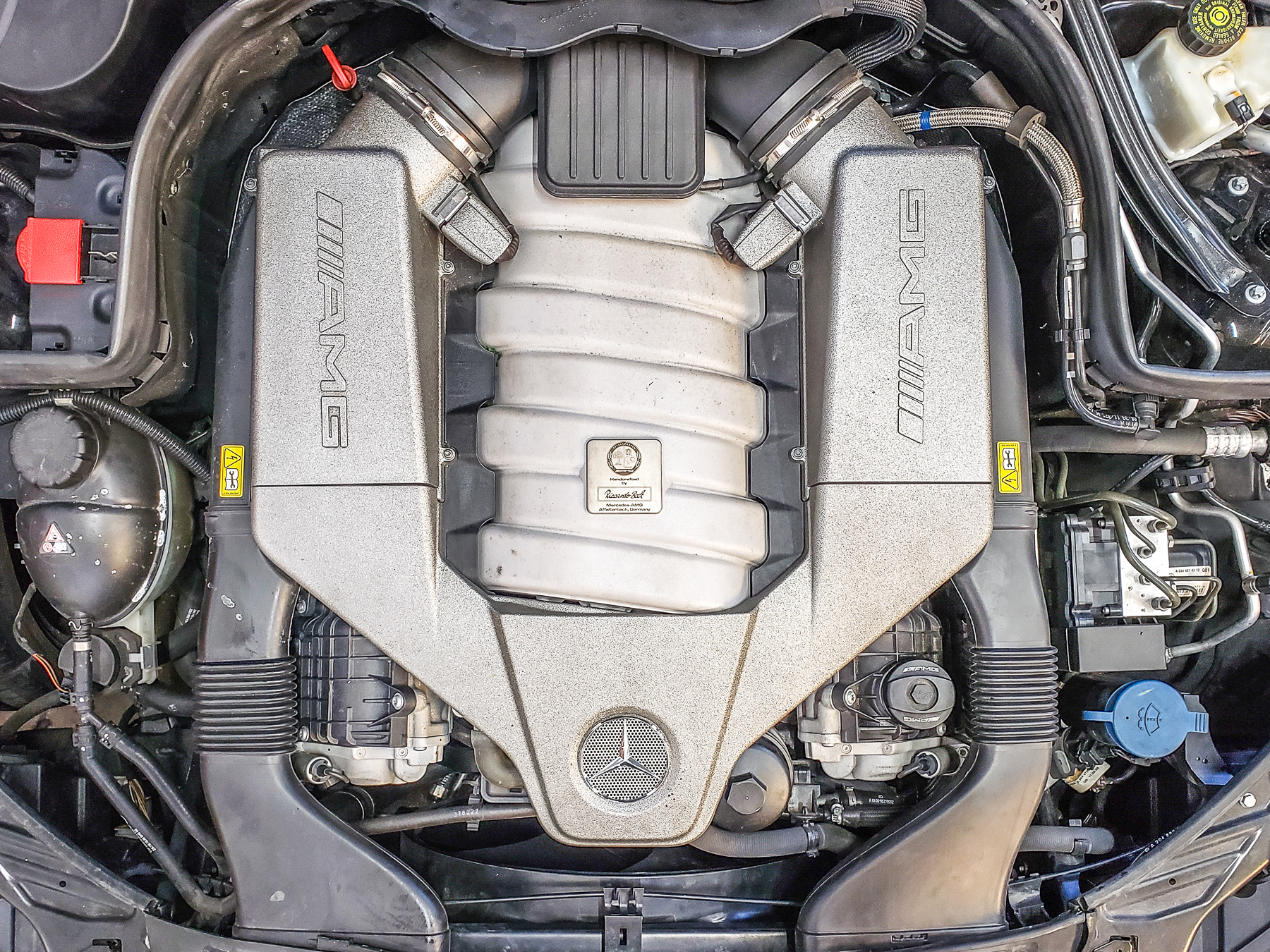 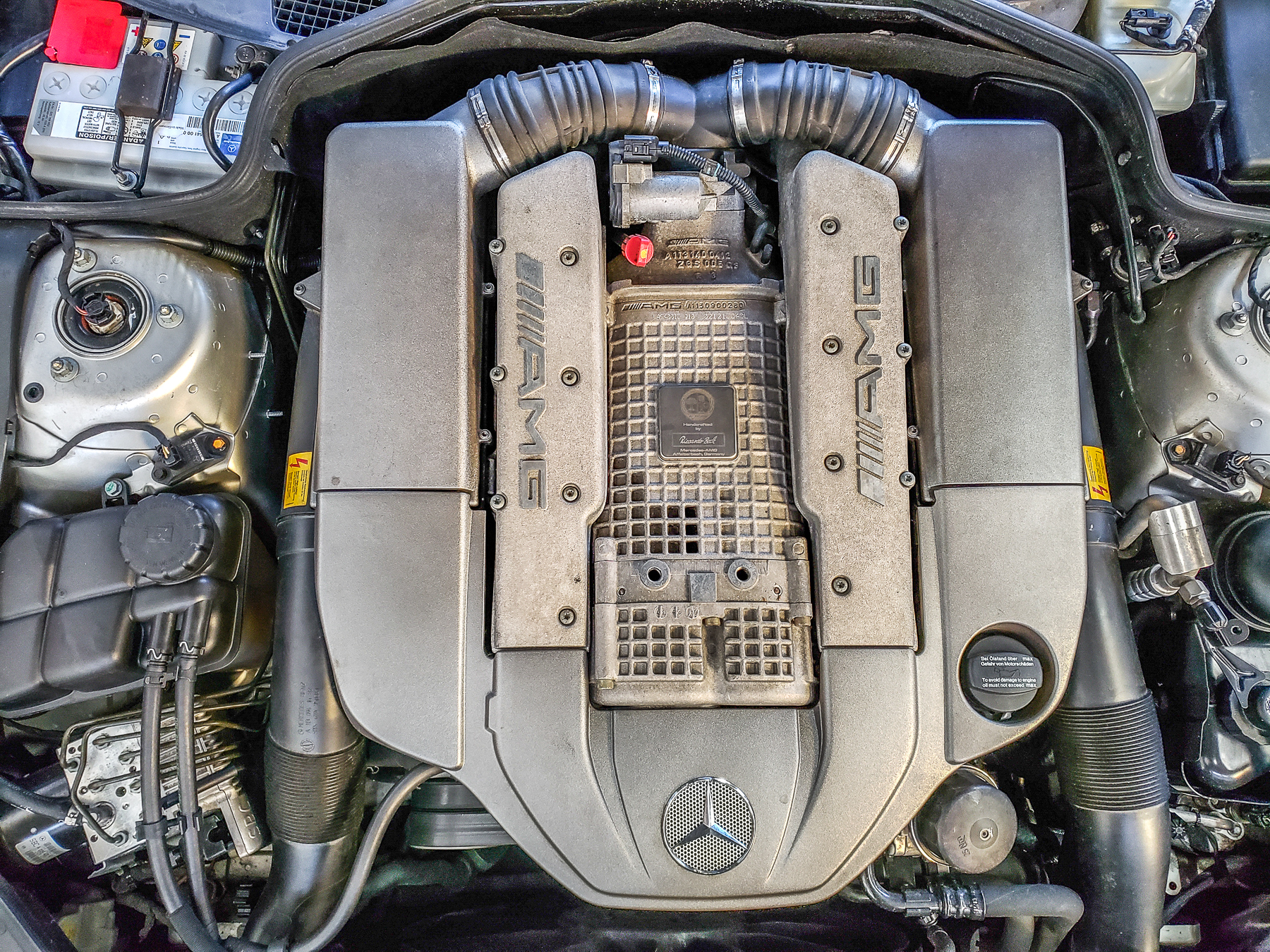 And the other vehicle we have in our story here, this is a 2009 C63 AMG as well. You know, quite different cars, I mean the SL55 of course is a hard top convertible Roadster. This is basically a four door base model sedan, but with the large 6.2 litre engine in it.

So, let's get into looking at some pictures of engines. So this is the engine in the C63. And you can see the name tag right here, Ricardo Beck. And this is a 6.2 litre naturally aspirated V8 engine. And this is Ricardo's older work the SL55, 5.4 litre supercharged V8.

Mark: So what's different about these two engines other than the size?

Bernie: Yeah. So the displacement is different, obviously. So we'll let's talk about the 5.4 litre the, in the SL55. So this is supercharged V8 5.4 litres. It's an overhead cam engine, three valves per cylinder, two spark plugs per cylinder. Interesting. It's just kind of technology of the day, and non variable valve timing. Whereas if we look at the, we'll just get into the six point, this is a 6.2 litre naturally aspirated.

So the other engine we'll look at it in a second.

This is the intake manifold, the air filters sit here and a lot of that is done for visual. I mean, these are nice looking engines. When you pop the hood, they look good. Even my wife is not really a car person looks under the hood of our. SL55 and that's a good looking engine. So they've done a really nice job in terms of the visuals of these engines. Especially since a lot of cars, they put plastic covers around everything. You can't see anything. These are variable valve timing on intake and exhaust cams. So it's more sophisticated in terms of how the actual, the base engine itself is built than the 55, which is kind of older technology. The supercharger sits right here. These are the intercoolers, which cools the air that goes into the engine. Then the air filters sit out here, but kind of, you know, kind of a similar sort of look to these engines.

Mark: So what about performance wise? How different are they? I imagine that the huffer-less (supercharger-less) one is a little bit less juice.

Bernie: It's a little last, but not a lot. I mean, they both go really well. They've got a lot of immediate and instant power. I really like superchargers and not just in the Mercedes, but in other vehicles. And remember, years ago I had a customer, the Ford Lightening truck. So it's about the same size engine I think, it's a 5.4 supercharged. And because this is a pickup truck like an, F-150. Driving it you tap the gas pedal and it's like, the power is instantaneous. Like, Oh man, you can really get addicted to this. It's pretty nice. You know, probably basically equivalent to like, you know, a decent electric car has. It's about as close with an internal combustion engine I think that you can get to an electric car feel. Because it's the power, so immediate. And you know, compared to like, you know, Mercedes has a lot of turbocharged twin turbo models, they kind of got away from supercharging, not a hundred percent sure why, but you know, you can notice, I mean, even though the turbo models have an immense amount of power, there's just this immediacy of the supercharged engine. That just has that microsecond of extra, immediate power that you don't get even with two turbos and all the engineering they put into it.

Mark: So are there different levels of AMG engines and vehicles?

Bernie: Well, generally speaking, the AMG engines are pretty much the same and one thing that's nice about AMG is even though they are kind of an exclusive upper end car, they are mass produced. And you know, the nice thing about any of these engines are available in a wide variety of lines of vehicles. So for instance, the 5.4 litre supercharged engine is available in a G wagon, you can get it in E series, you can get it in an S series, CLS. Variety of models. So it's available across the platform and same with the C63. You see that again in a variety of models also.

So the engines are pretty much the same. Some of them have slightly more horsepower, slightly less, but they're pretty much the same. There's certain trim packages that are slightly different. For instance, in the SL55 I have, you can get different brake packages and mine has the cheaper brake package. Although it's got, you know, fantastic, huge rotors and pads, it doesn't actually have the real, the extra AMG brake package. Which provides even better breaking than, you know, I mean I can stop that car almost instantaneously. But you can get better brakes.

The good news about having the cheaper brake package is, it's way cheaper to fix. The brake rotors on the AMG package are about $1,200 a piece. The ones on the one I have are about $300, which is kinda nice when it comes time to repair it. But, you know, if you're driving continuously, racing, you'd probably want the fancier brake package.

So those are a couple of things. But the other thing that just to watch out for, you can certainly see a lot of cars in the road that says AMG on the back. People, you can buy AMG tags. You can get wheels that are AMG package. So Mercedes offers, you know, a little upgrades and people sometimes put them on to try to make the car look fancier, but you can always tell if it's a true AMG by the actual model number of the car.

For instance, like a SL55, is the AMG version. Whereas the non AMG is an SL500 or an SL550, depending on the year. So if it has the three digit sort of engine code or model code, then it's not an AMG. So that's kind of the difference.

Mark: So reliability is probably not a major concern for someone who's looking at an AMG, but how reliable are they?

Bernie: Well, they are really reliable. You know, that's the nice thing about them too you can get a really high performance car that's super reliable and, you know, while it's not a Lamborghini or Ferrari, it's pretty damn close. An SLS is upscale, is up in that class, but you pay a lot more money for that model. But you know, they depreciate heavily which is nice. So if you're looking for a used one, you can buy one for pretty cheap and they are pretty reliable. I mean, they're well-built cars. I, haven't spent a lot of money on the SL55 I've got considering the mileage. I mean, fortunately I can fix it myself, which is a savings. And I mean, don't expect to buy one and have it be cheap to maintain because they are expensive, but they are generally a well built, reliable car. They're just complicated. There's a lot that can go wrong with them and parts can be expensive.

Mark: So there you go. If you're looking for service for your AMG or any Mercedes-Benz product in Vancouver, the guys to call are Pawlik Automotive. You can reach them at (604) 327-7112 to book your appointment. You have to call and book ahead, they're busy. Always check out the website. pawlikautomotive.com, hundreds of articles and videos on there all makes and models and types of repairs. Our YouTube channel Pawlik Auto Repair. And thank you so much for listening to the podcast. Leave us a review on iTunes or wherever you get your podcasts from. And thanks Bernie.