ABS Brakes - What are they, how do they work?- Pawlik Automotive Repair, Vancouver BC
0

ABS Brakes – What are they, how do they work? 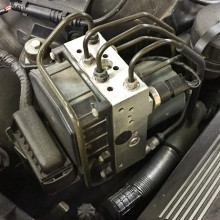 Mark: So we’re going to talk about ABS, what are ABS brakes?

Bernie: ABS is short for Anti lock brake system and as the name implies these brakes are meant to prevent your wheels from locking up. When wheels lock up the vehicle can skid and this is a dangerous condition.

Mark: Is ABS found on all vehicles?

Bernie: It’s on most vehicles, there are a few that don’t have ABS, but you’ll find it on about 95% of all the cars on the road.

Mark: So what happens when the system fails or doesn’t work properly?

Bernie: What happens when it fails is the vehicle reverts back to a normal braking system, so the vehicle should stop just fine and you shouldn’t notice a lot of difference. ABS only really works when you’re in a panic situation, when you have to hit the brakes really hard, or when you’re on slippery road conditions. So if at that point your ABS stop working, you have to go back to old fashioned none-ABS brakes which should really work just fine most of the time.

Mark: So I guess I jumped a step there… how do ABS brakes work?

Bernie: Basically how they work: there is a computer at the heart of everything and there’s a sensor on each wheel. The sensors are extremely sensitive, they’ll update the computer on a millisecond basis and will pick up whether the wheels are accelerating or decelerating and at what rate they are doing so. The computer is monitoring the speed of each wheel and whether you have the brake on or off and how hard you are braking; when it detects when one wheel is slowing down too fast, then at that point it will send a signal to the ABS module to adjust the braking application for that wheel. The ABS module contains a number of valves and solenoids and these can adjust the pressure to the brake system to each wheel. So it’ll release the pressure to the brake so there by stopping that wheel from locking up.

Mark: That sounds pretty complicated, what goes wrong with these ABS systems? 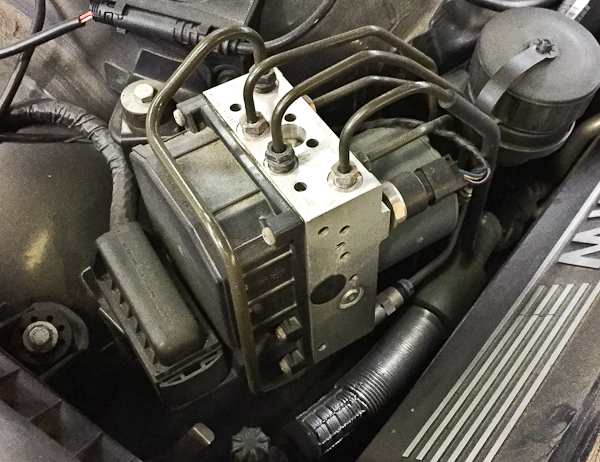 ABS Unit incorporating the electronic module, abs pump and valves on BMW 740i

Mark: So are these expensive repairs?

Bernie: They can be. Wheel speed sensors really vary in price depending on what vehicle and sometimes when you replace the ABS sensor you have to replace the whole wheel hub because that’s the way the vehicle is manufactured. It’s kind of common on American vehicles where the wheel hub assembly has the ABS sensor and the sensor ring as well. Now for price, we often think of fancy German cars as being the most expensive to repair, but often the ABS wheel speed sensors are extremely cheap for those cars and they’re actually very expensive for Japanese economy cars. You never know with cars which price is going to be higher or lower than others. The other thing that I failed to mention is diagnosis is needed every time: it’s important to find the right component, it’s a computerized system so there is a scan tool diagnosis and then an individual component testing as well to make sure we replace the right piece.

Mark: So what kind of maintenance should I be doing to maintain my ABS brake system?

Bernie: Well, there’s really nothing you can do to maintain it because most of it’s electric and it’ll live and die in its own time. One important thing for ABS is to flush the brake fluid regularly, every two to three years depending on where your vehicle is located. Keeping clean, water free, brake fluid is really important because the last thing you want is corrosive brake fluid to start sticking up the ABS valves. That’s really the only thing you can do, other than that you drive with it and go from there.

Mark: So I’ve been talking with Bernie Pawlik of Pawlik Automotive who just won another award as Best Auto Repair in Vancouver - 16 times now. If you are looking for service on your brakes these are the guys to call, book your appointment at 604-327-7112, they’ve got 5 bays open now or you can check out their website pawlikautomotive.com. Thanks Bernie