Audi Vehicles – How are they for Reliability? 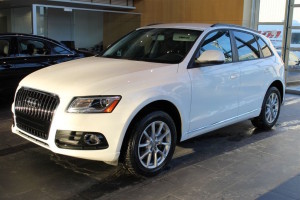 Mark: Hi, it’s Mark Bossert from Top Local Lead Generation. We’re here this morning with Mr. Bernie Pawlik. He’s a Master Mechanic in Vancouver BC and he’s the owner of Pawlik Automotive which is a very heavily award winning kind of auto service place voted by their customers 12 times in a row so far, as the best auto service place in Vancouver. How are you doing Bernie?

Mark: So we’re going to talk about Audi’s and I know that Audi is part of Volkswagen, for quite a while now but how much different than Volkswagens are they?

Bernie: Well, there are a lot of similarities between Volkswagen and Audi and you’ll kind of see them more in the high end Volkswagens and the low end Audi’s, the similarities between the cars are quite noticeable. The engine platforms are shared between the two brands and this can work to your advantage if you own a lower end Audi, you’ve got basically a Volkswagen car which maybe doesn’t sound so good but it’s fixed up inside, it makes it a lot nicer car. The great thing about that is you know the more cars a manufacturers sells that are similar, the cheaper the parts are so it keeps your repair cost down and the labour operation may still be expensive but the parts are cheaper so that ends up helping you out in the long run. Some of the models that are similar are the VW Passat and the Audi A4, they share similar platforms and in the SUV area which we’ll talk more about later, VW Touareg and the Audi Q7 are similar vehicles as actually is the Porsche Cayenne, they all share the same platform although there’s clearly some differences between all those models. You know while we notice the similarity’s too between Volkswagen and Audi it’s just the feel of the vehicles, the way their built, there’s a certain German Volkswagen Audi feel to them which you see even in a mid-grade Volkswagen right up to a high end Audi, you know the fit and finish is certainly a lot better in the Audi, there’s a lot more buttons and accessories and things so you certainly know you’re in a luxury car with an Audi.

Mark: So you recently wrote a couple of blog articles about Audi being cheap to repair and then expensive to repair so can you elaborate on that?

Bernie: Yeah, the point I was trying to make in the first article about being cheaper to repair is most people have this idea that European cars are expensive to fix and for a lot of part that’s true but sometimes they are actually extremely inexpensive to fix and the point with the Audi, you know, this particular vehicle had an engine misfire, quite a severe misfire, it had a bad ignition coil and the price of the coils they were so cheap and these were not some made in China cheap, you know, copies they were name brand German made parts, they were so cheap, I could buy four of them for less than the price of one ignition coil for my Subaru H6 so just because it’s an Audi or Volkswagen or Mercedes or BMW for that matter doesn’t necessarily mean that the car’s going to be more expensive to fix, sometimes it can be actually substantially cheaper than a Japanese or American car but then you know the same week with an Audi A4 the transmission control module went bad and it was a $3,000 repair so it’s things like that, sometimes they’re cheap, sometimes they are really expensive but just because it’s a European car or Audi for that matter doesn’t mean it’s going to be expensive to fix.

Mark: So, what sort of repairs do you find with Audi’s and today we’re going to concentrate here on the SUV’s.

Bernie: Yeah, generally they’re pretty good cars but there are a few things that happen with them. Volkswagen, Audi vehicles, they tend to have a lot of electrical and electronic problems so you’ll find that if you’ve owned them for a long period of time you have a few issues with those. The brakes on the like the Q7 they seem to wear out really fast, they’re expensive to fix, tires wear out very fast too. I’ve had a number of people who bought them have been sort of disappointed with how much money they spend on maintenance and repairs. They’re a big vehicle and I’m not certain with the brakes, why they wear out so fast. I see that with a lot of other European SUV’s as well like Range Rovers, the brakes don’t last very long and yet they’re absolutely enormous, based on the size of the brake, it is a big vehicle but based on the size of the brake they should last for 150,000 kilometres and I’m not certain what causes them to wear out so quickly but the fact is, they do and whichever brand of parts we use seems to all wear at the same rate.
Some of the engines in these vehicles are very well built, they’re good quality but the oil changes or maintenance service is expensive, it’s all synthetic oil which leads to longer oil service interval but it does add expense. I’m thinking, brakes, tire wear; if you own an Audi SUV you’re definitely going to be spending more money than you will if you buy a Lexus, say, you know, if you’re looking in the luxury SUV market; beautiful cars tho, for sure. The VW Touareg is very similar and the high end Touareg’s their fit and finish on those is quite nice, almost close to an Audi but the Audi’s are a jump ahead. I know we’re not talking about Porsche today but the Cayenne is the same; it’s built on the same platform but they got to take it to a whole new level with performance and speed and try to get the sports car feel to it.

But that’s basically a lot of what goes on with those vehicles.

Bernie: They’re good; these are a different model than we talked about TDI’s last week, they use a V6 diesel in the Q7’s and the Touareg’s as well. Really reliable so far, you know, that we haven’t seen a lot of problems with them so, I don’t have a lot more to say about them. They’re good and gives a nice option; you have a luxury diesel vehicle, that’s not much more I can say so far, we’ve seen very few problems with them.

Mark: Any last thought about Audi?

Bernie: You know Audi’s have come a long way, they used to be a kind of quirky, a bit of a quirky car going way back, you know as I’ve said before, written before, back around the late 90’s with the introduction of the A40 Audi brand really became a more mainstream, well-built vehicle and also way more popular so it was popular, that’s a good thing because they sell more of them and the cars tend to be built better. So any last thoughts? They are a great vehicle but you will, especially SUV’s, you will spend more money on those vehicle than you would if you owned a Lexus or even a large American luxury sedan, something like Cadillac Escalade; but good vehicle, very nice but definitely more expensive to repair.

Mark: Great. Thanks Bernie. So we’ve been talking with Bernie Pawlik of Pawlik Automotive in Vancouver. They’re an award winning shop voted by their customers 12 times in a row as the best auto repair in Vancouver. Give them a call at 604-327-7112? What’s the number Bernie?