Beware Buying A Rebuilt, Write Off Used Car in Vancouver 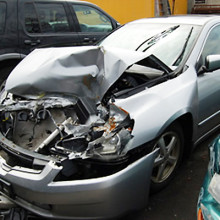 CTV’s W5 program did a recent story  on poorly rebuilt written off vehicles sold into the Vancouver used car market. Through my years of servicing cars I’ve seen several used vehicles that were truly bad. One was particularly memorable and worthy of a news program in and of itself.

Our story starts with a phone call from a gentleman who bought a 1 year old 2007 Chevy Cavalier. When I spoke with him he explained that he had just purchased this car and the check engine lamp was on and the transmission had a leak. Finding it unusual that a 1 year old vehicle with only 12,000 kilometers had these concerns, I told him that these would likely be covered by the manufacturer’s warranty. He explained that he had called them and the vehicle was “flagged” and there was no warranty.

He brought the car in and here’s how things unfolded: the car was a rebuilt write off (clearly indicated on his insurance papers) and so the manufacturer’s warranty was no longer valid. He paid $8,000.00 for the car which was a substantial bargain for this vehicle as most were selling for $12,000.00. We found that the vehicle had been in a front end collision. From the outside, repairs looked good but under the hood the body work was substandard. The check engine light was on due to the oxygen sensors being plugged together and not into the vehicle wiring harness.

Only someone with no knowledge of how cars work would do such a thing!

Fortunately this issue was easily rectified. The transmission leak proved to be more involved and required replacing the transmission with a good used unit. This was due to the transmission case being cracked from the collision. The sellers had tried in vain to do a quick and cheap fix with sealer.

The car ran well for a couple of months and then developed a rough idle. This was fixed by replacing the intake manifold: a plastic part that sits at the front of the engine. It had obviously been weakened by the accident and failed prematurely. 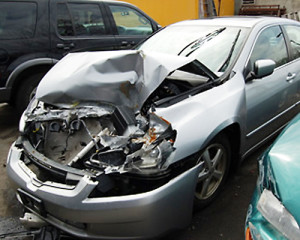 Written off vehicle. Is this the sort of previously damaged vehicle that you’d like to buy?

When the final repair bills were tallied up it came to about $4000.00 which now priced the car equivalent to what he would have paid for a very low mileage, non-rebuilt 1 year old Cavalier. And the one year old car would still have had a warranty.

So how can you prevent this from happening to you?

The best used cars are usually:

Are all rebuilt write offs bad? Certainly not. I have seen many that are fixed properly but there are a few things to note. They will always be worth less than a non-rebuilt vehicle. Many times the repaired body work or repaired components may fail early. I have one client with a Toyota Corolla that was a rebuilt write-off. While this vehicle has proven to be very reliable in the 12 years that he’s owned it, the left rear quarter panel that was repaired has paint that is cracking in an odd manor and looks bad. Clearly the paint work was very poorly done, though it looked great when he bought it.

The most important take away here is that buying a used car is very risky but the risk can be eliminated by doing your homework and consulting with professionals who know cars well. After all, you just want a good reliable well priced car and not to be a part of a news story.