Listen to the podcast episode here

Bernie: Doing very well. And actually I do want to add, I haven't told you this yet, but we're actually 22 time winners now.

Bernie: Thanks to our customers. So. Yeah. It's exciting.

Bernie: To share that with you and everyone who watches this podcast first.

Bernie: This vehicle had battery issues plus a few other things. The customer came to us, first of all, the battery required boosting every time. It wouldn't start. And also there's some transmission shifting problems and a couple of other things. But those were the two main concerns. And of course, with the transmission shifting, you know, the owner was thinking, well, is it worth doing anything with this car or is it time to say goodbye? So those were the things we looked at.

Mark: So what was causing the transmission to shift badly?

So let's just get right into a screen share here. So here's our 2005 BMW 320. I mean, it's an E46 chassis. BMW looks the same as pretty much all the other four door sedans of its type, depending on paint colour of course, and trim. But that's a, it's your standard. I call it your standard BMW. 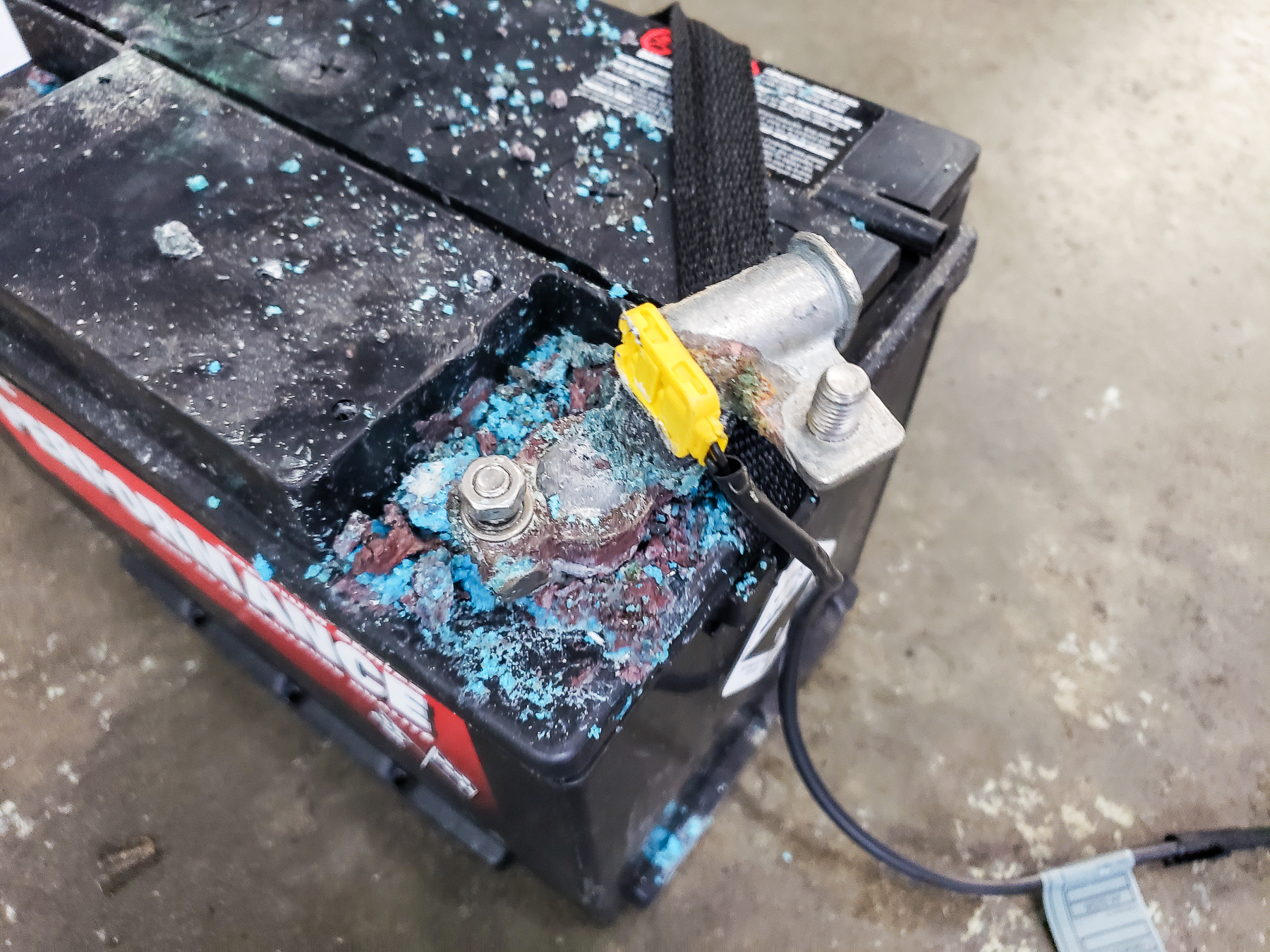 Mark: Okay. So what causes such beauteous corrosion to take place on a battery?

Bernie: Yeah, so this is interesting because this battery is located in the trunk of the vehicle and 99% of the time, like almost a 100% of the time when we go to look at a battery in a trunk, it's very clean.  You can't even almost tell the age of the battery, even if it's a 10 year old battery, because it sits out of the, you know, sits out of the elements of the hood out of the heat. It's actually a good place to put a battery really. It's not, it's a very unhostile environment, but this was kind of a surprise.

So what, you know, speculate as somehow, somebody, either the battery was defective or somebody you know, when they put the battery in, somehow broke the positive terminal and let acid leak out all over because this is basically an acid reacting with the metal that causes this kind of corrosion.

You can see this piece here, this is a current sensor. So these electrical systems are highly monitored in these cars. And with many modern cars. BMW may have been a little ahead of their time compared to some brands, but these vehicles are, they, you know, they monitor how much current is going through the battery. So the charging system and the rest of the electrical system can, you know, make choices and adjustments on how to manage the power.

So but you can see, just by looking at it, this is not a healthy thing.

Mark: It's not a healthy thing to put your hands on either.

Bernie: No. And we wear gloves for most of the work we do here. So, yeah.

Mark: So you said that this is the transmission problem was caused also caused by the battery. How, how is that possible?

Bernie: So these vehicles are very sensitive to the operation of the electrical system. And basically what we did in terms of the diagnostic in the vehicle, of course, before replacing the battery, we were able to a hook a booster up, road tested the vehicle, extracted a number of codes. Did a little research and found there's a technical service bulletin by BMW for issues relating to the electrical system and battery. You know, the part of the technical service bulletin, you know, puts notes about whether, you know, someone's installed some aftermarket electrical equipment that might cause inter electrical interference in the vehicle or to look at battery and battery cable issues. And of course we found this and we figured we were pretty much onto something.

Of course the only, you know, it was a bit of a gamble for the customer because transmission repair is very expensive. And the only way to really get the electrical system working properly, is to install a good quality battery which is a glass mat battery in the case of this vehicle, and they're generally expensive. And then replace that battery cable end, which is not a cheap item either. We were able to find a good quality used one. As I say, those things rarely ever wear out. So this was a good used part. We were able to come up with that and we replaced it and it all worked fine. So, that's basically how it all works. You need good electrical flow. Any interruption in current flow can cause the transmission to shift improperly.

Mark: So how did you diagnose that the battery was the causes of transmission problem?

Bernie: Well, the TSB was one of them, you know, and it's basically, you know, with a lot of the work we do, it's a step by step procedure. Some things are clear, some things aren't. But once we have a technical service bulletin from a manufacturer that says, if the battery is bad or something, you know, to that effect and it's causing this. I didn't say guaranteed to find the issue, but that's a good start for our repair. And that's what we did. If that hadn't done it, of course we would have been into actually testing the transmission and diagnosing, you know, the electrical system or that the actual transmission itself. But in this case, a happy ending for all. The battery fixed everything.

Mark: So how'd the vehicle work after you replaced the battery and cable?

Bernie: Yeah, it was really good. Of course it started fine. Charging system worked well. The transmission shifted like it was supposed to. No more trouble codes returned to the transmission module or engine module. It was all good. You know, the vehicle did need some other repairs, but they were, you know, brakes and ball joints and things like that. But nothing electrical or drive train related.

Bernie: Yeah. I shouldn't say it's a, at least in North America, it's a Canadian only model. I'm sure they sell them in other markets around the world because Canada's car market's pretty small. So that's the only thing about this car that can be a little bit of a pain, is it was only sold in Canada, in North America. So getting, finding, looking up parts is a little more difficult, but most of the items on the car are the same as the 325 model and  E46. They're all pretty much the same car, but of course the engine's a little different. It's a bit smaller, but pretty much the same. It was interesting because this car had California plates on it, but the owner had obviously bought it in Canada moved to California, came back to Canada. So it was kind of a, it would be even a more of a strange beast down in California.

Mark: So there you go. If you're looking for service for your BMW, even the rare ones in Vancouver, the guys to call are Pawlik Automotive. You can reach them at 604-327-7112 to book your appointment. You have to call and book ahead. They're always busy. Or check out the website, pawlikautomotive.com many, over 600 articles on there about all makes and models of cars repairs. YouTube channel, Pawlik Auto Repair, over 350 videos on all makes and models of cars and all kinds of repairs. And of course, if you like what we're doing here on the podcast, give us a like on Apple podcast, we'd appreciate it and thank you for watching and listening. Thanks Bernie.