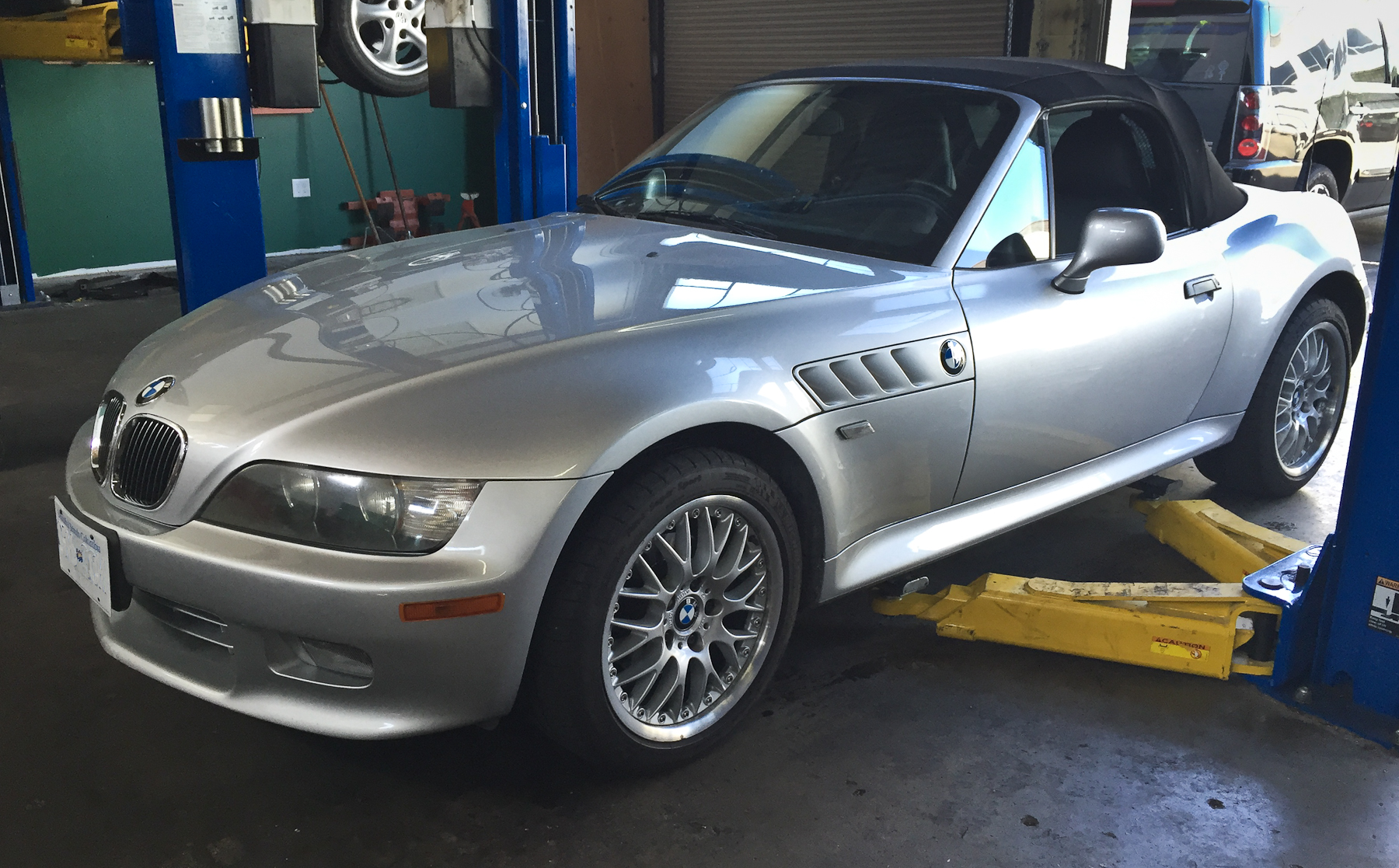 Bernie: With this vehicle, nothing in particular other than the owner wanted a transmission flushed based on the age of the vehicle. This is a Z3 convertible, it’s a second car for the owner, it’s a pleasure vehicle, takes it on some trips here and mostly in the summertime. It's a beautiful convertible, a lot of fun to drive and it has very low kilometers, only about 75,000 kilometers which is really low for this age of vehicle but the transmission fluid had never been serviced so he wanted it done.

Mark: So was the fluid really dirty?

Bernie: Not particularly, a little discoloured as you would expect from usage on a vehicle like this but yeah, not particularly dirty.

Mark: So is transmission fluid replacement something that BMW recommends for their vehicles?

Bernie: Well they actually don’t. They’re very adamant about it in fact; I’ll share a couple of photos with you here: adamant to the point of placing this sticker that’s on the bottom of the transmission; which says, "warning no oil change or top off necessary, lifetime transmission oil fill". They also warn you other fluids will cause non warrantable transmission damage. Now I mean it’s not rocket science to get the right kind of fluid and they have part number for the fluid on the bottom or it says Dexron III. Interesting thing about Dexron III is that is your regular type of transmission fluid that has been used on cars for years and years and years. I’m just going to cancel the screen share. 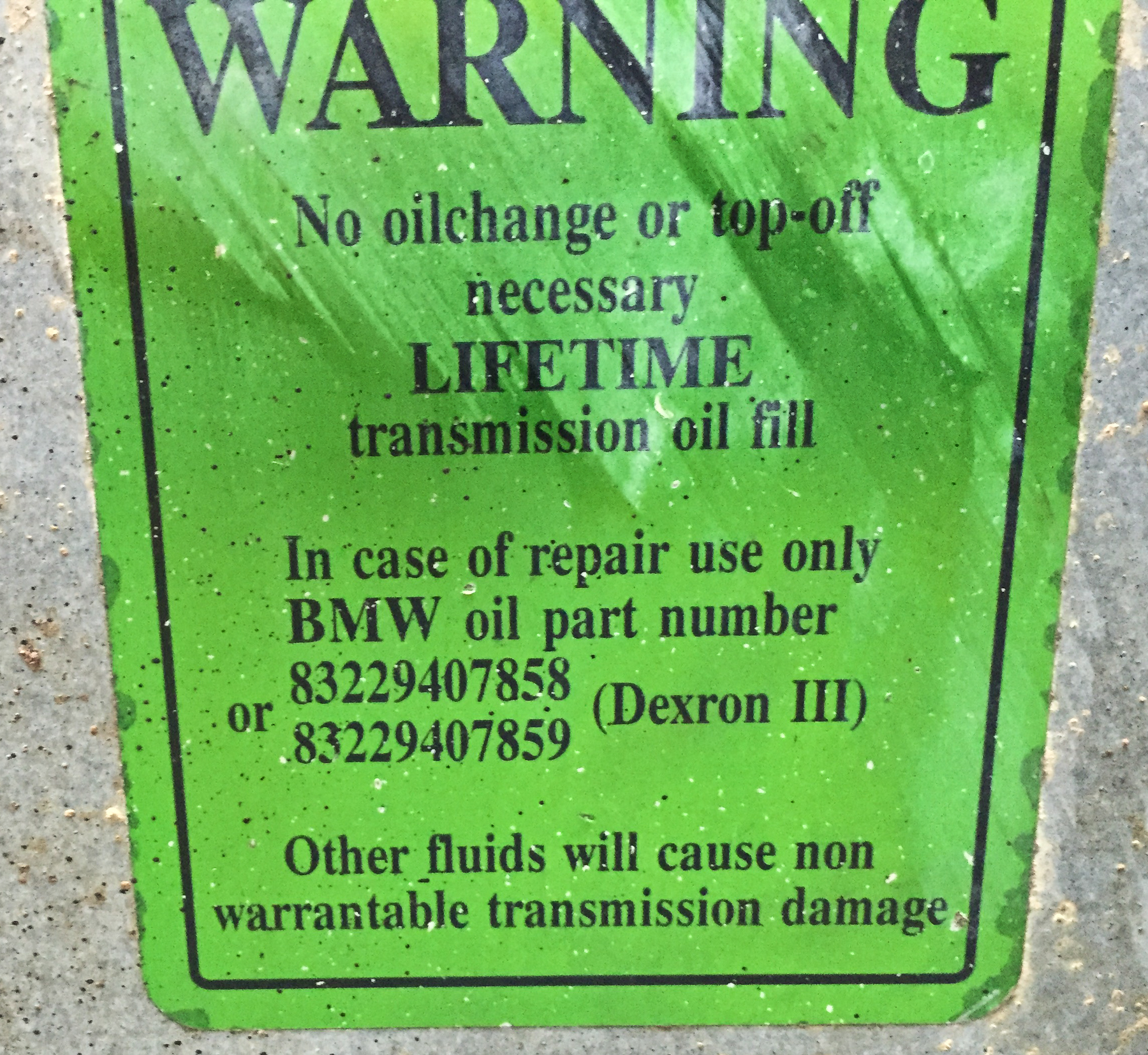 Warning label on transmission found on many BMW vehicles

Mark: Yeah, you did

Bernie: So Dexron III has been used on automatic transmissions for years and years in American cars, Japanese cars, many European cars up until around the early 2000’s and many, many manufacturers recommend transmission flushes but BMW doesn’t.

Mark: So why would they not recommend it when other manufacturers do?

Bernie: The whole idea behind it is to present the consumer who’s buying the new car with a very low maintenance cost, you know they can say "this is what it costs to maintain this car you know over the next five years, you need to change the oil, we need to do this and that but the transmission fluid off the list," it keeps the maintenance cost on the car down so they can advertise that as being a benefit to owning a BMW. Now it depends on what you want to get out of your car, I mean do you want to keep your car for five years, if that’s all you want to do is buy a new car and keep it five years, great, don’t worry about the transmission but if you’re going to keep a car for ten years, fifteen years, and really get the most money out of the car by doing a transmission service here. It is really a worthwhile thing to do.

Mark: So does changing the transmission fluid make any difference to how it shifts?

Bernie: We never like to say that doing a transmission flush is going to make a difference, but sometimes it does, and in the case of this BMW with very low kilometers with fluid that wasn’t really all that dirty the customer called me back and said his transmission shifts a whole lot better: was way smoother with snappier shifts. So it actually does make a difference sometimes, in spite of what BMW says about never changing the fluid. We’ve had customers with Volvo’s who’ve had some shifting problems where changing the fluid has made a difference, again I don’t recommend it if there’s a problem but often it can make a difference.

Mark: So the results are variable. What does your shop do when doing an automatic transmission service?

Bernie: Well we always do the most thorough service possible and replace as much fluid as we can. There’s really two kinds of transmission fluid services. One, and it depends upon the kind of transmission: some transmissions do not have a transmission pan and they don’t have a filter so in that case we drain the fluid, then we hook up our flushing machine and we just simply flush the fluid. The machine pumps in new fluid and with the vehicle running the machine allows the old fluid to pump out so it basically replaces pretty much all the fluid in the transmission. That’s the simplest kind of flush. On vehicles such as this BMW that have a removable pan and a replaceable filter we will remove the pan, we replace the filter, we clean the pan. We look for any debris inside the pan: if there’s a bunch of metal filings, well that’s a bad sign, probably not worth even continuing to flush, if it’s bad. We rarely run into that; then we replace the pan gasket the filter and then we hook up the flush machine and then we flush the fluid out from there, so it’s a real thorough service.  As for for price: there’s a variety of prices that various shops charge but to do a proper flush is time consuming, it does use a lot of fluid. Costs are anywhere on average 2 to 4 hundred dollars depending upon the car, the type of fluid  and on some vehicles, Land Rovers and Range Rovers for example, they have an integrated pan, filter and gasket, it is very expensive and time consuming and that could be a 6 to 7 hundred dollar job but it’s worth doing it right to make sure it’s done properly.

Mark: If you want to extend the life of your vehicle this is the way to make sure it happens basically, is that right?

Mark: So any other thoughts on automatic transmission service?

Bernie: Basically every vehicle needs one from somewhere between 50 and 100 thousand kilometer range; whether the manufacturer recommends it or not it’s a good to do. The key thing with a lot of these maintenance recommendations from a lot of manufacturers is that most components use the same kind of fluids, the vehicle is driven in the same kind of conditions and different manufacturers have different ideas on what you need to do but transmission flushes should be done on every vehicle.

Mark: So if you want to maintain your vehicle the guys to see, as you can tell Bernie is pretty passionate about making sure your vehicle is running for a long time and as trouble free as possible. These are the guys to talk to Pawlik Automotive in Vancouver, you can reach them at 604-327-7112 to book your appointment, they’re busy so be prepared, you might have to wait a little bit or check out their website, tons and tons of information on there pawlikautomotive.com. Thanks Bernie.