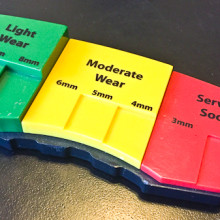 Are your brakes are making noises? Bernie Pawlik of Pawlik Automotive explains the different noises your brakes can make. If you hear unusual noises, such as grinding, squeaking, squealing or rubbing get your car in immediately for an inspection.

Mark: So brake noises - my brakes are making noise, what does it mean?

Bernie: Excellent question. Brakes can make a variety of noises from squeaks and squeals to grinding noises and a few other interesting sounds as well. We'll start with grinding noises. Grinding noises are usually the most serious noises because that indicates that the brake pads (I’ll use disc brakes for example) have worn out completely and they’re now at the backing plate which is steel and they are now rubbing against the brake rotor which is also steel, causing a very loud grinding sound. Here’s an example, this is a little demonstration piece that we have that we show our clients, it shows different thicknesses of brake pads. You can see the red at the top is a very thin pad and on the bottom, green is thick when the brake pad is new and there’s the black piece is the backing plate, so that’s an example of what happens when it goes metal on metal, it’s gone beyond the red part, it’s now metal on metal. 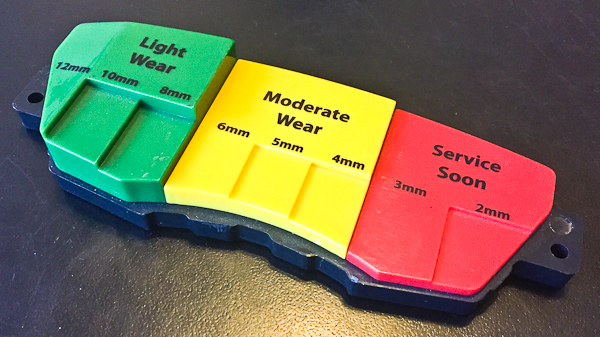 Sometimes grinding noises happen and they’re actually not worn metal on metal. We’ve had cars where we drive them and they sound awful and there’s actually nothing really wrong with the brakes other than making a noise. That can be due sometimes to the material that the brake pads are made of, somehow the pad material has changed composition or something about the way its worn is causing it to make a grinding noise. It’s not very common. Generally those are the causes for the grinding noise.

Mark: So are all noises serious?

Bernie: Well no, they’re not. Some of them, the next noise we’ll get into, squeaks and squeals are sometimes an indication that your brakes are worn out and sometimes they’re not. I’ll talk about what you need to do about the noises in a minute but we’ll just go through the noises. Squeaks and squeals are sometimes a natural occurrence with brakes. The way a brake works, if you look at a brake disc, it’s almost like a record, an old fashioned record, if I can actually use that term “old fashioned” but it’s like a record and the needle plays in the record groove and that creates a certain noise; brakes are similar in that way. There’s a lot of science that has gone into preventing brake noise. It used to be a much more common problem than it is now. Generally, we run into very few problems, but we used to do a lot of work to prevent brakes from being noisy. There were silly things like elastic bands that would go between the brake pads and a special goop you’d put on the back of the brake pads, but nowadays it seems like the science has worked it out pretty well. We still do get some squeaks but - the point I’m making here is that squeaks can be a very natural part of brakes. Sometimes annoying. If they’re not too bad, I would suggest leaving them if the brakes have good material on them. But it’s worth looking at the brakes to find out whether the squeak is actually something serious because as brakes wear they can also squeak and it can indicate your brakes are worn out. Same with squeals - same thing.

Now there are normal brakes squeaks that we hear when you apply the brake like a high pitched "eeeee" sound, and sometimes these will happen all the time when you’re driving down the road and then when you put the brake on sometimes it gets worse or it will disappear. These are generally caused by the brakes squealers which are put on the brake pad to indicate that your brake pads are about to wear out. So it’s important to heed that warning.

Mark: So, are there any other noises?

Bernie: Well, we actually had an interesting noise a couple of weeks ago, the owners had their vehicle towed in because the noise was so severe. It was a Ford Ranger pick up truck. She drove around a sharp corner and all of a sudden the brakes started to make a horrendous noise. Driving the vehicle into the shop the noise was like the sound of a freight train going by with the brakes on. It was just the most awful noise. We removed the wheels and had a look and found a little rock stuck between the brake backing plate and the brake rotor which set off a vibration between the rotor and the brake backing plate and I mean honestly, it was the most horrible noise you can imagine but really it posed no safety concern whatsoever.

Mark: So that covers it. So what should I do if my brakes start making a noise?

Bernie: The most important thing to do when your brakes start making a noise is bring it in for an inspection. Have it looked at to see whether the noise is in fact something serious because as I alluded to during this talk, some noises are serious and some aren’t. If you really just don’t want to hear any noise, you can get the brakes fixed but sometimes, you may have brakes that have a lot of life left in them and they’re just making a noise. But it could also indicate that your brakes are worn out and by bringing it in immediately for an inspection, you can save you a lot of money and keep the safety of your vehicle top notch. So get it inspected, that’s the key!

Mark: So we’ve been talking with Bernie Pawlik of Pawlik Automotive in Vancouver. If you want to book your inspection of your brakes give them a call 604-327-7112 or check out their website pawlikautomotive.com