Today's featured service is engine and transmission mount replacement done on a 2006 Acura TL brought to us by a client from Surrey BC.

This service was very interesting for one reason: all 3 engine mounts and all 3 transmission mounts were broken. What is even more amazing is that this vehicle has 6 mounts in total while most cars have only 3 or 4. In spite of this added reinforcement things still came apart. Most engine mount failures are noted in a car by a vibration or shake. Sometimes it's a clunk when accelerating or decelerating. As you might expect with this car it was much worse. When you shifted the gears from reverse to drive there was an exceptionally loud bang in the car. This was caused by the engine and transmission jumping around in the engine compartment. This is a very serious condition and one that can cause a lot of damage. It was a small miracle that this vehicle seemed to have sustained no further damage. Let's looks at the engine mounts. In this photo we see all the mounts laid out in their approximate positions in the engine compartment. The engine mounts are on the right and the transmission mounts are on the left. 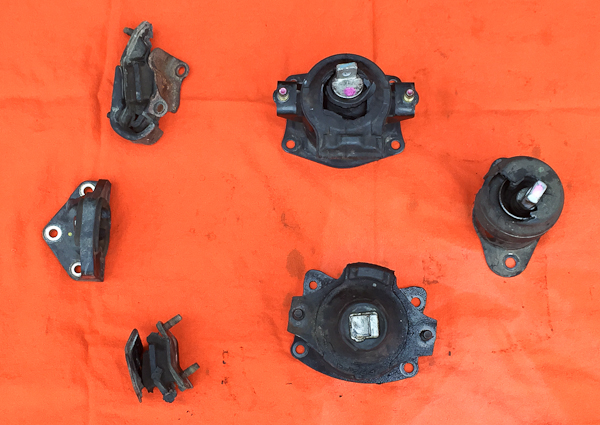 Engine mount on right and transmission mounts on left

In this photo I have taken the broken sections of the mounts out so you can see the difference. I can't stress enough how unique this condition is. Having one mount broken apart happens but to have every mount broken is unheard of. 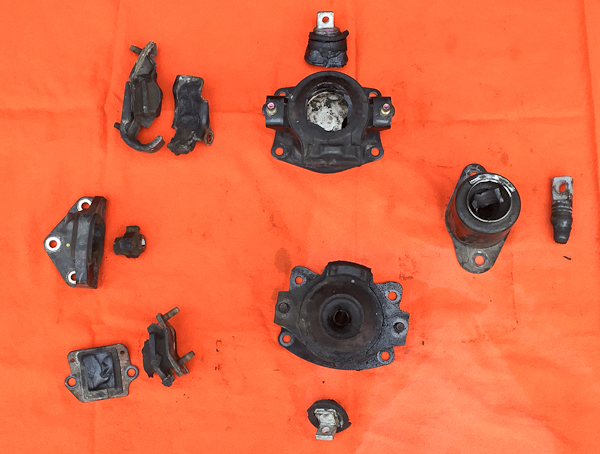 Here's a view of the right side mount first together and then taken apart, the small core piece in the middle was attached to the outer shell by very strong rubber which has been torn apart. This shows how this part is constructed: they all have metal end that bolt to the vehicle body and the engine or transmission and are connected with very strong rubber bonded in between. Some also feature an oil filled section to further cushion the vibrations from the engine. 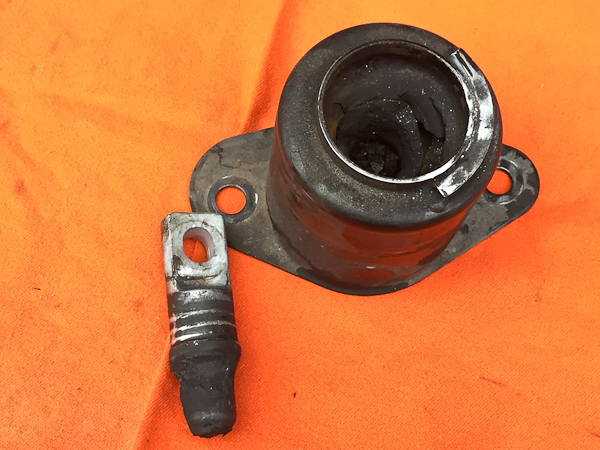 So there you have a brief education about engine mount, especially broken mounts. How long this vehicle had vibrations and clunks is hard to know but I suspect it had been a long time. Likely the owner or drivers of this vehicle drove it very hard.

As I said previously broken engine mounts can cause some very serious and expensive damage. Fortunately for this vehicle owner the mounts were it. He was lucky.

For more about the Acura TL click here https://en.wikipedia.org/wiki/Acura_TL