Over the years we have serviced many GM and Chevy trucks and rightly so as there are so many on the road. 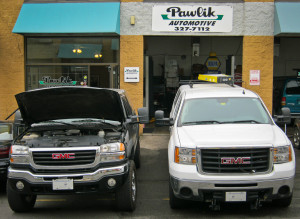 No manufacturer has made a larger range of light truck models from the S10 small pickup; to the practical Suburban which is a half pickup truck, half family hauler and the original SUV; to tough K3500 Diesel pickups; the G series Van and the P series Step Vans. And we can’t forget the Safari/Astro vans: a very practically sized van for work or a people hauler (surprisingly GM stopped making this very popular model).

As for reliability GMs are a mixed bag: all are fairly durable with some being exceptional and others poor. Sometimes these vehicles have exceptional strong points along with weak points.

One area of weakness that comes to mind are the G15 and 25 series vans from the late 1990’s and into the 2000’s. These vans feature very small front brakes for a truck that is capable of handling heavy loads and because of this they wear out very fast. We frequently see cars with larger brakes! Other areas of concern are intake manifold gasket leaks and the horribly problematic CPI fuel injection system that fails frequently and costs a great deal to fix (There is now a replacement CPI unit that eliminates all of the problems in this system).

The C and K series pickups and the Suburbans from the 2000 model year and on are awesome. I personally own a 2001 Suburban now with 200,000 kilometers and have had few problems: it’s been a great vehicle and I see the same with the Pick-ups that we service.

In the past the S10 trucks had engine problems but much of this may be due to the 2.8 liter engine which was really too small to be used for truck purposes (and that is many model years ago and not much concern today).

As for the diesel trucks GMC and Chevy’s have had a rather poor reputation though this has changed with the Duramax engine. The old 6.2 liter diesels from the 1980’s were poor and were slightly improved with the 6.5 litre engine, but they have always been a very poor choice when compared to the Dodge Cummins diesel and the Ford Diesels (except the 6 and 6.4 liter units).

Overall I’d rate the Chevy and GM trucks quite highly but if you do plan to use it as a tough truck (constantly hauling lots of weight) it would be worth looking at the truck’s construction or consult us to make sure that it is up to the task for which you intend it.