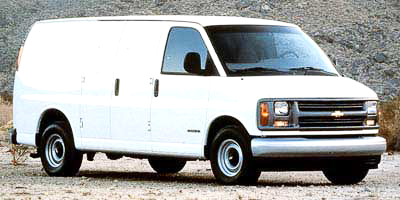 Today’s featured service was performed on a hardworking 97 Chevy Van with 260,000 kilometers. The vehicle serves as a carpet cleaning van, and consequently has a lot of engine run time due to operate the large carpet cleaning machine. Several driveability concerns were present with this van requiring two stages of diagnosis to return the vehicle to a good state of repair.

I consider this to be a complex diagnosis: complex because it takes the repair of one thing to reveal other underlying issues. Complex diagnosis is fairly rare and occurs about 5% of the time, but it happens almost exclusively with neglected vehicles. Our featured van was one such example, but not the fault of the current owners for they had just purchased the vehicle.

Let’s look at our featured Chevy van: as I mentioned this vehicle was recently purchased and while out driving to a job it lost power and wouldn’t climb hills well. They were able to drive it to the shop and we proceeded to perform diagnosis. On our road test it seemed likely that the lack of power might be due to the engine being starved for fuel. We connected a fuel pressure gauge and verified that the pressure was below spec. We also noted that the fuel pump volume was very low: the engine was starving for fuel and we traced this to a worn out fuel pump.

The pump was replaced and while at it we also replaced the fuel filter. This was found to be partially plugged. Here was the first sign of neglected maintenance. The pump failure was more than acceptable given the age and mileage of the vehicle however had the filter been changed sooner the pump may have lived a longer life.

After pump replacement the engine started right up and driving it was a treat: there was lots of power. The next day however the engine wouldn’t initially start but eventually did, and it appeared flooded. We assumed that perhaps the engine computer was injecting too much fuel with the pump now working properly. Engine computers adapt to different conditions and sometimes take a few days of driving to readjust. 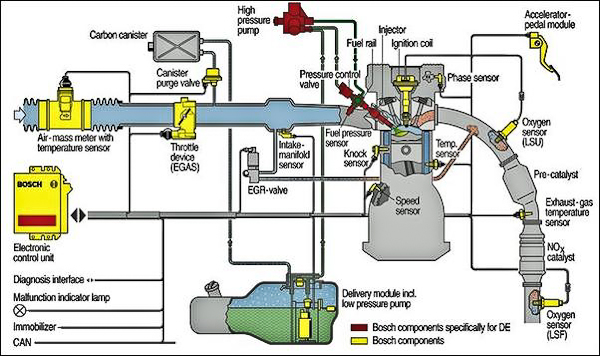 Modern gasoline fuel injection system diagram. Note the numerous sensors and components. All of these and potential failure items.

Going forward a couple of days the van had starting problems and we towed it back to our shop to rediagnose it. Our first test was to verify that our new fuel pump was not the problem and it was not: fuel pressure was good. Unfortunately the van started up after being towed to our shop so we had to drive it for a couple of days and let it sit until the symptom reoccurred. This added another level of complexity to the diagnosis: when a concern is intermittent we need to test the vehicle when the problem is occurring to be sure that we find the cause.

After this two part diagnosis and repair the van runs great, and I’d like to leave you with a two important points:

1- Most vehicle diagnosis is a straight forward procedure if you address it quickly after the concerns start. It is often more complex when left and the vehicle is neglected. Performing routine maintenance: replacing fuel filters & spark plugs at the recommended interval is critical and will increase vehicle reliability and reduce diagnostic costs. When buying a used vehicle there may be repairs involved to deal with the previous owner’s neglect. This is often found in a prepurchase inspection.

2- With a diagnosis like this it is very important to trust the shop that you are dealing with and be sure they are trust worthy. If you don’t understand why you have to do multiple repairs be sure they are able to explain what is happening. A car or truck is a very complex machine and many things can and do go wrong: sometimes simultaneously and at other times in rapid succession. Some problems, once repaired will reveal other underlying issues.

For more information about the Chevy Van click here https://en.wikipedia.org/wiki/Chevrolet_Express