Do Airbags Have a Limited Lifespan?- Pawlik Automotive Repair, Vancouver BC
0

Do Airbags Have a Limited Lifespan?

Many cars have large warning labels inside stating that “your airbag system must be inspected by the dealer when 10 years old.” Just what does this mean and how important is heeding this warning label? 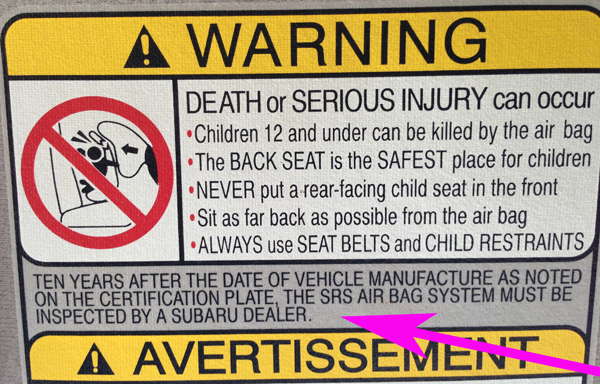 Airbag system warning label as found in 2001 Subaru Outback. How important is it to heed this warning? On this car, as long as the warning lamp goes off a few seconds after start up then it’s all systems go and not likely needing any dealer inspection.

To cut to the chase, it is probably not something that you need to worry about, however, I have compiled some information about your airbag system that you can use to educate yourself on the subject.

First, lets look at your airbag or supplemental restraint system (SRS) as it is frequently called and how it works. Airbag systems consist of: crash sensors placed in strategic locations throughout the vehicle; a central control unit; the airbags themselves and seatbelt pretensioners. The airbags and pretensioners are activated by an electrical signal, sent from the control unit during a collision, which triggers explosive charges instantly deploying the airbags and tightening the seat belts.

The supplemental restraint system has evolved from early days when vehicles had only one airbag protecting the driver. They were installed only on expensive luxury cars with the exception, that in the 1970s, Chevrolet sold some Impala models with airbags as a very rare option. Moving to today, all cars have airbags for both front occupants, and many vehicles have multiple side airbags and rear seat airbags. Working with the airbags are seat belt pretensioners which pull your seat belt tight when the airbag is activated.

Your airbag system is rather like disability or critical illness insurance: it is something you hope to never use, but if you do, it needs to work.

So what goes wrong and what about the 10 year warning? First lets look at what can go wrong. The airbag system has many electrical components and these are continuously monitored by the control unit. If any concern occurs it will illuminate the warning lamp on your instrument panel. Should this light remain on after vehicle startup, it is likely that your airbags will not deploy in the event of a collision. What is not monitored are the explosive components of the system.

SRS or Airbag warning lamp. This light looks different on many cars.

What can be known for certain is that if your airbag warning lamp goes out after you start your car then all electrical components of the system are functioning properly. What is uncertain is whether, after many years, the explosive components in the airbag and seatbelt pretensioner will work. The only way to be 100% certain would be to replace them, however, this would be an extremely expensive procedure costing thousands of dollars.

While researching the subject the consensus seems to be that the explosive portion of the airbags are made to last for a long time. An experiment was done where they crashed a rusty 1972 Impala and the air bags deployed as designed. Similarly no airbags installed in the early 1990s have failed to deploy properly in a collision (as long as the system was functioning properly)

While I would encourage you to do your own research, my thought, and this is only my opinion is that if your air bag warning light is out, it is all systems go. If you really want the ultimate in safety in a ten year old car you could replace the airbags and pretensioners, however that would cost as much as a large down payment on a new car.

Click on this link for an excellent article on the subject http://goo.gl/sB1kgp