Don’t Rely on the Warning Lights on your Dash

Bernie: Yes, absolutely! This post was inspired by a 2003 Toyota Matrix that just came in for a maintenance service yesterday. A regular customer, very good customer, intelligent person, came in for a routine service, I asked him as I usually do, do you have any concerns? Yes I have two, there’s a couple of noises, one of them will be an engine noise that happens under certain circumstances: so I wrote down the notes, wrote up a work order, passed it to Matt our technician. He started the engine, drove it around the block and came back a little concerned because the engine was making a lot of rattling noises and the low oil warning light on the dash was flickering on and off.

Mark: So what did you find was the cause of all that noise?

Bernie: Well the engine was extremely low on oil. The owner, when I mentioned the low oil stated that he never saw the oil light come on. I said it did for us so maybe it just reached that critical level but I’m going to share a photo here with you and this is the oil that we drained out of the engine. That is a 4 liter bucket and this engine has a 4 liter oil capacity and that’s how much oil we got out of it which is about, looks like I’d say less than half liter so these engines are designed to run on a certain amount of oil, usually you could go a liter low and you’re still safe so you could have that bucket three quarters full and still be running a safe engine but that low is really, really bad. 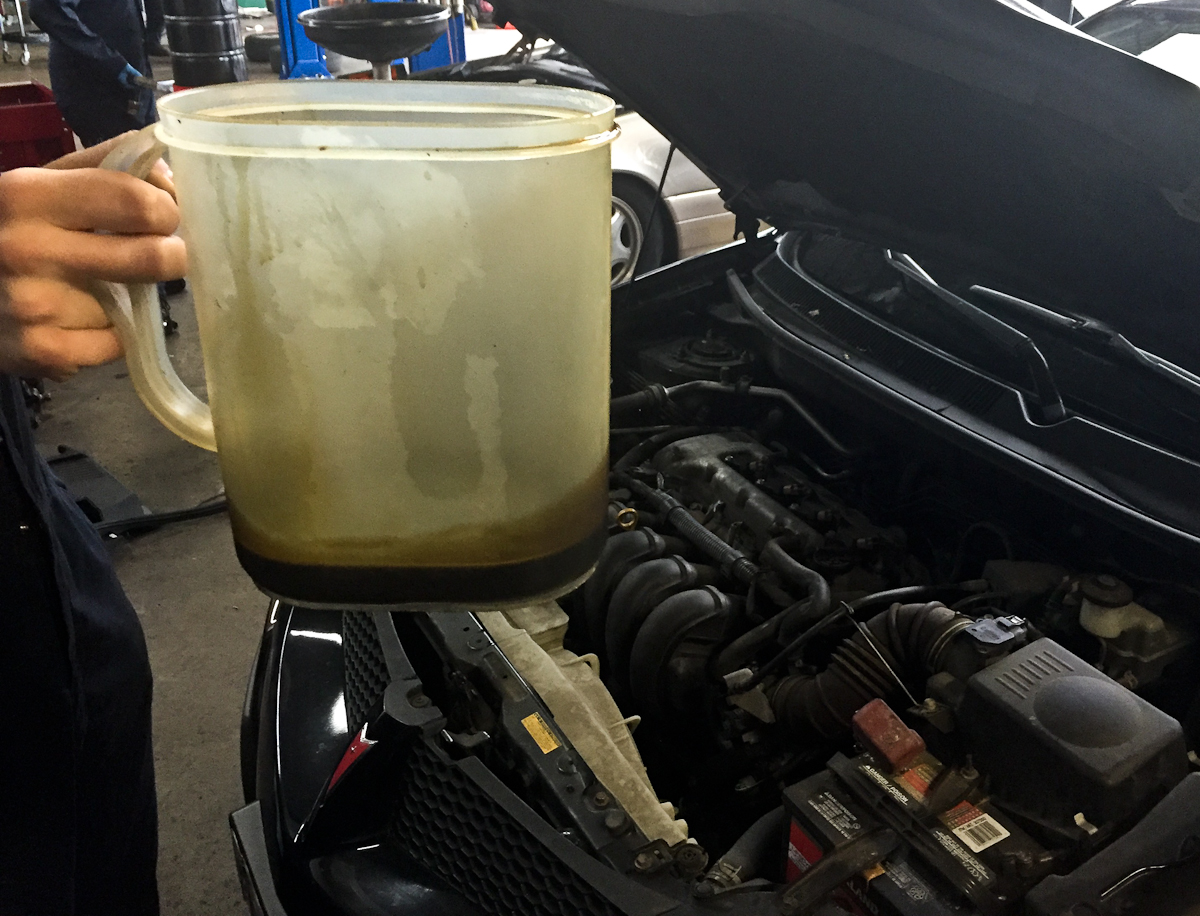 This is all of the oil that we drained out of this engine: that pail should be full!

Mark: So what did you think, how could the engine be so low on oil and the owner not know it?

Bernie: Well a couple things, first off all engines burn oil, it’s just something that happens. Now sometimes an engine will burn so little oil that you could drive 20,000 kilometers and you never have to add a drop but that’s usually the exception. It’s normal to burn oil, even a liter every thousand kilometers is still within the specification on any engine. So how would the owner not know it, basically the only way you don’t know it is by not checking the oil yourself, that’s really the only thing you’ve got to do and I recommend to people every 2nd time when you go to fill up your tank, pull the dipstick, check your oil, that’s the best thing to do and I have to admit I’m guilty of not doing it myself sometimes but it is critical to check that because engines burn oil, they leak it, and usually you can see leaks on the ground but if you don’t see drips the engine is burning oil.

Mark: So are there warning lights on the dash for low oil?

Bernie: Well, yes and no and this is where you really have to know about the car that you own. You need to know, does your car have a low oil warning light, some do, some don’t. I’d say probably 30 percent of cars on the road have a low oil level warning light and the other 70 percent do not have that light so you need to know that. I have an older suburban, a 2001 suburban, it has a low oil warning light so when if the oil gets about a liter low a light comes on in the dash that says that you need to add oil; which is awesome and I trust that. A lot of European cars don’t even have dip sticks, like the fancier European cars, BMW’s, there isn’t even a dip stick so you have to rely on that light, it’ll come on and it’ll tell you but you need to know if your car has this light or not. When I mentioned to the Matrix's owner about the severely low oil his response was" well the oil light never came on." Many people have an assumption that all cars have a low oil warning light but they don’t, they have this light. . . and I’m going to share a photo with you here. This light here, this is a dash view of a Subaru dash and that is the oil light that you’ll find on a generally like older Subaru’s and possibly even brand new ones, I don’t know but that is very typical of many cars, most cars have that light, it looks like an oil can with a little drip on it. That light is the oil pressure warning light and that is usually the only oil warning light that you will find on most cars. What it is there for is to tell you that the engine oil pressure is too low and it’s really meant to indicate that there’s a catastrophic oil failure problem in the engine not that your engine’s low in oil. The only time you really want to see that light come on is when you turn the key to the on position, all the dash lights come on, that oil light should come on telling you that the light actually works, the system works, as soon as you start the engine that light should go off within a second, if it stays on or if it flickers on you need to bring the car in for service immediately, but the first thing to do is check your engine's oil. So without rambling on too much basically get to know what kind of car you have, does it have a low oil level warning light or does it not have the low oil level warning light. By the way every car has this low oil pressure warning light in some way shape or form. 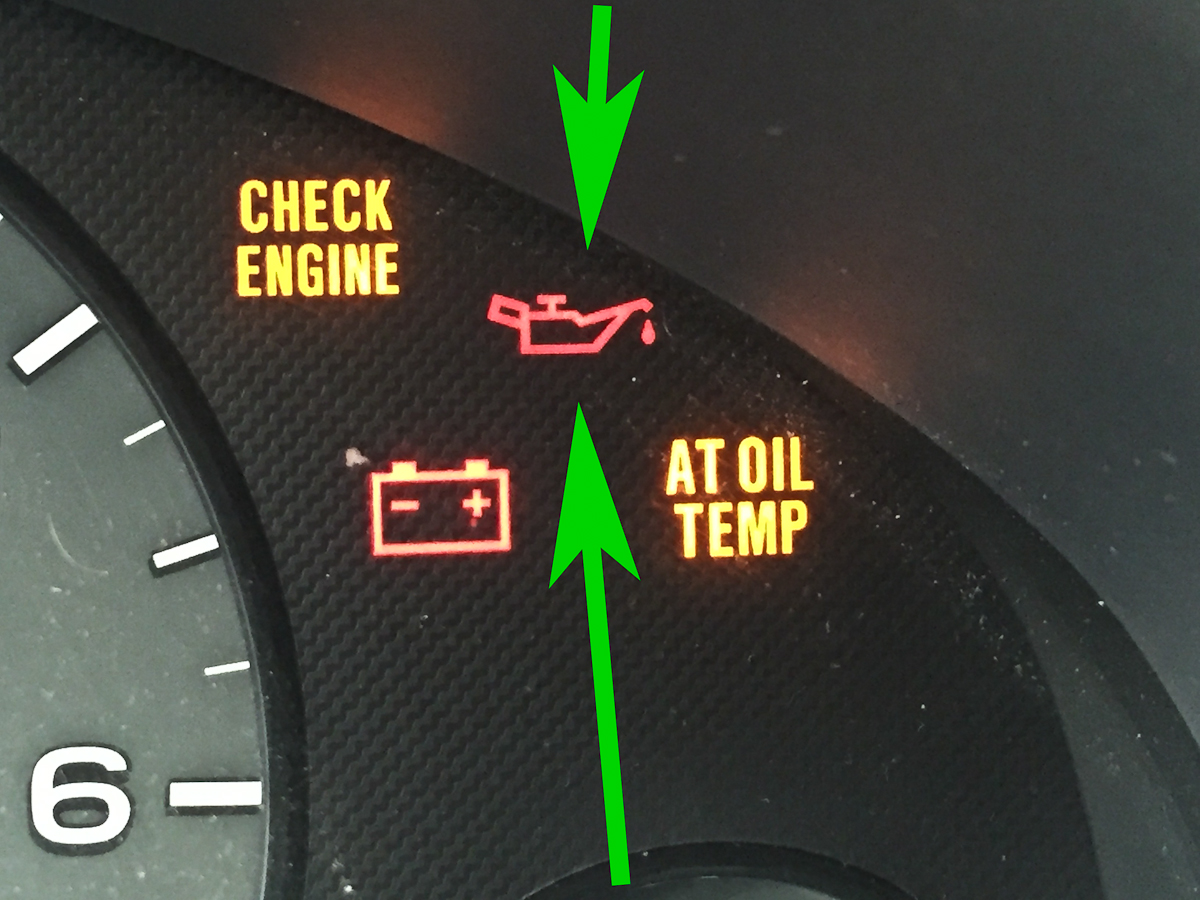 The green arrows point to the low oil pressure warning lamp. This is not a low oil level warning lamp but an indicator that oil is not being pumped through your engine.

Mark: So is keeping the oil full even more important on the higher tech engines we have today with variable valve timing and multiple cams and multiple valves etc.?

Bernie: Absolutely, it is absolutely critical and it’s scary when I think of the technology in a modern engine that is so reliant on having full oil and quite often we’ve had cars come in with a check engine light on and scanned it, done some diagnosis and found the actual cause of that light coming on was actually low engine oil because variable valve timing system relies on a proper flow of oil to operate the actuators to the variable valve timing system and so it’s a bit of a good early warning but again you don’t want the stuff to happen. It’s just so much more expensive, it used to be an engine with pistons, cam shaft, rocker arms, an old fashioned V8 for instance, a lot less moving parts in them than a modern engine, even a Toyota Matrix which is not a really high tech car, it has a timing chain, overhead cams, it’s complex and even the cheapest car you buy is incredibly complex, it’s like a Ferrari of 30 years ago for complexity so you really, really want to make sure your oil’s full, more important now than ever.

Mark: So, check your oil every 2nd fill up or go call these guys, they’ll look after you; 604-327-7112 Pawlik Automotive in Vancouver, check out their website packed with information, pawlikautomotive.com. Thanks Bernie.