Mark: Hi, it's Mark from Remarkable Speaking. I'm here with Bernie Pawlik, Pawlik Automotive in Vancouver. Vancouver's best auto service experience, 24 times they've been voted Best Auto Repair in Vancouver by their customers. And today we're talking cars, a Ford Transit. What was going on with this vehicle, Bernie?

Bernie: Yeah, so this is one of those little mini Transit connect vans and the owner of the vehicle had brought it in with a complaint of some pretty severe vibrations in the vehicle. Mostly when the engine was running. Not so much driving, but with the engine running. So that was the complaint.

Mark: So where do you go to test and diagnose what's actually happening?

Bernie: Basically the diagnosis is based on symptoms. And for something like this with a vibration, with the engine running, we kind of suspect engine mounts or some sort of drive train issue, maybe transmission or axle or something.

But when a vibration is prevalent, when you're just idling and the vehicle's in gear, it's usually pretty indicative of an engine mount problem. So that's where we focused our diagnosis.

Mark: So I know engine mounts can be buried pretty hard to find sometimes. How do you inspect the engine mounts?

Bernie: Yeah, they are often buried but you can usually see signs of them. So one sure fire way is to load the engine up. So you basically put the vehicle in drive, you put your left foot on the brake and you put your right foot on the gas pedal, press down pretty hard. You have someone under the hood just looking if the engine's torquing or twisting or moving. And switch from reverse to drive doing the same thing. And then do it in drive, do it in reverse. And you can see whether the engine's jumping around or moving.

I mean, sometimes if they're really bad, the engine will actually leap up a couple two or three inches in the engine compartment, you know you've got a problem there. But you can usually see that. Visual inspection too. I mean, just to look for cracks and tears in the engine mounts, a lot of them are made of rubber.

We'll look at some pictures in a minute. You can see some of the visual things. So it's a combination between visual and that, sort of just torquing the engine to see what happens. And you know, often you can feel it or hear it. Sometimes you can actually see the engine vibrating or rubbing against some part of the body, in severe cases.

Mark: So what sort of a job is it to replace the engine mounts? You almost have to take the motor out, don't you?

Bernie: No. There's just things to remove you know, to access the engine mounts, but it's not too bad on this vehicle. I mean, some are worse than others. Usually you have to lift the engine up in some way or support the engine and then remove the mounts. This is a transverse style engine and often not as difficult as some longitudinal mounted engines just based on access. But anyways, let's look at some pictures.

So there's the under hood view of the Transit connect. The engine over here where my mouse is swirling around, battery here. So there's a transmission mount located under this area here where I'm kind of spinning my mouse pointer. And then over on the, it'll be the right side of the engine compartment. Left is, we're looking, is the this is the main engine mount over here. 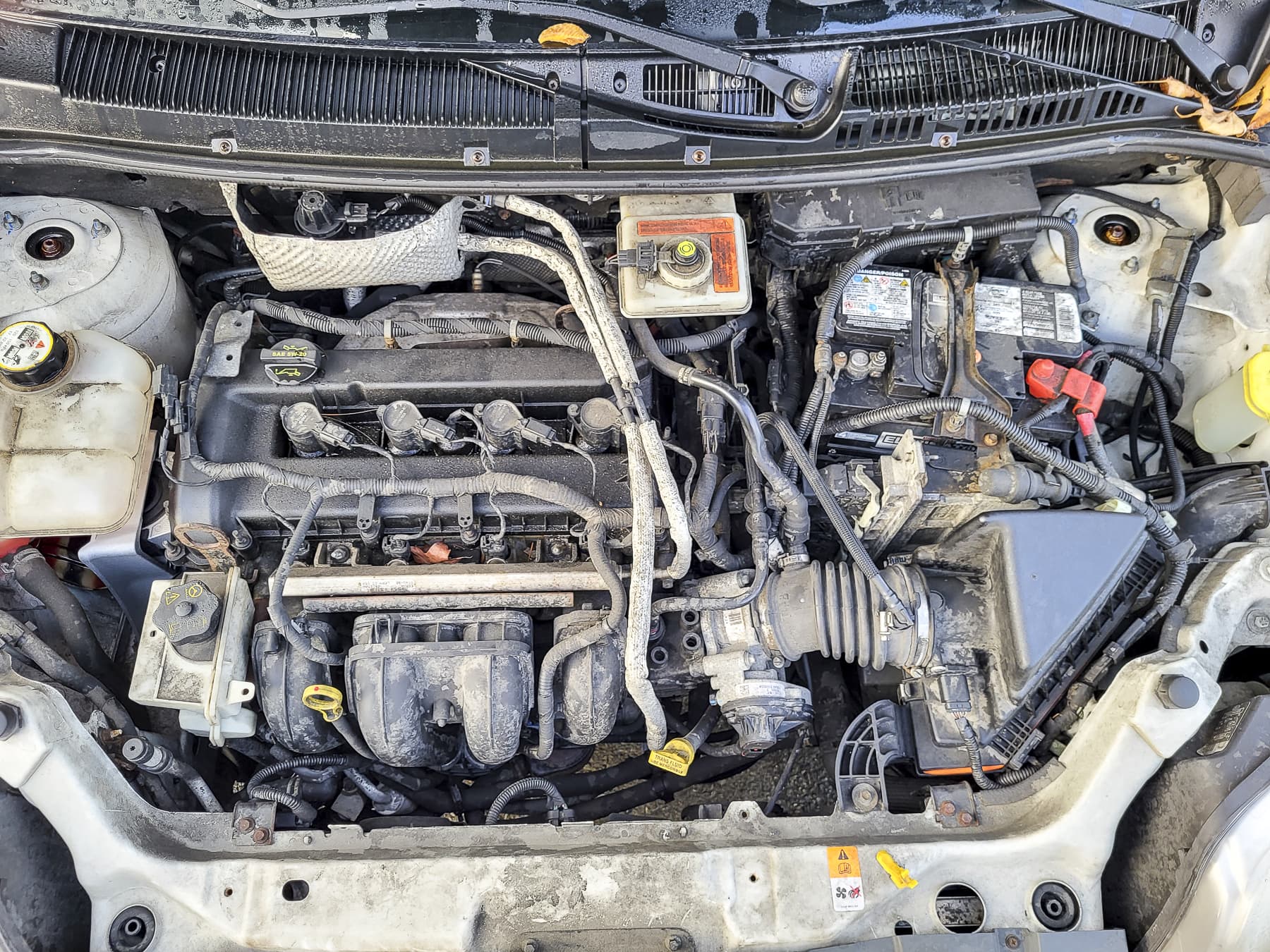 And I have a little closer view of that engine mount which is located right there underneath the coolant expansion tank. So that obviously needs to be removed to get at the mount. And this is the kind of the thing, you basically need to access things to remove the mounts and support the engine. Cuz of course that's what holds the engine and transmission up into the frame of the car. So if you just unbolt it, the engine will drop. And you don't want that or the transmission. 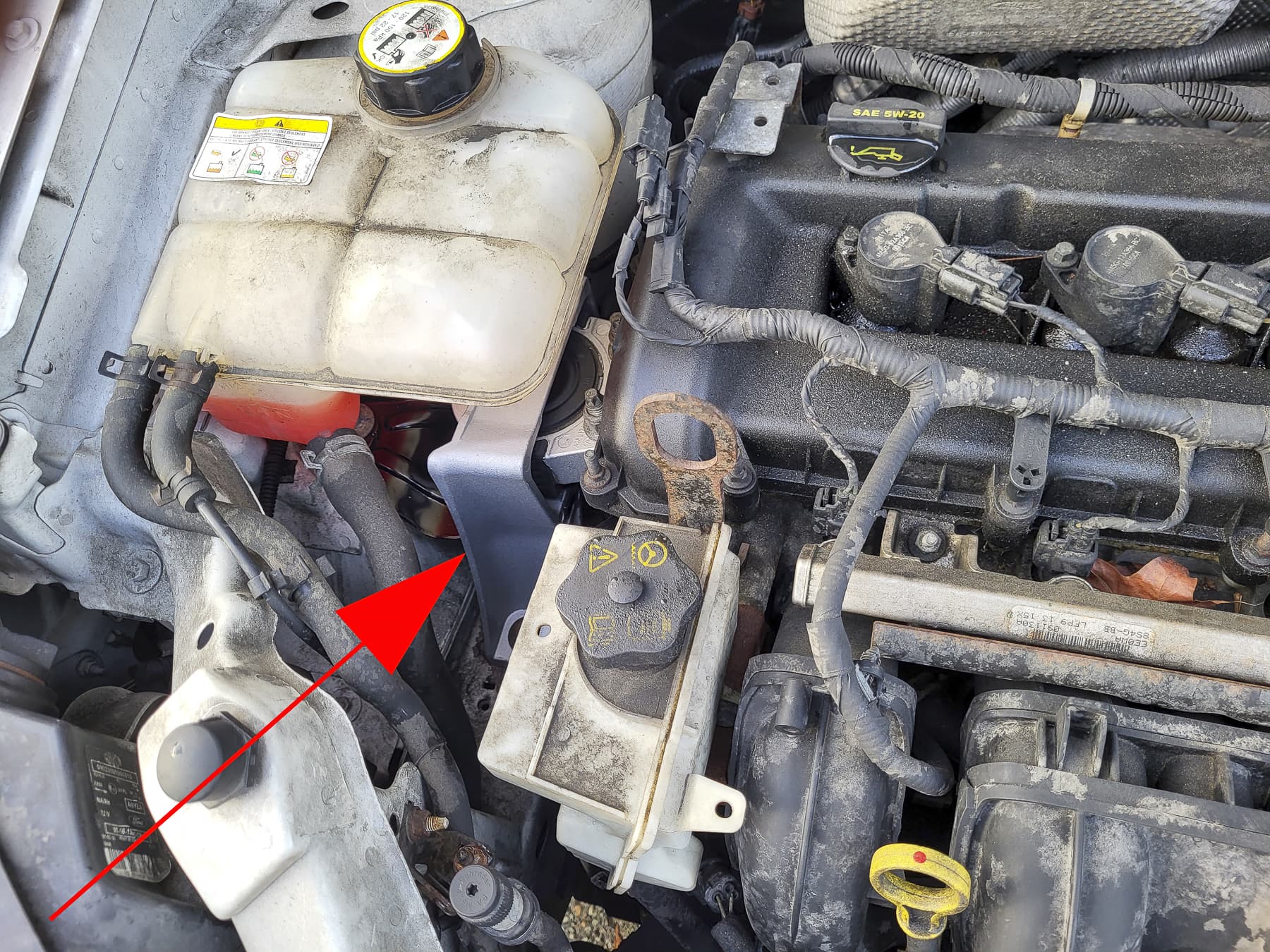 Let's have a look at the actual mounts themselves. So there are three mounts in this vehicle. This is the transmission mount. If you can see where the arrow's pointing, there's actually a crack in the rubber here. So this engine mount is basically made of steel and rubber. And this section here where again, I'm swirling the most pointer is the part that bolts to the transmission. This part here bolts to the frame of the vehicle and the rubber is there to isolate the vibrations. 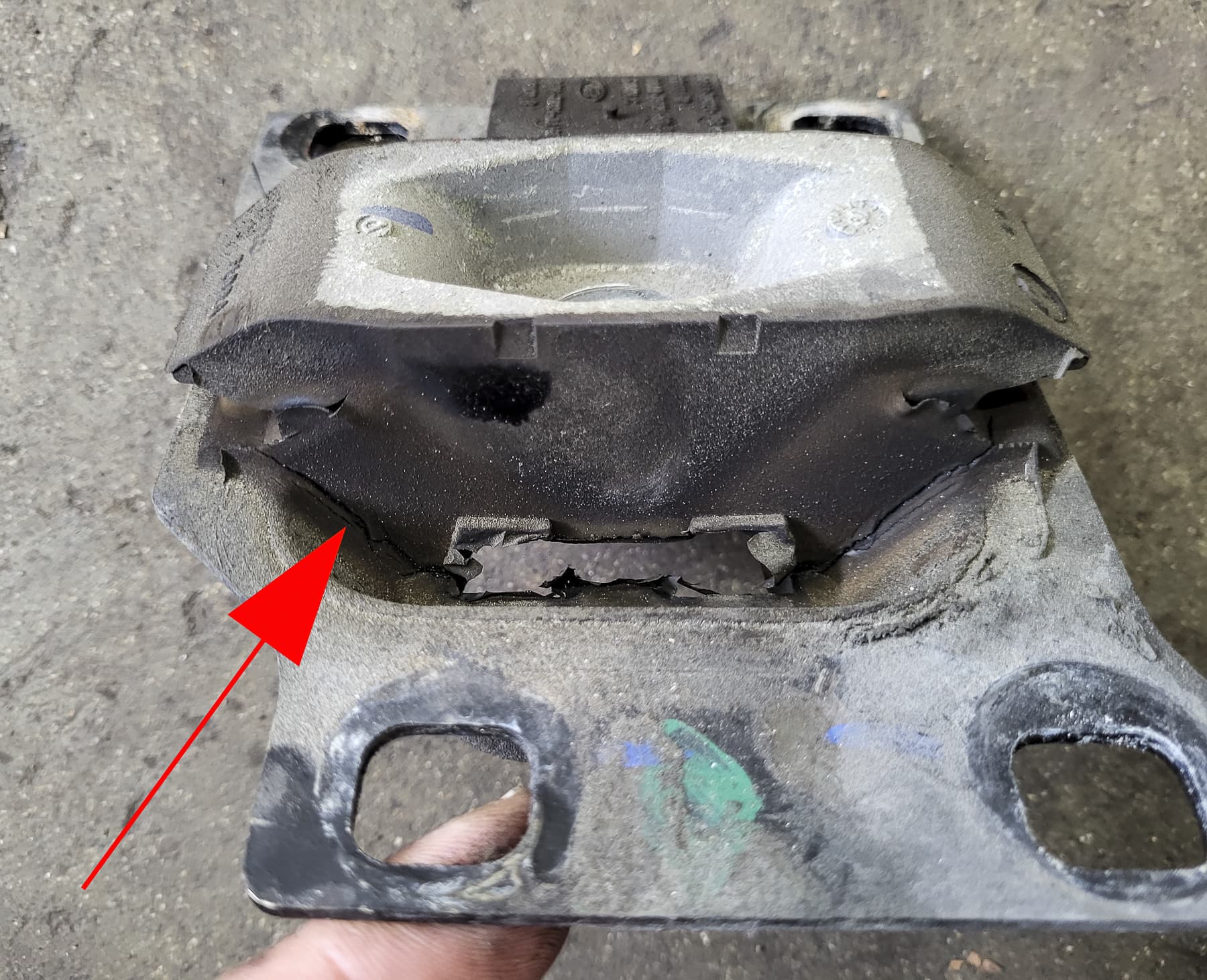 The next mount and actually here is there another view, this is the main engine mount. This is the one that I showed that's under the coolant overflow bottle. And this particular here is actually an oil filled mount. It's a cushioned oil filled mount. You can see the rubber's torn here. The oil is leaked out. There's actually a puddle on the ground where we had the engine mount lying on the ground before I took a picture, and there's like a puddle of black oil underneath. 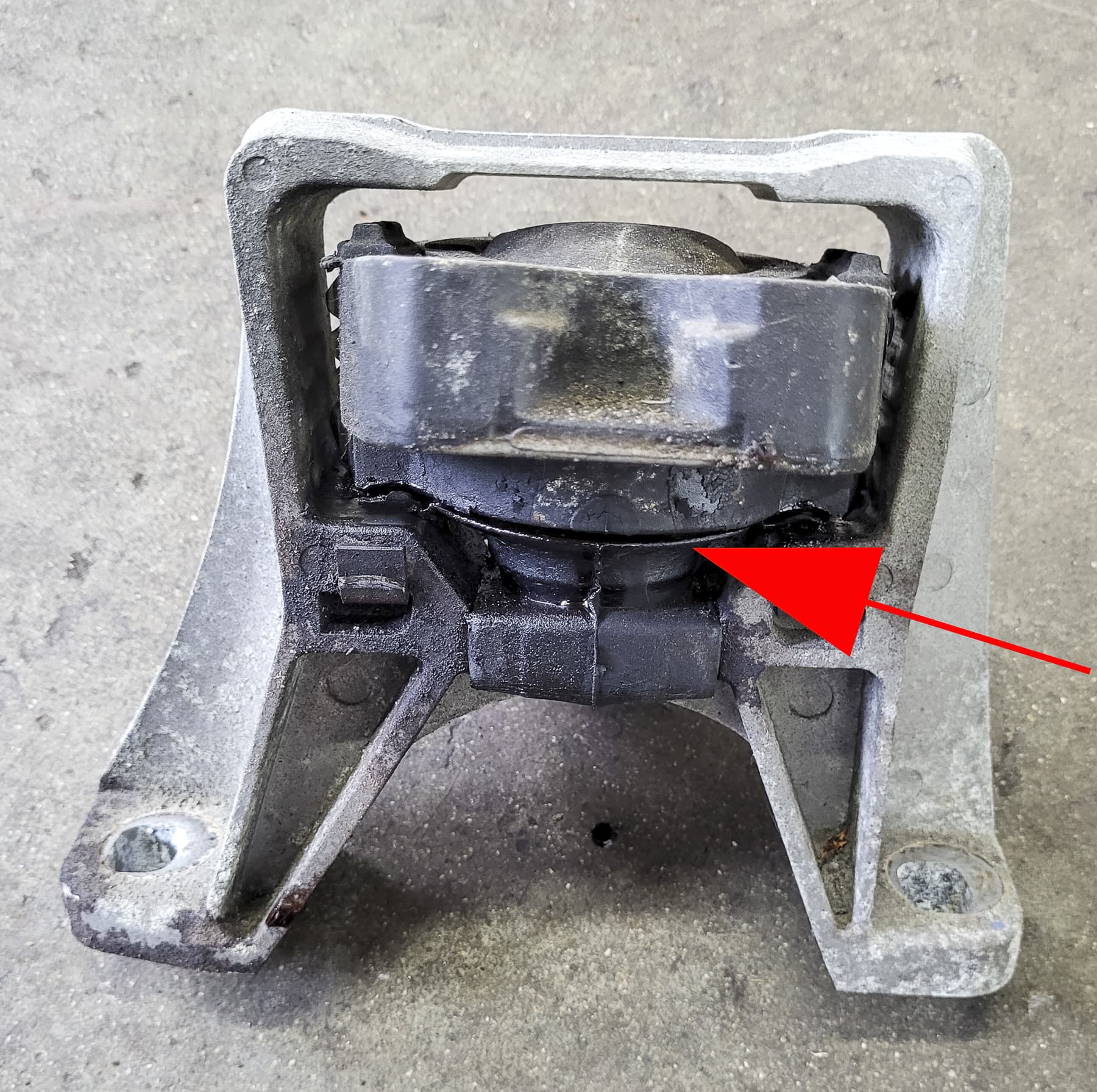 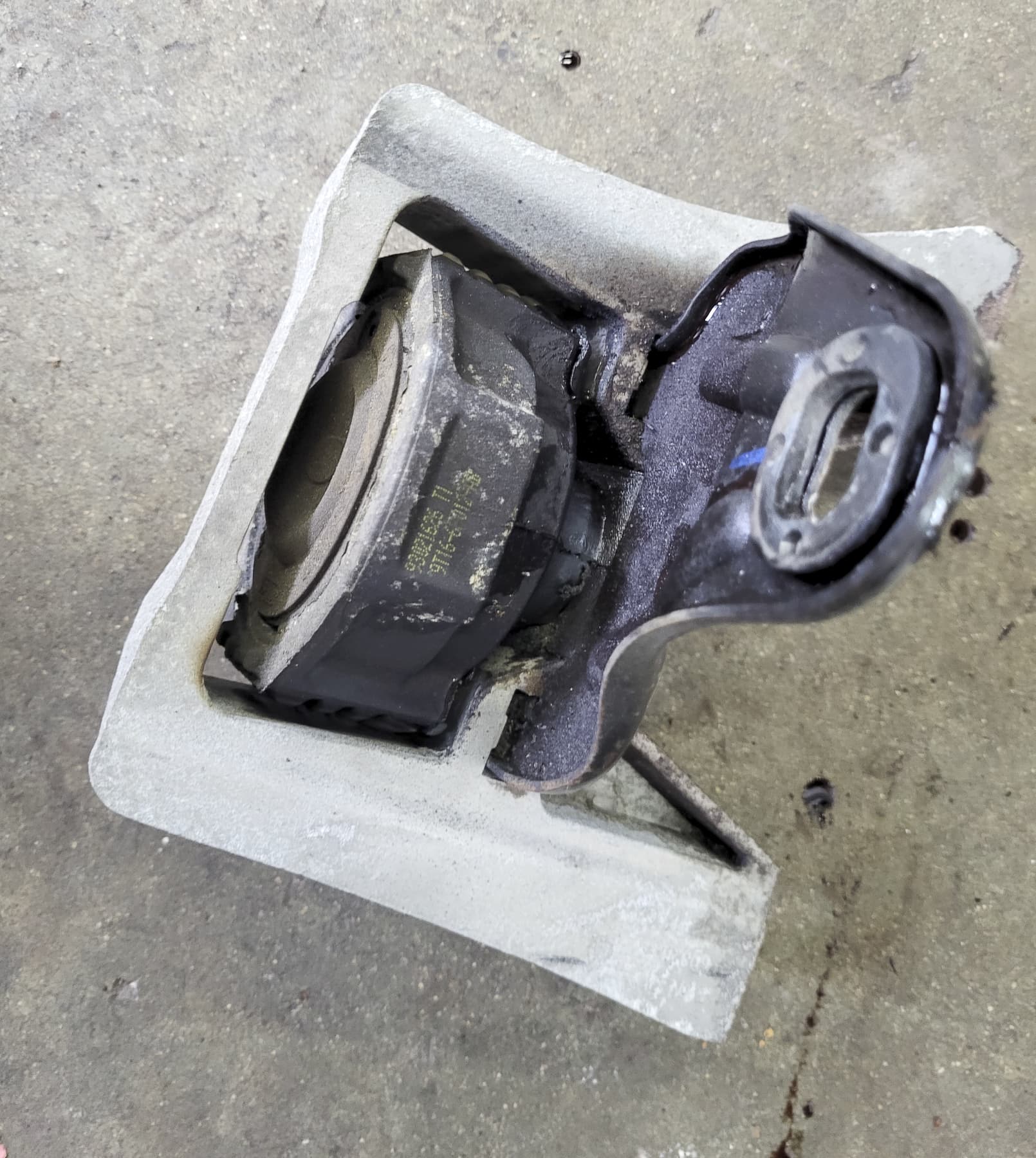 This is another view of the transmission mount. Just looking on top again, you can see the four mounting bolts to the frame and the one big bolt that goes through to the transmission. 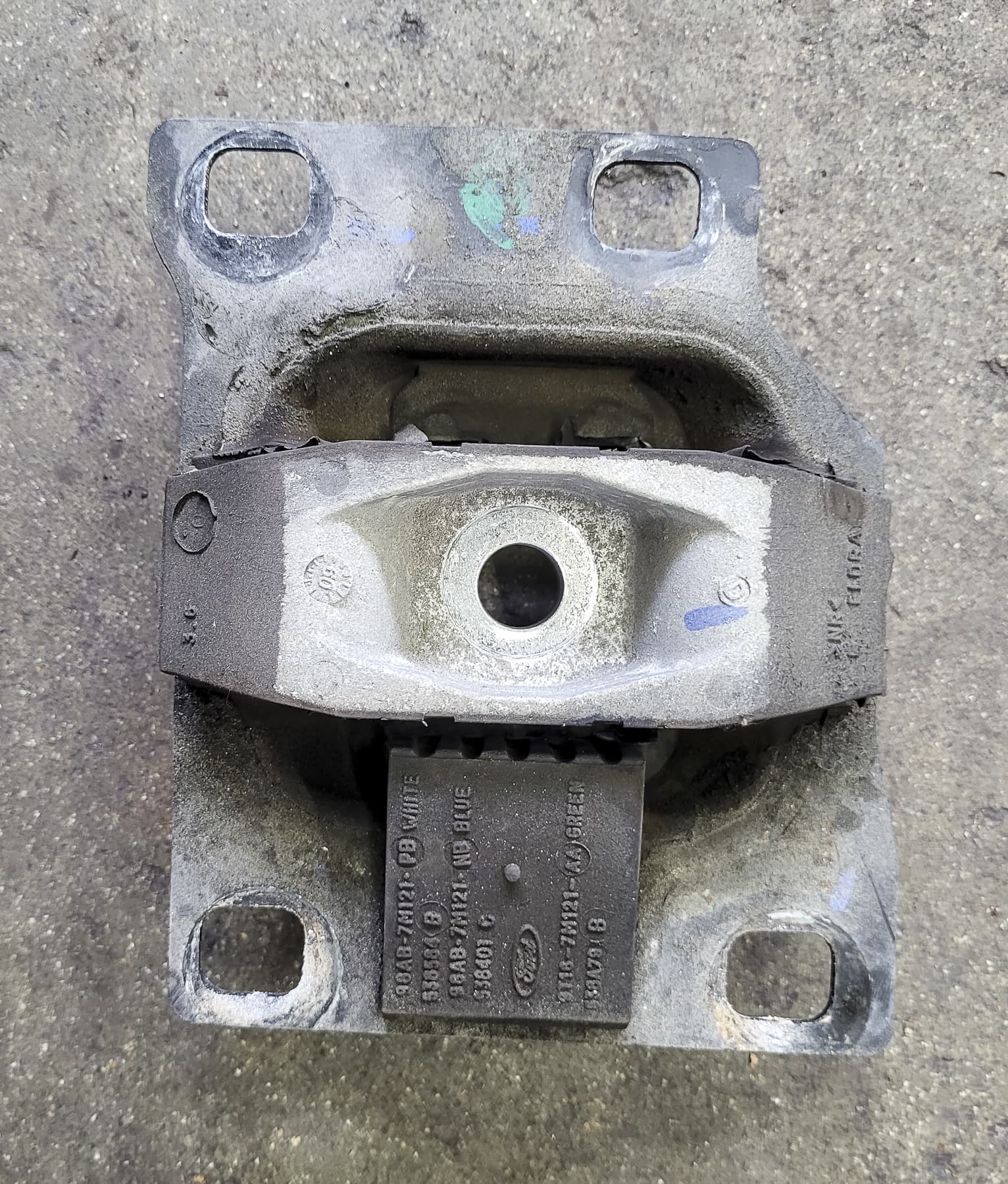 And then finally we have, this is more like a torque mount. So those top two mounts keep the engine transmission held in place. And of course, you know, the engine will torque and twist and this is the torque mount which is usually located at the bottom. Every vehicle's different, but this vehicle uses three mounts to hold it in place. This is often referred to as a dog bone too, and you can kind of see it has kind of a shape of a bone. If you can use your imagination a little bit. 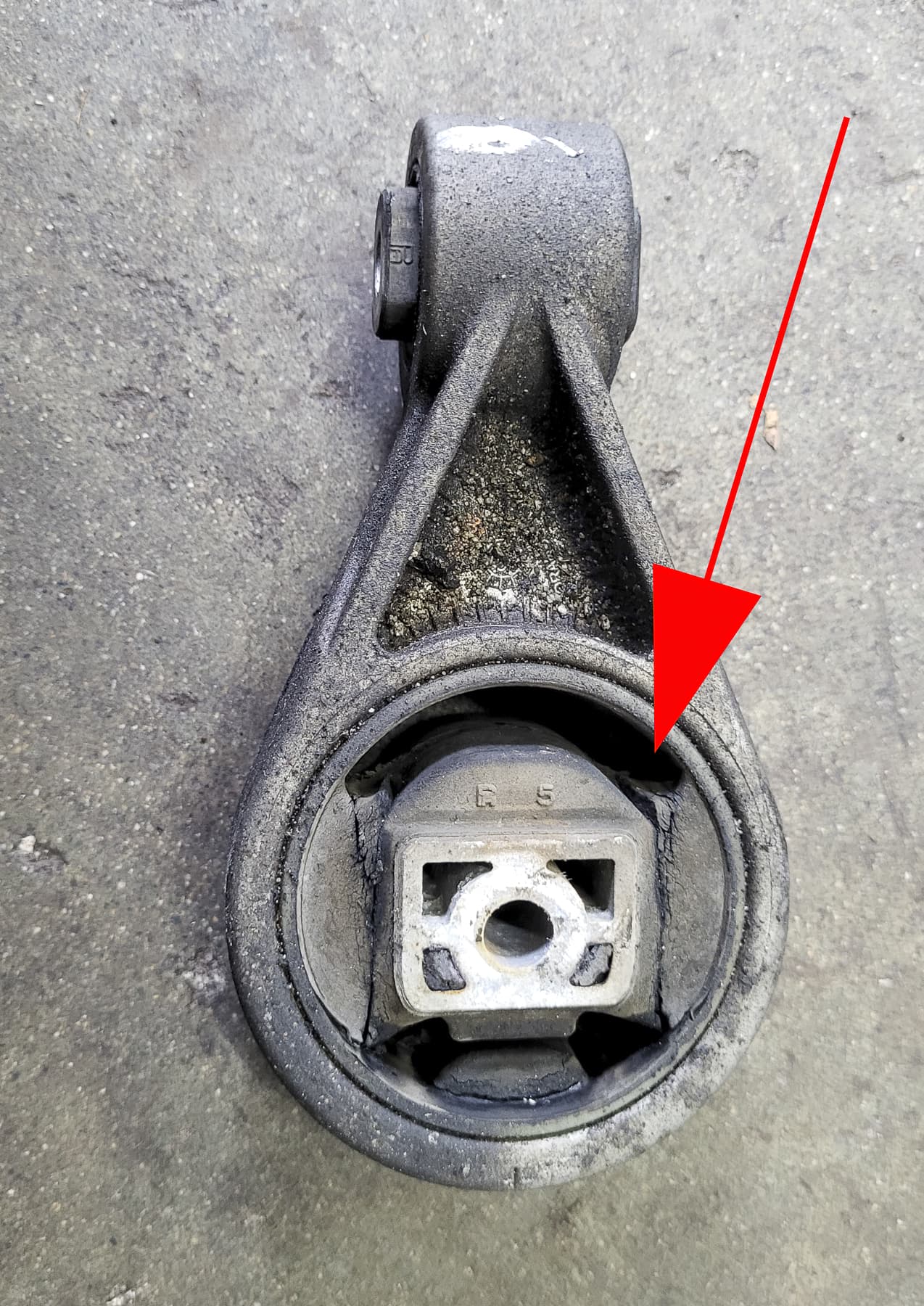 But anyways this part here will bolt either to the engine or the frame of the vehicle and the other end again, either to the frame or the engine. And you can see this rubber here is cracked. So this mount, of course, when it's twisting, it's supposed to be all intact, this rubber here, but it's cracked so it'll shift around and vibrate and cause a lot of excess movement. And that's the pics.

Mark: So the mounts are made outta different materials depending on where they're located in the vehicle? And I guess by manufacturer too.

Bernie: Exactly. And the common denominator with almost any engine mount is there's a metal section and there's a rubber section. The simplest engine mounts, if you look in old, like, you know, it's 1960s, 70s cars, traditional v8. There's one slab of metal with a stud on one side, big, thick, fat, wad of rubber, and then another metal piece with a stud on the other side. And that kind of holds the engine together, kind of generally works pretty good.

I mean, these mounts you can see they're the same way, but then they get a little more sophisticated. Some of 'em, they actually put an oil filled cushioning inside the mount and that helps further reduce vibration. Some engine mounts, actually BMW, a little while ago, it actually has a vacuum hose attached to it, and I haven't figured out how this thing works, but it'll actually control the cushioning of the mount somehow with engine vacuum. There's a solenoid, it'll actually actuate something inside the engine mount.

And then there's others I've seen that actually have wires attached to them. So there's some kind of electronic component to the mount. I haven't really researched it enough. I just sometimes go, Wow, you know, wasn't a rubber cushion with metal good enough. But I guess it's not. And you know, really with a lot of modern vehicles, when an engine's running, a lot of times you can't even feel it. It's so smooth and so it's a lot of this technology that helps to make that happen. But when it goes bad like it did on this van, it sure is an uncomfortable feeling to drive.

Mark: And how often are these changed? Is this a common repair?

Bernie: Well this technology on this Transit van is very similar to a Mazda front wheel drive. I'm pretty sure there's a Mazda van somewhere on this planet that maybe not sold in North America that uses the same engine technology. Ford Mazda drive train technology. And these mounts, especially that engine mount, they fail very frequently. Mazda 3s have them Some vehicles the mounts tend to go bad quite often. Other engines, they last a long, long, long time. You may never change them. So it really depends on each individual vehicle.

The design on these is kind of like if you own one of these Transit vans, you'll be changing 'em if you keep it, it's a 2010, so what'd that make it, 12 years old? You know, you keep the van for 15 years, you'll change engine mounts at some point.

Mark: So how are these Transit vans for reliability, otherwise?

Mark: If you're looking for service for your Ford Transit van or your Ford product, or your Mazda product, come and see the experts at Pawlik Automotive in Vancouver, BC Canada. You can reach them at their website, pawlikautomotive.com, and you can book right there. Or you can phone them (604) 327-7112 to book your appointment. You have to call and book or book online. They're busy, always. So let 'em know and they'll be ready for you. Thanks so much for watching and listening. We really appreciate it. Thanks, Bernie.

Bernie: Thank you, Mark. And thank you again for watching.