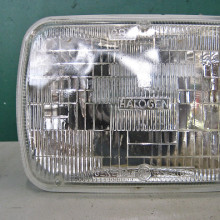 Last week we serviced two 1990’s vintage vehicles with burned out sealed beam headlights and it occurred to me that this is yet another technology that has almost disappeared. Most every modern car has a moulded headlamp assembly with small replaceable bulbs.

Sealed beam headlights debuted on cars in the 1940s. For many years they were round but in later years rectangular became the shape of choice. As they evolved they became brighter especially with the introduction of halogen bulb technology.

It is always interesting to see the evolution of automotive components: with the sealed beam headlight, the waste and sometimes complex replacement procedure is not missed. 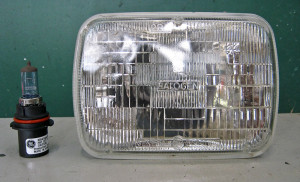 Compare the size of the new bulb to the old sealed beam. It is a prime example of less waste!