Friday’s featured service is a Mercedes-Benz Repair performed on a 2003 SL500. It includes diagnosis and replacement of the starter battery fuse. This beautiful hardtop convertible was brought to us by a client from Richmond BC.

Mercedes-Benz vehicles, like many German cars are extremely complex, and the SL500 takes this to a whole new level. The car is loaded with amazing features like active body control, electronic stability programing and a hardtop convertible. There are numerous additional features found in most other high-end car like ABS brakes, tilt and telescope steering, memory power seats and a  fabulous stereo. This SL500 also features a keyless go card with push button start and a navigation system. These features are common in many cars built in the last 5 years, however in 2003 they were cutting-edge.

Along with all this technology and luxury comes expensive repairs. Our featured vehicle was suffering from the starter battery going dead and a red warning lamp illuminating the dash. Diagnostic tests found the cause to be a blown starter battery fuse. What had likely happened was that the car needed a jump start and the battery cables were hooked up backwards: a bad scenario on any vehicle. This Mercedes was fortunately fuse protected. An older Alfa Romeo that we serviced a couple of months ago was not so lucky when the owner connected a battery backwards and melted a large portion of the car’s wiring harness and destroyed the alternator.

Once we had determined that the cause was the starter battery fuse we had to locate and replace it. This proved a difficult task as there was no mention in the owner’s manual as to it’s existence, let alone its location. Our state of the art repair information was equally unhelpful in finding the location until, through intensive searching on the internet, we found the name of the fuse. It’s referred to as “Fuse through-plating” which makes no sense at all. When we went to order the part from the Mercedes dealer we had to similarly educate them on the parts location and what it was. Perhaps the most frustrating issue that we encounter when performing Mercedes-Benz Repairs and Diagnostics is interpreting the repair info: it’s very cryptic. 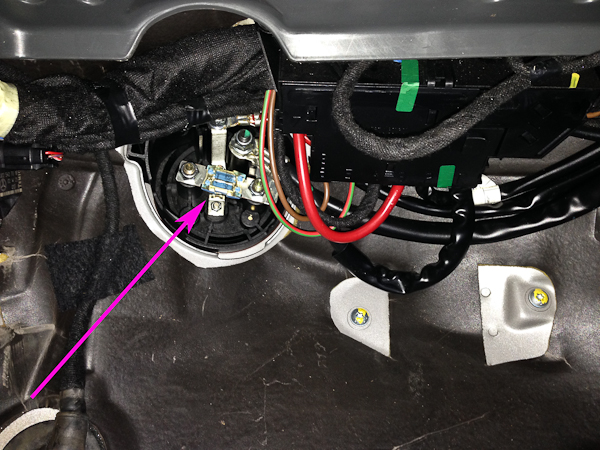 The “fuse through-plating” fuse panel, shown after the passenger’s footwell area components were removed. The arrow points to the starter battery fuse which sits below the 200 amp main power fuse.

Once we had found the proper repair information we located the fuse which is buried in the passenger’s footwell below the carpets, foam covers, metal cover plate and the sub-woofer: lots to remove just to get at a fuse. Once it was replaced the warning lamp went out and the starter battery received a full charge from the alternator. This car uses 2 batteries: one to start the engine and the other battery to power everything else.

For more about the Mercedes-Benz SL500 click this link http://en.wikipedia.org/wiki/Mercedes-Benz_SL-Class