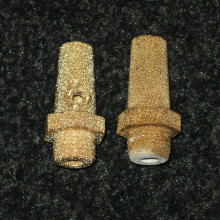 Among the many luxuries of the Range Rover is its air suspension system which is immensely useful for allowing this truck to ride low and safely at high speeds, and yet with the push of a button to gain a few inches of ground clearance for slow speeds on rough roads. Over the years we have serviced air suspension systems on many vehicles including Subaru, Lincoln, Cadillac and Range Rover. Undoubtly, air suspension adds complexity to a vehicle and with that complexity comes more repairs. Often these repairs are very costly with the air spring or strut costing into a thousand dollars per corner and the compressor assembly in the hundreds to thousand dollar range.

Recently we came across a refreshingly inexpensive air suspension repair on a 2006 Range Rover HSE. An air suspension failure warning appeared on the dash and the system became inoperative: stuck in the high ground clearance position. With scan tool attached we found a trouble code indicating a blockage in the air suspension exhaust system. Further diagnose found the cause of the concern: a plugged air compressor muffler. With the muffler plugged, the system could not vent the air from the springs and lower the vehicle! 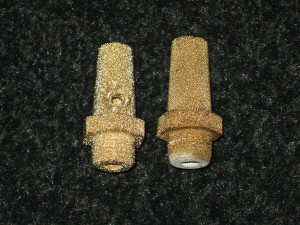 The muffler’s function is to quieten the air flowing in and out of the compressor and over time this one had plugged. After replacing the muffler along with an updated dryer assembly to prevent future failures, the system functioned normally. Diagnosing the Range Rover is a real treat when compared to many of the older generation air suspension systems. The Range Rover features a comprehensive series of trouble codes to help pin point areas of concern along with excellent scan tool data readings of all components. This is in contrast to systems found 10 to 20 years ago on Subaru, Lincoln & Cadillac which had no scan tool data and perhaps a few basic trouble codes.

Is air suspension worthwhile? I can answer it this way: yes it costs more to repair but it is unbeatable for giving a vehicle the versatility to ride level under all load conditions and if so designed, to give a vehicle like the Range Rover the best of both worlds: a comfortable to drive city/highway cruiser and a serious, high clearance off-road vehicle.