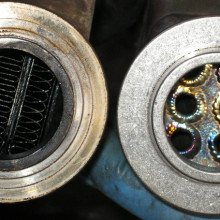 A high failure part on the Ford 6 Liter diesel is the EGR cooler. Due to a poor design this part will, when it fails, cause coolant loss and a smoking engine.

Replacing the cooler can be done with either the original Ford part, with a number of aftermarket coolers and the system can even be removed with an EGR delete kit.

Pluses and minuses for each are: The Ford cooler will solve the concern but will likely fail again in a few years. Several aftermarket coolers are available which are redesigned to prevent future failures: pricewise they are very comparable with the OEM part however they are usually a special order item.

As a third option there are EGR delete kits available. While these are well developed and frequently used, concerns can arise with excessive exhaust emissions and possibly the check engine lamp coming on.

We have had great success with the “Bulletproof EGR Cooler”. As the photo shows this part has been remade with more robust tubes so as to last a long time. This provides the best option between keeping the EGR system functional and eliminating one of Ford’s 6.0 Liter diesel chronic defects. 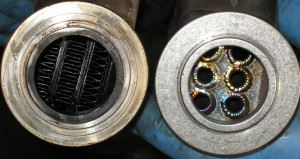