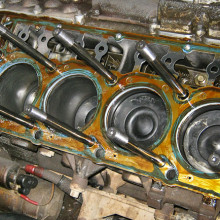 The Ford 6 litre Powerstroke diesel has a few chronic problems and one especially expensive concern is blown head gaskets.

While most diesel engines have bullet proof reliability this is an embarrassing failure for Ford. The great news is that it can be repaired and repaired more or less permanently by using studs instead of bolts to hold down the cylinder heads.

Diesel engines have tremendous combustion pressures which exert enormous forces on the cylinder head, the gasket and the bolts which hold them down. Over time these forces will cause the head gaskets to leak. Most diesels rarely experience this concern but with the Ford 6 litre diesel it is guaranteed to occur before 200,000 kilometers. The head bolts on this engine are simply inadequate to provide the long term clamping force needed to prevent the head gasket from failing.

Studs provide a far more solid clamping force to the cylinder head preventing the head gasket from future failures. When a bolt is tightened down it experiences two forces: one is a twisting force as the bolt is turned and the other is a stretching force along the length of the bolt. A stud and nut however experience only one force and that is the stretching force. This allows studs to exert a far greater clamping force than bolts. 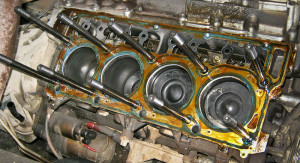