The Changes are Profound: What a Difference 3 Decades Makes- Pawlik Automotive Repair, Vancouver BC
0

The Changes are Profound: What a Difference 3 Decades Makes 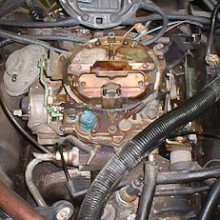 Recently I worked on a gem of a 1978 Chevy camper van that a client had acquired with only 60,000 original kilometers.

In many respects this vehicle was near new, at least it certainly ran like a new vehicle. When she mentioned a concern about how the engine revved excessively high when cold it got me to thinking about the way these and other vehicles used to be. Mostly it reminded me of a Chevy van that a close friend purchased brand new in 1981. I spent a lot of time driving in this van and serviced it for several years.

Though an excellent vehicle overall, there was a few irritating things about this van, most particularly the way it would rev excessively high when started. This happened cold when the choke was on and it stayed revving high for a couple of minutes until the choke could be kicked off. What was even more irritating was when the engine was restarted, even when hot: the choke would come on full again and the engine would rev like crazy for a couple of minutes.

Clearly, this was something that shouldn’t have happened. But that’s just the way the vehicle was designed and the choke on the carburetor was not adjustable.

The late 1970s to early 1980s was a rather difficult time for the US auto industry when many less than stellar products were produced.

The US government had legislated stricter emission standards and the manufacturers were still stuck with old technology: engines with inefficient combustion designs and carburetors that delivered fuel in an imprecise manner. Only so much could be done with these outdated technologies. Many systems were added to improve emissions: catalytic converters, EGR valves and air injection systems. While none of these additions were particularly bad, and all vehicles of today use some or all of these additions, they were often installed without much consideration for overall engine operation and created a great deal of underhood clutter. This brings me to the next complaint about this era of Chevy van: they were horrible to work on. With the engine cover removed there was a sea of pipes for the air injection system which made accessing spark plugs difficult and servicing valve cover gaskets, once a simple job on a Chevy, very time consuming. Many feet of vacuum hose ran overtop of the engine to actuate various emission control items on the carburetor, the EGR valve, hot air intake system and so on.

In all fairness, many vehicles of this era, both American and Japanese, had this added complexity. Thankfully within a decade and a half, by the mid to late 1990’s things had changed for the better.

The carburetor was extinct, replaced by the precision of fuel injection.

The bottom line is that we no longer have to put up with engines that rev too high at certain times. We can hop into our car, drive it at any engine temperature and it performs at 100%. Engine compartments are still very tight and complex but all components are meaningfully installed and the complexity has come by way of additional camshafts, multiple valves per cylinder and variable intake runners. All of these have helped improve exhaust emissions while maximizing horsepower and performance.

Enjoy our new technology, we really have come a long way!