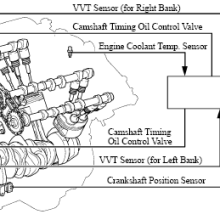 While this technology has been used on car and truck engines for a decade now, repairs to these components are becoming more common in our shop.

Variable valve timing allows the engines camshaft(s) to change their timing with the crankshaft and this allows the valves to open at the most opportune time for best exhaust emissions, engine power and fuel economy. Of course several additional parts are required to make this all work: this involves camshaft timing sensors, a solenoid(s), redesigned oil plumbing inside the engine and a cam gear which allows changes in timing. 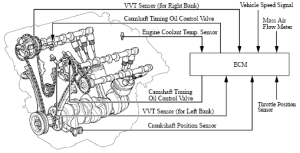 Among the most noticeable symptoms of VVT concern are a lack of engine power and poor performance.

If you are wondering what to do to prevent problems with these components the only thing that you can do is have your oil serviced regularly. These parts, mostly electronic will wear out on their own time schedule.