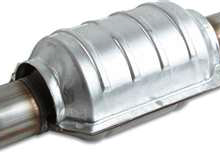 Catalytic converters fail for many reasons and the consequence of failure can cause several things to occur including a failed AirCare emission test, a check engine lamp warning, rattles under your car and poor engine performance. 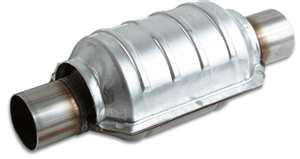 Let’s look at what your catalytic converter is, what it does and what causes it to fail.

Catalytic converters use a catalyst to transform harmful carbon monoxide, hydrocarbon and oxides of nitrogen emissions in your engine’s exhaust into carbon dioxide and water. The catalyst consists of a combination of precious metals: platinum, palladium and rhodium. When the hot exhaust passes these elements a chemical transformation occurs.

The precious metal catalyst is bonded onto a very fine ‘honeycomb’ grid which sits inside the converter housing. It is a simple structure with no moving parts and only requires the heat of the exhaust and the right exhaust gas mixture to operate. 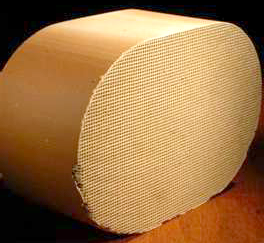 Inside the catalytic converter: the "honeycomb" substrate

Catalytic converter failures occur in several ways: First, impact failures which can occur if the unit is hit, often involving running over something. Second, thermal shocks which can occur if the unit is suddenly cooled. A likely cause would be going over a puddle in cold winter weather and the hot converter receiving an intense dousing of cold water. Third cause of failure is poisoning of the catalyst which can come from several sources: use of leaded gasoline (very rare these days); antifreeze entering the unit likely through a blown head gasket or other internal engine coolant leak; use of improper silicone gasket sealers; and use of oil additives which contain zinc. Fourth, is coating of the substrate: this is the honeycomb structure with the catalyst. This can occur from excessive carbon deposits and/or excessive engine oil consumption. Fifth and final cause of failure is overheating of the catalyst and this usually occurs from too rich a fuel mixture and/or engine misfire.

Do Catalytic Converters Simply Wear Out?

While all manufacturers seem to claim that they don’t and that they last the life of the car, it simply isn’t true. Many cars experience early failure due to a substandard size or quality of converter. Aftermarket replacements, always much cheaper than the original manufacturer’s part, are usually inferior in quality.

There are various grades of aftermarket converters. Here, you truly get what you pay for as the cheap ones often fail quickly whereas the good quality aftermarket units usually give years of great service. This is why we always recommend high quality units.

As a conscientious car owner looking to maximize catalytic converter life the best thing that you can do is to maintain your car meticulously and always address any check engine lamp concerns, correct rough running and misfiring engines or any performance issues. Failure to do so will result in you buying new catalytic converter(s) sooner than necessary and these are, by the way, normally very expensive to replace!