A 1997 Toyota Celica Timing Belt Replacement, brought to us by a client from Mount Pleasant, Vancouver is Thursday’s featured repair.

This Celica arrived at our shop via tow truck. The engine had suddenly stopped running. A short diagnosis confirmed a broken timing belt.

On many engines a broken timing belt is a disastrous occurrence: this is because the pistons and valves collide causing very costly internal engine damage. On this year of Celica, and for most Toyotas of this vintage, this engine damage will not occur.

Timing belt replacement is recommended every 96,000 kilometers on the 1997 Celica. This car had over 250,000 kilometers when towed in. The belt had certainly been changed once before, perhaps twice.

The Celica is a great car. Sporty, stylish and featuring legendary Toyota reliability.

For more information on the Toyota Celica click here http://en.wikipedia.org/wiki/Toyota_Celica

For more about timing belts click here http://en.wikipedia.org/wiki/Timing_belt_%28camshaft%29   This article shows the consequences of a broken belt in an interference engine. 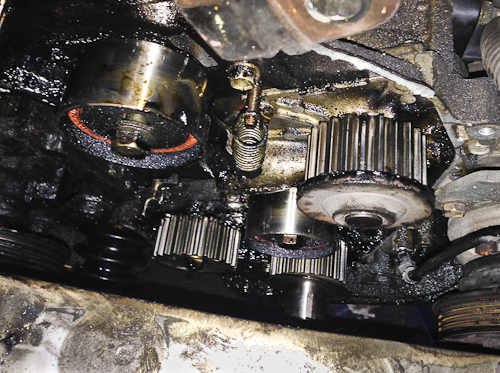 Timing belt area with belt removed: note the oil all over the pulleys from leaking oil seals. Oil like this causes the timing belt to break as this one did