Tuesday’s featured service is Timing Chain Replacement on a 2002 Acura RSX, brought to us by a client from Yaletown, Vancouver. Timing chains are designed to last the life of your engine, at least that’s the theory. In reality they often fail at what seems to be a premature mileage.

Failure of the timing chain can be catastrophic if pistons and valves collide. Fortunately, there is usually ample warning with rattling noises (see our recent engine replacement article done on a Ford Explorer with a noisy timing chain).

This 2002 Acura RSX also gave an early warning but it was not noise: the engine suddenly wouldn’t idle and the check engine lamp came on.

As always, we start with diagnosis. When the check engine light comes on it always stores a trouble code which gives us a clue as to where the fault lies. In this case it was a code P0341 (Variable valve timing phase gap).  The common cause of this code, on this vehicle, is a timing chain that has jumped a tooth.

Delving further into our tests we found out that this is a fairly common issue on this engine; so much so that Acura has written a “ServiceNews Article” (It’s a nice way to say Technical Service Bulletin).

In the ServiceNews Article we noted something that should be brought to everyone’s attention and that is: “A damaged or stretched cam chain, resulting from infrequent oil changes.” Lack of regular oil changes are the biggest killer of timing chains. It should be noted however, that they will occasionally fail even with good maintenance. 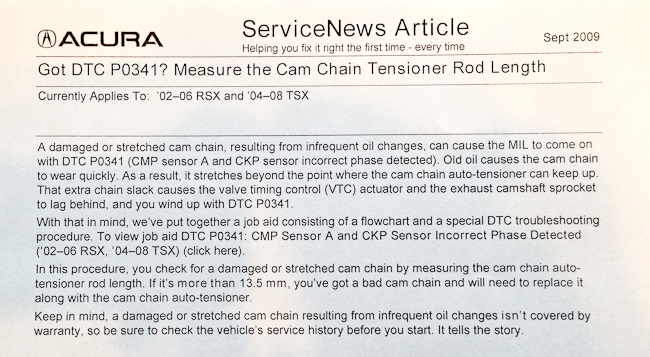 Upon taking our Acura RSX timing chain cover off we found that the exhaust cam was a couple of teeth out of place due to a stretched chain. The vehicle owner is lucky that the chain only skipped two teeth: several more teeth would have caused valves to collide with pistons and made for an incredibly expensive repair bill.

Once replaced, the chain was much tighter and the engine ran well.

If I can leave you with major point from this post it is: Change your oil regularly as this is critical to long timing chain life! 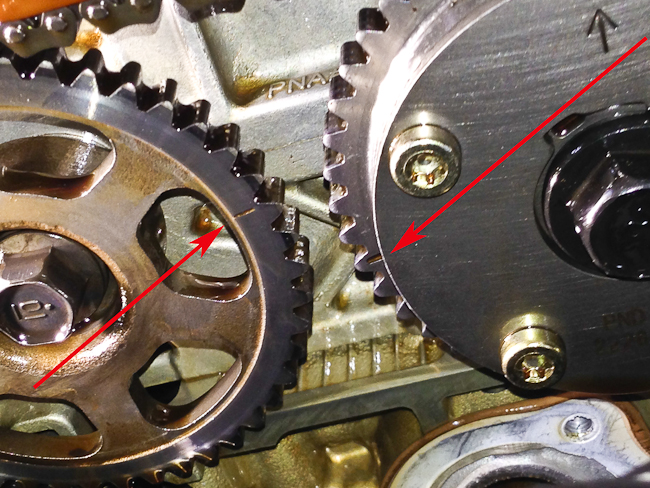 The two camshaft gears: intake on the left and exhaust on the right. The red arrows point to the timing marks. These are supposed to be facing each other but as you can see they don’t: the exhaust gear is sitting too low

For more about the Acura RSX click here http://en.wikipedia.org/wiki/Acura_rsx